Taking a look at SEC Conference mate and Border Rival Arkansas Razorbacks with help from Doc Harper from ArkansasFight.com, HHKB Chris, & switzy227. All predictions on the upcoming season are based upon a Game-By-Game pick of the upcoming season instead of just ranking the teams, in hopes we would get a more interesting look at the team rankings.

In Clarke, Gulley and Wade the Razorbacks lost solid contributors who helped shape the foundation for what Mike Anderson is trying to accomplish in Fayetteville. Clarke was the bigger loss as he started a lot of games for the Hogs, but Gulley and Wade were both tough defenders who fit in as cogs in the Anderson system, and are mostly replaceable. Kikko Haydar, well… he was that guy that every team hates to play against. He flopped, and took charges, and then every once in a while he would drill a three pointer. He will not be missed. At least by the teams that had to play the Razorbacks.

If you are a Razorbacks fan, you had to be ecstatic when Bobby Portis said that he was coming back. If he would have declared, Portis would have likely been a 1st round draft pick. A supremely skilled forward, Portis can stretch the floor but is lethal on the block with his back to the basket. He has good court vision, and when the Razorbacks ran their offense through him, they were a much better team. Michael Qualls and Rashad Madden made strides last year at being more consistent offensively. Madden is a dangerous slasher, and Qualls is one of the best athletes in the SEC who finally found ways to impact the game last season. Those are the big three that are coming back, but one that’s just outside the list is Kingsley who was a highly regarded big man out of Huntington Prep, and was incredibly productive when he was on the court last year. If he sees more time on the court he’ll form a very tough frontcourt with Portis. 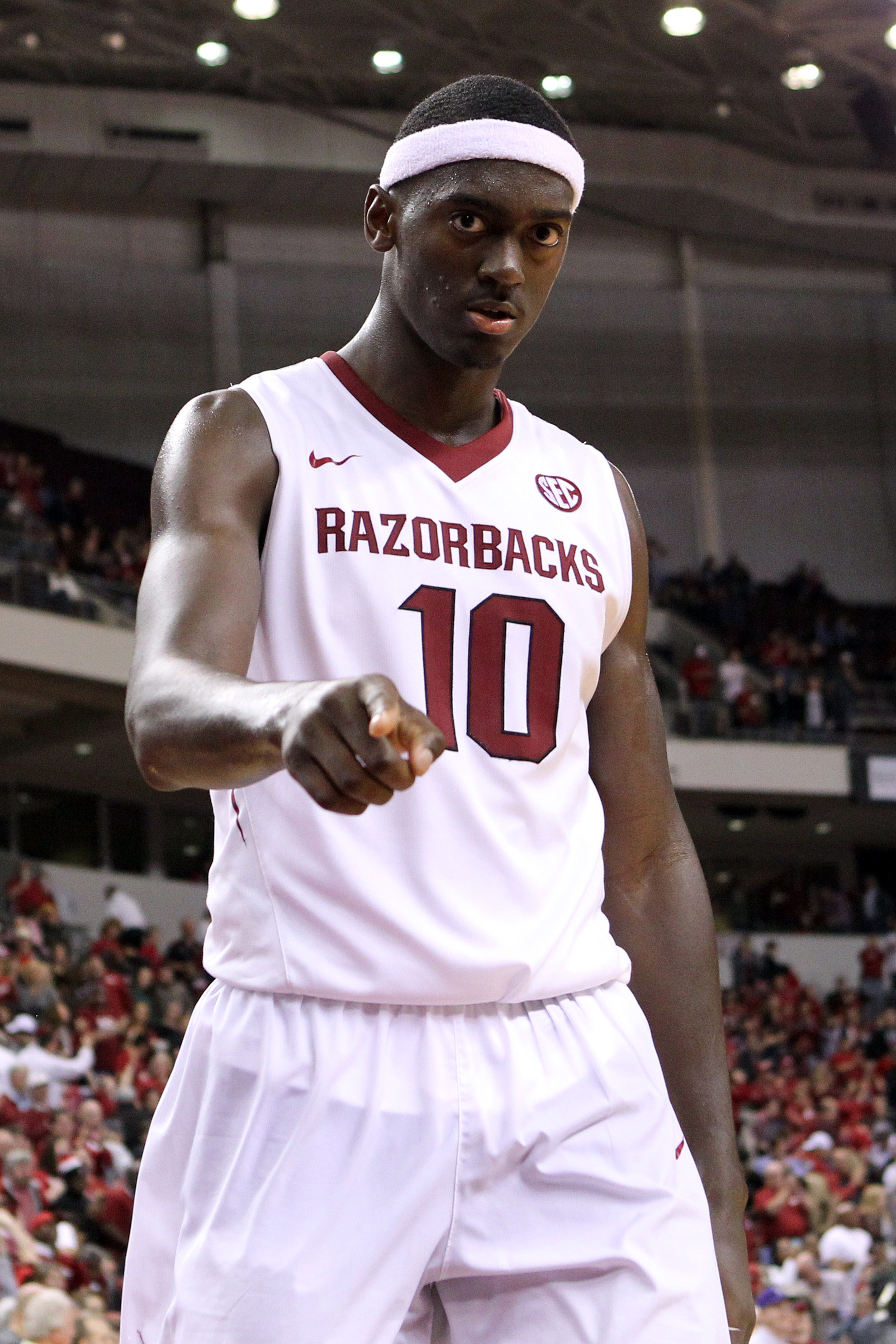 Portis came in as a highly touted 5-star forward and became a reliable player on the block for the Razorbacks over the course of the season. But most of the projections of a great season are based upon Portis taking the next step to being a dominant player. He needs to be upwards of about 18-19 ppg and close to 10 rebounds. If he hits those production levels the Razorbacks can be a scary team in the SEC and in the country. 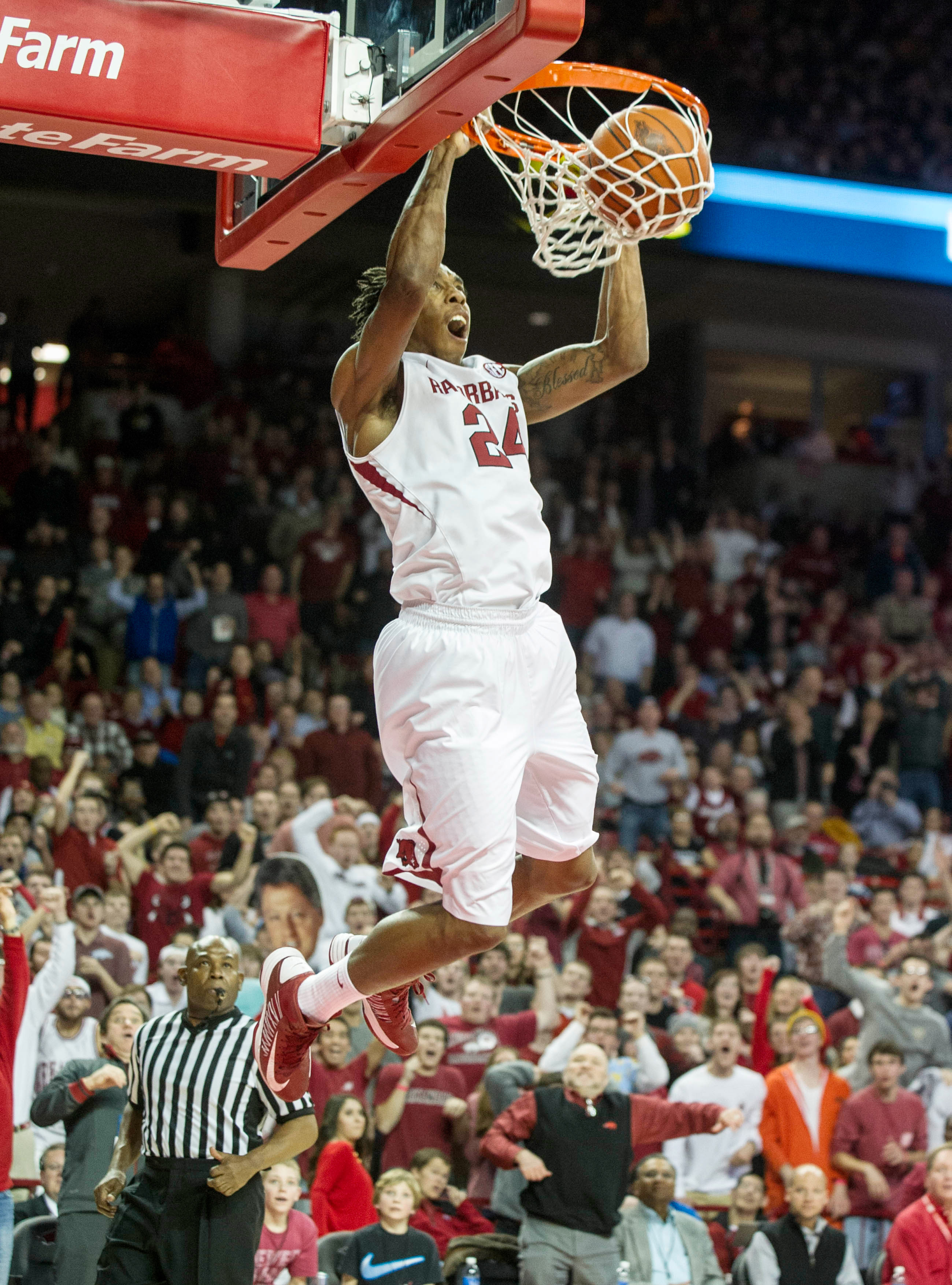 This was a tough call but I went with Qualls because he has the chance to become a big time player in the SEC this year. Qualls has always been explosive, but you could see the pieces start to fall last year as he rounded out his game. The more rounded out his game gets, the more dangerous the Razorbacks become. He could be the bellweather for whether or not the Hogs have turned the corner.

A pretty typical Mike Anderson recruiting class. A few fairly well thought of 3-star freshmen in Beard and Babb, a nice transfer in Keaton Miles, a sleeper in Thompson and a JUCO transfer in Durham. Beard should be a nice addition to the backcourt and give the Hogs the help they need at the point.

For Hog fans year three was supposed to be the year the Razorbacks returned to the NCAAs. It seemed almost certain they were in until a late season crash and burn at Alabama, followed up by a narrow loss to South Carolina in the SEC Tournament. The Mike Anderson meme of not being able to win road games bit Arkansas at the wrong time, and they got sent to the NIT.

The big one is that Bobby Portis is coming back to go with Rashad Madden and Michael Qualls, Arkansas should have experience, depth and talent.

With all that though, there are a lot of reasons to be optimistic about the future in Arkansas. The big one is that Bobby Portis is coming back to go with Rashad Madden and Michael Qualls, Arkansas should have experience, depth and talent. Not necessarily something that Anderson has enjoyed much since taking over 4 years ago. Just adding another year of experience for Portis will be a big key.

The biggest concern for the Razorbacks to overcome is the previously mentioned Anderson Road Game meme. Can he finally get his team to get over that hump of being able to win consistently on the road. That’s probably the difference between another 10-8 season, and a 14-4 season in conference. It’s very likely that they’ll still be a streaky scoring team, but just having Portis on the block, and Madden and Qualls attacking the rim, coupled with the rules still being in place from a year ago, those three combined should help them score more points with consistency. Madden ran the point last year out of necessity, but with the addition of Durham and Beard, Madden will be playing off the ball this year, which is much more natural for him.

Another question mark is power forward position. Coty Clarke was very reliable at this spot last year, and it’s unknown if Arkansas will start senior Alandise Harris, sophomore Moses Kingsley (who’s really more of another center with Portis) or Keaton Miles, who is closer to a Clarke-type of player. The ceiling for the Razorbacks is much higher if Kingsley wins the job starting with Portis, but Alandise Harris looks to probably start the season in that spot as a senior.

For the last few years the Razorbacks have had depth, but not a lot of talent. Just a lot of guys they could put in and out of the game with little to no drop off. The problem becomes that those players weren’t exactly great players. Just interchangable. And when Anderson teams have been at their best, they have the kind of talent where there are 4-6 really good players, and then the rest are guys that won’t hurt you. This team is the first team that Anderson has had in Fayetteville where I feel like their top 4 are really good, and they’ve got 4-5 other guys that won’t hurt them. Some of that hinges on Kingsley taking that next step, which I’m banking on.

If that’s the case, then it’s going to be a good year for Arkansas Hoops.

I don't know if the road game thing is still as big of a deal just because Arkansas did win three SEC road games last year, including at Kentucky. It will be a national meme for Anderson probably until he wins pretty big, unfortunately.

The big question I have for this team is, how effective will all the new guards be? The four guards who graduated certainly played important roles on the team, but in terms of production, none really filled up a box score. Arkansas will really be looking to rely on juco transfer Jabril Durham to lead the point so Ky Madden can move to 2-guard. Anton Beard is the most highly-rated of the incoming freshmen so Arkansas will need production from him as well.

Keaton Miles is a total mystery to me because he was not very productive at West Virginia. His stats won't wow anybody. He'll be a redshirt junior this season so it will be interesting to see what he can bring to the team. Many people say that Mike Anderson's high-speed pace is a much better fit than what they ran at West Virginias so hopefully he'll find a more natural role at Arkansas. With his size he'll be looked on to be similar to Coty Clarke last year, but those are relatively big shoes to fill.

The under-the-radar player I'm most excited about is Moses Kingsley. Kingsley was highly-rated out of high school but was very raw, but extremely athletic. That's why his athleticism numbers like rebounds and blocked shots were very good, but scoring was lacking. He did however begin to show real potential as a scorer late in the year, so I'm really excited to see what he can do this year. I wouldn't be surprised to see him starting with Portis by the end of the season, if not immediately.

Expectations this year are to make the NCAA Tournament. Anderson's not doing anything to temper expectations. Arkansas' home schedule is pretty favorable and they should have some chances to pull a road upset or two against some pretty good teams. It should be a fun year.

I'll keep the form open to be filled out until the SEC season starts. If you would like a nifty rankings image like you see above from Doc's picks, send me an email or tweet and I'll make it happen. You can also follow me on Twitter: