Taking a look at SEC Conference mate Kentucky Wildcats with help from Glenn Logan from ASeaOfBlue.com, HHKB Chris, & switzy227. All predictions on the upcoming season are based upon a Game-By-Game pick of the upcoming season instead of just ranking the teams, in hopes we would get a more interesting look at the team rankings.

The Kentucky Wildcats lost their top two scorers from a year ago, and a solid 4 year contributor in Jarrod Polson. Julius Randle and James Young were both great players, if not occasionally inconsistent as can be the case with freshmen. Polson was largely a non factor but was used as a steadying influence off the bench, and played a good mentor role for the young Wildcats.

It's pretty amazing what Kentucky has coming back this year, something that Calipari isn't really used to in the last few years. Both Harrison brothers are back for their sophomore years, and the year of experience should do a lot for the former McDonalds All-Americans. Alex Poythress has a chance to realize the potential he's flirted with since his arrival in Lexington. Dakari Johnson got better throughout the year, and an offeseason in the weight room to change his body should help a lot. Willie Cauley-Stein probably could have been a 1st round draft pick if he had left a year ago, instead he returns for his Junior season. And Marcus Lee hopes to expand on his coming out party in the Semi-Finals last year, when the announcers were suddenly surprised that a 5-star recruit is pretty good. So 5 former 5-star recruits return. The one 4-star could have been a 1st round pick. Dominique Hawkins is probably good enough to start on a lot of SEC Teams, and Derek Willis is former top 150 recruit who only got 3 minutes a game as a sophomore. Yep, Kentucky has a deep group of returning players. 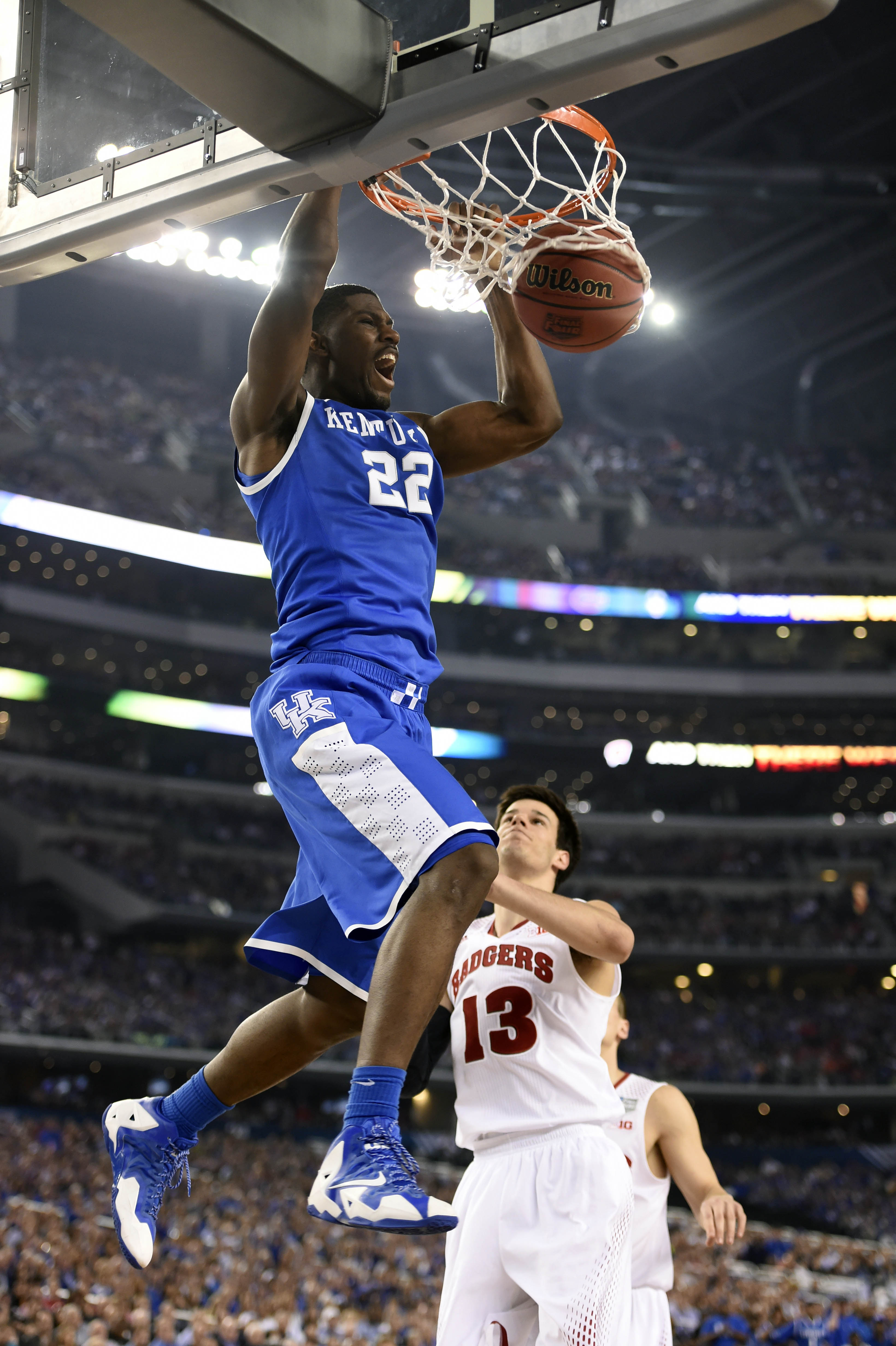 Take your pick really. I went with Poythress because I think few imagined that Poythress would still be wearing the Kentucky blue when he committed three years ago. But alas, here we are. Poythress struggled to really make his presence felt as he almost seemed okay with playing second fiddle to the other stars. But Poythress has a unique skill set amongst the Kentucky forwards. He can play both in and out but needs to show that he can be a factor from the perimeter as much as the block. If Poythress is playing that way, Kentucky's one weakness (wing depth) isn't that big of a weakness. 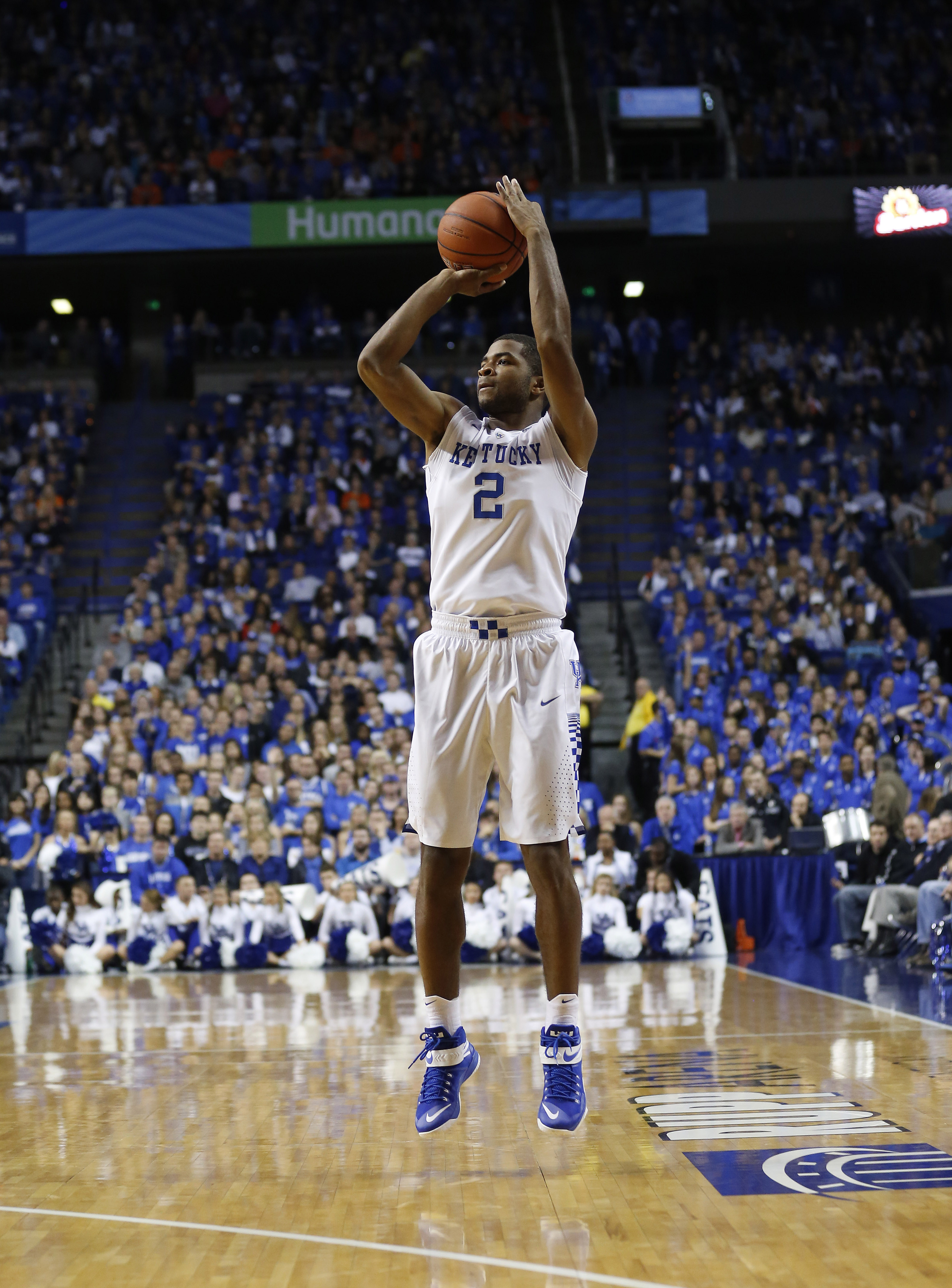 As much as anyone on Kentucky can fly under the radar, Aaron Harrison can. He hit huge shots for the Wildcats down the stretch last year and if he can continue that growth that he showed in the NCAA tournament Kentucky actually could threaten that 40-0 mark they talked about last year. 40-0 probably won’t happen, but if Harrison (along with his brother Andrew) plays with the consistency that he didn’t play with until late last year, the Wildcats are going to be dominant.

Something new for Kentucky, they did NOT finish number one overall in the recruiting rankings. That title went to Duke this year. Instead Kentucky finished a lowly second in the race. Many Mizzou fans might be familiar with Devin Booker as he’s the son of former Mizzou great Melvin Booker. Devin spurned his dad’s alma mater in favor of Kentucky and was Kentucky’s lowest rated recruit in the class. He would have been Mizzou’s highest ranked recruit in the class. This is just the state of affairs for Kentucky recruiting. Tyler Ulis is an exciting player to mix in with the overwhelming size of the UK roster. Trey Lyles is a talented Forward who can stretch the floor and has an NBA ready body. Karl Towns is the prize of the class who has drawn all kinds of comparisons, and some thought the best player in the entire 2015 class.

Kentucky was the top ranked team on everybody’s preseason list and they should have been. Everybody expected the Wildcats to suffer more losses from a team that underachieved for portions of the season before going on a long run to the championship game, but that didn’t happen. Only Julius Randle and James Young left early, leaving five players behind from the number one ranked recruiting class to return as Sophomores. Not only that but two players from the best recruiting class the year before are coming back also. Now add in the 4 freshman from the second ranked class and you have a pretty full roster of almost exclusively 5-star recruits.

[Calipari] may be a hotrod as a coach but players love him, and that will come in handy as he embarks on a season with the biggest of targets on their back.

Kentucky is the deepest most talented team in the country, their one rival in that might be Duke, but even Duke is going to have to rely on Freshman even more than the Wildcats. If there is any problem with this team its that they might be too talented, and playing time could become an issue for 11 guys who are used to playing a lot. If there is one guy who can pull this off though it’s John Calipari. He may be a hotrod as a coach but players love him, and that will come in handy as he embarks on a season with the biggest of targets on their back. That target will only get bigger with their recent slaughter of the 5th ranked Kansas Jayhawks.

In going with a platoon to start the season, Cal is basically telling his players that everybody is going to play (well, not Derek Willis or Dominique Hawkins, unless there is an injury). The Blue Platoon (listed as the 1st team on the depth chart) is giant. The Harrisons are both about 6'5", Poythress is 6'8", Towns and Cauley-Stein are hovering around the 7'0 mark. The White Platoon is younger, smaller (at the guard position) and likely more volatile, but still probably the second best team in the SEC. Where Calipari has won on the recruiting trail is convincing the top players that they'll get so much better in practice because of the high level of talent each and every day. He's shown them that playing 20 minutes at Kentucky will get you seen by more scouts than playing 35 minutes elsewhere. He has scouting combines for the NBA to come in and watch the players. Other schools just aren't the NBA factory that Kentucky has become. And now, with so many more players deciding to stay for another year, they just get deeper.

So yes, Kentucky’s biggest problem is that they might be too talented. They might have a problem finding enough minutes for a 5-star freshman power forward, or a 5-star sophomore center. It’s hard to tell at this point. The looming question for the Wildcats is whether they can put it all together night after night while wearing the biggest target in the country? I like their chances.

The biggest apparent weakness, which you addressed, is the lack of a "true" wing forward. However, Kentucky’s height in the backcourt with three guards at 6‘5" or better makes that almost a distinction without a difference. Poythress can guard the 3 spot, and if he’s too big, UK can swing Devin Booker or Aaron Harrison into that spot, which is pretty much what happened at Big Blue Bahamas. It would really help if Poythress could develop more of a perimeter game, but even if he doesn’t, the 3-spot isn’t really a problem because Kentucky can make up for it by having two rim defenders available.

For example, Trey Lyles can spot up on the perimeter, as can Karl-Anthony Towns. In fact, Towns might be one of the deadliest 3-point shooters on the team, although I don’t expect Kentucky to need that skill. It will be interesting to see if Willis can earn backup or even starters minutes at the three, since there seems to be some time available there, and he played it pretty well in the Bahamas.

Regarding talent, Calipari will play a two platoon system, like a hockey team — five-for-five substitutions. If Willis isn’t able to make an impact, Calipari may redshirt him, but I’m not positive about that. We don’t yet know for sure what the two teams will look like, and Calipari has suggested that they might change depending on the needs of the team, which is pretty terrifying if you think about it. Imagine the Harrison twins at guards (6‘6"), Trey Lyles at the 3 at 6‘10", Towns at the 4 at 6‘11" and either Dakari Johnson or Willie Cauley-Stein at the 5 at 7‘0". Even if you could beat Lyles off the bounce, you still have to navigate 2 shot blockers to get to the rim.

We think this year will be fun.

What’s better than have 5 McDonalds All Americans? All the McDonalds All Americans! Cal brings back a team (sans Mr. Randle) that was a few shots away from a National Championship and augments in the way that he does, through mind control. How else could you convince a kid to come in and guarantee only half the playing time? That’s not getting you to the league. But Cal has got a plan, a platoon system, switching out 5 at a time and potentially as often as lines in hockey are switched, it’s a brave new world people, and let’s be real, it’s probably gonna work and Kentucky is probably going to win the Conference and go deep in the NCAAs, but don’t let that deter you SEC brethren maybe they’ll get lost on the way to your arena and you can win by forfeit.

I'll keep the form open to be filled out until the SEC season starts. If you would like a nifty rankings image like you see above from Glenn's picks, send me an email or tweet and I'll make it happen. You can also follow me on Twitter: