Taking a look at SEC Conference-mate South Carolina Gamecocks, with help from ChickenHoops from GarnetAndBlackAttack.com, HHKB Chris, & switzy227. All predictions on the upcoming season are based upon a Game-By-Game pick of the upcoming season instead of just ranking the teams, in hopes we would get a more interesting look at the team rankings.

Breton Williams was the teams leading scorer last year so his contributions will be missed, and that undersells it a bit. At times, Williams was the only reliable offense for the Gamecocks. You hope that some of the youngsters will be able to find more consistency in Williams absence. Shaw and Ringer weren’t big contributors and transferred to much smaller schools, so not a huge loss there. And Ellington was incredibly talented but only played three games after deciding to pursue a pro career in football. And yes he was drafted by the San Francisco 49ers.

The Gamecocks do have a lot coming back. It’s interesting because this a fairly talented team, and with a few breaks the Gamecocks could make some noise. Frank Martins teams while at K-State always seemed to have good guard play and bruising no name forwards who did the necessary dirty work. Tyrone Johnson and Duane Notice are both very good and highly regarded players and could be the key to SC making a the first statement of the Martin tenure. Sindarius Thornwell has the potential to be an All-Conference player. A lot stems on whether he can shoulder the load. But they’ve all got to shoot a LOT better. Johnson somehow managed to shoot better from 3-point range than from 2. And 41% as a team just isn’t going to win you too many games in a Power Conference. The forwards coming back are mostly just guys. I know the SEC TV announcers seem to love Michael Carrera, but he’s just a solid player, and I think Demetrius Henry has a much higher upside. 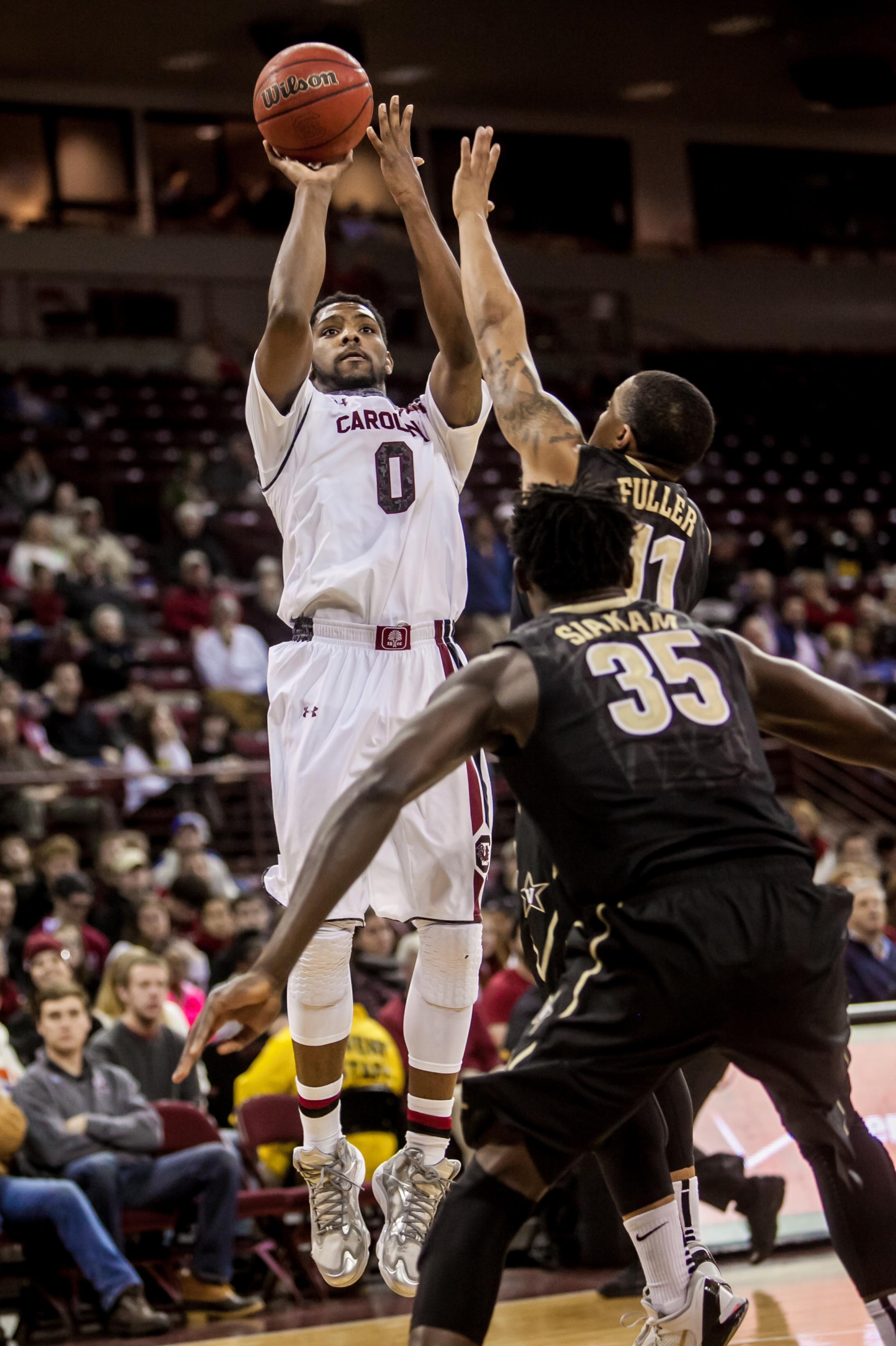 Thornwell is the most talented guy on the roster and f he shows up to play, South Carolina will be a tough out. The biggest issue for him will be his shot making ability. Thornwell needs to get into the mid 40’s for a FG%, I think SC has a good chance to be competitive. That likely means he is making more of an effort to get to the rim and get better shots rather than settling for contested jump shots. 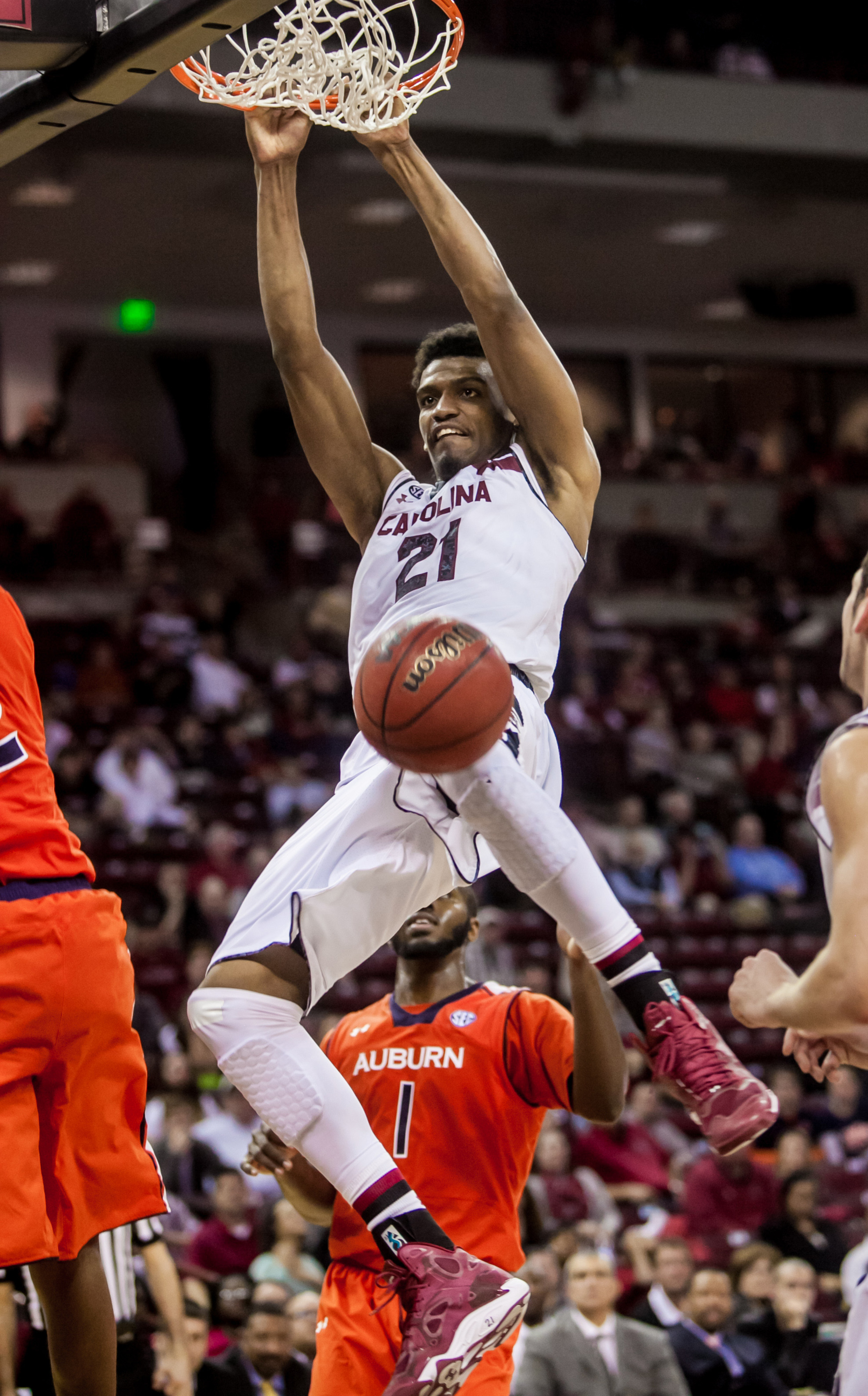 Henry could be the key to the season for the Gamecocks. He’s got the ability to step out and take bigger defenders off the dribble, he’s quick off the floor and aggressive attacking the rim. If he can go from 18 min/game to around 26, the upside for SC jumps significantly. Without a jump from Henry, it’s hard to imagine the Gamecocks making a dent in league play.

James Thompson, a 6’9" PF and another SC signee, ran into some legal trouble and has not enrolled in school at South Carolina. That’s really too bad because he would have rounded out the class quite well. Stroman is the highest regarded player in the class and a really nice point guard who should be able to contribute immediately if not challenge for starting minutes. Blanton is a well rounded player who should be able to provide very good minutes at the wing off the bench immediately, hurt. according to G&BA. Sheppard is intriguing because he’s a powerful body whose game is a little rough around the edges but grow into a very good player, in typical Frank Martin murder-ball style. You’ll have to wait on him though, as Shepperd tore his ACL and will about for the year.

The are real reasons for optimism in South Carolina. Frank Martin is finally starting to get his team where he wants it. And that’s a big deal. But is this the season that Martin starts to turn it around? I’m not ready to go that far yet. Having Sidarius Thornwell as a sophomore will help and he should be a much improved player. At this point it’s likely that Tyrone Johnson is about the player he is going to be, but you would expect that Duane Notice can make that second year leap. I like Stroman as a backup but where I start to get concerned is the performance of the bigs. I feel like SC is short one guy on the interior to be feared. Carrera is a hard worker but almost has the body of a Small Forward. Demetrius Henry has the highest upside of the bigs but can he stay on the floor? The more we see of Henry the better the team will be, and yet the lack of depth and reliability is the largest concern for the Gamecocks.

If Henry isn’t on the floor a lot that means he hasn’t improved enough from last season and the Gamecocks will have to rely on players like Kacinas and Chatkevicius and, while they’re serviceable, SC isn’t going to win a ton of games going up against the front lines in the SEC.

We lovingly called Martin’s version of basketball MURDERBALL, but he’s yet to really get there with South Carolina.

Where Martin needs to succeed is by infusing his own personality in this team. Martin is a bull of a coach on the court. He’s soft spoken, engaging and thoughtful off the court. We lovingly called Martin’s version of basketball MURDERBALL, but he’s yet to really get there with South Carolina. I think this team can be a step in the right direction, but I would put the cap on this season at about 7-8 wins. And while that would be progress it’s not the kind of progress I think the administration at South Carolina envisioned when they hired Martin a few years ago. I still think he’s at least two years away from being in trouble, and I like the direction the team is taking.

SC is probably a year away from making an real impact on the SEC in basketball. They’re still going to be relatively young where they have the most talent. Thornwell, Notice and Henry are a good trio to build off of as Sophomores. Stroman and Blanton should get ample opportunities to contribute and make impacts as freshmen. And if those 5 hold up and get better South Carolina will be poised to make a run in 2015-16. I just feel that they’re not quite there this year.

I think you're right that South Carolina's weakness is post depth, but that's a problem a lot of SEC teams will have. The big issue is that, given Martin's propensity to send his bigs out to foul, they'll struggle to stay in games, and at times we may end up moving Thornwell down to the 4 due to lack of options otherwise. So SEC teams with depth in the frontcourt will ruin the Gamecocks, but honestly, they'll ruin most SEC teams.

I think you undersell a bit the backcourt, which is going to be downright good this season. The Gamecocks spent a lot of last season without Ty Johnson, who went down to a season-ending knee injury early in SEC action. That gave Notice time to grow on the court last year, and the depth should show up with three proven options at the 1-3, along with two capable freshmen back-ups. This is the first time Carolina will play five SEC-caliber players at once in Martin's tenure, so a step up should be expected.

The things you note limit Carolina - their frontcourt isn't excellent and there's not enough depth and the talent's still a little young. But I disagree with your opinion on the expectations. Darrin Horn left a dumpster fire behind him, and with the transfers of our two best players (Damontre Harris and Anthony Gil) after his departure, Frank Martin's basically in Year 2, given that the 2012-13 season was Year 0. He should put a top 75 team on the floor this season, which would be the best team Carolina's put out since 2009. And there's no reason to think we won't be better in 2015-16. The future is bright in Carolina, even if it's still further away than Gamecock fans wish.

When I picture Frank Martin I have to imagine Edward Norton in The Incredible Hulk or a Trailer Park, just a big sign that says "Days without an Incident" except in his case it’s "Days without a Volcanic Eruption of Rage." Listen, let’s be real, Hurricane Frank is a still a year or so behind full murderball implementation, he’s getting there but it’s going to be at least another year of watching him try not to have the top of his head blow off like that garbage pail kid Adam Bomb. But hey, they still beat Kentucky last year, so that’s cool!

I'll keep the form open to be filled out until the season starts. If you would like a nifty rankings image like you see above from ChickenHoops picks, send me an email or tweet and I'll make it happen. You can also follow me on Twitter: