Bye weeks are better when they're totally quiet.

Alas, this one just got a little more interesting, and not in a particularly good way. It appears Aarion Penton was nailed Thursday night/Friday morning for suspicion of marijuana possession.

(2/2) MU team spokesman confirms suspension. Penton was also cited on suspicion of same crime, along with 3 other athletes, in March.

Penton's status for Texas A&M game is unclear. He's started all 9 games at CB this year. MU without S Braylon Webb for 1st half of A&M game.

Penton, 20, was cited for possession of 35 grams or less of marijuana, a Class A misdemeanor, at 1:40 a.m. on the MU campus in the area of Virginia Avenue and Rollins Street, according to the Columbia Police arrest log. [...]

Penton was also arrested for the same alleged offense on March 15 in Columbia along with a teammate and two Mizzou basketball players, but online court records indicate they were never convicted.

Since he was never convicted the first time around, I assume this isn't any sort of "he might be kicked off the team" situation. Regardless, one has to figure he won't play against A&M. That means that Mizzou will probably be without its best corner for the entire game and without its best safety for a half. Here's to hoping A&M receivers drop a lot of passes.

Sheesh, we escape the Internet for two hours, and a starting cornerback gets arrested...

Coach, you got anything to say on the matter? 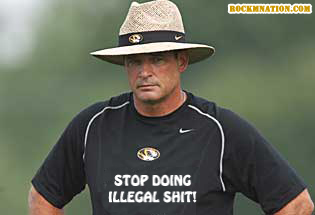