Gary Pinkel has pulled off his best ever in-season coaching job in Year 14 at Mizzou.

First things first: It felt strange and incredibly wrong to be leaving town the morning of this game. I guess that was a test of my grownupness; professionally, I really wanted to write about the Bayou Classic, and I left town to do it even though it was a severe letdown to the fan in me.

Regardless, I watched the game yesterday, and here are some thoughts:

1. This team is tough as hell

I mean, we've all figured that out at this point. Toughness and resilience have been this team's watchwords since the beginning of this strange year -- beating South Carolina after losing to Indiana, winning six straight after looking hopeless against Georgia, etc.

But Friday's win, more than any other one this season, exemplified all of the intangible words we so lazily use from time to time -- toughness, chemistry, leadership, et cetera. Mizzou's defense got excited when Arkansas lined up in some crazy, 18-lineman power formation. Guys like Shane Ray and Markus Golden and Lucas Vincent and Mike Scherer seem to excel when a wave of bodies is trying to push them over. The Tigers wanted to run the ball down the tired Hogs' throat in the fourth quarter. When this team gets a little bit of blood in its mouth, it collectively relaxes. And that is one of the most purely likable, redeeming qualities a team can have, isn't it?

Mitch Morse says team camaraderie is best ever. "There's really no bad apples on the team."

Morse: "Coach Pinkel recruits the kind of guy who's going to be dedicated to the team."

Morse says Georgia loss was "blessing in disguise." Team rededicated itself to practice

Markus Golden said, after the Georgia loss, the leaders on the team said they couldn't let one game define their season.

In his post-game CBS interview, as fans were rushing the field around him, Gary Pinkel simply shook his head and said "I love this team, man. They battle." 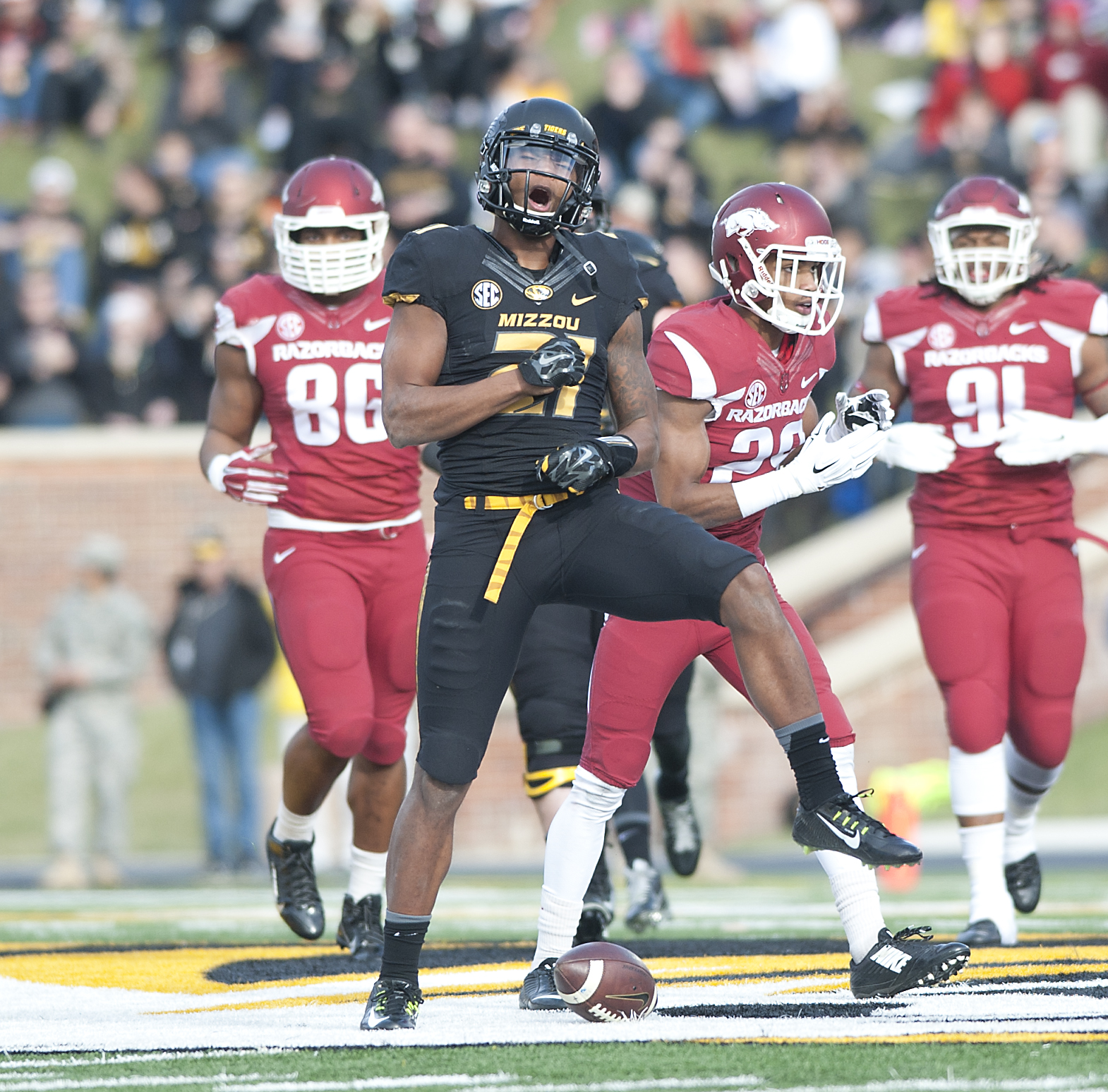 The Mizzou defense has been lights-out for a good portion of the season. The Tigers are one of just eight teams allowing 4.6 or fewer yards per play this season, and they are one of just five to allow under 4.3 in conference play. So when we talk about defensive toughness and whatnot, we're really just talking a really good defense.

But I would wager that while the offense isn't nearly as good as the defense, it's every bit as tough. You had the offensive line rallying after an awful first half to carve out large chunks of running room and give Maty Mauk plenty of time to throw in the second half. And you had a receiving corps coming back from one of its worst halves of football (which is saying something) to once again make all the plays down the stretch. Jimmie Hunt had three first-half drops (two were pretty bad and one was somewhat forgivable) but caught a 44-yard heave on the first play of the fourth quarter (and yes, he bobbled it for every millisecond that he was allowed to before securing it), then caught a tough touchdown pass five snaps later.

In between those catches, Bud Sasser, who committed two silly first-half penalties and lost a fumble in the third quarter, made a gorgeous, 28-yard over-the-shoulder grab, his ninth catch of the game.

The receiving corps has been both immensely important and inconsistent this year. But be it Darius White's one-handed snare of a Mauk pass against Texas A&M, Hunt's two bombs against Tennessee and Arkansas, or Sasser's leaping one-on-one grab against South Carolina, Missouri's season has been defined by plays these guys make. Mizzou survived (mostly) with one to two of them battling injuries in the middle of the year; the Tigers have thrived with all three battling late. They don't always bring it, but they've brought it when it mattered the most. That's how you get remembered.

Joe Walljasper had a great line in his Sunday column this week:

Pinkel, credited for his great loyalty when he isn’t being criticized for his stubbornness, stuck with quarterback Maty Mauk when nobody would have faulted him for making a change. Mauk paid him back richly at the end of the season — never more so than the fourth quarter against Arkansas.

We know quite well that internet memes never actually die, but if they did, I would like to think that this season has been the one to kill the "Pinkel is too stubborn!!" zombie once and for all. Missouri started off the season winging the ball around as much as almost anybody in the country, particularly on passing downs. I joked in September that every passing downs play-call was basically "Hey Maty, go make a play." But when defenses figure Mauk out a bit, and when both White and Hunt began to battle injuries for varying amounts of time, Mizzou adjusted. Following the Georgia game, Missouri became a much slower, more run-heavy team, one that focused on ball control and setting its defense up to succeed.

The staff stuck with Mauk, obviously, but both the coaches and the team figured out, "Here's what we're good at, here's what we're not good at, and here's how we're going to try to win games." And in the end, this has probably been Pinkel's best in-season coaching job. Honestly, I can't think of what other season would even come close in that regard.

Beyond big in-season shifts, however, we've seen some beautiful adaptation from opponent to opponent.

Morse says OC Josh Henson is "great at feeling out how the game progresses."

On Friday, Mizzou shifted to quite a bit more 4-3 alignment on defense and four- and five-receiver sets on offense. And after stretching Arkansas from side to side with short passing in the first half, Mizzou vertical in the second. When you can't out-talent the other team, you have to out-maneuver them. Mizzou has done a pretty incredible job of that of late.

4. Five days to get the Little Things™ back

I wrote last week how Mizzou had switched from being a Little Things™ team to a Big Things™ team, beginning to win yardage battles by good amounts but giving up all sorts of gains with awful field position and, to a lesser degree, drive finishing.

Two weeks ago, Texas A&M's average starting field position was 12 yards better than Missouri's, which resulted in Mizzou losing about 150 hidden yards over the course of the game. It was worse than that in the first half of the Tennessee game before Mizzou stabilized in the second.

On Friday, it was even worse. Average starting field position: Arkansas 36, Missouri 21. Over the course of 21 possessions (10 for Arkansas, 11 for Mizzou), that's basically another 150-160 yards in the Hogs' favor. Three Christian Brinser punts had a net of just 24.7 yards; it was pretty easily his worst game of the year in that regard. Meanwhile, to top it off, Mizzou fell victim to another fake, this time on a punt.

Throw in some drive-finishing problems against Texas A&M, and you basically have a lot of things Missouri simply cannot do this coming Saturday. In terms of yardage, Missouri was +246 against A&M, +131 against Tennessee, and +135 against Arkansas and needed dramatic late stops/onside kick "recoveries" to win all three games. Unless you think Mizzou can outgain Alabama by similar margins, this will be a game in which Missouri must absolutely, positively bring its best in terms of special teams, field position, finishing drives ... Little Things™. 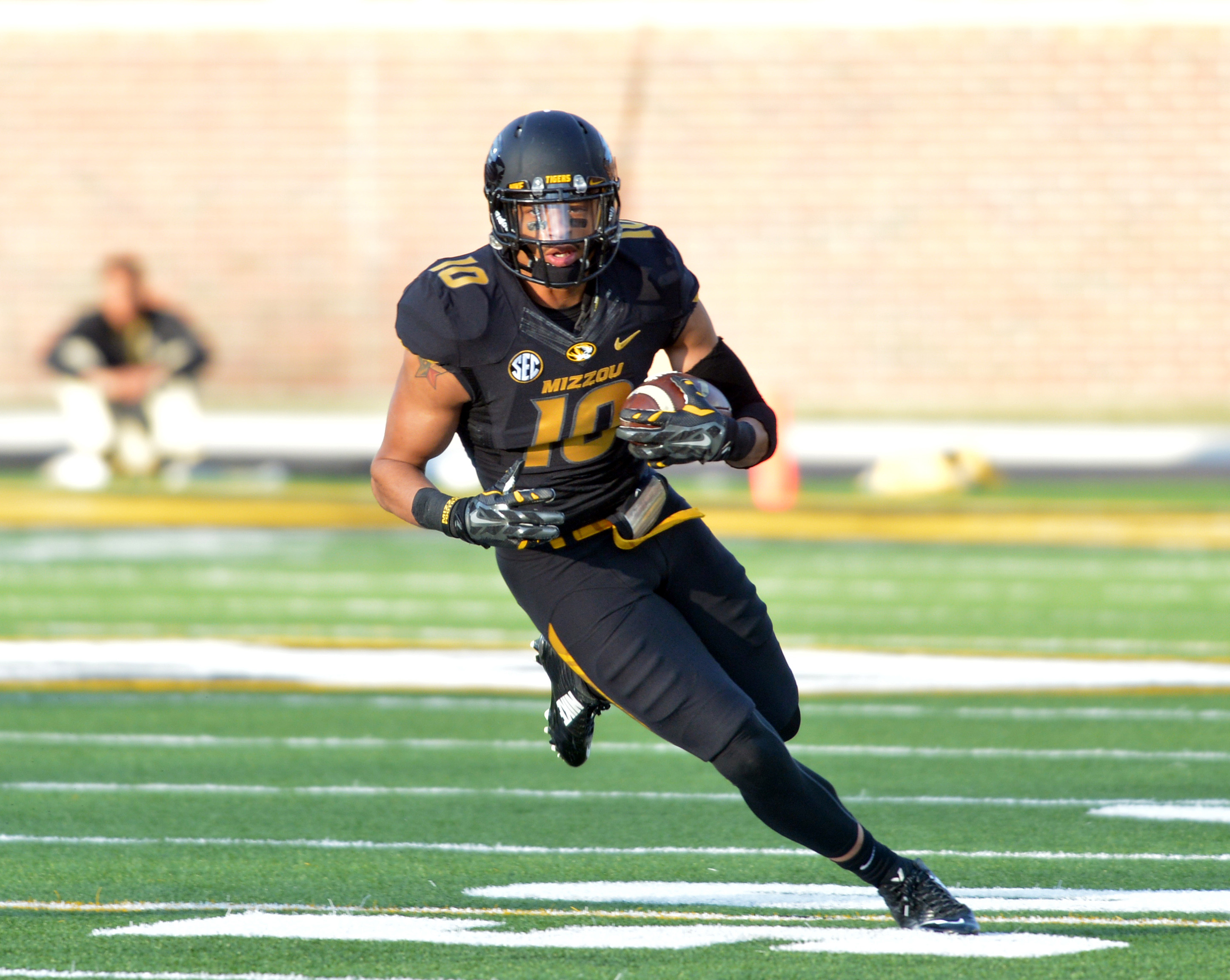 A lot of young guys made heady, athletic plays, and that's exciting for both the present and future tenses. Missouri is going to be asking a new batch of young players to step into larger roles next year. Guys like Newsom, Gibson, Mike Scherer, Aarion Penton, Sean Culkin, et cetera, have already played marquee minutes, but others like Reese, Witter, and Sherrils will be fighting for lots more playing time in the spring, and they've begun to look the part.