Mizzou Hoops plays Elon tonight at Mizzou Arena, Missouri's assistant football coaches are both well-paid and probably due for more money, and both Mizzou Volleyball and Mizzou Gymnastics lose key players to transfer.

Share All sharing options for: Mizzou Links: Elon comes to Columbia, and football coaches get paid

I appreciate the rest of college basketball trying to make Mizzou feel better about losing to UMKC -- SEOSU beating Tulsa, Incarnate Word beating Nebraska, NJIT and EMU beating Michigan -- but I'd appreciate it if Mizzou just went ahead and took down Frank Haith's alma mater tonight. (For what it's worth, Ken Pomeroy's projections say Mizzou has an 82% chance of doing just that.)

Hiring Frank Haith. It’s how you get ants. pic.twitter.com/UhPZraQrUf

The recruiting links are flowing

And if you're more into basketball recruiting...

ESPN100 forward Ted Kapita will take an official visit to Missouri on Sunday, per a source. He's ranked No. 37 in the 2015 class.

It requires 20-hour days and ridiculous scrutiny, but ... damn, high-level college football coaches get paid. These salaries are actually a bit of a bargain... 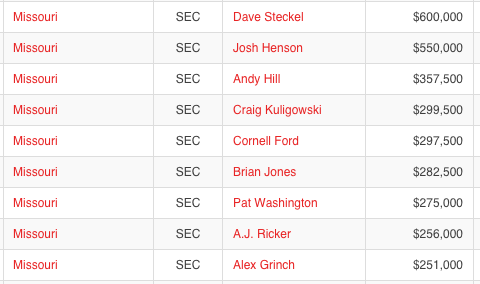 An odd day for the Mizzou women

Hopefully there aren't many days like this: Mizzou Volleyball announced that setter Loxley Keala is transferring, and Mizzou Gymnastics confirmed that its best overall performer, Rachel Updike, left the team a while back.

But on the bright side...