A day after his third season with Memphis ended, Barry Odom has been named Missouri's new defensive coordinator. Odom will replace Dave Steckel, who was recently named Missouri State's head coach and will depart for Springfield after the Citrus Bowl on January 1. He will also replace Steckel as Mizzou's linebackers coach.

When Steckel's departure was announced, we all assumed that the D.C. job would likely come down to either Odom or renowned Mizzou defensive line coach Craig Kuligowski. In the end, perhaps Odom's own coordinator experience tipped the scales in his favor. 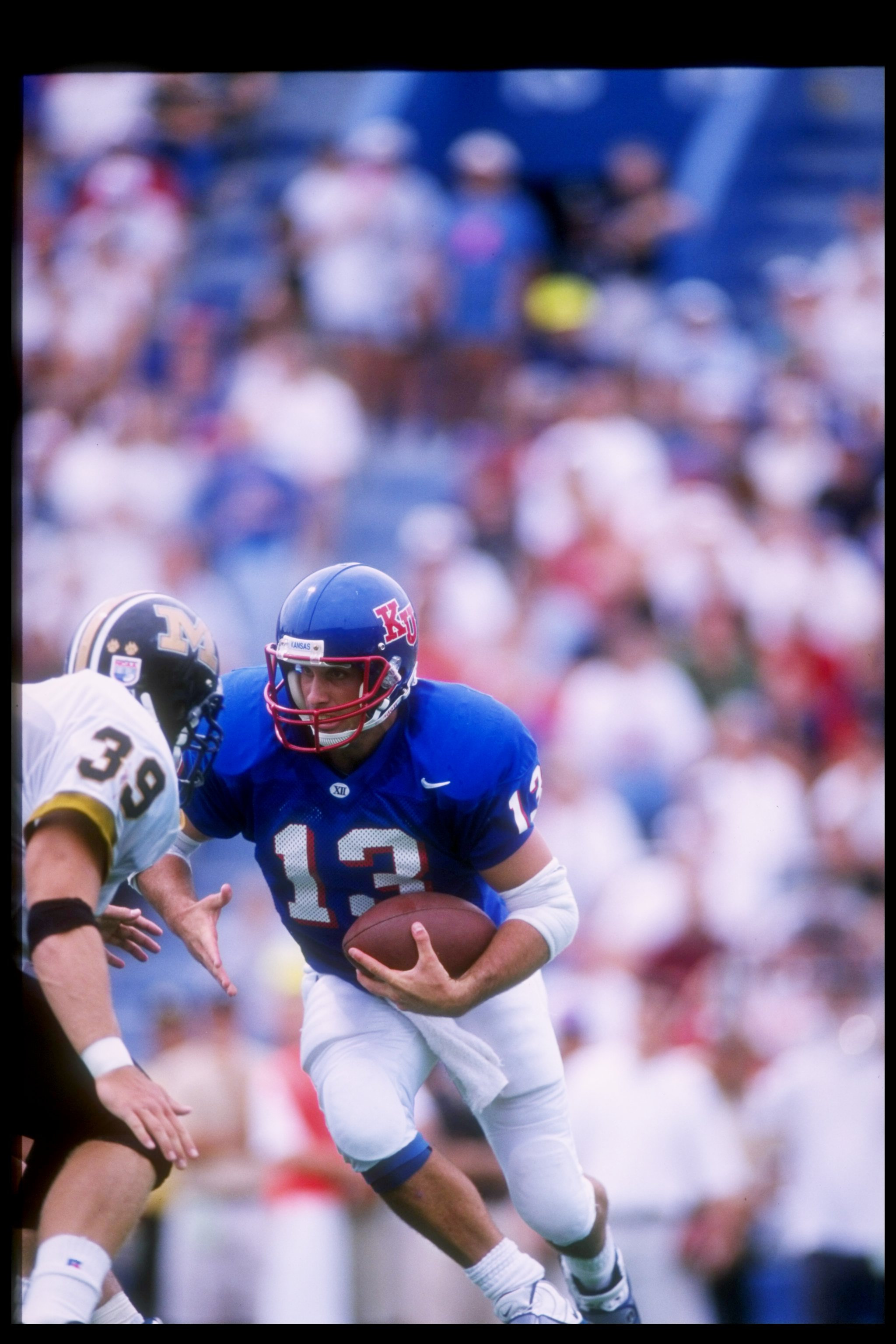 It's a homecoming for Odom as he returns to his alma mater, where he starred as a linebacker for Mizzou from 1996-99 and later returned for a nine-year stint (2003-11) in a variety of roles for Pinkel's staff. He first came back in 2003 as an administrative graduate assistant, and after one year in that role, Odom moved to director of recruiting for the 2004 and 2005 seasons and then served three years (2006-08) as director of football operations. [...]

"We're really excited to have Barry and his family back at Mizzou," said Head Coach Gary Pinkel. "He's done an outstanding job at Memphis these past three years. He's coached with us before, and it's great to see someone professionally advance himself and go do such a great job elsewhere. I know he was sought after by several other power five schools recently, so we feel very fortunate to have him with us," Pinkel said.

"It goes without saying how excited I am to have this opportunity," said Odom. "I have such a deep respect for the success that Coach Pinkel and his staff have had since I've been away. Transitioning to a new conference is very challenging, and all they've done is get better at everything. When you look nationally at winning percentage, APR, graduation rates, Mizzou is the total package and it's absolutely one of the top football programs and athletic departments in the country. I'm excited to do my part to continue to add to that, and our family is excited to be part of it again," he said.

Odom has deep ties to the Missouri program. He was a stalwart linebacker for the Tigers from 1996-99, playing through injuries and placing fifth on Missouri's all-time tackles list. His coaching prowess was obvious early -- he was named head coach of Columbia's Rock Bridge high school in 2001 at the age of 24 and immediately guided the Bruins to their first winning season in four years. In 2003, he moved to a graduate assistant role on Gary Pinkel's Mizzou staff, then jumped to Director of Football Recruiting in 2004 and Director of Football Operations in 2006. In 2009, when defensive coordinator Matt Eberflus left for the NFL, Steckel was promoted to coordinator, and Odom was promoted to safeties coach at age 33.

In December 2011, when Justin Fuente was hired as Memphis' head coach, he gave Odom the role of defensive coordinator. From my Blueprint for a Rebuild piece in August:

Fuente's biggest coup may have been nabbing and keeping Barry Odom as his defensive coordinator. A longtime assistant under Gary Pinkel at his alma mater, Missouri, Odom needed only one season to begin crafting something useful of the Memphis defense. He was a rumored candidate for Arkansas' defensive coordinator position in the weeks after the 2013 season ended.

"To be honest with you, I never thought he'd leave Missouri. He played there, and he'd been coaching there for a long time. I couldn't believe he would leave, but when I got the job, we kept talking. I felt pretty good about that hire. ... Things kind of fell right for us in a few aspects, but I had a pretty decent idea of which direction I wanted to go."

From a December 2011 Columbia Tribune piece:

"For whatever reason we hit it off and always kept in contact," Odom said. "Our paths have crossed for a number of years. It was never the fact that, 'Hey, when I get a job, I'll hire you or want to hire you.' We just have a lot of common beliefs and philosophies and if it ever arose, we'd definitely both look into it."

Odom said he interviewed last Monday in Memphis and talked to Pinkel about the offer the next morning. It wasn't necessarily an easy decision to leave his alma mater.

"This place, Mizzou, what an unbelievable special place it is," he said. "I'll be indebted to Coach Pinkel and Mike Alden forever, for my life, because they gave me an opportunity. I've lived here since '96. That's a pretty long stretch now. … It was very, very difficult to leave Coach Pinkel and his staff, No. 1, because of all the great things this program has done and will continue to do. But the opportunity to be a coordinator and to work for someone I know and to see what's going to take place at Memphis, it's something I want to be a part of."

Improvement was steady and mostly linear for Odom's Memphis defenses. As the Tigers grew from a depth-and-athleticism perspective, Odom figured out more and more of the right buttons to push. To get more of his athletes on the field, he switched to a flexible 3-4 style of defense, and his front seven ranked 12th in Havoc Rate heading into the bowl game. (For perspective, Missouri currently ranks 19th, albeit with a tougher schedule.)

Full disclosure: I'm a Barry Odom homer. The Memphis defensive coordinator went to Ada High School in Oklahoma in the mid-1990s, and his team beat mine a couple of times in the state playoffs. He ended up attending my alma mater (Missouri) and serving as a stalwart linebacker, fighting through injuries and maintaining a steady presence, especially on the 1997-98 Tiger teams that attended the postseason after a long bowl drought. He spent nearly a decade on Gary Pinkel's Mizzou staff, as well. He's down-to-earth, likable, and full of promise as a defensive coach.

And if you don't trust me to give you an unbiased opinion on that last point, just look at the numbers instead. Under Larry Porter, Memphis' defense was nearly as bad as its offense. In both 2010 and 2011, the Tigers ranked 114th in Def. F/+; but in 2012, despite quite a bit of turnover up front, Memphis improved 34 spots, to 80th. The defense was below average in September, average in October, and downright good in November.

Odom was a no-brainer selection as Steckel's replacement. He was young and in demand, and his Mizzou ties are bringing him back to Columbia. He will team with Josh Henson to form one of the younger, more exciting coordinator duos in the Southeastern Conference.

There are still a couple of questions to answer in the coming hours, days, and weeks:

Labels are only so helpful; Mizzou was officially a 4-3 defense under Dave Steckel but spent plenty of time in a 4-2-5 nickel formation and sets with three down linemen. No matter what Odom calls his defense, we'll probably see similar diversity.

Still, it will be interesting to see what changes Odom makes this coming spring. Mizzou's current personnel would fit well with a 3-4 structure -- Harold Brantley and Rickey Hatley are already shaped like 3-4 ends, among other things -- and if nothing else, Odom's switch to the 3-4 at Memphis showed that he is adaptable and willing to adjust his scheme to fit the talent at hand.

We technically don't even know if Craig Kuligowski wanted the coordinator position, but Coach Kul may have been in line for a raise and/or upgraded position title (some sort of "co-coordinator" or "assistant associate defensive head coach" or whatnot) even before getting passed over for the coordinator role. We should learn pretty quickly if his or any of the other defensive assistants (Cornell Ford, Alex Grinch) will see changes in titles/pay in light of this shuffle.

As he was an Oklahoman whose high school ripped up my high school when I was there, I really liked Barry Odom even before I found out if he was a good linebacker. When it turned out he was a very good linebacker, I bought his jersey. I have an old, drastically oversized #39 jersey somewhere in my basement right now. My personal appreciation of Odom made me really hope he would turn out to be a good coach.

He's indeed a good coach. And he's Mizzou's again. This is a pretty good day.