On offense, Bud Sasser and Jimmie Hunt are Mizzou players most likely to be drafted into NFL

Note: I'm not a professional talent evaluator, but much like every one else on the internet, I can pretend with the best of them

Share All sharing options for: On offense, Bud Sasser and Jimmie Hunt are Mizzou players most likely to be drafted into NFL

Le'ts take a look at the NFL Draft eligible players on Mizzou's offensive side of the ball at the end of the 2014 regular season. Even including a spectacular or disastrous performance in the Citrus Bowl vs Minnesota, several of these players are going to get drafted next April or as UDFA's later in May. I should make it clear that any predictions below are which round a player would go if they were drafted, not necessarily a prediction that they will go in that round.

Any discussion about a player's draft potential, for better or worse, typically begins with the player's measurables. Above graphic via reddit user Zeiros, originally posted on r/dataisbeautiful Another, more recent chart (seen above) was created by Tomer Cohen on his blog here

As you can see, both Marcus Murphy and Russell Hansbrough fall at the very bottom limit of size distribution for NFL caliber running backs. The market for running backs in the NFL has been majorly depressed by a combination of a shift in philosophy to committee backfields as well as the sheer volume of replacement level players available each year.

No Marcus Murphy - Thank. You.

The Marcus Murphy as a slot back/receiver, aka "The Marcus Murphy Experiment," was likely an effort by the coaching staff to give Mizzou's passing game more diversity considering the lack of receiver depth as well as appease Murphy and give him more touches in open space, where he can be particularly effective. Marcus Murphy makes up for his smaller stature for his sheer breakaway speed and utility as both a running back and in returning kicks and punts, which adds value to his chances to make an NFL roster.

Murphy's effectiveness in space was never more evident than when he was returning kicks and if he is drafted in a later round, it'll be primarily in that capacity. As far as Murphy's chances to be drafted as a pure running back, he didn't demonstrate the strength to run through many arm tackles, frequently being tripped up just before reaching daylight, or a particular talent for pass blocking that is so crucial at the next level. However, he did flash the speed to the edge on sweep plays and I can't recall many instances where he tried to string a play out and ended up losing yards. We've seen many smaller players such as Dexter McCluster, Trindon Holliday, or Darren Sproles range from special teams ace to third down specialist while making a pro career and it is possible this is Murphy's destiny as well.

My Pick: 6th-7th round to UDFA
Bill C's Pick: ditto

Russell Hansbrough is unlikely to turn pro after this year although when healthy and running behind a solid offensive line he has demonstrated to me he's capable of being at least a rotational back if he makes an NFL team. Hansbrough, or "Mansbrough" as we are fond of calling him, has demonstrated a toughness that can be a double edged sword for a smaller back, at one point this season he had zero rushes for a loss despite frequently being stacked up at the line and he routinely made a point to initiate contact on tacklers, but this wore on his body causing him to be nicked up several times throughout the season and coaches even mentioned having to caution Hansbrough away from those bigger hits due to his smaller size.

Hansbrough doesn't appear to have the burst or top end speed to be a starter in the NFL, and as we saw in the SECCG he can occasionally try to string plays out to find extra yards that aren't there. But he has a solid lower body strength, explosive lateral quickness and great field vision that reminds me of a young Maurice Jones-Drew. If he can add 10-15 lbs and maintain his current speed and agility while staying healthy for the 2015 season, I think he'll be a mid-tier draft selection.

My Pick: Not likely to turn pro, undrafted if he declared at this time
Bill C's Pick: agreed

All three of Mizzou's senior wide receiving corps fall well within the ideal height/weight distribution for their positions in the NFL which, combined with some flashes of unique potential from all three, could bode well for them when the apply for the NFL draft. Unfortunately, perhaps the next most saturated market behind running backs is wide receivers, last year 31 wide receivers were drafted and such an abundance of talent declaring each year again factors in to the ability for pro teams to easily find replacements.

Of these three I would rank them in order: Sasser, Hunt, then White in terms of potential for being drafted/making an NFL roster.

Bud Sasser provides the most reliable target of the group, something Mizzou fans can attest to due to his numerous remarkable and frequently game-saving catches, perhaps most notably this season's win over South Carolina. Sasser doesn't flash the speed to burn defenders deep or get separation on routes, but he his hands and body control were perhaps his greatest attributes, aside from his periodic 'debates' with 'injured' players or gamesmanship with opposing cornerbacks.

As 2014 progressed, I became increasingly appreciative of the way Sasser could set up certain catches with smart route running, knowing full well that Mauk had him as his first read. An excellent example of this was Sasser's corner route touchdown vs Tennessee, which mirrored his fantastic catch vs Arkansas a week later. He nearly eclipsed a thousand yards receiving despite being the only consistently healthy receiver on a team who's quarterback narrowly topped 50% passing and who opposing defenses would often put their #1 corner against.

Sasser doesn't quite fit into the typical roles when you talk about NFL wide receivers, he's not big enough or strong enough to be a true #1, he's not fast enough to be a deep threat and not quick enough to be a slot receiver. Despite all this I've seen plenty of less reliable players find their way on to NFL rosters, I'm sure someone like the Kansas City Chiefs would love a guy who can catch passes for touchdowns.

And who knows, maybe he could be their quarterback too?

Jimmie Hunt has become something of a legend among Mizzou fans with his knack for making huge gains with timely catches. Of most recent note, he had a 73 yard touchdown grab vs Tennessee and a bobbling 44 yard catch on 3rd down against Arkansas that reminded everyone of his ability to be a team's deep threat out of the slot. Hunt battled injuries for portions of his junior and senior seasons, and combined with a propensity for dropping passes he will be graded down for lack of focus and consistency, but he's an explosive receiver who can eat up or beat coverages.

Depending on how he allays concerns about his catching and route-running during his Pro Day and during the NFL Draft workouts, he could turn into a Sunday starter in the same fashion as Eddie Royal, who struggled early in his career with drops.

Darius White's "Money Season" was hurt drastically by back to back groin injuries that severely impeded his greatest asset: his deep speed. Of this group, White came in as the most heralded, he had size, speed and the hands to secure himself a high 4* ranking and ideally a potential early NFL draft pick. White came to Mizzou with some questions about his character and it flared up again during the loss to Indiana where he was seen arguing with Maty Mauk, but nothing came of it and he battled back to return to the starting line up and was able to reel in perhaps the biggest catch of his Mizzou career with this fade route touchdown vs Texas A&M. His hands were most notable on the one-handed crossing route catch he made to extend a key drive and prevent a likely turnover vs Texas A&M.

White has all the traits that one thinks of when you think of a #1 wide receiver in the NFL: tall, fast, good hands and a boisterous personality. But he's been unable to demonstrate his talents on the field and thus remains my biggest enigma for draft day. A healthy, motivated Darius White who dominates his Pro Day and Combine could vault him into a 2nd or 3rd day pick for a team with an observant scouting department looking for a steal, but his lack of polished route-running, poor body control and strength and disappointing stats should cause him to drop until the later rounds or go undrafted.

Looking purely at Mitch Morse's measurables, he's dead on for an offensive tackle, and his versatility having played both RT as a junior and switch to LT as a senior in relief of departed 2nd round pick Justin Britt would seem to indicate he has a future in the NFL. He's avoided significant knee injuries and has demonstrated the capacity to hold up against some of the toughest defensive ends in the country by playing in the SEC. He's a vocal and humble leader in the locker room who I've personally witnessed take the brunt of poor play and vow to motivate a team. I'm a fan of his ability to go one on one with strong defensive ends but I've seen him struggle against faster ends who can use their hands for leverage or to shed blocks.

Grading offensive lineman's potential into the NFL is as much about fit and scheme as talent and measurables, which is I maintain Justin Britt ended up on the Seahawks. I could see Mitch Morse being drafted in a later round and competing at the right tackle position in the same manner as his predecessor.

My Pick: 5th round
BIll C's Pick: 6th round to UDFA 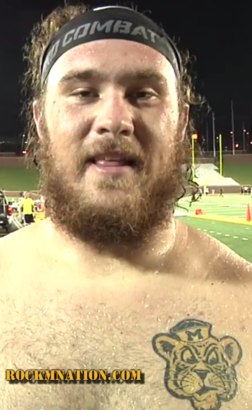 Evan Boehm is a junior center and therefore eligible to declare for the NFL, but like most interior lineman and the majority of Mizzou lineman, he will likely play his senior season before going pro.

If Evan Boehm stays healthy for his senior season I think he's a solid 2nd round pick at either the center or guard position - probably guard. Boehm's natural size and ability to carry 300 plus pounds on that frame combined with his lateral movement and pulling ability suggest to me he'd fit great in a counter-block heavy line system but he could work well in any scheme. Evan Boehm is a vocal and charismatic leader who can make line calls and be the quarterback's best friend while also possessing a mean streak to finish blocks and protect his teammates.

I wish Evan Boehm could stay at Mizzou forever.

Those are my thoughts on Mizzou's NFL caliber players on the offensive side of the ball. As the NFL draft draws closer, I'll revisit these thoughts and musings, but until then, let me know why you think I'm wrong.