Taking a look at the favorites in the SEC Tournament and the SEC's basketball trends as a whole.

The five-day SEC Tournament tips off tonight in Atlanta, with two first-round matchups: 12-seed Auburn vs. 13-seed South Carolina and 11-seed Vanderbilt vs. 14-seed Mississippi State. Others have written pretty good tournament previews already, from Team Speed Kills to Ken Pomeroy, so I wanted to discuss a few things about both the tournament and the SEC as a whole.

The odds are what you think they are

Here are Pomeroy's Tournament odds. As one would expect, it's Florida vs. the field, though the Gators will likely have to get past a smoking hot Tennessee team in the semifinals. 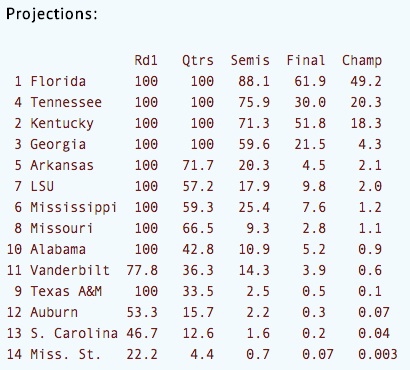 Missouri has the sixth-best odds of making the quarterfinals, the 10th-best odds of reaching the semis and finals, and the eighth-best odds of winning the whole thing. As Missouri is the tournament's 8-seed, this certainly makes sense.

The big hurdle obviously comes in the quarterfinals, where Florida awaits. Granted, Missouri has to beat an A&M team that almost won in Columbia last week just to get there, and granted, nobody would be surprised if the Tigers lost that game. But drawing Florida instead of, say, finishing sixth (or 11th) and drawing Georgia, is an obvious disadvantage even considering how Georgia played against Missouri.

If Mizzou does get past Florida, there's about a 76-percent chance the Tigers would play Tennessee. Other odds: Arkansas 20 percent, Auburn and South Carolina two percent each.

So yeah, Mizzou's odds aren't great here. But we knew that.

One thing I adore about Pomeroy's site is the conference profile pages. Here's the SEC's (http://kenpom.com/conf.php?c=SEC). It features not only overall and conference-only ratings (in the upset of the year, Mizzou DIDN'T end up with the 14th-ranked defense in conference play; thanks, MSU!), all-conference selections, and overall conference ratings. It also features what I enjoy calling personality stats. Without giving away too much info (since this is, after all, a subscriber site), I'll share only a bit from that last part. 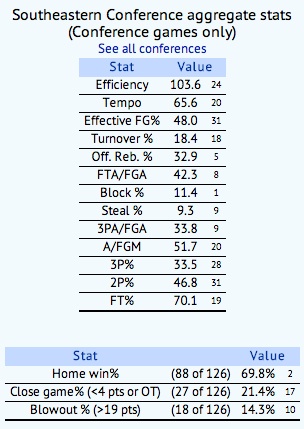 This shows you the SEC's personality, so to speak -- how fast its games are and what its teams are particularly good and bad at doing.

What you quickly get a picture of here is a conference that is all sorts of athletic and in no way offensively skilled. Nobody blocks more shots than SEC teams, and few grab more offensive rebounds, get to the line, or steal the ball. This is an aggressive, athletic conference, seemingly meant for football players who got too tall for football.

Meanwhile, of 32 conferences, only one shoots the ball worse than the SEC: the MEAC. SEC teams shoot worse than the Colonial, Conference USA, the SWAC, America East, etc. Everybody but the MEAC. Even taking blocks into account, that's amazing. It also perhaps describes why SEC teams have the second-largest home-court advantage of any conference and why there isn't an abundance of close games in conference play. There are rarely going to be two teams with hot hands in the same game. In all, 14 conferences had an eFG% better than 49.5% as a whole; in the SEC, only one team shoots better than that: Florida. Whereas so many SEC games come down to misses and rebounds, Florida simply takes and makes shots on one end, forces misses on the other, and cruises.

There is an ongoing debate about how to improve SEC basketball as a whole. Part of the problem is certainly cyclical; in the last decade, Florida, Kentucky, Tennessee, and Missouri have all put elite products on the court, and programs like Texas A&M, Vanderbilt, and (almost a decade ago) LSU, Mississippi State, and Alabama have all received top-5 seeds in the NCAA Tournament at least once. A lot of the SEC's problems simply come down to making the wrong hire, something that can get rectified after a couple of particularly bad seasons.

But there is something to be said here about basketball talent in the South and the fact that there's more athleticism and less pure offensive ability involved. The South is seen as a football-first region, and with good reason; these basketball stats kind of back that up

South Carolina's biggest advantages: This is Frank Martin's team; the 'Cocks crush you on the offensive glass (Auburn's not that great at stopping you) and draw a ton of fouls (Auburn fouls a lot).

Vanderbilt's biggest advantages: The Commodores have a decent defense, and MSU has the worst offense in the conference. Meanwhile, Vandy's offense isn't great, but the 'Dores get decent looks inside the 3-point line, and MSU gives you all the easy looks you want.

MSU's biggest advantages: Vandy takes more 3s than anybody in the conference and makes only 31 percent of them. The Bulldogs are also decent on the defensive glass, and Vandy isn't much of a threat to grab second-chances opportunities. If VU is cold from the floor, this game will stay close.