Missouri Basketball 2013-14: 10 moments that have defined the season

Missouri's 2013-14 season is not over yet -- the Tigers will play in the second round of the NIT on Sunday -- but only the final chapter remains. Here's a look at nine moments that have defined the season, with one still to come.

Share All sharing options for: Missouri Basketball 2013-14: 10 moments that have defined the season

Mizzou trailed a strong UCLA team by double digits for much of the teams' contest on December 7, but a trio of Earnest Ross 3-pointers finished off a startling Mizzou comeback, and another one with six minutes left capped a 31-13 run and gave Mizzou an eight-point lead that it would not relinquish.

We knew the NIT was a possibility for this team when the season started, but the Tigers' win, hours before the football team's loss in the SEC title game, made this possibility seem pretty unlikely.

Missouri was still undefeated and ranked 23rd in the country, and while the advanced stats still weren't very high on this team, the Tigers came within four seconds of going undefeated in non-conference play. At the Scottrade Center on December 21, Mizzou led Illinois by seven points with nine minutes remaining, but a quick 9-0 run gave †he Illini the lead and set up a tense, back-and-forth finish.

Jabari Brown made a 3-pointer on a perfectly designed play with 15 seconds left, and Mizzou took a 64-63 lead. But Tracy Abrams was fouled by Johnathan Williams III with four seconds left and made both free throws, and Mizzou fell to 10-1. 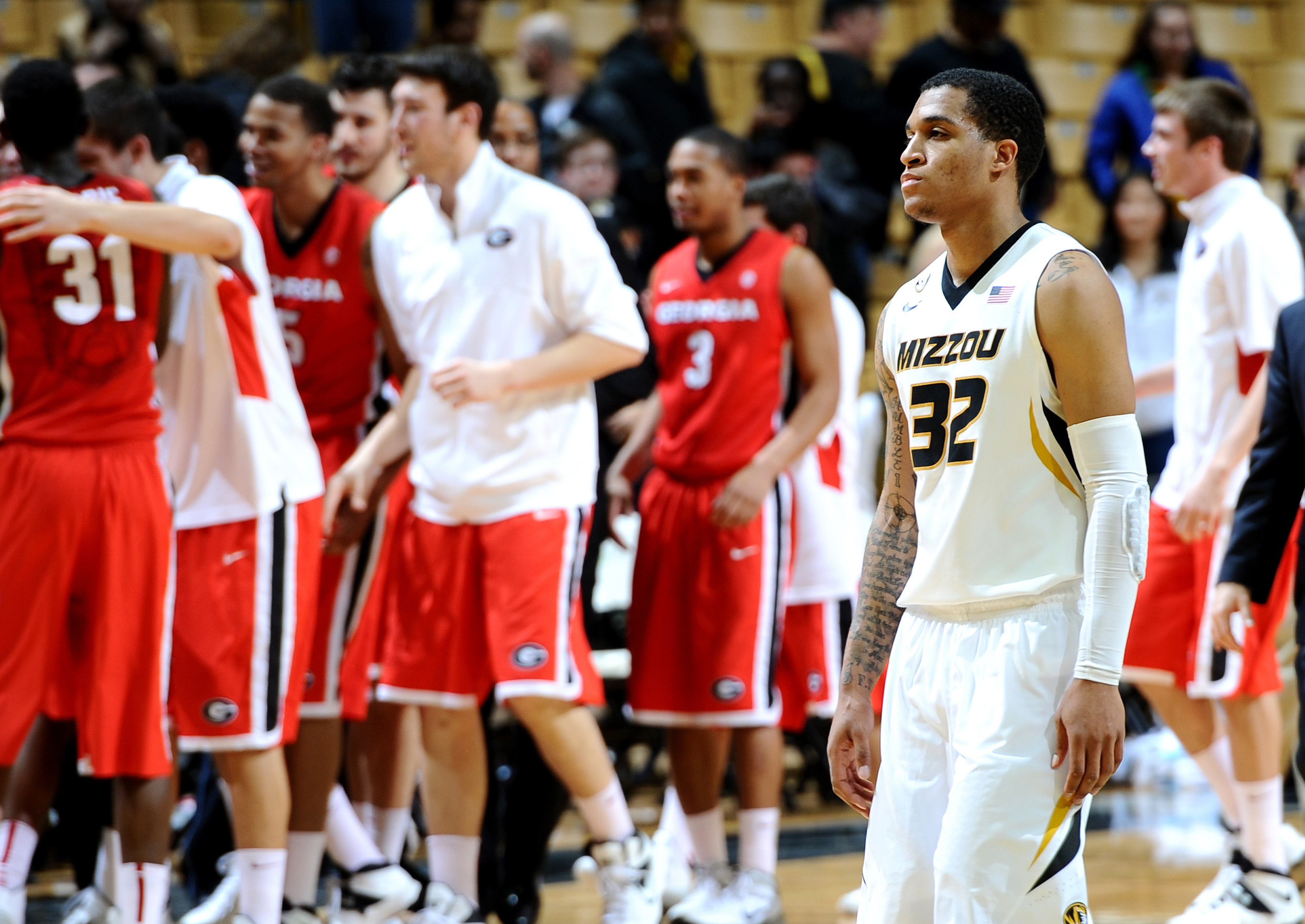 Missouri has lost six games by six or fewer points this season (so far), but none was more stunning or damaging than the Tigers' 70-64 loss to Georgia at home to start conference play. Stirred by the death of head coach Mark Fox's father, the Bulldogs jumped to an 8-0 lead, then went on an 11-0 run late in the first half. Mizzou stormed back and took the lead early in the second half, but every time it looked like the Tigers were almost ready to put the Dawgs away, Georgia responded. Jordan Clarkson made a 3-pointer with 52 seconds left, and the game went to overtime.

Mizzou quickly jumped out to a five-point lead in overtime, and HERE was where the Tigers were absolutely going to deal the knockout blow, right? Unfortunately, the knockout blow really didn't exist for this team. Nemanja Djurisic hit a 3-pointer on a broken play with 1:40 left, tying the game. Jabari Brown missed a pair of 3-pointers, Georgia made five of six free throws in the final 30 seconds, and Georgia dealt the Tigers a stunning loss.

4. Winning at the Bud

Mizzou lost at Vanderbilt and LSU to start SEC play 2-3, but the Tigers had a chance to get one back in their January 28 trip to Arkansas. Jabari Brown, in the midst of a torrid hot streak, made four of five 3-pointers, and Missouri pulled off something it didn't manage nearly enough in 2013-14: a hot start. Mizzou jumped out to a 10-3 lead and withstood some foul trouble to take a lead into halftime.

It was nip-and-tuck through most of the first 10 minutes of the second half, but back-to-back-to-back 3-pointers by Earnest Ross (one) and Brown (two) gave the Tigers a startling 56-46 lead. Arkansas responded with an 11-2 run, however, then took the lead with under four minutes remaining. But Mizzou responded right back, putting the game away with a 9-0 spurt in the game's final two minutes and winning, 75-71.

Ole Miss' Marshall Henderson took "no-conscience shooter" to a new level in two years in Oxford, but while he shot his team out of plenty of games in his career, he tended to do pretty well against Missouri. Coming off of losses to Florida and Kentucky, Mizzou desperately needed a strong performance at Ole Miss, but the Rebels made that quite difficult, going on runs of 9-0, 11-2, and 12-5 in the first half and taking a 15-point lead into halftime.

To their credit, the Tigers would bounce back. They cut the lead to nine points two minutes into the second half, then two a few minutes later. When Earnest Ross made a 3-pointer with 3:28 left, Ole Miss led by just one, 79-78. But they couldn't get over the hump. A quick 9-2 run all but finished Mizzou off, and Ole Miss held on, 91-88. Henderson finished with 29 points with 8-for-15 shooting from 3-point range. It was the last time he would shoot over 50 percent from 3 for the rest of the regular season.

6. The reserves come up big 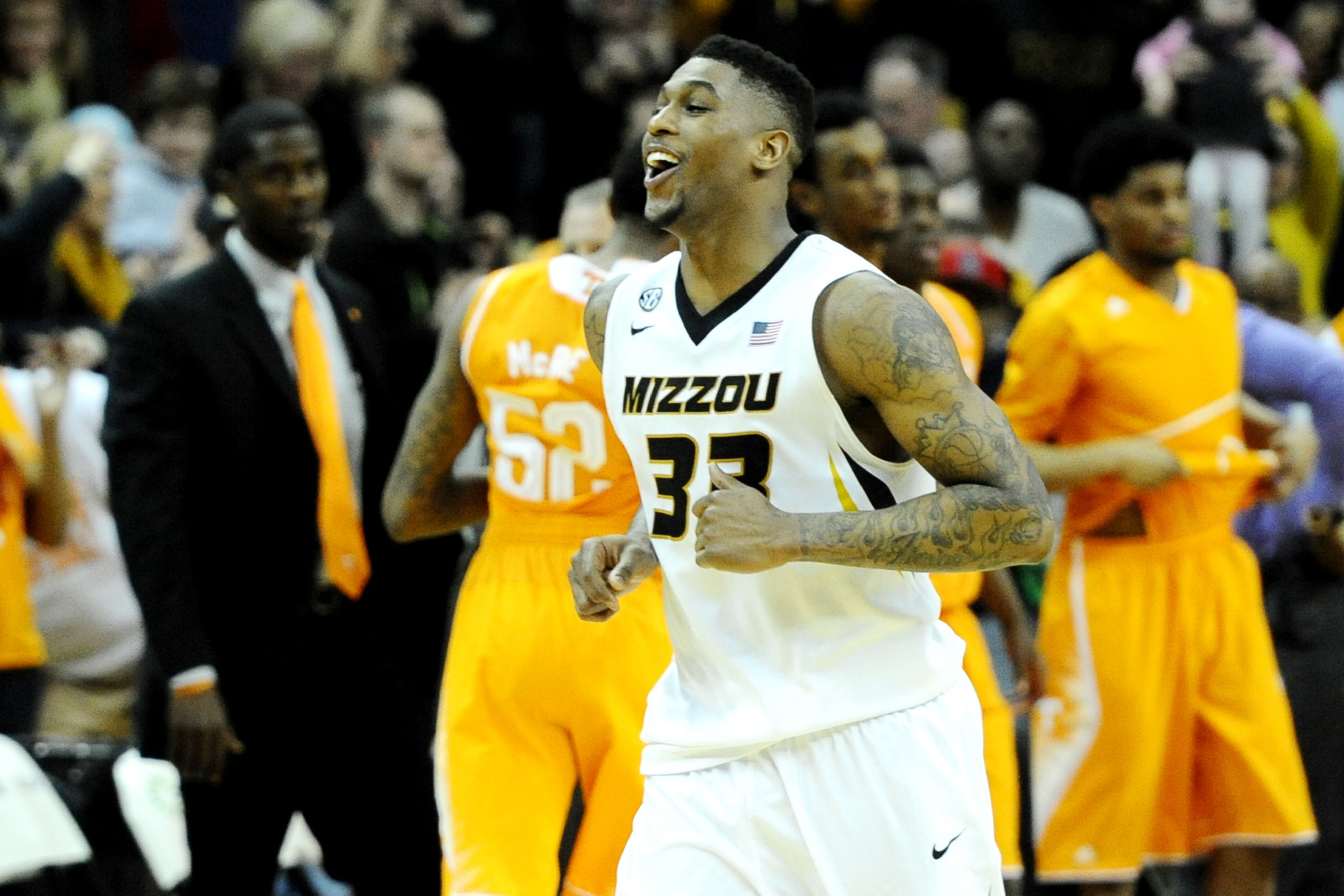 Following a tight home win over Arkansas, Mizzou stood at 17-7, 5-6 in conference play. The Tigers desperately needed home wins over Tennessee and Vanderbilt to keep hope alive for an NCAA Tournament bid, and they got it ... barely. Against Tennessee, they built a 24-11 lead, then watched it trickle away. It was just 66-65 heading into the final four minutes, and while Mizzou rebuilt a six-point cushion, it was just 71-70 with 18 seconds left. Jabari Brown made two free throws, and after some strange clock issues, Brown stole a pass with four seconds left. Johnathan Williams III made two free throws to salt away the win.

Tennessee's bigs provided an awkward matchup for Mizzou in both games this season, but in Columbia, the Tigers got key contributions from Torren Jones and Keanau Post (combined: 29 minutes, 12 points, five offensive rebounds) and somehow survived.

Mizzou held off Vanderbilt by three points in one of the strangest games of the year and moved into the final five games of the regular season with one primary goal: go 3-2, 4-1 if possible. That meant winning two home games and taking at least one game on the road against Alabama, Georgia, or Tennessee. Alabama was easily the worst team of those three, but a 10-3 run late in the first half gave the Crimson Tide a 42-35 lead at the break. They led by as many as 11 points in the second half, but as was customary, Mizzou rallied. They got to within 61-60 with seven minutes left, but Alabama finished in style, putting the game away with a 14-3 run.

Reserve Levi Randolph made an improbable five of seven 3-pointers ("improbable 3-point success" was certainly a theme of the season) and led the way with 33 points. He had averaged just 3.4 points per game in the previous seven games. Mizzou would be thumped by Georgia in Athens three days later, and after wins over Mississippi State (by a lot) and Texas A&M (by one), Mizzou got blown out in Knoxville, 72-45.

If you want hope for the future, you start with this game. In the Round of 12 against Texas A&M in the SEC Tournament, Earnest Ross shot 6-for-17, and Jordan Clarkson committed six turnovers, faltering drastically down the stretch. Jabari Brown fouled out, and after a series of mistakes, at both the end of regulation and the end of the first overtime period, Clarkson fouled out early in the second overtime.

With three freshmen and a sophomore on the court, however, Mizzou pulled away in the second overtime. Johnathan Williams III made two free throws and a jumper, Shane Rector (playing in his first real, competitive minutes in a very long time) logged a pair of steals, and Wes Clark made four of six free throws, and Mizzou survived, 91-83. 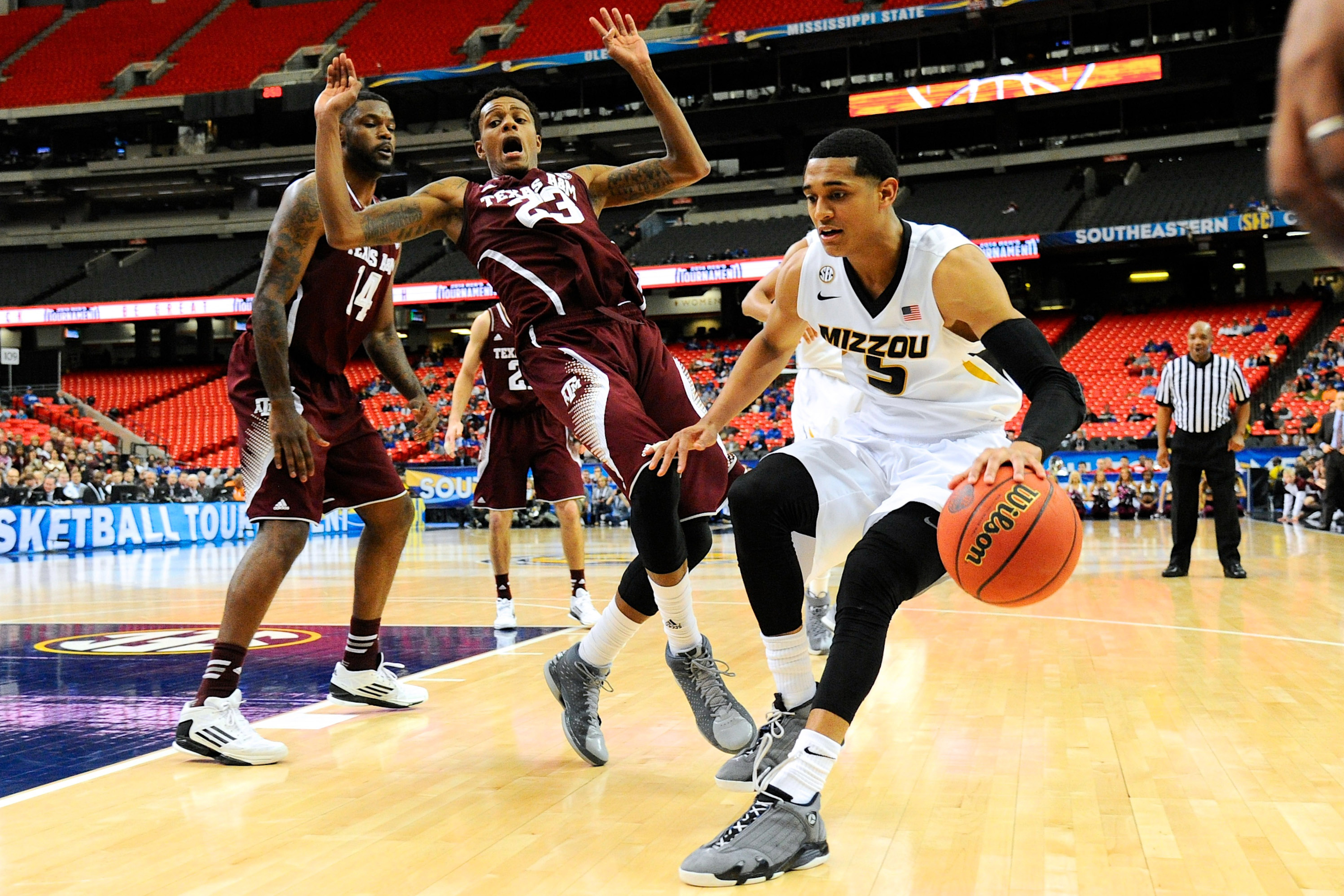 A late fade against Florida the day after Texas A&M finished off any hopes of Mizzou reaching the NCAA Tournament. In the first round of the NIT, Davidson came to town to face a handcuffed Tiger team dealing with suspensions to Tony Criswell, Wes Clark, and Shane Rector.

The Wildcats live and die by the 3-pointer, and a pair of long-range spurts helped to give them a 56-43 lead early in the second half. Clarkson still wasn't playing well, and for the fourth time in six games, Mizzou was shooting terribly from 3-point range. But Jabari Brown and a series of and-ones helped the Tigers to close the gap, dunks by Ryan Rosburg and walk-on Danny Feldmann finished the comeback, and free throws by Brown, Ross, and (surprisingly) Rosburg finished off an 85-77 win.