#SECBASKETBALLFEVER: End of the Line Edition

The SEC regular season comes to an end, with celebrations, frustrations, and suggested libations.

Share All sharing options for: #SECBASKETBALLFEVER: End of the Line Edition

Saturday's games closed the book on the 2014 SEC men's basketball regular season.  A few teams go into the postseason filled with happiness and hope, others are left figuring out what went wrong, and some are ignoring it altogether because it's time for baseball/softball/spring football, y'all.  Here's your rundown of what happened in the SEC this weekend, and how SBN's team blogs felt about it.

A generally unpleasant-to-watch game saw the Commodores lose a 16 point lead and suffer a Senior Night loss to LSU.

"Thrilled" is probably the wrong word to describe And the Valley Shook's reaction, but they tried to find the silver lining in a ugly game.

I'll give a mild bit of credit where it's due, though. LSU looked like a defeated team late in the first half. WIth little left to play for and trailing by 14 on the road, the Tigers could have packed it in. They didn't do that, marching back into the game with a spurt at the end of the half and then matching Vandy until grabbing control late. That's the biggest positive sign from this game. LSU still has a little fight in it.

Anchor of Gold bemoans the many crimes against the sport on display Thursday night.

The two teams didn't make anything look easy. Vanderbilt and LSU combined to shoot 31.9 percent from the field in a game that will be discussed by masonry apprentices for years to come. Odom and Fuller started hot, but then took a long look into finding just what was cooler than being cool en route to a combined 6-33 performance from the field.

The Gators wrapped up the first 18-0 season in SEC history with a resounding destruction of Kentucky.  And yes, they cut down the nets afterward.

Alligator Army watched as Florida's senior class took to their home floor for the last time, and they didn't disappoint.

And on the floor, all four Florida seniors were visibly emotional — not choked up, not teary, but certainly happy and proud — for their final introductions to a sellout crowd of Gators who have come to love them as unconditionally as they love each other.

But after that moment, it was Florida's turn to make the other team cry. Again.

A Sea of Blue saw a lot of the same old inconsistent play that has plagued the Wildcats this season.

Kentucky today was not significantly different from Kentucky all season long. They have struggled to execute on offense and refused to play defense for longer than 20 seconds or so. Kentucky played 13 minutes of good basketball, 8 minutes of so-so basketball, and 9 minutes of poor basketball and 10 minutes of really bad basketball. Florida, on the other hand, had about an 8 minute stretch where they couldn't stop Kentucky. Other than that, they played very, very well.

The Rebels topped the Commodores on Marshall Henderson's Senior Night despite a rare cold night from the field.

Though a victory, most of yesterday's game seemed out of reach. At one point, the Rebels trailed by twelve during the second half, and the game looked like it would see the Rebs end the season with a disappointing sub-.500 record in SEC play. Marshall Henderson, however, sparked the Rebel comeback, scoring 11 points in the second half of a senior night devoted solely to him as the Ole Miss basketball program's lone senior.

Here's Anchor of Gold's game thread. A decent turnout, given the Commodore's recent bottoming out.

No Frank Martin, no problem for the Gamecocks, who easily picked up a road victory over a woebegone Mississippi State team.

Carolina scored 1.14 points per possession in large part thanks to rebound 55% of its misses, with its 21 offensive rebounds giving them 15 extra field goal attempts on the evening.  Despite the extra 9 free throw attempts for State (as well as the better shooting, with State going 17-25 from the line compared to Carolina's 8-16), the Gamecocks' significant advantage from the field out-did any other issues.

We got a preview from For Whom the Cowbell Tolls! It's kind of sad when a Mississippi State victory is confidently predicted, and there was no action from commenters, but it did give drinking recommendations.  Here's to you, Mississippi State basketball blogger.

The Tigers went on a 10-4 run over the last 4 minutes to grab a rare win for the visiting team in Reed Arena.

We didn't get anything from College and Magnolia.

...nor did we get anything from Good Bull Hunting.  It's been that kind of season for these guys.

The Tide rolled all over the Razorbacks on Trevor Releford's Senior Night in a game that was never close.

Arkansas came into Tuscaloosa as the hottest team in the SEC outside of Gainesville, Florida, having won 8 of their last 9 conference games to improve their record to 21-9, and put themselves in position to make the NCAA tournament. They ran into a buzzsaw led by mercurial senior guard Trevor Releford in his last game in Coleman Coliseum. Releford scored 24 points to - once again - lead the team and move into fifth place in all-time Crimson Tide scoring. Releford passed former All-American Jerry Harper and likely passes Buck Johnson next. Releford now has 1,862 points in his stellar career. The Kansas City native is the all time leader in steals for Alabama and is now number one all time in games played. Releford has now scored in double figures every game this season as well as 32 games in a row over two years, and 100 times in his career.

Pretty much everything went wrong for Arkansas, including their supposed main strengths, says Arkansas Fight.

One particular stat that blows my mind is that Arkansas, despite missing so many more shots than Alabama, still lost the offensive rebounding battle 12-8. Think about that.

More fun stats: Arkansas was destroyed on points in the paint 42-6 and 29-11 in bench points. That bench points stat is completely unacceptable. The Razorbacks pride themselves on having an effective bench and Alabama is not deep at all.

You can find a highlight reel on Alabama's site here.

Missouri found out the hard way that it's not a good plan to pin your hopes for an at-large bid on beating a talented team on a serious hot streak.

There's a chance to see what our best basketball can really do if we show up for Saturday's assumed date with Florida.  To do that, the Vols need one more win, one more game for Cuonzo Martin to put a lot of conversations to bed and the Tennessee program to move forward.  But Cuonzo has his guys playing so well, the larger conversation is changing from survive to advance.  Florida is clearly the best team in this league, but right now there's no one else you'd rather be than Tennessee.  The bubble is full of teams moving in all directions, but only the Vols have won four straight by an average of 25 points.  There's peaking at the right time, and then there's this.

The Bulldogs put a cherry on the sundae of their surprising season by picking up a road win at LSU.

Georgia may not make the NCAA Tournament, says Dawg Sports, but they're playing with house money at this point.

The win caps off an improbable run through the conference for the Mark Fox's club. They still need to do some major damage in the SEC Tournament to have a chance to earn an NCAA bid but they are at least in position to do so.

Here's And the Valley Shook's gamethread. It's not much of a conversation.

First off, all credit to Florida for a truly impressive run through the conference season.  The SEC might not have been at its best this season (to put it lightly) but even then, it's hard to win night in and night out.  They will take the #1 seed into the SEC Tournament, with Kentucky, Georgia, and Tennessee rounding out the top four.

Hey, speaking of that tournament: 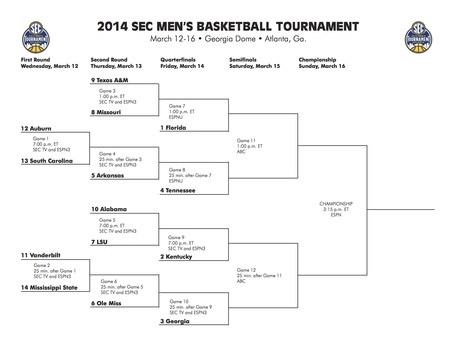 Print it out and take it into the office Monday!  Everybody will love filling it out!  There's even a prize of zero billion dollars for getting every game right!

Joe sees 4 SEC teams in the bracket.  Yes, four!  Tennessee and Arkansas are both visiting Dayton, but still.  Florida is a 1 seed, as it has been for a month or so.  Kentucky is falling, but staying in as a 7.  Missouri is still hanging on to a Next Four Out slot here.

Similar story here, with 4 SEC teams and the Vols and Razorbacks in the First Four.  Florida retains a 1, while Palm is slightly more complimentary to Kentucky, giving them a 6.  Palm seems to be more bullish on Missouri than most, still giving them a First Four Out slot.  (And yes, this is from this morning.)

And things are pretty similar here.  Seems we're approaching a consensus.  Florida: 1, Kentucky: 6, Arkansas and Tennessee: both play-in 11s.  Missouri lies in the next four out.

Year2 at Team Speed Kills breaks down the SEC Tournament. Spoiler: it's not friendly to Missouri.

Game of the Half-Week

There was no Game of the Half-Week this week, owing to having run out of schedule.  Missouri's next opponent is Texas A&M in the SEC Tournament Thursday.  I dug deep into the archive to find records of the last time these teams played, and here it is! It's amazing how long things can stick around on the Internet, isn't it?

The regular season is done, but we aren't!  Come back next week starting on Thursday and running all weekend for #SECBASKETBALLTOURNAMENTFEVER!  It's the #SECBASKETBALLFEVER you know and love, with a postseason twist!