A warning to the SEC: St. Louis is the Gateway City

You should know the risk you're taking.

Share All sharing options for: A warning to the SEC: St. Louis is the Gateway City

Mizzou received some welcome news when Mike Slive announced St. Louis had been granted the SEC Men's Basketball Tournament in 2018. The magnanimous Uncle Mike gave the best fans in basketball and Mizzou fans in general a nod for their continued support of one the league's most popular sports.

It should be noted that the tournament will only visit St. Louis once between now and 2025 and for that brilliant decision I must applaud Uncle Mike. For one, "the Lou" can not hold a candle to Nashvegas, which is, by all accounts, a hot bed of excitement and opportunity for visiting fans. Gosh, they even have a totally not ripped off sign:

Sure, St. Louis hosts "Soulard," a Mardi Gras themed celebration in mid-February, but I've been and it's precisely what you'd expect from a city who's mayor declares an official day for cardboard.

But there's another, far more sinister reason Slive only risked venturing to St. Louis once.

An interesting link was brought to our attention by our newest contributor Sam Snelling, who you maybe known by the name of trent714.


It's heatmap breakdown of where colleges recruit basketball players. Below is a screencap from, filtered by SEC schools and count as well as the locations of the most recent SEC basketball tournaments, Atlanta, Nashville, St. Louis and 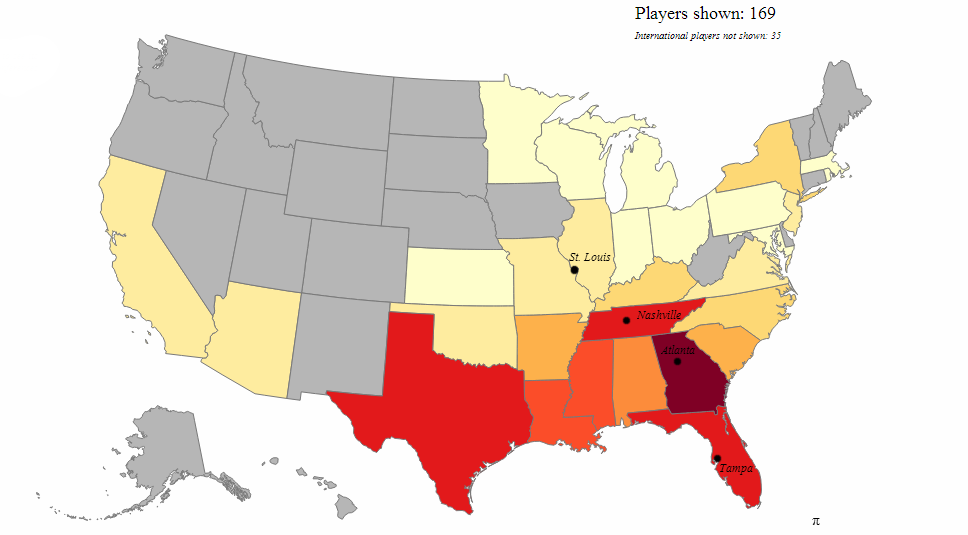 The obvious observation is that SEC schools tend to recruit from inside the SEC footprint. That footprint doesn't really appear to include Missouri, Illinois, or heck even Kentucky! Tennessee falls well inside the heatmap and the SEC blueprint, surpassed only by Georgia. Recruiting from within your own state is not a guarantee of basketball success, the stats bear that out:

Granted Georgia and Tennessee overachieved this year, but that's more the exception than the rule. Remember, Tennessee and Alabama are not far behind Mizzou in one dubious record

Most NCAA Tournament appearances without reaching a Final Four:

However, if you look closer you'll notice the sinister pattern made evident by the data. Everyone knows that St. Louis is commonly known as the "Gateway City", but just like listening Led Zepplin's "Stairway to Heaven" backwards reveals backmasked dark meanings, so too does reversing the polarity of St. Louis' famous "Gateway".

The evidence is so obvious but I'll draw you a line: 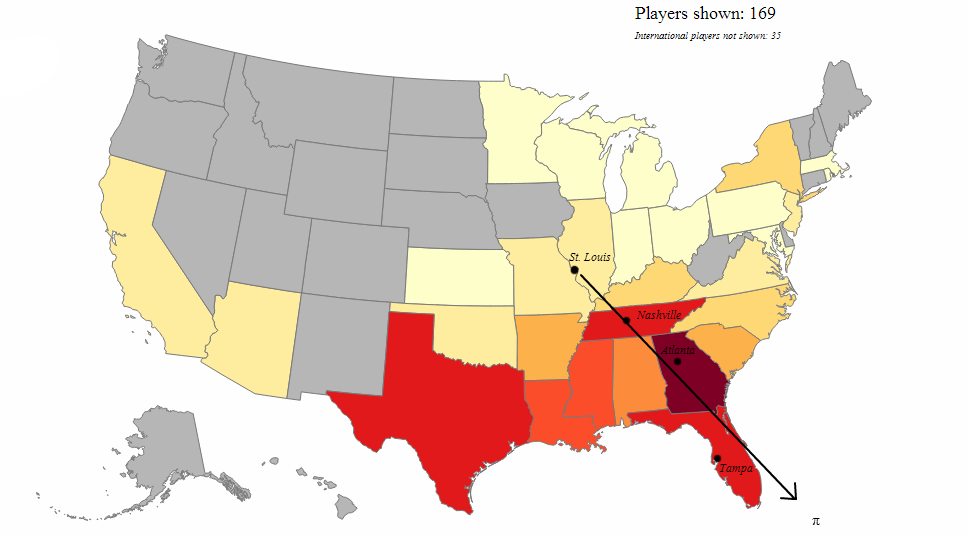 That's right! If you ignore what can only be a red herring in Tampa, St. Louis proves to be the "Gateway" to a long hidden secret path. One so terrible that if it's unleashed could prove to have a horrifying impact across the globe.

Allow me to enhance:

I recognize that symbol, but it took me a minute to remember.

I didn't come this far to turn back just because of one Sandra Bullock movie so I did what any reckless internet denizen would have...