So last week I posted my idea for a scoring system to compare college football rivalries, and I applied it to the SEC. I’m back today to take a look at how this system would apply to more rivalries, namely Missouri’s traditional rivals from the old Big 8, and some prominent national rivalries.

First though, some minor corrections. A few commenters from last week pointed out errors in the numbers I used. Most of these are due to a quirk in the database used by Stassen’s site (my source for games played and win percentage). For whatever reason, that database chooses to ignore seasons when a team was not considered "major" (equivalent to current I-A), even if they are a prominent I-A team today. So for example, Missouri’s first several seasons are left out. I corrected this with numbers from the College Football Data Warehouse, which appears to be a more reliable source. This resulted in several rivalries gaining a few games (and some losing a few), and minor differences in win percentage. In several cases the total rivalry points were affected, so here’s a look at the Top 25 (26 with ties) SEC rivalries again with the corrected numbers. 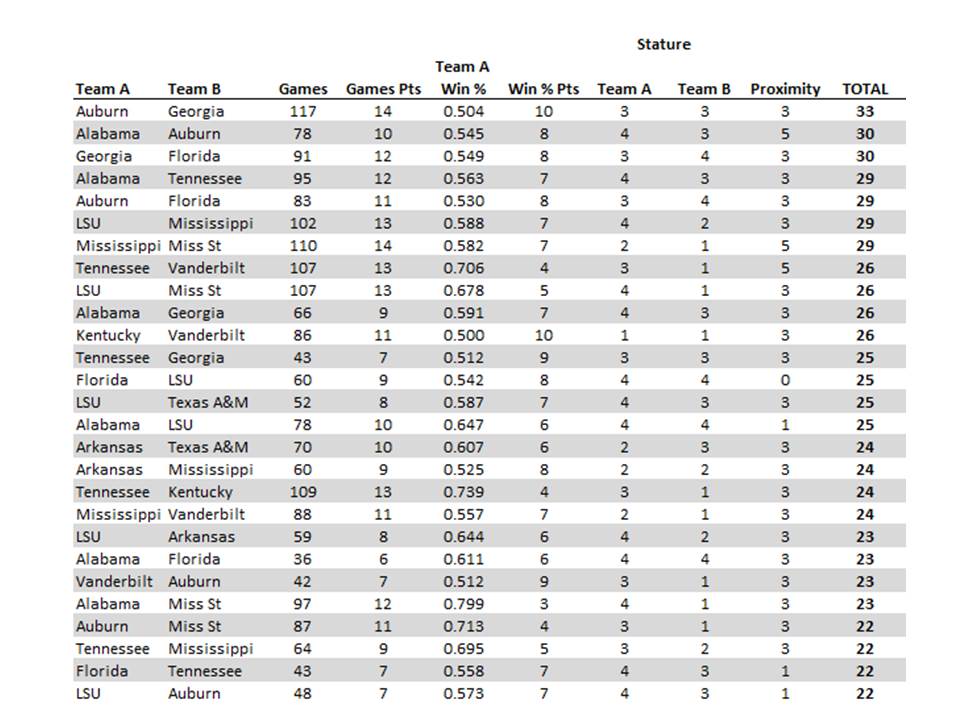 Okay, with that out of the way let’s move on to Missouri’s rivalries. Missouri has a long and illustrious history with several teams from the old Big 8, notably our foes to the west:

So, the Border War matches the Iron Bowl and Georgia-Florida in significance! Sounds good to me. And Missouri’s rivalry with Nebraska is second, thanks both to a long history and a more recent surge in competitiveness in the years before the Huskers left for the Big Ten. Also, note that all seven of these are on par with the Top 25 rivalries in the SEC.

Finally, let’s look at the top rivalries across the national landscape. I googled "top college football rivalries" and scored several of these for comparison. The Top 25 are listed here. It’s probable that some others out there might score this high as well, and were missed by the popular rivalry listicles. Something like Wisconsin-Michigan might be pretty high if I ran the numbers, but I haven’t had a chance to be that thorough. If you mention some compelling candidates in the comments I will check them out. 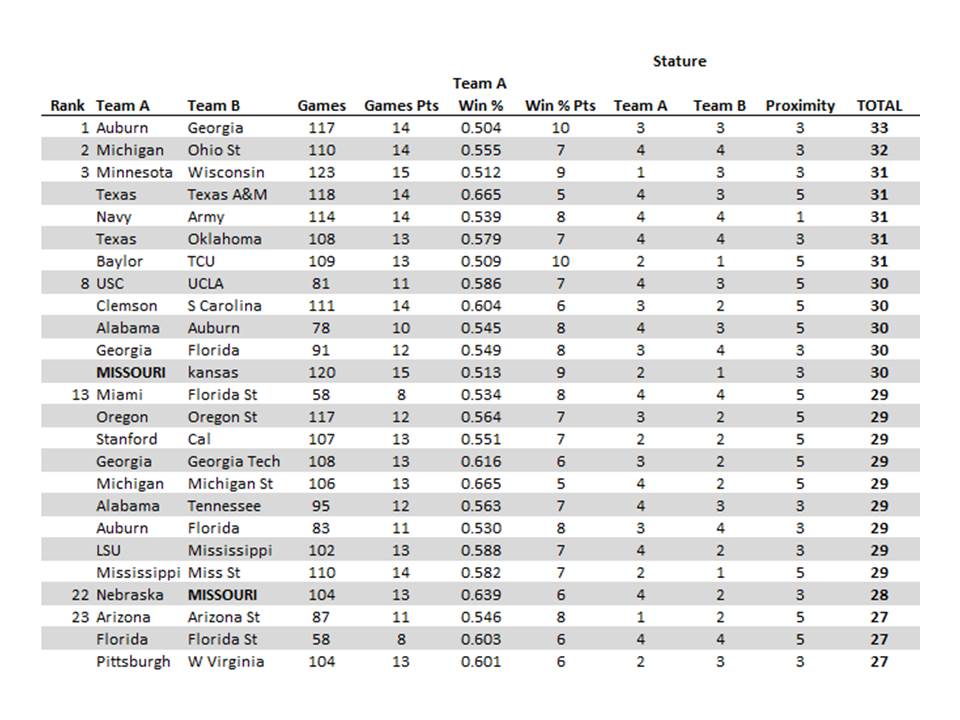 It’s pretty fascinating that Auburn-Georgia scores higher than all the notable rivalries. For whatever reason, probably because they have been in separate divisions for 20+ years now, this rivalry just doesn’t get the press that so many others do. And maybe it really doesn’t belong at the top. For example, the difference in points between this matchup and Michigan-Ohio St is found in the win percentage points alone -- Auburn and Georgia just happen to be very evenly matched over the life of a long series.

Also a note about Army-Navy. Neither of these schools were included in Stewart Mandel’s pecking order hierarchy, so I had to wing it. Obviously they are currently pretty small-time in football, but they still carry national cachet just in terms of recognition and rooting interest. So I chose to rank them both highly in Stature. Their proximity score is also less meaningful given the national scope of their fanbase, but they certainly don’t get any help from geography, and to counteract my generosity in Stature I gave them a low score (1, which happens to reflect their true proximity). That’s all debatable obviously.

Our favorite rivalry here at RMN has some pretty respectable bedfellows, as Mizzou-kansas equals USC-UCLA, Clemson-South Carolina, Alabama-Auburn, and Georgia-Florida. Good stuff. Elsewhere, a pleasant surprise to me was Baylor-TCU, I really had no idea this was a significant rivalry, but I think the fans would confirm this.

So this has been a fun exercise! When I get a chance I’ll spend one more post on this topic, circling back to the SEC and using these scores to consider revised SEC scheduling. And I still welcome feedback on the scoring system, I’m still not 100% sold on it. See you next time!

Which college football rivalry do you think should rank first?