Or my preferred title: "Why Kim Anderson should hire me as his assistant so I can show him all of this stuff"... Part Two

Share All sharing options for: How Mizzou builds a championship basketball program, Part 2

It's probably important to read the first part of this series before you jump in to season two. But after a mostly successful first season as Missouri's head basketball coach, Kim Anderson looks to gain some momentum going into year two. Recruiting is a large part of that. 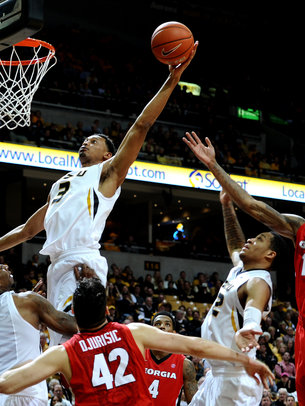 "I see no reason why 20 wins and an NCAA tournament bubble isn't possible."

With two scholarships to give from guys that aren't likely to give you much more than about 30 minutes a game next year the impact of the next freshman class can be limited. Still, ideally you get Jimmy Whitt. Whitt is a consensus 4-star top-80 6'2 combo guard from Columbia Hickman. He's an important cog for many reasons because he can provide support from multiple positions on the perimeter as a freshman. He's rising quickly this summer and could see his stock rise maybe into the 50's before too long. He would also be the first big in-state recruit for Kim Anderson. For that reason alone he's important to Mizzou.

Then, for the long term sustainability of the program a good big man is your next target. There are a ton of very highly ranked and talented centers and power forwards in the 2015 class. However Missouri is unlikely in the race for any of them at this point. And even if they are, there has been little to suggest that. There is an offer out to 4-star Alex Owens, a 6'8 Power Forward from Orlando but that was when Haith was the coach. Another Haith offer was Kaiser Gates, a 4-star 6'7 Small Forward from Georgia. There is no way to know if those offers still exist now that the coach has changed, but it's probably safe to assume that we aren't in the running for either player. Keeping Tim Fuller on staff may counter that argument, as both Owens and Gates are from the Southeast, where Fuller has already plucked Jakeenan Gant.

While you can get away with Johnathan Williams III at the center spot, not having a big body who can eat space and few minutes hurts the depth of the roster

Players to keep your eyes on are some local Missouri guys like 3-star 6'7 Forward Juwan Morgan who could fit into the plans and Missouri has been talking to him. Even without Whitt, Coach Anderson has said he wants to focus more on Missouri players, and Morgan fits that bill. He's ranked in the top 150 on Rivals and has some bounce. Not using that scholarship on an inside presence with some better size might hurt Mizzou a bit down the road as Ryan Rosburg is the last natural center on the roster. While you can get away with Johnathan Williams III at the center spot, not having a big body who can eat space and few minutes hurts the depth of the roster. What would be ideal would be for Mizzou to unearth a guy who simply needs a year or two to develop into a high major contributor. Other names to keep an eye on: Landry Shamet: 3-star 6'4 SG from KC area. OG Anunoby: 3-star 6'7 SF/PF from Jefferson City. Shake Milton: UR 6'4 SG from Oklahoma.

So what does this stepping stone season look like? It's a season where you can get to 27-32 wins, make the NCAA tournament as a 3-6 seed and be playing in the second weekend. Doing all that with a club that will return just about everybody the next year. And 2015-16 can be that year. It's this season I've been eyeing since Cameron Biedscheid decided to transfer to Mizzou to join in a class that already featured Williams, Wes Clark, and Torren Jones with JaKeenan Gant and Namon Wright sitting there with a year under their belt. It's also the season that left me baffled that Frank Haith bailed on Mizzou for Tulsa. He really must have thought he wouldn't be there to reap the rewards by getting fired after next season.

Now as hard as minute projections might be for next season - try two years out! I'm going to attempt it anyway.

First, wherever it says [Freshman Guard], insert Jimmy Whitt and we'll all be happy. Because that's what I'm really projecting. If Whitt is not on the roster the minutes will be doled out differently. I would probably switch [Sophomore PG] with [Freshman Guard] in terms of minutes at the point and that frees up D'Angleo Allen to log some more time as Biedscheid and Wright can log more time at the 2. I don't think it's a bad thing having Allen play more as I think he's going to be good for the long term. That said we're going to play it like Kim Anderson got the biggest Missouri recruit to Mizzou in his short tenure.

That said we're going to play it like Kim Anderson got the biggest Missouri recruit to Mizzou in his short tenure.

As far as the minutes breakdown goes, I think you'll see a heavier reliance on the main 5 of Williams (29), Clark (28), Biedscheid (27), Gant (21) and Wright (21). Bello (20) still gets a heavy does of minutes, and Rosburg (18) is still counted on, but he takes a bit of a back seat to the more talented Williams and Gant. Big minutes from Williams and Gant on the inside is what makes the difference as both those kids maturity will be a big factor. Those seven are quite clearly your top players in crunch time, and that overall experience and lack of reliance on freshmen for heavy minutes is what makes this a stepping stone kind of season. Your freshman guard can still log good minutes (15), Jones continues to play a slightly larger role (12), and you have a relatively tight 9 man rotation. It's possible that you make it to 10 guys with Allen or [Freshman big], maybe 11 on most nights with a few of the backups gaining some traction. Right now I don't have Allen getting that many minutes, but he's going to be an important factor soon.

What's fun about these minutes? It leads to numbers that look like this:

A ScorePP of 224.0 is higher than the median for the last 10 champions. And in line with the North Carolina team of 2005 (granted I'm fairly certain that a few of UNC's 4 star players would have been 5 star players in todays rankings). That's higher than both Florida champions, both UConn champions, and Louisville. It really is a championship caliber roster. And a trip to the second weekend of the tournament confirms that they are close. One thing to remember is that this does not factor in the 9 minutes played by the unknown PG and Allen. A contributor level has to be at least 7 minutes. Otherwise they would drop the score down closer to 200.

So after Year Two, Mizzou is able to finish the season as a top 15 school. Fans are buzzing quite a bit now as the Kim Anderson hype machine gets going. I'll project Biedscheid goes to the NBA after this year. Leaving Mizzou with 3 scholarships to fill. In Part 3 we'll take a look at how Mizzou can build upon the success of Year Two, and what kind of impact that has on recruiting in Missouri and around the country. As well as figure out how that elusive Final Four finally shows up on the resume, along with a shot at a championship.