As we’ve all seen, ever since the SEC expanded to 14 teams there’s been ongoing talk about how to maintain traditional SEC rivalries in football scheduling. The current model the league has agreed on is the 6+1+1 model (six same-division opponents, one cross-division permanent rival, one cross-division rotating) which has been greeted with less than an enthusiastic response. More recently, Clay Travis came up with an interesting alternative that throws out the division alignments and follows more of a basketball scheduling model, with each school facing three permanent conference rivals while the other five conference games rotate. He chose hypothetical permanent rivals based on an effort to "preserve each team’s top rivals", along with a consideration for balancing strength of opponents.

All of this talk about maintaining traditional rivalries got me thinking about ways to evaluate and compare rivalries in the SEC. So I came up with a rivalry scoring system and threw some numbers at the problem. Here I will introduce the scoring system and apply it to the SEC. In a future post I will calculate rivalry scores for Missouri’s former Big 8 rivals and other prominent national rivalries to see how they all stack up.

First, the scoring system. I threw this together pretty quickly and nothing is set in stone, so I welcome suggestions for tweaks. I came up with four criteria that I believe do a pretty good job of defining what makes a college football rivalry important.

First and foremost is the number of games played between the two rivals. Rivalries are all about history and tradition, so other things being equal, teams that have played 100+ times tend to have a stronger, more established rivalry than schools who’ve only met a dozen or so times. Some people might even argue that this is the only thing that should be considered in a rivalry, pointing to pairings like Minnesota-Wisconsin, Army-Navy, or Harvard-Yale that go back to the 1880s or even earlier. I think there’s more to it however.

That brings us to the second criterion: evenness of the matchup. No matter how old a rivalry, there’s just not a lot of enthusiasm if one team has dominated the series. Alabama and Mississippi State have played 96 times going back to 1902. That’s quite a history, but Alabama has won 81% of the games, so it’s not exactly an Iron Bowl atmosphere. So, I awarded points based on how close a series is to 0.500. By the way, I’d like to acknowledge my data source for these first two criteria, Chris Stassen’s excellent database. I don’t know for certain that it is the most official or most accurate source of game results out there, but it has stood the test of time and is perfect for this type of query.

The third criterion is what I’ll call the Stature of the two teams involved in a rivalry. A rivalry between two historical powerhouses (say Ohio State-Michigan or Notre Dame-USC) carries more cachet than more obscure (if longstanding) matchups such as Kentucky-Vanderbilt. This vague notion of Stature is not an easy thing to measure, in fact it is worthy of an entire analysis all its own, but I wasn’t prepared to dive into the deep end on that one, at least not right now. So, I punted and went with a crude but intriguing and I think suitable shortcut measure: Stewart Mandel’s "Kings, Barons, Knights, and Peasants Pecking Order", last updated in 2012. There is plenty to quibble over in Mandel’s hierarchy, and it could perhaps use an update, but I think it serves the purpose for now.

The final factor is I think less important but still worthy of consideration, and that is geographical proximity. In-state rivals always tend to have an extra intensity, and even cross-border rivalries (ahem) tend to carry more weight than more far-flung foes. So that’s thrown in for good measure.

So, here is the full scoring system: 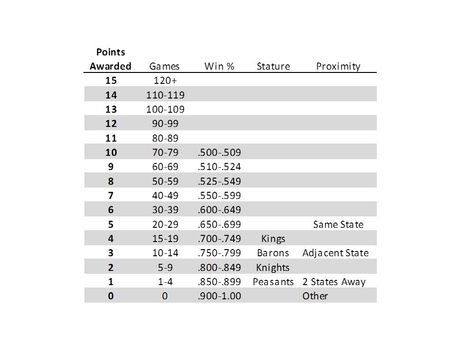 Up to 15 points are awarded for Games Played, up to 10 points for Evenness, up to 8 points for Stature (max 4 for each team), and up to 5 points for Proximity. Maximum total points for the ultimate rivalry would be 38.

So, how do the SEC rivalries shake out? Here are the Top 25 (26 actually due to ties) SEC rivalries based on this scoring system. Disclaimer: I did not score every possible SEC pairing, so it’s possible I may have missed one or two that would score this high, but doubtful (I scored an additional 18, including LSU-Arkansas, Alabama-Florida, etc.; plus all of Missouri’s matchups; and none of those made the cut). 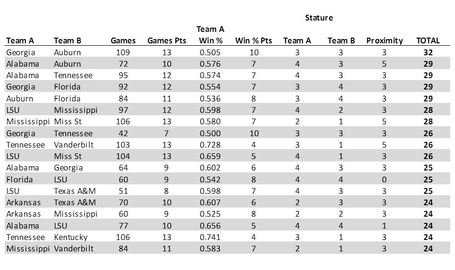 What do we think of Georgia-Auburn scoring higher than the Iron Bowl? I was surprised that Alabama and Auburn have met fewer times than the Tide have played Tennessee, or Auburn has played Georgia, but that’s part of what makes this fun. Also interesting that a couple of Texas A&M pairings actually made the cut despite their lack of history in the SEC, but that is partly explained by their former home with Arkansas in the old SWC. Also note that South Carolina doesn’t appear anywhere in the Top 25; their highest scoring rivalry is with Georgia (21 points). Overall there are a few eyebrow-raisers, but it generally shakes out reasonably. Folks more steeped in the history of the SEC may find more to argue with than I have.

So what does this mean for future SEC scheduling? Well, it’s now more clear than ever to me why the there’s so much emphasis placed on maintaining the Georgia-Auburn and Alabama-Tennessee cross-division rivalries, but note that the next highest cross-division matchup on the list is Auburn-Florida, well above Florida-LSU. Of course you can’t give Auburn two cross-division rivals in the current system, but with something like Clay Travis’ system you could (although interestingly Clay doesn’t resurrect Auburn-Florida).

Finally, here at RMN we’re obviously interested in where Missouri fits into their new home in the SEC, so here are the scores for all of the Tigers’ SEC matchups: 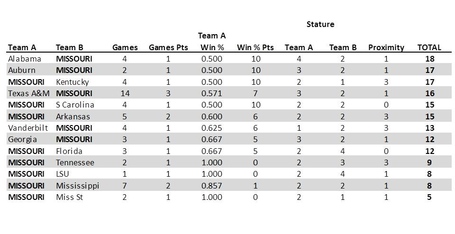 Obviously not much history here, and I don’t think any of us would clamour for Alabama to become our permanent rival. With Missouri (and Texas A&M), it’s really more about forging new rivalries in this conference, rather than concerning ourselves with the past.

So how could this rivalry scoring system be improved? I wasn’t thrilled that it ended up with so many ties, so some way to provide more spread in the results wouldn’t hurt. I think you could also argue that the system should take into consideration more recent history. Some of these matchups may have fizzled in recent years, while others have heated up. So maybe additional points for evenness of the matchup over the past 10 years or something.

That’s enough for one post. Later when I get some time I’ll explore some obvious next questions: how do Missouri’s traditional rivalries with Big 8 teams score in this system, and finally, how about the big rivalries always mentioned on the national landscape? I’ll try to get something together on all that soon.