This past fall, something magical happened on Stadium Boulevard in Columbia, Missouri. A team quietly began a rise to the top of the national rankings by knocking off top teams like Florida and Texas A&M, and finished in the Top 5 Nationally in the final rankings of the season.

No, not the football team.

Coach Wayne Kreklow and the Missouri Volleyball squad were coming off a 19-11 Inaugural season in the SEC where the Tigers finished fourth in a crowded SEC East, and were pegged to finish third in 2013. Opening play the same day the football team downed Murray State right next door, the Volleyball Team handily beat three non-conference foes to claim the Tiger Invitational title. Three weeks later, following a 10-0 road trip and two more Invitational Titles, Mizzou returned home to the Hearnes Center and again swept through three more non-conference opponents for their fourth Invitational Title of the year in the Mizzou Classic. They didn't miss a step in conference play, dominating everyone they played, including Top 25 ranked Florida and Kentucky...twice. The dominance of Senior Lisa Henning and the emergence of Freshman Carly Kan powered the Tigers to a 34-0 regular season and their first ever Volleyball Conference Championship, and the first ever SEC Championship in Missouri history. The season may not have ended with a shiny, new trophy for Coach Kreklow's office, but the school rallied around this unlikely powerhouse as they rumbled their way to the top of the College Volleyball polls, and finished with one of arguably the best regular season performances in Missouri history. Of any sport. I don't think it's too farfetched to say they could very well do it again. Here's why:

Only a Freshman, Carly Kan burst onto the scene after a very impressive performance in the Tiger Invitational, where she tallied 65 kills over the weekend and lead all outside hitters with a .508 attack percentage and averaged 2.92 kills per set, good for a spot on the All-tournament team. Over the next few weeks, she would turn in solid double-digit kill performances against Fairfield, Yale, Middle Tennessee, and South Carolina, hitting above .420 in each match, including a whopping. 706 hitting percentage against the Gamecocks. Kan followed that up with six straight matches with 10+ kills, including a career best performance vs. LSU, racking up 24 kills and 17 digs to push Missouri to 24-0 on the year. She wrapped up her first year at the Zou with SEC Freshman of the year honors, and Top 10 in Conference in Kills and Hitting Percentage (383 and .364 respectively).

So what made Kan so effective for the Tigers this year? I point you to the Highlight Reel from Missouri's win over South Carolina.

Against the Gamecocks, Kan was pinpoint accurate from the floor, nailing 13 Kills on 17 attacks for a career-best hitting percentage of .706. Just how accurate you ask? I broke down her first kill on the reel to show you how pinpoint I'm talking. 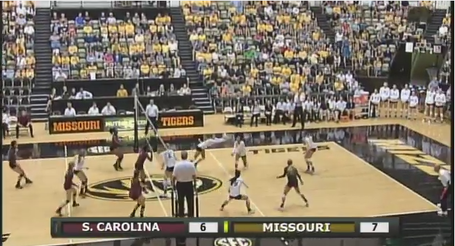 1. Molly Kreklow makes an athletic play on the South Carolina return to keep the play alive 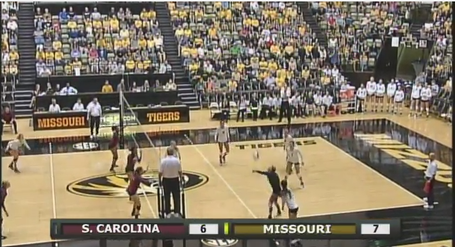 2. Sarah Meister gets under Kreklow's hit, and sets up a nice ball to the waiting Carly Kan 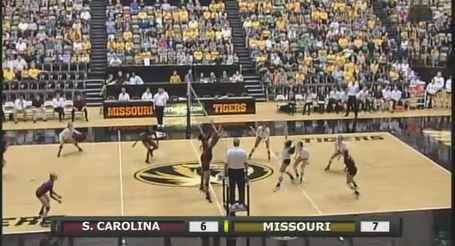 3. Kan steps up, sends a bullet between the Setter and Middle Blocker, freezing both of them in their tracks 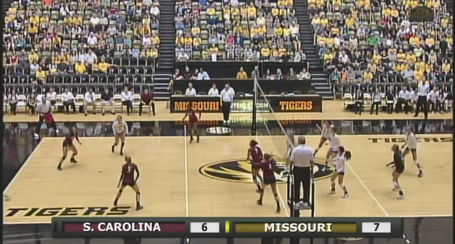 4. Kan's spike lands just inside the white line and it's a point for Missouri

In short, what makes Carly Kan so effective for the Missouri offense is her accuracy. Her ability to hit it perfectly near the line or between defenders won the Tigers their fair share of sets last season. In 36 contests, Kan hit above .400 18 times, 9 of those performances she hit above .500. While only a Sophomore this fall, Kan's name will be up there with the best outside hitters in the conference, and three more years under Coach Kreklow could make her one of the best in Missouri history.

If there was some loophole to get Lisa Henning or Molly Kreklow back for just one more year, I'm sure Coach Kreklow would've found it by now. Both players left a mark in their final season in Black and Gold, with Henning racking up 499 Kills ,and Kreklow serving up 1,480 Assists, each good enough to lead the SEC in 2013. Now, the Tigers have to replace about 25% of their total kills from last season, and almost all of their Assists. The recruiting class of 2013 could be a big help there, with three new Tigers joining the team this fall:

According to MaxPreps, Deeken and Reuter pulled in 253 and 271 kills while hitting .428 and .381 respectively, so if that's any indication on their offensive abilities, they can be a great asset to the Missouri attack. As for Ali, High School Stats are hard to come by, but if she's anything like her cousin, Molly, she'll do a great job dictating the flow of the Tigers offense. For more info on these recruits, check out MUTigers.
Of course, Coach Kreklow will still have an abundance of talent returning in 2014. Senior Whitney Little had the best hitting percentage on the team from the Middle Blocker position at .463, and finished third in the SEC with 139.0 total blocks. The teams' leading Digger will be back on the court with Senior Sarah Meister, who came up with 459 Digs from the Libero (Defensive Specialist) position last season. Sophomores Loxley Keala and Emily Thater are back as well, both were two of the top servers on the team last fall, and could compete for starting spots at Setter and Middle Blocker respectively. 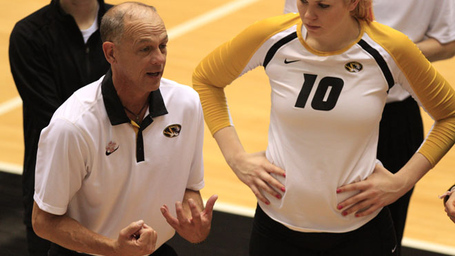 I'm not expecting another 34-0 season from the Tigers, but Coach Kreklow has the tools, and of course, the coaching ability to keep Missouri in the discussion of top teams in the nation in 2014. A young attack lead by an deadly accurate Outside Hitter in Carly Kan, and a defense lead by the Block and Dig Leaders Whitney Little and Sarah Meister. What happened last season was magic, and I think Mizzou still has a few tricks up their sleeve.