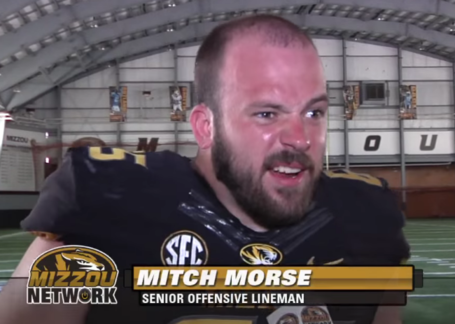 Mitch Morse explains that he wants to be an actor "so badly, it's ridiculous."

Above he demonstrates his angry face.

Jimmie Hunt talks but I just get lost in his eyes.

Markus Golden speaks and you begin to wonder if there's a deep note he CAN'T hit.

This is pretty cool stuff but it did result in a bit of confusion recently.

At the end of the video there's dramatic music and a narrator explains...

"Since 2007, Mizzou football is the only BCS football program ranked in the top 5 in academic performance, and top 5 in NFL first round draft picks, and top 10 in total wins, and the only program that can make those claims."

On the Mizzou website, next to a big picture of Justin Smith it says this:

NFL PIPELINE
If there's anything that Mizzou takes pride in, it's the pipline they've created to the pros. So many players have been readied for the NFL by way of Gary Pinkel's program, many of them being selected in the first round.
Since 2007, the Tigers are in the top 5 of total draft picks. Since 2009, Mizzou has had as many first round draft picks as South Carolina, Auburn, Ole Miss, Arkansas Kentucky and Vanderbilt combined.

Besides the drewdering of "pipline", our friends over on RockyTopTalk disputed some claims:

More to the point-

None of that is actually true. Yall produced 13 draft picks ‘07-’13 which isn’t even top 5 in the SEC, and won 65 games, tied for 11th nationally and 16th in winning percentage. But hey, #proprietarystats, amirite?

And since I have it in front of me, we can see how Mizzou stacks up against the rest of the SEC between 2007-2013

For those scoring at home (6) first round draft picks is actually good for... 5th!

Then we can look at the "top 10 in wins" confusion. Via the source provided:

You'll notice that Mizzou has won 65 games, tied with BYU, Texas, Florida, Wisconsin, and Georgia. There's another bunching of teams at 66, TCU, Cincinnati and Oklahoma State and one more at 74 with Alabama and Oklahoma.

Well, would you look at that! Mizzou indeed ranks in the top 10 in wins since 2007. As far as that dig about 16th in winning percentage, I had to Control+F "Tennessee" to find them tied for 69th with North Carolina State and South Florida, above only Mississippi, Vanderbilt and Kentucky.

(2013) Below is a rundown of the latest multi-year Academic Progress Rate scores for the 14 SEC football programs:

Mizzou in the NFL