It's one week before Mizzou Football's Fall Camp and here at Rock M Nation we aim to provide you with the tools you need to have the clearest picture of the 2014 football team.

I want to begin by giving a huge thanks to qf1976 for all his hard work on this project.

I'm a visual learner, and as such I had an idea for how to better talk about football rosters, formations and depth charts. Along this line I approached some folks in the Rock M community and more than a couple responded with interest, it just turned out that qf1976 ("quiet fan 1976" - you probably recognize him because he's such an early riser and fan of biking) had the time to commit to this project. We had dozens of emails and at least one "working lunch" where we talked about formations, specifics and who's playing in what position, all the while knowing that all these things would be subject to change on a weekly basis.

I wanted to have a way to visually display depth charts in a manner I couldn't find elsewhere on the internet, because as nice as words and numbers are, it's easiest to look at a picture to tell a story. I wanted to start to tell this story during Mizzou's Fall Camp which begins next week, but I won't be near a proper computer so I'm giving you an early preview with a promise that A) There will be more depth charts with more formations and B) We'll be adding in the incoming freshman as they perform and move up the ladder. 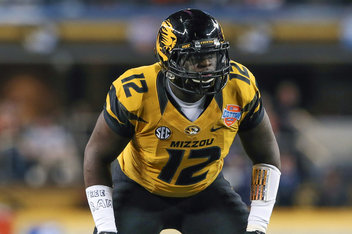 A couple weeks ago, Bill C. gave us an explanation of what the released depth chart meant.

The other thing is, I think this will be a cool game-day post that will provide people an easy way to pull up on their phones and discuss during tailgates.

I could probably spend a lot of time talking about proper terminology and team-specific labels for plays, formations or positions, but I just wanted to use the most intuitive and common ones. I'll leave in-depth explanations to the pros:

I use these terms when explaining playbook diagrams, but they are really out of date. The terms are holdovers from T-formation offenses, in which the flanker was often one of the backs who reached the flanker position via presnap motion. Modern offenses use letter names for receivers: X and Z for the starting receivers, Y for the tight end, letters like F, H, or W for third, fourth, or fifth wideouts. Different systems have different preferences. In one system, the X receiver is typically on the left, Z on the right. In others, X is usually on the line of scrimmage, Z off. As offenses become more complex, even those in-system generalities get blurred.

Instead of explaining the difference between an X and a Z receiver, which is nearly impossible, let's go over the advantages and disadvantages of each position. A receiver on the line of scrimmage can release immediately into his route, and he is in good position to block his defender at the line. On the downside, he can be jammed easily. A receiver a yard or two in the backfield has extra space to beat a jam, which is why smaller receivers are often "flankers."

Let's start off with the obvious, Mizzou lost a lot from last year's team

I highly recommend re-reading Morrison's stat breakdown since it's Saturday and you're already hankering for some football-related content.

Losing that much from the offense can cause people to look at the roster and wonder who's in line to step up. The names have been discussed for a while, Bud Sasser, Jimmie Hunt and Darius White are the likely starting 3 "X" "H" and "Z" receivers. The running backs are clearly 1a and 1b of Russell Hansbrough and Marcus Murphy. Maty Mauk is obviously in line to start behind an offense line that sees Mitch Morse replace Justin Britt and Anthony Gatti replacing fan favorite Max Copeland. And despite popular opinion, Mizzou even fields players at the Tight End position, and barring injury this year perhaps, even more heavily than in years past. On defense, we already know what Mizzou is replacing - a lot of character and production that came in the form of Andrew Wilson, E.J. Gaines, Kony Ealy and Michael Sam. Michael Scherer, Aarion Penton, Shane Ray and Markus Golden look to replace those stars, along with notable returning Tigers Braylon Webb, Kentrell Brothers, Lucas Vincent and Matt Hawk Hoch. Waiting to prove they're capable of stepping up are a group of players that die-hard depth charters are familiar with: Duron Singleton, John Gibson, Darvin Ruise, and basically the entire Defensive Tackle 4-deep. My aim is to build from these simple depth charts, a better understanding of how players are developing, how they're being used, and what matchups are being exploited throughout the season. The goal is to add in play diagrams and defensive schemes but all of this is a work in progress and I'm hoping that our community will be able to contribute as much as they get out of it.

What you see above are just two (base) formations for Mizzou football. Spots are subject to change and formations are bound to be tweaked based on personnel, game plans, etc. If you see something wrong, whether it's where the players are aligned to who's a starter and who's a backup (or even deeper), feel free to correct me in the comments.