Would you look at that? Just yesterday the gang was talking about Mizzou's safeties

In my last piece, where I examined Mizzou's defense in their Cotton Bowl victory over the Oklahoma State Cowboys, I spent a lot of time and bandwidth figuring out something that you probably could have guessed: Mizzou spends a lot of time in the nickel with one less linebacker and one more safety on the field.

Mizzou lined up in the nickel defense 66 percent of the time, according to Dave Morrison over at the Tribune. That jives pretty well with what I saw throughout the Cotton Bowl and last year. Morrison even agrees with me that we'll continue to see a majority of Nickel coverage this season, with Duron Singleton playing the nickelback/safety hybrid position and freshman Thomas Wilson backing him up.

When we hear about "hybrid" players, defensive ends/linebackers are normally what are being referenced. I've seen  "slashers", "rush ends" "jack-backers", or sometimes words with negative connotations like "tweeners" are used. This position has become widely accepted in many football fan's mind because it's something that makes sense and we often visually see via the likes of DeMarcus Ware or Von Miller in the NFL, or any of the assembly line of similar players Nick Saban cranks out at Alabama.

Pinkel with a Pig Brown reference on Tiger Talk. Beautiful.

This allows me to segue pretty neatly into something I find very intriguing: the evolution of the safety position in football. When the typical fan thinks about the safety position, they probably imagine players like ball-hawking Ed Reed and blitzing Troy Polamalu, or perhaps if you don't watch the NFL, you think of William Moore and Pig Brown.

Way back when teams rarely played with three wide receivers on the field at the same time, if a team did line up with someone in the slot, that receiver was the third on the depth chart (read: not great), and therefore defenses could get away covering him with less-skilled defenders. A linebacker might move over or a the safety on that side of the field might move up to prevent a quick pass; either way the quarterback was rarely looking to exploit a mismatch. Fast forward, and modern offenses are either lining up their best wide receiver or flexing out an athletic tight end, both of whom are possibly capable of taking advantage of mismatches. We've seen this with Danario Alexander, Chase Coffman, and others.

The natural defensive reaction is to look for hybrid athletes with the size of a linebacker, speed of a corner, coverage skills of a safety. With good cause, Ian Boyd calls them "first round draft picks" and highlights players like former Texas Longhorn and current New Orleans Saint Kenny Vaccaro.

New Orleans spent last year's top pick on a safety, too—Kenny Vaccaro. The endgame, said Ryan: "The three-safety package comes in a lot more than it's ever done in football. We have five really talented safeties on the roster and we plan on playing them all because they are really good players."

Coaches who find themselves with a player who can physically do everything asked of by this role end up looking really good. It's a bonus when such a player can also be the vocal leader of a team like Ed Reed was at Miami.

That's not just an excuse for me to post one of my favorite videos ever. Combining the physical athleticism, mental aptitude and leadership qualities into one Übermensch is a football coach's dream. In the absence of finding a unicorn, coaches look for athletes who can do either one or two things very well. Boyd calls theses players either "space-backers" or "big nickels", either undersized linebackers not traditionally valued by smash mouth defenses or large defensive backs best suited for covering tall slot WRs and TEs.

I feel like we end up getting confused by semantics and people calling these hybrid roles whatever name fancies them so I'll chime in with what I think makes sense. Hybrid players are either a "unicorn" who can do everything, a "joker" who is good at everything but master of none, or a "star," which is a nice way for me to say they're starters who can play their role.

Over on PowerMizzou, Pete Scantlebury asked if safeties are the "Most Important Position". This article is actually full of player quotes and insight about the position and is what triggered my journey down this rabbit-hole. I recommend checking it out if you can. If you can't, the quote that stands out for me is one from safeties coach Alex Grinch:

All of Missouri's seven returning safeties on scholarship from 2013 measure in between 5-11 and 6-1, and weigh between 195 and 210 pounds. It makes sense, then, that Singleton has laid claim to the nickel position in the three-safety defense. At 6-1, 210-pounds, Singleton is Missouri's biggest scholarship safety, and he said he feels more comfortable playing close to the line of scrimmage in that hybrid position.

Seven returning safeties? All within a very narrow height/weight range? You'll excuse them if they might feel a bit typecast. Stopping to think about the recruit targeted for this position, I realized that 5'11" - 6'1", about 200 lbs is actually a niche size for a football player, perhaps on the lower end. While it's on the high end for the average American male, it's among the lowest in professional American sports. Since Mizzou isn't looking for unique physical specimens, it is further negating the disparity of recruiting against blue-blood programs like Alabama, LSU and Texas.

We've seen offenses incorporating one of the most strictly defined positions in football, the fullback, into other positions in order to give themselves the flexibility to seek mismatches in the passing game. You've indirectly noticed the disappearance of the fullback through the increased emphasis on wide receiver blocking and running back committees. Again from the WSJ article about the Future of Defenses:

The rise in offenses with just one back in the backfield, and no fullback, has made it easier for the Saints to experiment, McGriff said, since they don't have to worry much about big beefy blockers colliding with the safeties

Offenses aren't the only ones putting their athletes in space and asking them to make plays. Homogenizing the size of the ideal defensive back gives coaches the ability to move players around on the field with greater ease and allows them to adapt to modern offensive initiatives like utilizing the Hurry Up No Huddle (HUNH), overloading one side of the field, or motioning players across the formation for better matchups.

Braylon Webb is designated as this team's starting strong safety. It's easy to conflate the word strong for meaning he plays like a linebacker but it just means he's aligned to the strong side of the offense. Duron Singleton plays near the line of scrimmage, while Ian Simon replaces Matt White at the free safety position.

Relying on Braylon Webb's SEC-leading 30 starts of experience and his speed to both play deep coverage and fly in with run support allows Mizzou the flexibility to implement this 4-2-5 defense. Duron Singleton's blend of speed and size makes him uniquely able to matchup against larger slot receivers while also able to set the edge and force fumbles when playing against the run. Ian Simon will be able to play off coverage and make plays from the weakside position.

It's at this point you may realize that this brand of defense inverts the traditional roles of safeties and linebackers. Linebackers are athletes who typically need to be at least 6'2 and 225 pounds while possessing the stamina, strength and speed to take on pulling guards and running backs and cover the new breed of tight ends and slot receivers. The rarity of such athletes means they typically end up at schools like Alabama and LSU, rather than Mizzou. 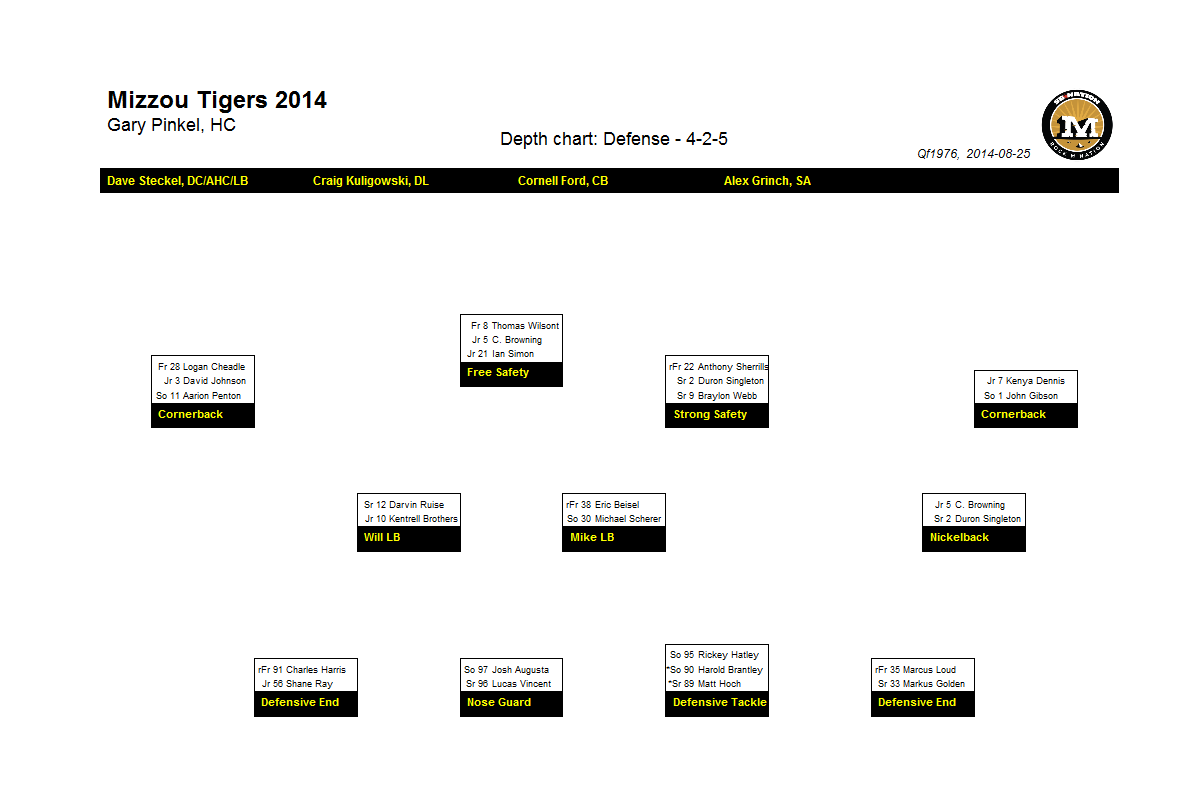 To overcome this, Pinkel and Steckel opt to frequently line up in the 4-2-5, where the two linebackers and the three safeties essentially exchange roles. Duron Singleton at the Nickelback position acts like a Sam, taking on the running game or the TE in coverage, Braylon Webb plays Strong Safety like a Mike, primarily dropping into coverage but instantly available to stop the run, and Ian Simon plays the Free Safety like a Will, where he's able to clean up plays and play off-coverage. Since they aren't playing as close to the line, the safeties can be smaller, lighter, and faster, making plays in space while slightly larger linebackers like Kentrell Brothers and Michael Scherer absorb the punishment inside.

Braylon Webb, Ian Simon, and Duron Singleton will all play starter minutes when Mizzou takes the field on Saturday. Although I predict we'll see Mizzou line up in the traditional 4-3-4 to give inexperienced linebackers more time on the field, I think we'll see Dave Steckel call large doses of 4-2-5, and maybe even experiment with the 3-3-5, and those will be the plays where I'll be paying the most attention.

I think it's highly unlikely Mizzou will do anything fancy against SDSU. It's the first game of the season, and they'll want players to get warmed up and playing at SEC Speed. (Note from Bill: Plus, they tend to stay as vanilla as possible during non-conference play.) If everything goes according to plan, Saturday will allow them to experiment with how this talent stable of safeties can provide Mizzou with greater flexibility on defense.