Jordan Clarkson signs with the Lakers, Mizzou released its depth chart to much fanfare, and Gary Pinkel deserves recognition.

@DavidCMorrison @PeteScantlebury I can think of a seven-letter word that starts with M. ... A certain woolly extinct beast

The Los Angeles Lakers have signed Jordan Clarkson, the 46th pick in the 2014 NBA Draft, whose rights were acquired from the Washington Wizards on draft night, it was announced today by General Manager Mitch Kupchak.

The Los Angeles Times reported that Clarkson, who averaged team highs of 15.8 points and 5.0 rebounds while starting all five games, will be paid the league minimum of $507,336.

Blessed to officially be apart of this organization, will rocking the number 6 #LakerNation #6ix

Michael Sam Bailed A Fan Out On An Unpayable Twitter Bet

Michael Sam sacked Johnny Manziel on Saturday. It was all very exciting. Sam did the "money" thing and everything. And, through a roundabout fashion, a bad-idea Twitter bet turned into a donation to a good charity. Everybody won.

James Franklin, TJ Moe, Jerrell Jackson, Michael Egnew were all cut by their respective NFL teams - did I miss anyone? Did any of them get picked up anywhere?

This is the first installment of a weekly Monday blog on Tiger Tidings that will examine the Missouri football team's upcoming opponent.

But there’s another part of this that goes even beyond the others, and has a good-sized sect of believers within Missouri, and that is a lack of respect for what’s been accomplished by Gary Pinkel.  A man whose accomplishments have earned him a place among college football’s elite isn’t just overlooked nationally among discussions of the best coaches, he isn’t even seen as being a great among many Tigers fans.

5. GARY PINKEL, MISSOURI: Continuing with the long term success theory, Pinkel returned to the big time last year with a splash in only his second season in the SEC for out of place Mizzou. Coming off 8-5 and 5-7 seasons in 2011 and '12, the Tigers won the East, gave Auburn a great game in the SEC Championship and finished 12-2 in '13. That was Pinkel's fourth season of 10 wins or more since 2007 at a school without a lot of talent nearby, much like South Carolina.

For me, the best part had to be either this: 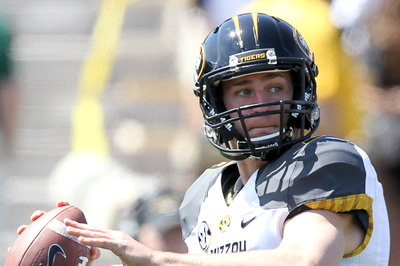 Printz has moved above Berkstresser as Mauk's backup quarterback. It didn't appear as if there was any separation between the two over three scrimmages, but then again I didn't get to see them every day.

* Five true freshmen make the depth: Witter, Lee, Brown, Cheadle and Wilson. The only conspicuous name not on that list is tailback Trevon Walters. And perhaps slot receiver Thomas Richard, who led all players in scrimmage catches and yards. Steward’s health could be a factor in the decision-making process for the freshman. Also, Hunt — Tyler, not Jimmie — was awarded a scholarship for the season, according to some tweets late last week.

Sophomore Harold Brantley, who had been buried as the fourth nose guard on the Tigers’ July 7 depth chart, is listed as the "or" starter with senior Matt Hoch at defensive tackle.

On how having exceptional depth on the defensive line will help replace departing starters...

"I think that is kind of the way our football team is built. We have a lot of starters, but we have a lot of guys who played a lot last year - I mean a significant amount. I mean they didn't start, but they played 35-40 snaps a game. Our defensive line is certainly one of those areas. Our defensive line seems to be strong. Those two young freshman defensive ends are going to have to contribute so we can keep guys in there and keep them fresh. But I think that we can be really good up front. Craig Kuligowski has done an exceptional job - as all of our coaches do - but certainly we have had great success there. Hopefully we will see that experience show up there."

2014 Missouri Walkthrough: When healthy, Singleton is a potential play-maker 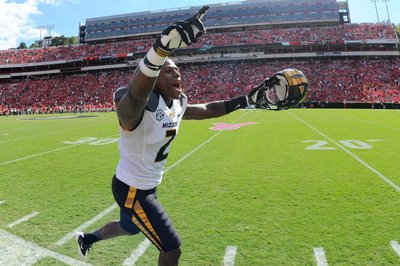 Duron Singleton is a linebacker/safety hybrid - when he stays healthy

"I just love how the brain works and trying to figure out human behavior," said Brantley, a native of Hershey, Pa. "Also, I want to go into the counseling field, trying to help other athletes in my position to get through it." He said there is no mystery, at least physiologically, to what drives him or any other defensive lineman. "It’s all amygdala, fight or flight," Brantley said. "Either you come out low and take on a 600-pound double team, or you’re going on your back.

"He's still a goofball off the field, don't get me wrong," receiver Bud Sasser said. "But when we go out to the practice field, he's all ears and he's all ready to go." Coach Gary Pinkel agreed, calling Mauk an "unthreatening leader."

"Honestly, we don’t talk about it in our meeting room, so if the chip’s on their shoulder, it’s outside of this building," said Pat Washington, Missouri’s wide-receivers coach. "Inside of this building, it’s just work as usual. We understand the things we’ve got to do to be a championship football team. Not one time, not once, have we discussed anything about the people we’ve lost or what people think about us as a group."

"Coach Hill kept on telling Maty that the beards and mullets wasn’t going to happen," Boehm said. "We were trying to push it and we were trying to push it, but he stuck with the answer no. Out of respect to coach Hill and the coaches not wanting Maty to do the beards and mullets, the offense line decided — besides (junior right tackle) Connor (McGovern) — to grow the beards out and shave their head."

Missouri Notes: The "Braylon Webb Talks More Than We Think He Does" edition - Columbia Daily Tribune

Larry Fedora on why he won't reveal his starting QB: "because it bothers everybody and that just gives me pleasure."

It would be one thing if Georgia’s new quarterback were operating opposite a top-shelf defense like, say, Alabama’s (see below). Mason won’t be. Last year, Georgia yielded at least 30 points in eight of 11 games against opponents from Power Five conferences, including close, high-scoring wins over LSU (44-41), Tennessee (34-31), and Georgia Tech (41-34). Then UGA sent not one but two starting safeties packing over the offseason and lost a starting cornerback to transfer. What, exactly, is significantly better about this lineup than the one that finished unranked in 2013 for the third time in the last five years?

MISSOURI Hello, kids. Did you have a nice day at school? I hope you got a good grade on your history test. You know your mother and I don't want to have to put on the headpieces. But we will. We will.

The Ebb Of The Tide: Alabama Is Dead (And Here's Why) - The Smoking Musket

That's right, we're free. At long last, Nick Saban's crimson clad Deathmobile, which has been plowing its way through our college football parade since 2009, is no more. It has been a difficult tenure to endure. One long run-on sentence of murdered trees and tattoos and houndstooth and bad grammar and trailers and more tattoos and ROLL TIDE and boring-ass power football and grumblings about 'gimmick football' and one dour little man who seemed to stare into your very soul as he gave on-field interviews. But now, as we see the mammoth reeling from a two-game losing streak, we see a creature whose  vulnerability hasn't been so evident (or really even present) since its last two-game losing streak over five years ago.

I love going to Columbia, Missouri. That is a really underrated campus. It shocked me when I went there because I really didn't know what to expect. I have four boys, and if they ever ended up saying they wanted to go to Missouri, I'd be very happy for them. It's a clean campus, they love sports, they're diehards when it comes to the Tigers, and I don't think a lot of people realize how good it is. I'd put that on there.

When pizza's on the Internet, you can argue about pizza anytime.

11. Missouri Sure, the baseball stadium in St. Louis was named for beer before stadium naming rights really became a thing, but Missouri has plenty going for it beer-wise besides a certain iconic American brand calling it home. Boulevard is NOT made of broken dreams, but rather delicious beer, particularly their Belgian stuff. And right in Budweiser’s backyard you’ve got standout brews from the likes of Schlafly and Perennial. Have you had the latter's Barrel-Aged Abraxas? No? You should do something about that.