Stadium expansion is just about done, Justin Britt is a starter, and Coach Kool is excited.

This Week in Mizzou Football 2014 Promo

Mizzou Football Tours the East Side

Photo gallery: A tour of the renovated and expanded Memorial Stadium at Mizzou | The Kansas City Star

The University of Missouri on Tuesday held a ribbon-cutting ceremony for the $45.5 million project, which university officials and representatives of contractor J.E. Dunn said would be completed on time and on budget for Saturday’s football season opener against South Dakota State.

And finally for #PFFPlaysOfTheWeek, Dominique Hamilton with an impressive tackle for loss http://t.co/GZ3dJXEhyP via @TwitPic #MizzouMade

For a player like Oriakhi, trying to find his way in the NBA ranks, making an impression at the Vegas summer league is beyond important. He is not only fighting for a job with the Kings, he is also fighting for a chance to continue playing hoops anywhere professionally.

Football - Coach Kool gets it

This reminds me that RMN used to do their own Blog Poll, is this something we might be interested in resuming?

Missouri Tigers (9-3, 5-3 SEC) This defense has lost a few key parts, but I think they'll be okay. Maty Mauk manages to be one of the more known quantities at QB in the East, and a friendly non conference schedule (bye, Blake Bortles!) helps the Tigers cruise to what I think should be a pretty successful third season in our fine conference. Wins: South Dakota St, @Toledo, UCF, Indiana, Vanderbilt, Kentucky, @Texas A&M, @Tennessee, Arkansas Losses: @South Carolina, Georgia, @Florida

25. Gary Pinkel, Missouri -- Pinkel was a quality tight end at Kent State (1970-73), where he was roommates with Jack Lambert and a teammate of Nick Saban's. Pinkel caught 70 passes over his final two seasons and earned honorable mention All-America status as a senior. Pinkel was invited to multiple NFL training camps but did not make a team at the next level. 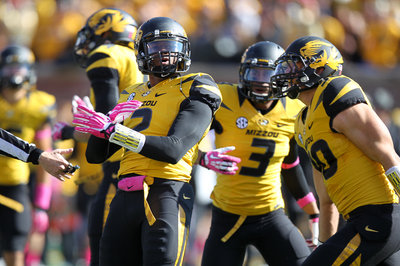 Missouri Coach Gary Pinkel is having his Monday media availability before the season opener against South Dakota State.

Tyler Hunt lands scholarship after paying dues as a walk-on.

For Mizzou kicker Andrew Baggett, finding peace means blocking out past mistakes like missed 24-yard field goals while staying focussed between the uprights ahead.

With new quarterback, receivers and linemen, air attack has been slow in coming together.

South Dakota State Coach John Stiegelmeier possesses the best running back in the Football Championship Subdivision in the form of senior Zach Zenner.

The Missouri football team has lost some of its star wide receivers from last year, and the statistics show a big loss of production. But the Tigers’ new corps, led by seniors Bud Sasser, Jimmie Hunt and Darius White, isn’t pining for the past — instead, they’re approaching the season with hard work and quiet confidence.

Missouri’s Evan Boehm and Maty Mauk, along with any other Tigers willing to join, had planned to grow bushy beards with epic mullets during the 2014 season. However, the coaching staff put the kibosh on the "Beards and Mullets" movement ahead of the Aug. 30 season opener. 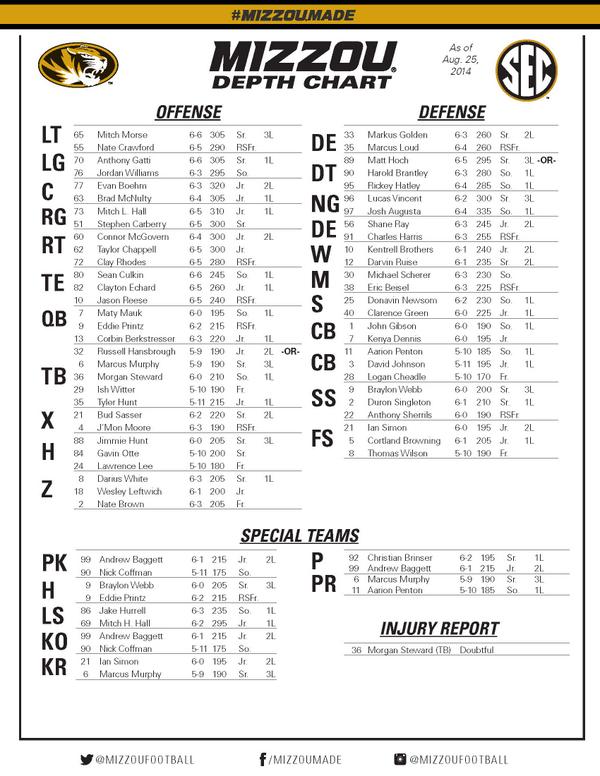 Quarterbacks coach Andy Hill summed up the difference in the race to back up Maty Mauk in one word: "consistency."

All of the spotlight, none of the pressure – The Maneater

"The Missouri interest is new," he said. "I worked with Ben Mauk in the winter and his little brother Maty is the quarterback there. I think that's how they became interested in me. I'm interested in finding out more about them."

It may take some time for Wyoming to adjust from Dave Christensen's newfangled spread schemes to playing in the Power-I, but keep an eye out for Cowboy football to tap into its roots and adapt just enough to maintain a place in the modern game.

Check out this awesome graphic made by bannedwagoner.