We're finally in a place where we can finish the Greatest countdown. But first, as a lead-in, let's #evergreen the top 10 again. Next up: the team that represents the pinnacle and the enigma of the Mizzou tradition.

A team that a majority of Mizzou fans know next to nothing about achieved a championship that many Mizzou fans aren't even aware happened.

Whenever MU fans gather to talk and grumble about the supposed "Mizzou curse" and the futility of hoping things can ever go right for the Tigers, it's a pretty sure bet someone will decry the "fact" that Missouri has never won a national championship. And then someone else will trot out the ultimate nugget of Mizzou trivia, that the Tigers were national champions in 1965 with Indoor Track (usually said in a way that communicates what an oddity that is), and in 1954 with baseball (usually accompanied by a shrug).

@jcsopes when I talk about Mizzou baseball, I don't mention the '54 national title. It's totally irrelevant.

It was so-o-o long ago, hardly anyone is still around who remembers it. If you're reading this online right now, odds are slim you have personal memories from 1954. I don't (I was born three years later). It's hard for Tiger fans in 2014 to wrap their minds around what college baseball, or college athletics in general, was like in those days.

1954 MU Baseball at Rollins Field, via The Savitar

The college baseball season was 8 weeks shorter in the '50s than it is today, beginning in early April and winding up by mid-June.

Missouri's championship season record was 22-4, from their opening game through the College World Series final. They were 17-3 in the regular season, 5-1 in the post-season.

UCLA, the 2013 College World Series Champions, posted an overall record of 49-17. They were 19-7 after 26 games, the number of contests in MU's entire 1954 schedule from start through the CWS Championship Game.

Hi Simmons' '54 team started their season on the road against military teams from Fort Leonard Wood and Sedalia Air Force Base, plus a pair of then non-conference opponents, Arkansas and Oklahoma A&M (now Oklahoma State). (a school that no longer fields a baseball team) beat the Tigers in the Big 7 conference opener, dropping their record to 5-3. came back to win the next day against the Cyclones. That victory began a 12-game winning streak that was only broken by the Tigers’ sole loss in the College World Series (to tiny , the team they eventually defeated in the championship game).

"Nobody ever thought about losing a game."

Back in 2004, as I was doing research for the 50th anniversary day by day chronicling of the Championship Season for SimmonsField.com, I was struck by the relatively unspectacular nature of the team.

The 1954 team is not the best team Hi Simmons led during the glory days of Mizzou Baseball. The ‘64 team that came one win short of the championship was probably a bit better overall.

Except the '54 squad didn't fall one win short.

The '54 Tigers didn’t have any superstar players. From that team, only the coach, John "Hi" Simmons, and a relief pitcher/spot starter named Norm Stewart, made RMN's The Greatest series on their own. They're the only ones from that team whose names would be familiar to the average Tiger fan.

"Some ballclubs just seem to find out how to win," said [Norm] Stewart, a sophomore pitcher for the ’54 team. "And everything seems to go well for them in critical situations. … Coach Simmons, if he wasn’t the best coach during that time … then he was one of the top two or three coaches in the country. You take the coaching and those unique players, and everything else seemed to fall in place. It was a loose group, and nobody ever thought about losing a game."

The pitching staff had an impressive 2.27 ERA, but among Hi Simmons' six College World Series teams from '52 through '64, the '54 squad's ERA was only the third best, certainly not in the same league as 1964's 0.65 ERA. The best pitcher on the team turned out to be RHP Emil Kammer, a third baseman who hadn't even pitched in high school. LHP Ed Cook, from , developed into a dominant pitcher as the season progressed, and would go on to post a 1.77 career ERA in his three seasons, still ranked as 3rd best all time for MU.

Offensively, the team compiled a healthy .304 average, 20th all time for a Mizzou lineup. The team was lead offensively by CF Jerry Schoonmaker (.813 slugging % still ranks 4th all time), his brother 1B Bob Schoonmaker (’s last ever three-way player - football/basketball/baseball) and RF Bob Musgrave (.526 OB%, 5th all time). Both Jerry Schoonmaker and Musgrave hit over .400 for the season.

After the championship was won, Jerry Schoonmaker was signed by the Washington Senators, and played just 50 games over two seasons. His brother Bob chose to get married (on national TV) and leave Mizzou rather than pursue baseball. 3B Todd Sickel, Bob Musgrave, and Norm Stewart were all eventually signed by Major League teams, but none of them made it out of the minor leagues. SS Dick Dickinson and 2B Buddy Cox were offered pro contracts and turned them down. That fact alone illustrates how different the world of sports was back then. 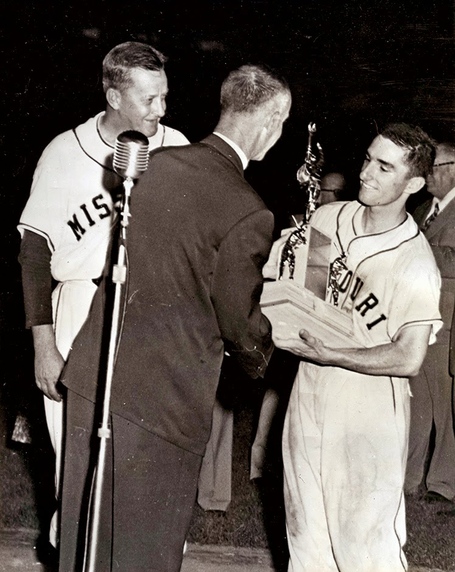 The 1954 College World Series Champion baseball Tigers were a talented group of athletes. They played above expectations and put together a string of great performances, and they kept doing it through to the final out at .

And in that regard, they exemplify what has always been the nature of the best Mizzou teams in every sport: Good players, well coached, playing as a team, achieving the improbable.

But for this team, unlike so many others, there was no soul-crushing failure at the end.

From the Columbia Daily Tribune:

The final game had been delayed a day because of rain. By Wednesday night the Tigers had pressing travel plans, one in particular. Bob Schoonmaker had to fly to New York to be married on a prime-time TV show.

``They were popular at that time,'' Callahan said. ``He couldn't even stay around. As the ceremony started, you could hear the sound of the sirens of the police cars that had come to escort him.''

Eight other players made bus connections to destinations such as North Platte, Neb., Yankton, S.D., and Wilmot, Minn., where they would play semipro ball that summer.

Others got off in Kansas City, leaving only seven players aboard when the bus arrived to a welcome home parade. The spring semester had ended before the Tigers left for Omaha.

``There wasn't a lot of students,'' Dickinson said. ``The whole town turned out. Whoever was there, they turned out.''

Finally they got off the bus to take a victory lap around town.

``They had convertibles line up, black and gold and all that stuff,'' Musgrave said.

Even then, Columbia was one of the biggest little media markets around. Cox, making his way back to Sikeston, became a TV interview subject.

``They just got me because I was the only one they could find, I'm sure,'' he said.

Like most of the team, Gleason, who'd gone only as far as Kansas City, couldn't see it or hear it.

``Much to my chagrin. I'll never forgive myself for that,'' he said. ``That we should have organized a lot better because that would be something that sticks out in your memory.''
(Columbia Daily Tribune, May 14, 1994)