Football season is finally here. What does Mizzou need from its key players for the Tigers to have a shot at the East again?

In 2013, many Mizzou fans were feeling like they would have to wait a number of years before they could realistically discuss their chances to win the SEC East. But then 2013 actually happened. Mizzou lost one regular season matchup against the Sakerlina Spurriers and their Tiger kryptonite, Conner F***ing Shaw. That loss didn't end up mattering, considering Mizzou still could have made the National Championship if they had beaten Auburn in the SEC Championship, but then Auburn ran for like a million yards or something.

Regardless, after finishing #5 in the final polls in 2013-14, Mizzou looks to have another solid season in 2014-15. But what do they need to do to have more than just a "solid" season and compete for the East again?

1. Maty Mauk's completion percentage needs to be over 60%. 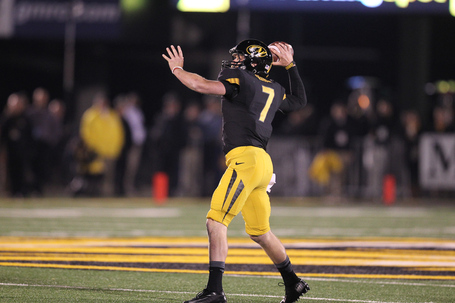 Now, 60% doesn't sound great to a lot of people, but with his explosive playmaking ability 60% is a very good number to be at. It means he has developed as a more efficient passer (considering his completion percentage last season was only 51%) and that he is doing a better job of keeping drives alive. Mauk has shown that he can throw the long ball better than most QBs at this level, but we need to see a better ball on the shorter routes. The ability to get

2. The Mizzou running game needs to average at least 150 yards a game.

Between Mauk, Hansbrough, Murphy, and Steward, there are endless opportunities for Mizzou to rack up yards on the ground. Behind an offensive line that should be far above average, there's no reason to think 150 yards a game isn't realistic. That said, if Mizzou isn't capable of posting up those kinds of numbers in the rushing game on a regular basis, a lot more pressure is going to fall on a fairly inexperienced group of receivers and a QB that needs to improve his efficiency.

3. Markus Golden needs to solidify himself as a top 15 NFL draft pick.

Golden looks to have all the pieces in place to have a monster season. An extremely gifted pass rusher with speed that can rival many running backs, scouts will be drooling all over his game tape this season. That is of course unless Golden has some sort of setback. We've seen it happen before, a guy in a backup role dominates when he gets his chances, but when it comes time for him to take center stage something changes and he underwhelms. I don't expect this to happen to Golden, but if Mizzou wants to win the SEC East, it absolutely cannot happen.

This is a relatively inexperienced group of receivers that will absolutely need at least one guy to become a primary target for Mauk. Darius White, Jimmie Hunt, and Bud Sasser are the three names that pop out as potential candidates right off the bat. While Hunt and Sasser have more experience, White seems to have a lot of potential as a speedy receiver. Mauk needs a guy he can count on this season and hopefully someone steps up for him.

Markus Golden looks to be a guy that can reach that seven sack benchmark, but the Tigers need another guy to do it to keep the pressure off of Golden. Shane Ray could and should be that guy, but if he can't then Marcus Loud, Charles Harris, or one of the other younger guys will need to mature as pass rushers a little early. 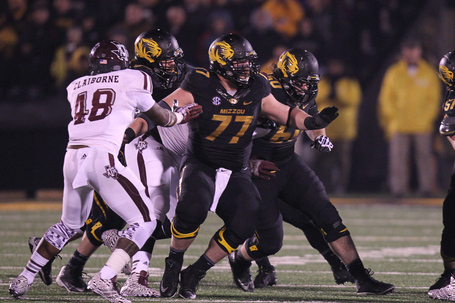 Ideally, the entire team will need to stay healthy for Mizzou to win the East, but this is even more true for the offensive line. A unit that is expected to be one of the best in the SEC will be the centerpiece for Mizzou's success on offense, and they need to keep the five guys that are there right now on the field all year. You win football games in the trenches and Mizzou looks to be strong on both sides of the ball, but this offensive line has a chance to be a special one and it is extremely important they stay intact for that to happen.

7. The Tigers need to win one out of three from South Carolina, Georgia, and Florida (along with the rest of the schedule).

So let's just win all of our games and call it good, right? Well that's a little easier said than done in the SEC, so let's take a little more of a realistic approach to this thing. I say this while vigorously knocking on wood (lol)... Mizzou should win all of its non-conference games as well as its games against Arkansas, Tennessee, Kentucky, and Vanderbilt. There are eight wins right there for those of you eyeing some mid-tier bowl games. Texas A&M will not be an easy out, but because we're talking about a division title here let's say Mizzou wins that game. With 9 wins against opponents not named South Carolina, Georgia, or Florida, Mizzou would need to beat at least one of those three to get to 10 wins and have a potential tiebreaker against another East contender. South Carolina looks like it will be the toughest of the three to beat, so with Georgia at home and Florida on the road Mizzou's East hopes lie in beating the Dawgs in Columbia or the Gators in Gainesville. It's not impossible for that to happen.

8. One Mizzou TE needs to establish himself as a real receiving threat.

The tight end position was kind of frustrating for some Mizzou fans last season. With the Chase Coffmans, Martin Ruckers, and Michael Egnews of the Mizzou football world, fans are used to seeing big numbers posted up from the TE position. Not so much last year. TEs were used mostly as blockers as they were actually attached to the OL much of the time last season. While I expect blocking duties to continue, Mizzou will need one of the tight ends to become a receiving threat in the short passing game. A good red zone target for Maty Mauk would take a lot of pressure off of the running game, all the while giving Mauk someone to look for in the play action passing game.

Murphy has solidified himself as a bonified playmaker. The guy just needs the ball in his hands and a little room to work with and he just makes plays happen. With his new appearance in the slot, Pinkel and Henson have decided they want him on the field more often than just being a backup RB and a PR. The options are endless with Murphy in the slot: bring him in motion for a read option, hit him on a tunnel screen, give him the ball on a short drag route... Just get him the ball. Five touches (not counting punt returns) is a good number for him in his current role, and I think that needs to happen regularly so Mizzou is giving one of their best offensive players a chance to shine.

10. Aarion Penton needs to establish himself as a potential All-SEC corner. 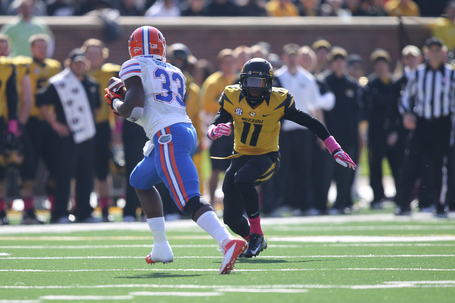 I'm high on his potential, but he needs to prove me and his other believers right if the Mizzou defense is playing at a division-winning level. He's very athletic, a strong tackler, and does a great job of keeping the play in front of him. If he continues to do that and evolves into an E.J. Gaines type of corner, a lot of the concerns about Mizzou's secondary will be put to rest.

All of these are very achievable individual benchmarks, but it's not easy to make ALL of them happen. I truly believe if Mizzou accomplishes all of these things, Tiger fans will be buying tickets for another trip to Atlanta. Here's to hoping. Much like the Ifs And Predictions threads of years past, share your predictions below:

1. How many games does Mizzou win this year?

2. Where does Mizzou finish in the East?

4. What game, if any, does Mizzou win this season that they shouldn't?

5. What game, if any, does Mizzou lose this season that they shouldn't?