We're finally in a place where we can finish the Greatest countdown. But first, as a lead-in, let's #evergreen the top 10 again. First up: the stadium's namesake.

Share All sharing options for: Mizzou's Greatest, #11-10: Don Faurot and a famous picture

Don Faurot was a three-sport athlete at Missouri from 1922-24. He became the Tigers' head coach and athletic director in 1935, he retired as coach in 1956, and he retired as athletic director in 1967. He stayed in and around his program for the nearly three decades that followed until his death, at age 93, in 1995. His involvement with Mizzou spanned nearly seven decades, at too many different levels to comprehend.

But if you are asked to close your eyes and picture Don Faurot, you're thinking of the same picture I'm thinking of. It is as engrained in Mizzou lore as any singular Faurot achievement. It comes from his final win, a last-second, 15-13 conquest of Kansas. It is perfect, both in the quality of the picture itself and what it represented: the father of Missouri football riding off into the sunset. It is truly worth a thousand words, minimum. 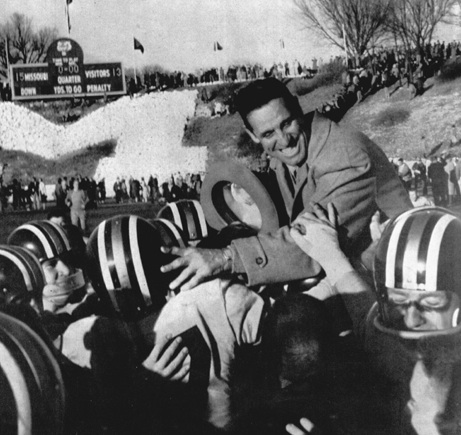 Of course, the career of the man himself requires a lot more than 1,000 words. A football, basketball, and baseball player (and Farm House member) at Mizzou, Faurot was a tenacious athlete and leader. Almost immediately after graduation, he was named head coach at what would eventually become Truman State in Kirksville. He won seven conference titles in nine years. His final loss at what was then Kirksville State Teachers College came on November 11, 1931, against Northwest Missouri; this is noteworthy because he coached there through 1934. His final three squads went 8-0, 9-0, and 8-0. They scored at least 20 points 11 times in that span and allowed more than seven points zero times. At one point, he was considered for the vacant Kansas State job, but when Frank Carideo's disastrous Mizzou tenure ended in 1934, Mizzou called Faurot, and Faurot came home.

Faurot's biggest strength ended up his biggest weakness: he was a giver. Tasked with figuring out how to move the ball without a natural passer after Paul Christman left, he gave his line wide splits and began tinkering with an advanced version of the option. His Split-T formation would go on to change the face of offensive football, but if he'd been able to keep it to himself, he may have won more games. Film study was far from prevalent in the 1940s, but when he went off to war, he coached the Iowa Pre-Flight team with assistants Jim Tatum and Bud Wilkinson. He shared his tricks with these charismatic young coaches, and they prospered. Tatum took over at Maryland in 1947 and proceeded to go 73-15-4 over 10 years, finishing in the top five three times and winning a 1953 national title. Wilkinson went to Oklahoma and, over the course of 17 seasons, won 145 games, finished in the top 10 13 times, and won three national titles. His Sooners didn't lose for nearly four years.

Faurot, fiercely loyal to the state of Missouri and its high school athletes, didn't expand his recruiting base as much as others were, and he paid the price to an extent. While others were thriving, he was grinding. After back-to-back Gator Bowl appearances in 1948-49, Mizzou won just six games in 1950-51 and 16 from 1952-55. His final win, against Kansas in 1956, was just his fourth of the season.

At Missouri, Faurot finished with a record of 101-79-10. The Tigers attended four bowls under his watch and won three conference titles. As athletic director, he secured Mizzou's athletic budget by agreeing to trip after trip to Columbus, playing Ohio State nine times in 11 years. He was a True Son, nearly to a fault. He literally wrote the book on one of college football's most influential offenses, and his name and statue welcome you to Memorial Stadium and Faurot Field each fall Saturday. He was as kind and influential as any Mizzou figure could ever be. Sticking him on this list at all doesn't feel right; it's almost as if we should have just named the list after him from the start. He and Mizzou are synonymous.