There's been a lot of movement in the last few weeks, so now would be a good time to go back and summarize what has been happening in the world of Mizzou basketball recruiting.

Share All sharing options for: Catching Up On Mizzou Basketball Recruiting, September 2014 Edition

With the amount of activity that's gone on in the recruiting world, BST and I figured now would be a good time to get a wrap of everything that's gone on with Mizzou Basketball Recruiting. We've got updates on all the 2015 recruits and even a couple tidbits on the 2016 class. First...

Juwan Morgan, who plays for MOKAN Elite, is down to Indiana and Vanderbilt, per a source. Will announce his college choice on Wednesday.

Who he is: Briscoe is a 5-star Point Guard who is ranked 9th in the country overall. Briscoe is a terrific heady player with a strong body who seems to make everyone around him better. He shoots well from the outside and has the explosiveness and quickness to get into the lane and finish with contact. In all, he's a complete player and the top Point Guard in the 2015 class.

How Mizzou is in the picture: Not quite sure. Briscoe is a top prize in the class, but there doesn't seem to be any locks for his services out there. The winds seem to think he was heading for Arizona until Alonzo Trier and Justin Simon committed, then he was staying close to home but close to home is Seton Hall and Rutgers, neither of which is likely to land a lot of 5-star guards. Now Mizzou will have an in home visit with Briscoe and try to get him on campus for a visit.

Is there a chance?: I just don't see it. At this point, Mizzou needs a big in the class and Briscoe isn't it. It would have been an incredible long shot anyway, but it's hard to see Mizzou spending time and energy flying out to New Jersey to test the waters on Briscoe when they've accepted the commitment from VanLeer. Why take up a scholarship on a 3-star 2-guard if you're looking for a 5-star combo guard? Briscoe announced a top 5 of Arizona, Villanova, Seton Hall, Rutgers and St. Johns a little while back. My guess is that Mizzou barely gets a foot in the door here. They were able to get in for an in home visit with Briscoe however.

Who he is: Kapita is a 4-star power forward who has seen his stock rise a lot over the summer circuit. He's got a powerful college ready body but is a little rough around the edges. The book on Kapita is that when he wants to he can dominate on both ends of the floor but that motivation is a strong problem that holds him back. He's still a good player who should shine in the right situation. He was recruited to Huntington Prep by some guy who nobody knows at this point.

How Mizzou is in the picture: Yep. That Fulford guy. Mizzou obviously needs a big in the class and can't put all their eggs in on Thomas Bryant who could go to Syracuse as easily as go to Missouri.

Is there a chance?: There IS a chance! Kapita doesn't have a slew of offers at this point and is looking like a spring signing. Florida and Texas appear to be the leaders with South Florida in the picture as well. Kapita is originally from Florida so it's possible that he ends up there. But having Fulford successfully recruit him once can't hurt.

Who he is: Williamson a 3-star Small Foward/Combo Guard is an intriguing prospect due to the fact that he can play anywhere from point guard to small forward. At 6-foot-6, he has great size and sees the floor exceptionally well. His ball handling ability is also impressive and he found a number of ways to put points on the board and keep his teammates involved throughout the weekend.

How Mizzou is in the picture: Like Briscoe, not sure how Mizzou got into the picture on Williamson. Whenever Mizzou in there though, you have to assume it had something to do with Tim Fuller. It was a bit of a surprise that he set up an official visit to Mizzou (scheduled for Sept. 19th). However, having missed out on their other 2 targets at small-foward/combo guard they are starting to maybe get a tad desperate.

Is there a chance?: Williamson listed Mizzou in his top 5 recently. He has an official visit scheduled for the 19th, his 2nd to last. Good thing is thats after he visits Buzz Williams at V-Tech, bad thing is he is still going to Clemson and Texsa Tech after Columbia. This one is going to be interesting to watch as he is appearing to heat up on other teams watch boards towards the end of the summer/AAU season.

Who he is: Guy is a 4-star Shooting Guard from Indiana. The kid is a lights out shooter who saw his stock skyrocket over the summer period. He was out of the top 100 to start and finished ranked #60 in the class. It's obvious with the commitment from Cullen VanLeer that Kim Anderson wants some guys who can stretch the floor with their jump shot and this kid can do just that. He's more than just a shooter though, he has very good ball skills and has more athleticism than you might think.

How Mizzou is in the picture: Mizzou watched Guy a lot this summer, mainly it seemed to be Fulford and Anderson doing most of the watching, but the entire staff was on hand this morning to offer Guy.

Missouri brought its entire staff to watch 2016 Indianapolis Lawrence Central guard this morning and offered him.

Is there a chance?: Probably not a huge one. But about as much as anyone in the 2016 class. I always feel like its really tough to get a great shooter from Indiana to leave the state and Guy will likely be no different. Plus he holds offers from Viriginia, Cal, Xavier, Indiana, Purdue, Northwestern, Iowa, Iowa St and Butler.

Who he is: Barnes is a 3-star rated guard from St. Louis. He led CBC to the state championship (with some help from Jordan Barnett who is at Texas now) as a sophomore. Barnes is a pass first point guard who can score when he needs to. I'm sure his scoring will increase this season with the graduation of some more seasoned players at CBC.

How Mizzou is in the picture: A St. Louis kid mostly. He's being recruited by Tim Fuller and Mizzou wants to get a PG in the 2016 class. He's probably a bit lower on the list of priorities when compared to guys like Kobi Simmons or Jamal Murray.

Is there a chance?: Certainly. After the commitment of Kevin Puryear and Cullen VanLeer it's clear that Mizzou will go after a solid Missouri kid as a backup to better players if they lose out. Barnes is an interesting case study because he could really grow into being a great player. As of right now his best offer is Missouri State. SLU, Creighton and Xavier are also interested, and with some added strength I could see him becoming a solid Power 5 Point Guard. 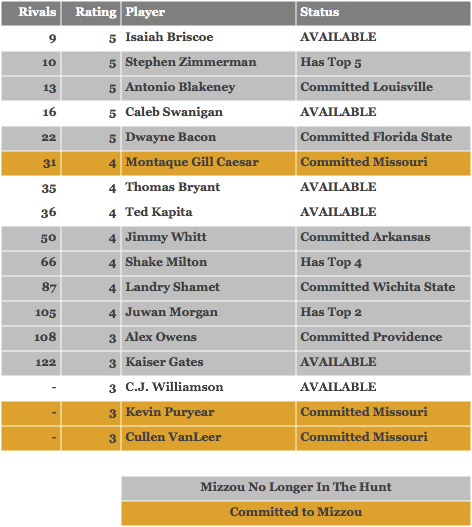 Honestly, I'm a little baffled by the moves of the coaching staff with the last two commits. I like both players as good 4 year type guys, but they certainly aren't program changers and Missouri was on, and still is, some much bigger names. It feels like they rushed on VanLeer, since they were by far his biggest offer they could have pulled that string at any time. So why not see how his senior year went and looking for a spring commit while still trying to make your inroads with other players for a fall commit?

It's also curious to still have CJ Williamson in for a visit since there is only one scholarship to give and they really need a big with the last scholarship. It would make sense that the commitments of VanLeer and Puryear knocks them off of several other perimeter players like Williamson and Kaiser Gates, who in case you didn't notice by the chart above I think Mizzou has all but completely cooled on. I haven't been able to unearth any info on Gates and whether or not Mizzou is still in the picture, but I doubt it at this point. The most likely target left is Thomas Bryant, who we know has an existing relationship with Rob Fulford and is rated as a 4-5 star PF/C on just about every website. Fulford was in Huntington with Kim Anderson to show that Bryant is likely THE Top priority of the program.

What we have is one scholarship left and there are very different players being recruited for that last spot. Isaiah Briscoe is certainly exciting to think about but it doesn't make a ton of sense from a roster standpoint with VanLeer as a commit. The other possibility is that a scholarship may open up at the end of this season through either a transfer, early draft entry or other means. I'm not a proponent of the "pulling" of a scholarship but it's been known to happen, and turnover is typically high when a new coach takes over so it's possible that several guys don't see much of a future at the end of the year and move on. My problem is that it's difficult seeing a lot of turnover with the players that are on the team now, and I don't like to speculate on who might leave. But if you wanna know who might, look at the end of the bench this coming season.