USA Basketball won a tournament, nobody paid attention. Then Adrian Wojnarowski up and said something that got everybody talking about it.

In case you missed it (and based upon the ratings, I was one of three people who tuned in to watch at least part of the game), USA Basketball embarrassed Serbia to win the FIBA World Cup. USA, led by Kyrie Irving, won by 37 points. Also, ICYMI, the United States is good at basketball. Since losing the Gold Medal in 1988, the USA inserted our professional players and we've succinctly beaten the snot out of the competition since. There was one hiccup in 2006 when the USA sleepwalked through the tournament and lost to Greece in the semi-finals. But just like the last time, everybody associated with basketball in the states got made and the next time sent even better players over and the USA team reasserted their dominance in the 2008 Olympics.

Now that you're caught up on the recent history of USA Basketball, the man running the show since 2005 has been Mike Krzyzewski. And Woj took the time to write a bit of a take down of Coach K being in charge of USA Basketball and how it impacts several aspects of basketball in the United States. 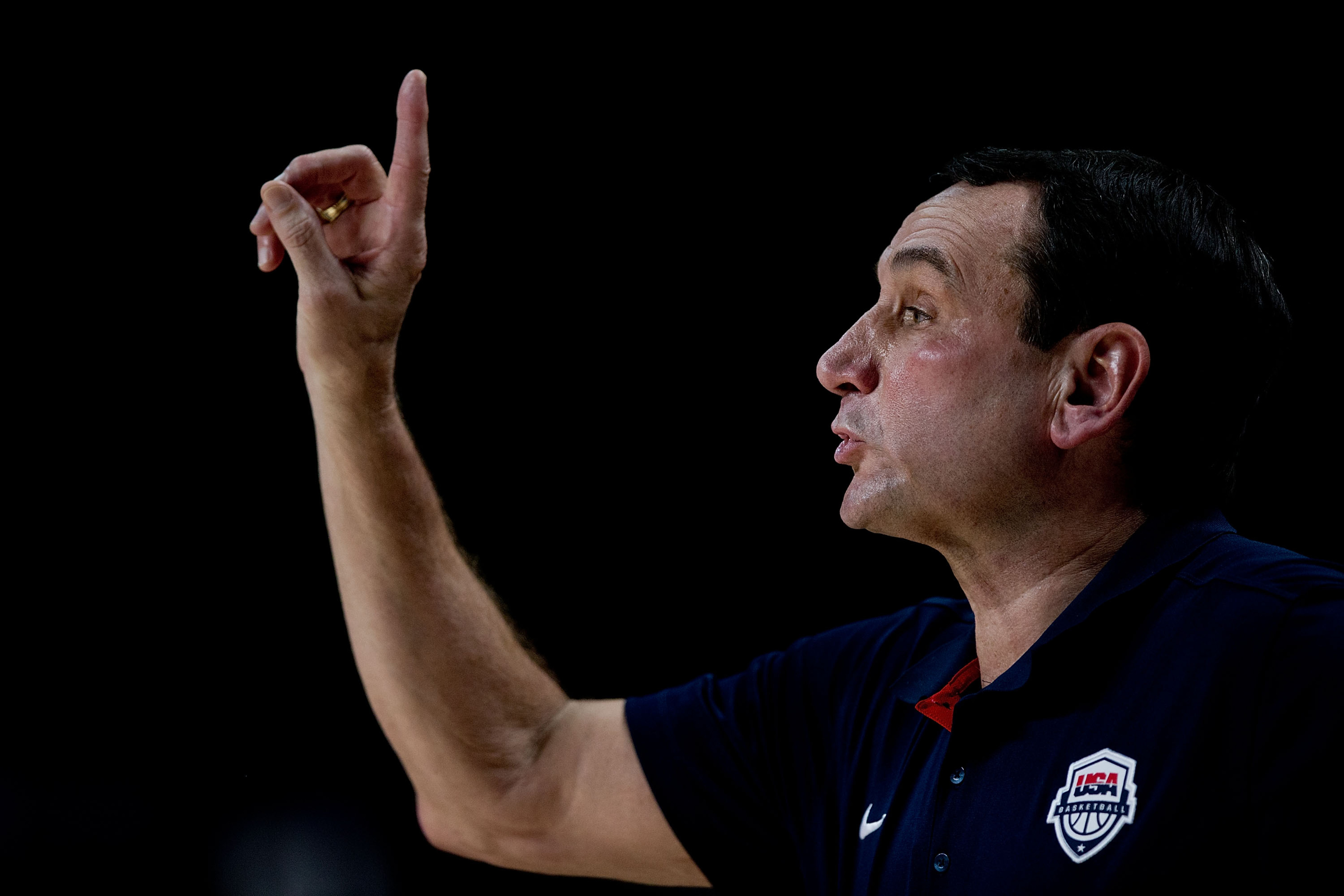 The overarching point of the piece is that it's time for FIBA and/or USA Basketball to get the heavy hitter professionals out of the game. He cited Paul George's freak injury as a reason, despite the fact that you can get injured in any way at any time. I can't say I agree with the point because the highest professionals are involved in every sport so I'm not sure why basketball should be any different. It's not like the stars of the Euro-league stay home for the FIFA World Cup. If an NBA team wants to write a clause into a players contract restricting him from playing in FIBA sponsored games, the Olympics or for USA Basketball, that's on them. I don't pretend to ignore the obvious financial impact of losing a franchise player to an injury when he's not playing for the team he's being paid millions by.

To those who don't follow recruiting as closely as I do, Coach K being in charge is kind of a big deal because as Woj writes:

Krzyzewski never violated an NCAA rule when he climbed aboard a flight, flew cross-country and addressed the 2013 under-19 USA Basketball national team at its Colorado Springs training camp. He addressed players in a group, and talked to them individually, sources told Yahoo Sports. For the record, Krzyzewski is USA Basketball's senior national coach and the visit gave him an opportunity to personally welcome those young men into the program's feeder system.

Well, the trip did something else, too: It gave the Duke coach unfiltered access to two of the best high school players in the nation. Florida's Billy Donovan was the under-19 head coach. Virginia's Tony Bennett and VCU's Shaka Smart were his assistants. They probably didn't need Krzyzewski's voice, but he probably didn't ask their permission, either.

The roster of college stars happened to include two 17-year-old prep phenoms: Chicago's Jahlil Okafor and Houston's Justise Winslow. When Krzyzewski makes his triumphant return this week, two freshmen stars will be awaiting him on Duke's campus: Okafor and Winslow.

So this hit close to home when I read it as I know this has been a serious point of contention amongst many college coaches.

It may not appear that many college basketball fans need to worry much about this as it's not like Duke was pulling in terrible players before he took over Team USA. However there are some areas of concern and eve for Mizzou fans because Jayson Tatum played for USA Basketball this summer. Isaiah Briscoe (a new Mizzou target) also played for USA Basketball, and assistant coach Sean Miller of Arizona. Weirdly in Briscoe's original top 5 (despite every other top 5 school being in the Northeast). Billy Donovan is the head coach of the younger team. So it does impact recruiting in all circles of high level college basketball and specifically Missouri recruiting. This setup gives the coaches involved an unfair advantage. If you follow the link to the USA Basketball rosters you may also notice that Thomas Bryant played in 2013, and Caleb Swanigan played in 2014. More Mizzou targets.

I should also add, that my personal preference would be to not allow college coaches to recruit kids they coach in USA Basketball.

I respect Eric Bossi a lot, but this makes little sense to me. It seems to unfairly punish the coaches who do have to work pretty hard for USA Basketball, and would likely create some pretty random roster cuts on top of that. I can just see somebody like Jayson Tatum getting cut because the coach wants to be able to recruit him and made the mistake of signing up to coach USA Bsaketball.

So what is the answer? The obvious and easy one would be for USA Basketball to move away from college basketball coaches. It has, and will continue, to create a mess of a situation when college coaches are involved in coaching the kids they are recruiting.  Instead what USA Basketball needs to do is to look to the Nike ranks and just complete the symmetry between the two. USA Basketball needs to be able to hire a national coach who is not involved in college basketball. Nike can afford to help them pay for that coach to work full time for USA Basketball. Instead of picking up a supplementary (and still nice) paycheck from USA Basketball. I imagine there are a few retired coaches around the NBA and even former college coaches that could get involved and be a very effective ambassador for USA Basketball (and Nike). Snatching up a coach who still has a lot of good years left but isn't quite wanting to stick with the grind of an NBA season would be a great move. I'm thinking of guys like Don Nelson, George Karl, P.J. Carlesimo, Doug Collins or even Rick Adelman. Any of those guys could sit back and take a fairly relaxing job that requires a lot of work every few years. Meanwhile they could help continue to build the brand of USA Basketball and work the continue the dominance and pride that Coach K has instilled to this point.