With the dismissal of Dorial Green-Beckham and four other members, Missouri's 2012 recruiting class could have become a lost class. Instead, it is the reason Missouri is again a top-20 team in 2014.

Depending on the formation, Levi Copelin was supposed to become either Missouri's fourth starting receiver or top backup in 2014. Instead, he was suspended for the season, then was eventually dismissed from the program in September.

It was a rather run-of-the-mill outcome for what has become the strangest recruiting class of the Pinkel era. Three years after signing, almost everybody in the 2012 class has either become a starter or has been kicked off of the squad. And as seems to be customary for the Tigers, the successes and personal failures have basically spread evenly throughout the recruiting rankings.

The 2012 class was one of high pressure for Missouri. In November 2011, the university announced that it would be joining the Southeastern Conference, which began the immediate, silly "MIZZOU CAN'T RECRUIT AT THIS LEVEL" discussion. In part because of only decent results on the field in 2011 (and in part because the coaches more or less don't give a damn), the class didn't appear too deep at the top.

Thanks to the marquee signing of Dorial Green-Beckham and the re-commitment of Evan Boehm (an early commit who explored his options and visited Auburn, then re-committed to MU), Mizzou had a pair of headliners. Five-star Park Hill tackle Ondre Pipkins, however, signed with Michigan (his original home state), and four-star DeSmet wideout Durron Neal chose Oklahoma early in the recruiting process despite increasingly desperate "Is Neal still considering Mizzou?" rumors that seemed to start solely on Mizzou message boards.

Nabbing Morgan Steward, Donavin Newsom, and Michael Scherer gave the Tigers five of the top eight recruits in the state (Michael Rose, No. 5 according to Rivals, didn't receive a Mizzou offer and signed with Nebraska). But the in-state talent wasn't very deep that year, and there really weren't any out-of-state attention grabbers. Even with DGB and Boehm, Mizzou's class ranked 31st according to both Rivals and 247 Sports, hovering around 11th in the SEC.

Early impressions of this class were far from positive. Boehm was thrown into the starting lineup from Day 1, and DGB improved late in the season, finishing with 28 catches for 395 yards. A three-star JUCO transfer named Markus Golden had 8.0 tackles as a backup linebacker and special teams guy. But they were the only first-year contributors. Meanwhile, DGB, Levi Copelin, and Torey Boozer were arrested for smoking marijuana in a car in the shadow of Memorial Stadium. Brandon Holifield was soon kicked off the team. So was Ka'Ra Stewart. And Boozer. And Copelin. And, of course, DGB.

When you've got a small class and end up with a few bad apples -- and if your headliner only lasts two years on campus -- it could make for a wasted class. And a wasted class often brings depth issues down the line. But somehow that not only hasn't been the case for the 2012 class, but Mizzou went 11-3 and won its second straight SEC East title in 2014 almost because of that class.

Not only that, but in re-ranking the recruiting classes of 2012, Sports Illustrated's Andy Staples named Mizzou's haul the fifth-best in the country.

Members of this class played key roles in capturing back-to-back SEC East titles, and some will have an excellent chance at winning a third next season. Mauk improved as the 2014 season progressed and will enter ’15 as one of the SEC’s most seasoned passers. Golden teamed with Shane Ray to keep the Columbia Pass Rusher Factory humming. This class also included Rivals.com’s No. 1 overall recruit, but he didn’t finish his career at Mizzou. Wide receiver Dorial Green-Beckham was as good as advertised and helped the Tigers reach the SEC title game as a sophomore ’13, but was thrown off the team for a variety of infractions—including a domestic violence accusation—and spent ’14 essentially preparing for the NFL draft at Oklahoma.

Obviously DGB made a huge contribution to last season's 12-win team, but he was the only one. Players like Stewart and Holified were praised for their athleticism but never saw the field. Boozer was gone pretty quickly after those two, and Copelin was a bit player in 2013. Attrition like this can kill a team's depth, but only the receiver position was impacted. Meanwhile...

Despite having only 14 non-dismissed players, this class has produced nine starters, an entire starting offensive backfield, two key defensive linemen (including one likely first- or second-day draft pick), two starting linebackers, a starting cornerback, and five other players who, when healthy, fill in the depth chart. And for a top-20 team, no less. That's incredible.

Let's put this in perspective by looking at other recent classes in their respective third years on campus:

With all of the talent that left after the 2013 season, Missouri needed a small remaining 2012 class to come up huge to avoid drop-off. Against decent odds, it did. You're not supposed to lean this much on your third-year class, but Missouri did, and while there was still a drop-off from 2013, it wasn't nearly as significant as could have been expected.

And the best thing about a third-year class: it becomes a fourth-year class. Of the nine starters the class has produced, eight will return in 2015 (everybody but Golden), and five to six will likely return in 2016 (sans Hansbrough, Boehm, and maybe Brantley).

Missouri's recent recruiting classes are stocked with high-ceiling athletes, and the most recent signing haul was one of the most highly rated of the Pinkel era. But thanks to the tiny, unlikely 2012 class, Mizzou will be able to ease in the younger players instead of tossing them into the deep end. 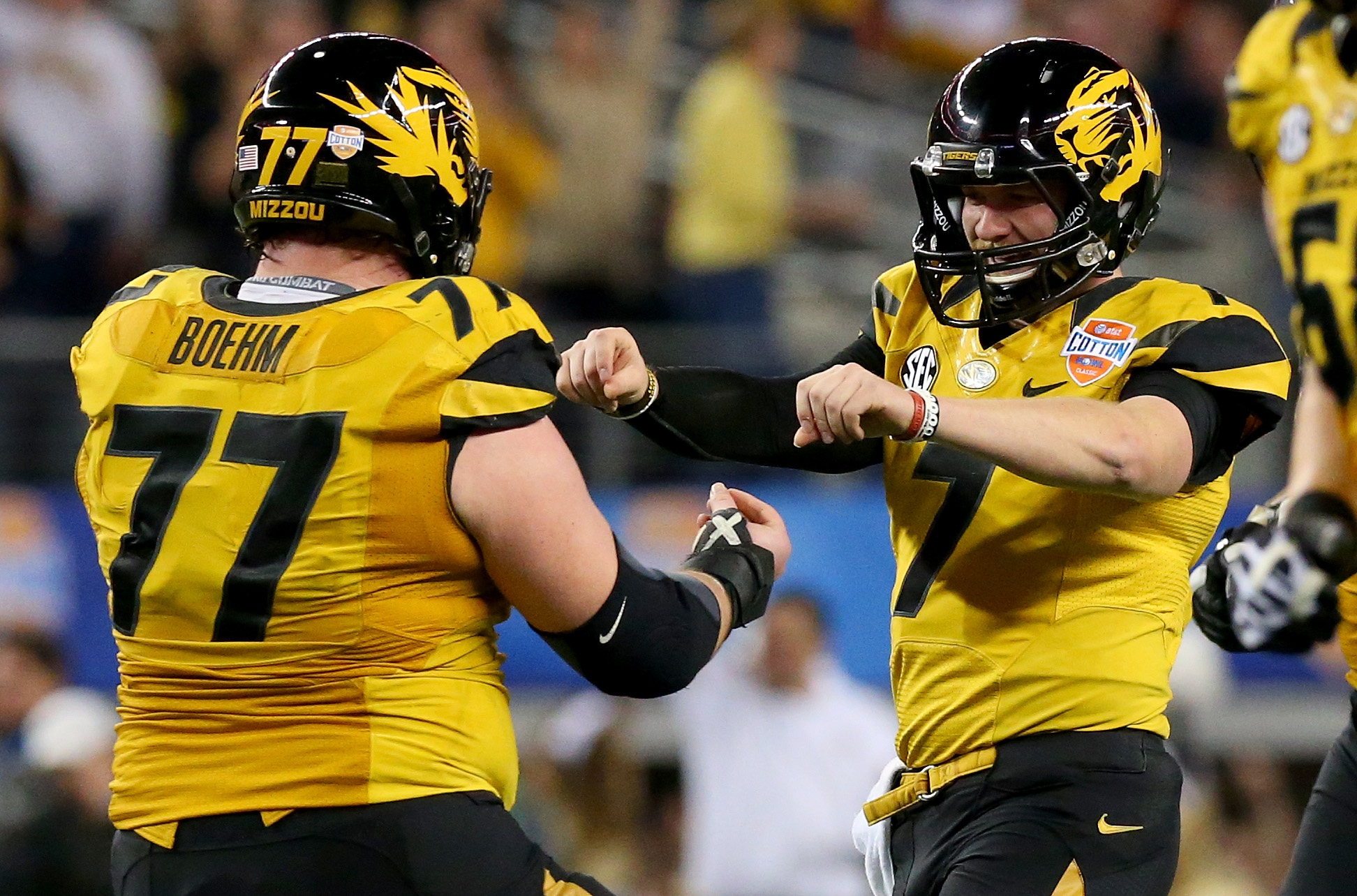 Note: this original version of this post appeared in September 2014.