[leans in and whispers] Psssssst, it's Thursday. Time to start pregamin' the B1G game.

WHO: Missouri Tigers vs. Indiana Hoosiers

WHAT: Tossin' the ol' pigskin

WHERE: Faurot Field at Memorial Stadium 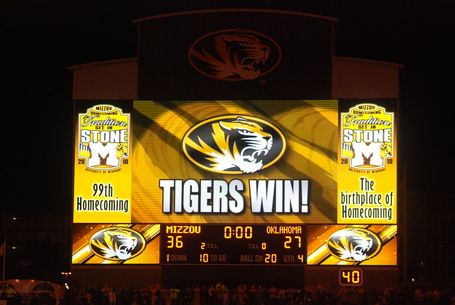 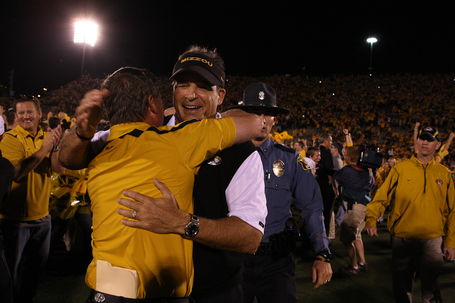 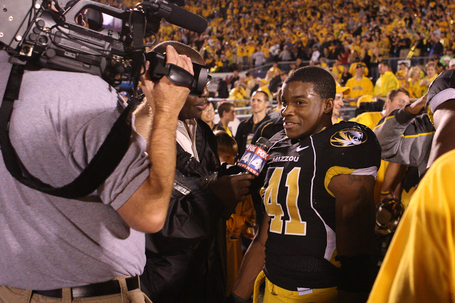 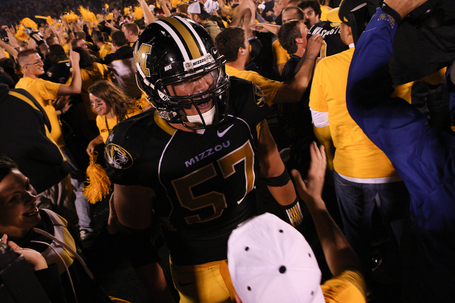 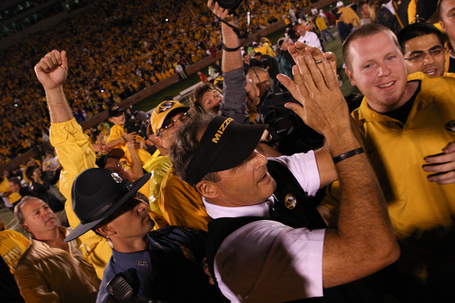 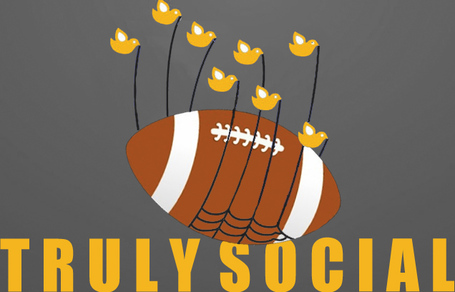 Gary Pinkel comes in in a suit: "I'm just letting you know, I was at a funeral. I'm not dressing up for you guys."

Pinkel says Josh Augusta probably wants to play tight end now, but #Mizzou won't do that. "We probably should."

Shane Ray said if Josh Augusta wanted to play tight end "I'm pretty sure he'd be one of the best tight ends in the nation."

Mauk says Scherer has pink slippers with individual toes. Scherer: "That was supposed to stay in the house."

Scherer said Mauk wanted him to stop the car once so he could hunt a deer he saw out back of Mizzou Arena when they were driving.

Pinkel calls LeBron James the 3rd-best athlete to come out of Ohio: "Maty Mauk is No. 1. People tell me Gary Pinkel is No. 2."

Arena league San Jose Sabercats just called to sign me as a QB. Proudly hit em with "No thanks, I'm a Coach."

Pack the ZOU Saturday!! Lets sell out and be loud! #BeatIU 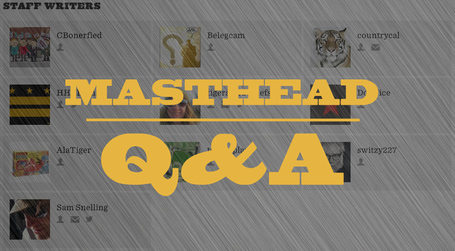 Who do you hope to see more from against Indiana?

Adam Cribbs: I hope to see more from Culkin this game. I think this will be a good time for us to work our TEs into the game-plan a little more and I think that will help us a lot down the road.

The Beef: I feel like it is starting to be a bit nit-picky on this stuff since we've been winning by pretty handy margins each time. I thought tackling improved last week and we did not give up the big play against a pretty decent team. That is going to be tougher to come by this week against an ever BETTER offensive team, so I suppose I hope to see Indiana kept in check from a big-play standpoint. This should be another decent test to see how we might do against a really good RB (not that the RB from Toledo wasn't good) leading up to conference play when we are slated to see a few.

Jack Peglow: Last week I called out Lucas Vincent, and he had his best game so far. This week, I'll be bestowing my magic upon John Gibson. It's not that he's played terribly at corner, he just hasn't been making any big plays. In a game where Indiana could end up passing the ball a lot, I'd love for him to make some highlights.

AlaTiger: I'd like to see Braylon Webb make that interception on third and long instead of barely missing it. If one of the corners would like to intercept a pass as well, that would be extra special.

What group (D-line, O-line, coaches, etc.) do you hope to see better play from?

Snelling: Definitely the interior O-line. After a pretty poor showing last week against UCF, I expect them to have a big rebound game and dominate the LOS against IU.

Cribbs: Well, I keep saying this... but the secondary. They showed a lot of improvement last week, though I think they benefitted quite a bit from our DL's absolutely dominant second half. Indiana is able to score some points, so this week would be a good one to get things on track.

Peglow: I said it last week and I'll say it again: the linebackers not named Michael Scherer need to make some more plays. I've waxed poetic about Scherer's prolific tackling, but it would be super neat if his linebacker pals could pick up some of the slack, especially against a ball-carrier as talented as Tevin Coleman.

Fullback: Safeties in run and coverage.

HHKB: The back four in coverage, less getting beat on third and long, more tackling and an INT earlier just to get that out of the way early.

AlaTiger: I'd like to see better gap integrity from the linebackers.

What is one wild prediction for this week's game?

Beef: Sean Culkin gets in the endzone.

HHKB: Shane Ray and Markus Golden combine on a sack where IU's quarterback's helmet goes popping off like a champagne cork. Somewhere, JST resists the urge to run on the field and snag it for himself.

AlaTiger: Nate Sudfeld is so intimidated by an onrushing Mizzou defensive lineman that he hands him the ball.

What is the Indiana mascot?

Snelling: What is the St. Louis colloquialism for a Redneck, Alex?

Cribbs: The Hoosiers, and this guy will never let you forget it. 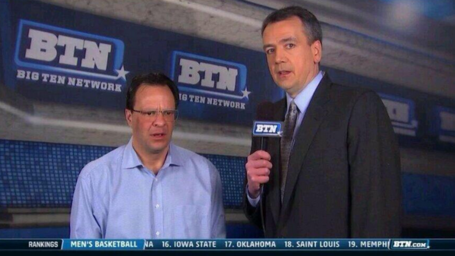 AlaTiger: A fenton resident. The Beef's answer is also acceptable.

Can you name one current or former Indiana football player?

Snelling: Nate Sudfeld is the current QB still, yes? Former I'd have to go with Antwaan Randle-El.

Fullback: Cody Latimer is a WR from last year who now plays for the Broncos.

HHKB: Does Lee Corso count? If not, Antwaan Randle-El who the Washington Football team bid against themselves to give him a crazy deal and a TB that he didn't ask for. Dan Snyder is not only awful, but stupid!

Switzy227: Watch for: Some creative playcalling if Mizzou is forced to keep up with Indiana's offense, a banner day for one or more Mizzou receivers, and a continued tackle-fest for Michael Scherer and company.

Worry about: Indiana seriously challenging the Mizzou secondary, turnovers negating Mizzou's strong advantage on defense, and the run game remaining merely steady - a sign that it might be tough sledding in conference play.

Hope for: disciplined play from Mizzou's front 7 disrupting all phases of Indiana's offense, continued success for Mizzou's special teams, and a coming-out party for Sean Culkin.

Snelling: After a dominant second half performance from the Tigers, I'm feeling a lot more hopeful that this team can build itself up in a similar way to last years team. I'm thinking that we should see both an efficient at times, and big play offense on Saturday, but what I'm most interested in is if the D can make some big plays and keep Indiana off the field. Mizzou will need to harass Sudfeld with the front four in order to force him into mistakes. If they can do that I see a relatively easy win.

I'm worried that the defense won't be able to make enough plays in the back seven and the Hoosiers offense will be able to keep pace with our own and make this a tight game.

I'm certainly hopeful that Shane Ray and Marcus Golden can get to Sudfeld enough, and the D-tackles can limit the run enough to get the guys on offense enough of a padding that Mizzou wins this game going away. I'm also hopeful that we'll see the return of the Darius "Money Season" White to the end zone.

AlaTiger: I am a bit worried about the defense giving up long runs to a top-notch back. Last week's solid effort against UCF gives me hope that those troubles are behind us now. I'm thinking last week's 3rd down woes were an aberration and the defense will be able to get off the field. I don't know if it is Indiana's DNA to be as methodical as UCF was. More Mizzou possessions yields more Mizzou scores.

If Mizzou opens up a lead early and forces the Hoosiers to be pass heavy, this game won't be close. Let's hope that happens. 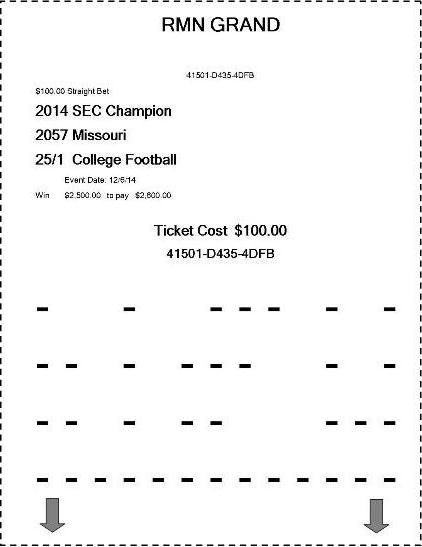 Three weeks in, here are your current standings:

STILL IN THE LEAD, THE REIGNING CHAMP: Jack "I'm going to drop all the games this week" Peglow, with 14 correct picks.

Second place by a smidgen: ArmyOfMike, with 13 correct picks.

Third place, also by a smidgen: The Beef, with 12 correct picks.

And heeeeerrrrrrrrreeeeeeeee are our #EXPERT picks: 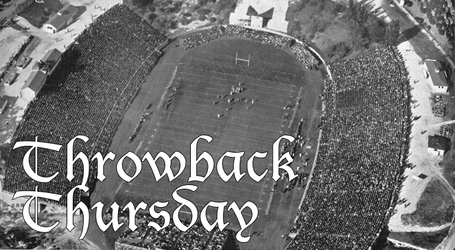 This #TBT has levels to it. Yes, it's a throwback to the 2010 Homecoming victory over Oklahoma (for reasons listed above), but it's ALSO a #TBT to ZouDave! Enjoy.