This is the first day without football since we kicked off the season last week. What gives? 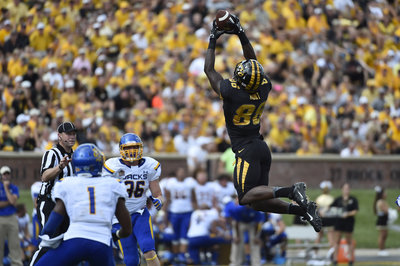 "Good afternoon everybody. I appreciate you being here. First an injury report. We came out of the game (Aug. 30 vs. South Dakota State) in fairly good condition, minus a few bumps and bruises. The depth chart really hasn't changed. Morgan Steward is still out for this game (at Toledo). We're not sure when he'll return. Hopefully in a few weeks, but it will be a week-by-week evaluation. The University of Toledo and head coach Matt Campbell have done a good job there. They have an outstanding team and are very well coached. They are a disciplined team and I'm very impressed with them. They have a lot of players back from a year ago, and Mizzou fans know how good they were a year ago. They're back this year with 16 or 17 starters. It will be a great challenge for us, and it's a great environment to play at (The Glass Bowl). We have to prepare hard and give it our best effort."

On returning to Toledo as the Mizzou head coach...

"All three of my kids graduated from high school in Toledo, Ohio. I was there 10 years and have a lot of friends there. They have great people and a great community. It's a big part of my life and career. I'll always be a Toledo Rocket, but obviously not this weekend. Once game times comes, trust me, you focus and you go. I'll be able to do that."

"He played really really well. He threw for over 300 yards, and I was very impressed. We saw the film of him today. He has a lot of poise. He knows what he's doing. He doesn't sit in the pocket too long and he gets rid of the ball. He's got a very experienced offensive line in front of him, and a lot of other players around him that can play. It was very impressive to see him play the way he played. They got a good one there."

On the difficulty of preparing for an opposing transfer quarterback like Ely...

"It doesn't matter. You can complain that you don't have more film on a player, but you have what you have. What we do is study him, and see what they do on offense with this guy as compared to past years. You kind of get a general philosophy there. Everybody does some things a little differently, but we know he's very talented and has very good accuracy. He's a very good player."

On Maty Mauk returning to his home state where he played high school football...

"I'd like to think that he (Mauk) would just go and play football. That's really ultimately what you have to do. Like when he played against Florida or South Carolina last year, you got to just play football. Obviously, he'll have a lot of people there from his hometown (Kenton, Ohio), but I think he'll be fine. I'll be disappointed if he's not focused and ready to go Saturday. He will be."

"He threw 62-percent completion. Threw long balls, completions and big plays. He did a lot of good things. I think what we all have to remember, myself included, is that this was only his fifth career game started. He didn't come off a full year of playing football. The timing of our passing game still isn't that consistent as it needs to be, but we're working on it to make it better. Overall, I think he did a really good job."

#Mizzou/Toledo notes: http://t.co/6jJ31SyxS1. These 2 tied for most combined kicks returned for TD in school history. pic.twitter.com/NsSLrS8Lbs

So you've probably figured out by now that I'm kind of obsessed with how Missouri is going to use its tight ends this year. But I think I have good reason. Josh Henson did some pretty new stuff Saturday, at least compared to what he did last year.

First off, Culkin lined up wide 26 times in one game. He and Eric Waters combined to line up wide 27 times all of last year, in 14 games.

Culkin saw 53.1 percent of his snaps out wide Saturday. Contrast that with last year, when only 6.1 percent of the tight ends' snaps came with them lined up unattached to the line.

Cheadle said his cousin, actor Don Cheadle, was texting with his father throughout the game: "He showed me a text after the game that said, 'When are they going to put him in?!' Because we had a reasonable lead. I know he was watching." (Cheadle played the final three snaps of the game, on South Dakota State's last series.)

"When I got here (to Mizzou), we had one scholarship cornerback, and he was getting surgery the next morning." - Coach Pinkel. 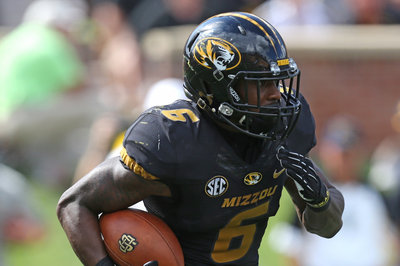 Rickey Hatley is now listed at No. 2 end instead of No. 3 DT.

LAST TIME VS. THE ROCKETS

Mizzou and Toledo will be meeting for just the second time ever, with last year's 38-23 Tiger win in Columbia serving as the fi rst contest between the two schools. The game was tight throughout, as Mizzou held a slim 24-23 lead late in the third quarter. But the Tigers buckled down and put together a crucial 75-yard touchdown drive to end the third quarter for a 31-23 lead and a little breathing room, then they capitalized on a Toledo special teams miscue to account for the final score. A Toledo punt went just nine yards after it hit off a personal protector's back, and the Tigers took over at the UT 44-yardline. Ten plays later, Mizzou TB Marcus Murphy ran for an 8-yard touchdown, and Mizzou had a 38-23 lead with 10:29 left in the game. Toledo outgained Mizzou in total offense by a 387-384 margin, but Mizzou won the turnover margin 3-to-1, with all turnovers being interceptions. The Tigers had a key takeaway right before halftime, as safety Matt White intercepted a tipped ball in the MU endzone to stop a Rocket scoring opportunity

In case you think Depth Charts are cool, bannedwagoner made some really cool infographics for you

9. Missouri Or you can just beat up on an FCS team.

I could talk about the game, but you would probably want to hear about it from someone who actually had the opportunity to be there, so I pass it off to Kevin Able (MIZ...TCU) for his own thoughts on the game.