The Tigers travel to one of the most hostile environments they'll play in all year, where they'll attempt to pull off an upset under the bright lights of the College Gameday spotlight. If they want to emerge victorious from the battle of two Columbias, they'll need to focus on this scientifically proven key to winning the game.

As you may or may not be aware, the Missouri Tigers dropped their final non-conference game of the season, falling to the Indiana Hoosiers 31-27. While this may not have been the most likely outcome, it was certainly a possibility. The contributing factors to this result made this one of the most unlikely routes the Tigers could have taken to a loss, which threw off our hypothesis from last week just a bit. Let's take a look at the smoldering remains.

If Mizzou's defense limits Tevin Coleman to less than three runs of 20 yards or more, the Tigers will put the game out of reach before the beginning of the fourth quarter.

Coleman was injured for a portion of the game, yet he was still able to set up two huge Indiana touchdowns thanks to big gains. He tallied a 49-yard run late in the third quarter, and took a screen pass 44 yards to finish the Tigers off in the fourth quarter. Yes, Mizzou did hold Coleman under three long plays like we asked, and in doing so, they held Indiana to 31 points. This SHOULD HAVE been enough to snag a closer-than-the-fans-would-like victory. What we at the Rock M Laboratories didn't count on, was Indiana's defense being keeping Mizzou under 30 points.

If you told me that the Hoosiers would score less than 35 points, I would've been quite confident in predicting a Missouri win. Unfortunately, that wasn't the case. Thanks to an injury to Anthony Gatti, the synergy on the offensive line was scrapped and some players were shifted around. This led to communication breakdowns, which led to missed assignments, which led to a frazzled Maty Mauk and a broken running game, which led to an ineffective offense. Even though we got what we asked for – for the most part – on defense, it wasn't enough to stave off the Hoosiers. 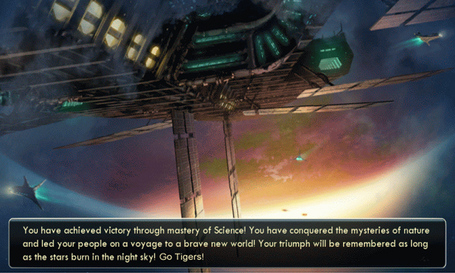 We scientists are just as eager to move on as the rest of you Tiger fans, so let's shift our gaze to the future. This week, Mizzou heads to the "other" Columbia, where College Gameday will be with the usual pomp and circumstance in tow. Waiting for them is Hatin' Ass Steve Spurrier and his South Carolina Gamecocks, who would love nothing more than to add insult to injury and send Missouri home with a spanking. What do the Tigers need to accomplish if they want to redeem themselves in front of a huge, national audience? SCIENCE has the answer.

The Gamecocks entered the season with some pretty lofty expectations, and proceeded to lower them after they dropped their first game against Texas A&M and just survived East Carolina, and then they proceeded to raise them back up after handling Georgia at home, and then they proceeded to lower them a bit back down after a brief scare from Vanderbilt. Mizzou will be (sand)storming Williams-Brice Stadium hoping to keep the Cocks' trajectory pointed in the direction associated with their university. That's down. Mizzou wants to keep South Carolina on a downward trajectory. In order to discern how the Tigers can accomplish this, we've formulated this week's question:

Can a common denominator be found in the performances of the teams that had success against the Gamecocks?

Why Missouri Might Win: South Carolina’s defense only shows up once in a while and the secondary has been a disaster. Granted, just about everyone’s numbers would stink against Kenny Hill and Texas A&M, Shane Carden and East Carolina, Hutson Mason and Georgia, but allowing Vanderbilt’s struggling quarterbacks to hit 60% of their passes for 223 yards and a score is a big problem. You and a few friends could complete 70% against a soft Gamecock secondary that’s getting absolutely no help whatsoever from the pass rush that’s generated just four sacks so far. Mizzou’s O line has been strong giving up just five sacks.

So he thinks South Carolina's secondary is vulnerable, huh? That seems to be a prevailing thought around the college football landscape, but just how accurate is it? Here at the Rock M Laboratories, we don't believe in math – it's stupid, it lies to you, and it stems from 18th century magic – but we aren't opposed to using basic numbers to check something's validity. Let's do just that in examining South Carolina's defense against the pass.

Man, that's a lot of numbers, and they aren't very flattering for the Gamecock defense. Yes, they've faced some talented quarterbacks, but that's still a lot of yardage to be giving up. It's also quite the common denominator, if I do say so myself.

Even with the occasional erratic behavior, Maty Mauk is having one of the most productive passing seasons in the nation. His 14 touchdown throws are second only to Connor Halliday of Washington State, and he certainly doesn't lack the confidence needed to chuck it on a big stage. If Mizzou wants to pull of a huge road upset, it will require a similarly huge game from Mauk.

Missouri's running game is solid, and it should be able to break off a few runs against the Gamecocks, but the Tigers need to utilize their potent passing attack if they want to beat South Carolina for the first time as a member of the SEC. This does not mean that Mauk can just heave the ball around all willy-nilly, though. He has to be efficiently explosive, which is why we've chosen to focus on a few factors instead of only one. Total yards aren't an incredibly effective means of judging a teams success, so we'll look past those and hone in on the things that do – at least a little bit – indicate a winning performance: completion percentage and passer rating. If Mauk can get both of those stats looking nice and pretty, it means that Mizzou probably performed well offensively. The defense should be able to hold its own, especially with Markus Golden back in the mix, so the responsibility falls to Maty to snag the win. This line of thinking is was led us to THIS WEEK'S HYPOTHESIS:

If Maty Mauk completes upwards of 65% of his passes and posts a passer rating over 155, Missouri will have had enough success offensively to eek out a hard-fought victory over the Gamecocks.

As we learned last weekend, other variables can effect the accuracy of these predictions. However, we'll continue to highlight what we believe to be the single biggest factor in producing a W for the Tigers. For now though, all we can do is wait.