Mizzou Announced that Cameron Biedscheid has left the Missouri basketball program opening up a scholarship for 2015.

The collective freak out throughout Mizzou nation after Cullen VanLeer committed had to do with open scholarships and so many big names that are still out there. I, and many others like me, kept saying... Don't worry about it, it will work out. There are a number of scenarios that could involve players leaving the program for whatever reason. If a 5-star player wants to commit, the coaches know they'll have a spot for him. The coaches know their roster better than we do. And with a new coach there is always a high chance of turnover.

That turnover became real, again as Tod Palmer was the first to report, Cameron Biedscheid has left the Tigers program.

"Cameron will no longer be a member of our basketball program as he attends to personal matters," Missouri coach Kim Anderson said in a statement from MU Athletics. "We wish him and his family all the best and hope everyone will respect their privacy during this period of time."

Biedscheid, a 6-foot-7 small forward from Cardinal Ritter in St. Louis, averaged 31.7 points and 9.6 rebounds as a high school senior.

It will always suck to lose a highly rated player from your home state like this, but there were some rumblings that Biedscheid wasn't happy when Frank Haith left for Tulsa. Rumors that Biedscheid struggled at Notre Dame because he wasn't a committed defender. So when Kim Anderson came to town focusing on defense, there were raised eyebrows on how that would go over with Cam. I don't know Cam, but I've heard he's a great kid, maybe a little aloof at times, but not a bad seed. I doubt this is a runoff kind of problem. I wouldn't have been surprised to see him leave at the end of the season, looking for some sort of pro career or something. But I expected him to make a go of it, and I expected the coaches to put up with his allergy to defense because he can flat score the ball. The biggest concern for the Tigers going into the season is who is going to score the ball?

@SamSnellingRMN @HHKickball @K_W_Moore It hurts, but Teki is the real deal I'm told. Might turn out to be MU's best wing anyway.

So the change up of the roster begins to take some shape. Gone is Torren Jones, leaving more minutes available for Jakeenan Gant and possibly D'Angelo Allen. Also gone now is Cameron Biedscheid, leaving minutes on the floor for Montaque Gill-Caesar, Namon Wright, Allen and Tramaine Isabell. It's certainly not the end of the world as we still have 11 scholarship players on the roster, and all 11 are talented and could earn minutes for the Tigers this season. It certainly ramps up the inexperience a notch, but there are a lot of talented new comers.

Where things will get more interesting is how this could impact the players coming in for 2015, and how it impacts recruiting for 2015. We've already seen Kim Anderson branch out on a few new players potentially in the class, and there are some big big names coming in for the Georgia game weekend.

So there you have it Tiger fans, the answer to the riddle of how Mizzou could possibly take on any more players in the next recruiting class with just one scholarship open. If those players want to commit, there will be room for them. So, so long Cameron, we hardly knew ye, and in all honestly, we wish you nothing but the best in whatever you do, and wherever you end up. 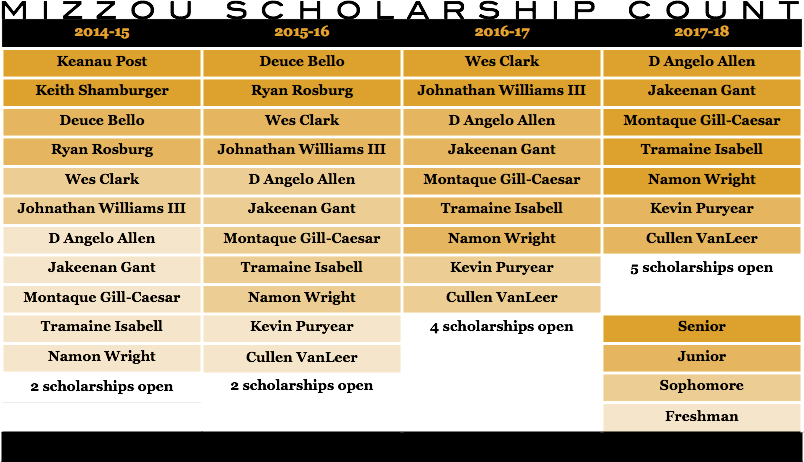 UPDATE: I feel a little ridiculous saying this, but #SOURCES are saying that this is indeed a personal issue that Cam is dealing with, and not a conflict between coaches and the player. Apparently it wasn't an easy decision, and that kind of chimes with what I mentioned earlier about the timing of it. The fact that this is happening mid-semester is very unusual. So with that said, I'll reiterate that we all wish Cam well, and hope that whatever he and his family are dealing with is something that is easily overcome.

Sometimes we need to keep in mind that there are always going to be rumors that circulate about players and how they fit in to the team, and the dynamic of different personalities within that context. It's hard when you first hear news like this to remember that it's probably not at all connected to what was being said before.

That's all I have on the matter. I was really optimistic about Cam when he signed on to play at Mizzou. I am sad that I'll never see him in a MIzzou uniform.