Missouri at Toledo: Tempo, consistency, and a "sneaky-great pairing"

Bud Sasser wants Missouri's offense to move faster (and that could happen with more consistency), communication is key on the offensive line, and Mizzou-Toledo is one of the best matchups of the day.

Share All sharing options for: Missouri at Toledo: Tempo, consistency, and a "sneaky-great pairing"

#TBT - We know a few #Mizzou guys who are familiar with Toledo. Make sure you're watching @ESPN Saturday morning! pic.twitter.com/trVdi8jH6n

On the whole, Missouri saw 30.6 percent more passes from the teams they played than they threw against anyone else and recorded 73.6 percent more sacks. In raw numbers, Missouri averaged 2.93 sacks per game on 40.5 throws per game, or one every 13.8 attempts. Other teams averaged 1.69 sacks on 31 attempts per game against the Tigers' 14 opponents, or one per 18.4 attempts.

PowerMizzou.com - Off the Edge with Brad Madison

In an effort to give Tiger fans more of an inside view of the college football season, PowerMizzou.com has added an expert to the staff. Former Missouri defensive end Brad Madison will lend his expertise each week. A different take from Madison will be posted each Thursday throughout the college football season. The format and content of Madison's contributions will change from week to week. Today, we start things off with a simple introductory Q&A and get Madison's thoughts on the Tiger program.

The entire unit is also going through smaller, subtle changes brought on with the addition of Ricker to the staff this summer. The splits are a little different, as the guards line up a bit further back, compared to Boehm at center. The snaps are handled differently, too, with Gatti looking back at the quarterback and alerting Boehm as to when he can snap the ball.

Offense needs a little more consistency as Mauk returns to his home state in week two. Mizzou at Toledo

Mauk three three touchdowns for 112 yards.  The rest of the game, he completed ten passes for 66 yards.  Tight end Sean Culkin had no catches and was targeted at least three times and Mauk only found six different receivers and two of those were running back Marcus Murphy and Russell Hansbrough.

Running back depth continues to be an issue for Missouri, which will be without sophomore Morgan Steward once again Saturday at Toledo.

Steward suffered a hip injury in practice early in camp. Initially, he didn’t expect it to be a long-term injury, but Steward remains sidelined nearly a month later.

"We’re not sure when he’ll return," Tigers coach Gary Pinkel said. "Hopefully in a few week, but that’s kind of a week-by-week evaluation as we go."

2. It doesn't seem like Toledo's offense is missing a beat, at least after one game, after losing Terrance Owens, Bernard Reedy and David Fluellen after last year. Has the offense changed at all with Phillip Ely at the helm?

Ely probably gives the offense a higher ceiling than it had with Owens. Ely is not as athletic as Owens, but he's better in the pocket. Toledo's offense this year is a different species of the same animal. In the long term, I think, Toledo will cut back on its option in the running game and run/pass option plays where Owens excelled, and lean more on multi-read, multi-level pass plays where Ely is really good.

Blake Samanas from SB Nation's MAC blog Hustle Belt answered some of my questions about this week's opponent, Toledo.

The Rockets will renew pleasantries with ranked Missouri after losing last year to the eventual SEC East champions. We asked Rock M Nation if the Tigers will make it two in a row.

Q: With four starters returning on an offensive line that allowed only six sacks last season, just how good is this group and does it match up favorably with Missouri’s stout defensive line?

Piotrowicz: "That’s the matchup that I’m most excited to see. I think Toledo probably has the best offensive line of any school not in a major conference, but Mizzou consistently has had great defensive lines. The Tigers’ beauty is in their simplicity but also their skill; they can create pressure with a four-man rush on just about everybody. Toledo has a really veteran group with some talent, so I don’t think they’ll be overwhelmed by any means. It’ll be a slim margin of victory for whichever team wins the matchup, but it’ll be significant either way."

New starting quarterback Phillip Ely threw for 337 yards and four touchdowns in his Rockets debut, leading Toledo to a 54-20 win over New Hampshire Saturday at the Glass Bowl. While New Hampshire, ranked fourth in the FCS, led 14-3 at one point, a 51-6 run to close the game meant the Rockets were able to turn an uncomfortable start into a comfortable win. Sophomore running back Kareem Hunt also added 134 yards and two touchdowns on the ground to help balance the Toledo attack, which racked up 360 passing yards to go along with 314 on the ground.

By the way, did you know Bud Sasser did a "Hype" video after the end of the 2012 season?

Coach Gossip: Trying to steal signals is just part of being a football coach - SBNation.com

Unlike some of Bielema's previous public comments, there's no confusion here: The greater community of college football coaches doesn't think for a second that Bielema was worried about Auburn winning because of stolen information. Why?

"Because everyone's cheating, all the time. Bret would never use that excuse," the coach said.

When it comes to opposing play calls, football is a John le Carré novel stuffed into pleated khakis. Every staff is trying to code-break the opposition.

Best option: No. 24 Missouri at Toledo

Ordinarily, a "Top 25, power-conference team vs. the MAC" matchup barely registers, but this is a sneaky-great pairing. Missouri looked average while grinding over an FCS creampuff in Week 1, and Toledo was able to hang with Mizzou last year in Columbia. This year the matchup is in Toledo, and the Rockets now boast former Alabama QB Phillip Ely under center.

Ostendorf: To me, this is the biggest potential upset in the SEC in Week 2. No, I’m not taking Toledo. But if South Dakota State can put 18 on Missouri, then former Alabama quarterback Philip Ely and the Rockets will make it interesting. Missouri 31, Toledo 28

Aschoff: Gary Pinkel is the all-time winningest coach at Toledo and actually wanted to play this game on the road. While I like the idea of challenging yourself with an early nonconference trip, this is a tricky game. The Rockets will scare the Tigers until late in the fourth. Missouri 27, Toledo 24

Last season, NFL quarterbacks attempted 18,104 passes. They completed just less than 60 percent of them, but that success rate depended on a number of factors, including who was throwing the ball, who was trying to catch it, and where on the field the pass was targeted. 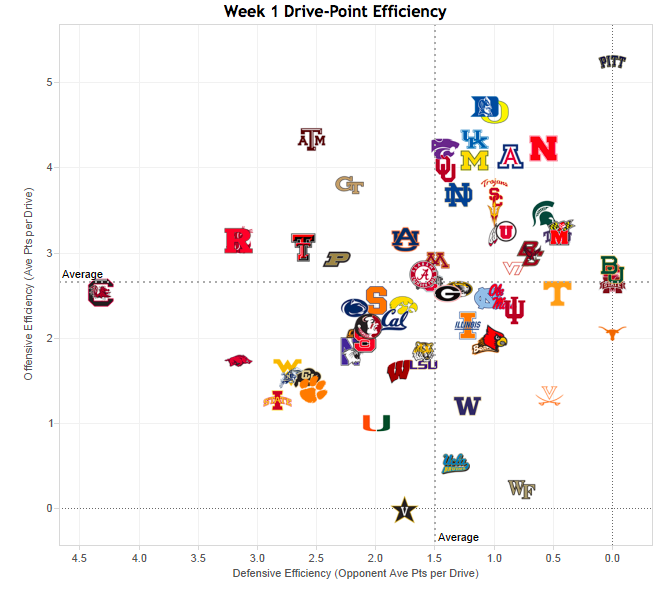 You see Mizzou right there in the middle behind Georgia? That's good right?