Eric Bossi got the scoop:

When senior shooting guard Cullen VanLeer saw that Missouri's Kim Anderson was calling on Friday he wasn't sure what to expect.

During the phone call, Anderson offered the 6-foot-4 sharp shooter from Pacific (Mo.) High a scholarship. The offer caught the three-star prospect off guard for a little bit but once it sunk in, VanLeer wasted little time accepting."The offer came this morning," VanLeer told Rivals.com. "I wasn't really ready for it. When it happened i was kind of speachless but once I realized it was real, I knew that is where I wanted to be at.

If Cullen VanLeer was caught off guard, so was just about everybody else.

It was well known that the Tigers liked VanLeer, and he had been on an unofficial visit a few weeks ago. During that visit he was told that there were a few guys ahead of him. It's quite possible that those guys must have been Jimmy Whitt and Antonio Blakeney because the day after Blakeney committed to Louisville, VanLeer got a call for HCKA to offer a scholarship. Congrats to Cullen, it's a big deal for him as he's grown up a Tigers fan, and he's excited to be a part of the Missouri program.

I'm excited to say I have verbally committed to the University of Missouri to continue my basketball career!!!#MIZ#ZOU

Let's talk a little about Cullen VanLeer first. VanLeer is a 3-star Shooting Guard from Pacific, MO. For those who don't know where Pacific is.... it's here:

(man, that image looked a lot clearer when I uploaded it)

Pacific is a small town outside of St. Louis, and there isn't a lot of attention paid to the small schools that play basketball in that area. Owensville, St. Clair, Union, Festus and others fly under the radar of Missouri Sports quite easily. And VanLeer is no different. He injured himself at the end of his sophomore season and was out of the AAU circuit which is the best time to make a name for yourself. Instead he got healthy, played last year and lit up competition during his junior campaign. He was healthy enough to play AAU this summer and Missouri sent Rob Fulford to see VanLeer play again and again. There was something they obviously liked about this kid.

VanLeer is an underrated athlete, a crafty scorer and a tough competitor. He's the type of player that can grow into an All-Conference shooter over the course of a few years, and really help space the floor for Missouri's big men to operate. I don't know that he's a player you expect to contribute much as a freshman. There will be a big difference in the step up in competition from where he's coming from. But his combination of good size, strength and ability to finish around the basket bode well for his growth as a player. Another #TrueSon for Kim Anderson to hang his hat on (well, if he allowed people to wear hats).

VanLeer isn't a flashy commit in the way that Blakeney might have been, but getting into the roster side of things this is the type of player that Missouri needs on the roster. The minutes might be a bit scarce on a young roster when VanLeer is a freshman. The backcourt expects to be loaded. You should get growth from both Wes Clark and Tramaine Isabell, you anticipate that your 4-star guards Namon Wright, Teki Gill-Caesar and Cam Biedscheid will be even better. It will be tough to steal minutes away from that set. Not to mention that Deuce Bello will be a senior. 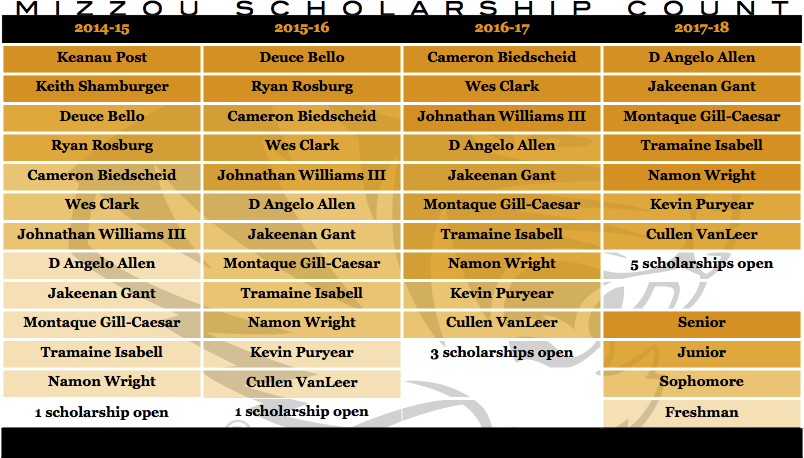 What will be interesting is where Mizzou goes from here? They have one more scholarship to give, and they need a big man. The two highest targets are Thomas Bryant and Caleb Swanigan. And quite honestly they need to lang a big. Juwan Morgan is still out there, but he seems unlikely since he and Puryear are very similar. Bryant probably has the highest likelihood due to his relationship with Fulford. They can still make a run at Ted Kapita, also. Reading some of the reactions, the last signing needs to be a bit splashier than the last two if you want to get the interwebz excited about it. It would do them a lot of good to land a guy like Bryant or Swanigan. We'll see if HCKA can reel that in.

I hope he plays for four years, and on his senior day we'll all be misty about the role he played in returning Missouri Basketball to national prominence.