Here at Rock M Nation, we believe in rewarding players for their outstanding performances on the field. The "Bow Tie Award" is given to the player we believe had the biggest impact on the game.

Mizzou wide receiver Bud Sasser had 5 receptions for 121 yards and 1 touchdown, averaging 24.2 yards per catch, with his longest going for 47 yards and setting up his 25 yard touchdown on the very next play.

However, that's not all Bud Sasser did in the game. With less than two minutes left in the 1st quarter, when Mizzou was only up 14-7, he made perhaps the play of the game when he forced a fumble after Toledo intercepted an overthrown Maty Mauk pass to tight end Sean Culkin

His forced fumble helped Mizzou extend it's nation-leading streak to 46 games and was the first time the offense has forced a turnover since Chase Daniel's forced fumble during the 2007 Cotton Bowl vs Arkansas.

According to reports, "Larry" Sasser is the name on his birth certificate, but Bud says no one, not even his parents, calls him by his given name.

Sasser is a senior wide receiver for our Mizzou Tigers, wearing number #21, and comes to us out of the state of Texas. In 2013, Bud started 9 games during the Tiger's 12-2 season, catching 26 passes for 361 yards and 1 touchdown (against Florida).

He's also famous for one specific play from 2013

In the season opener against South Dakota State, Bud had 2 receptions for 37 yards, including this 29 yard touchdown catch

Late Monday evening, members of Rock M Nation met with Bud Sasser to deliver the award and we were able to get a picture of the proud recipient of his new black and gold bow-tie. 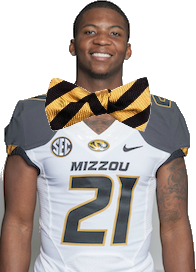