A Game of Numbers, Game 20: Kentucky

Good news, we don't have to worry about Kentucky again this year.

Share All sharing options for: A Game of Numbers, Game 20: Kentucky

I watched last nights game and sat there, painfully in the second half, thinking that I felt that Missouri was playing pretty well. I didn't think Kentucky was playing all that well. And they won by 16. The first half was incredibly entertaining. Yes it was a physical game, and there were some things in the first half that the refs let the players (on both sides) get away with that they shouldn't have, and then things got chippy.

Weird half so far, Shams misses a FT, Ulis with s TO, and double Tech, because the ref won’t call the initial body bump.

The second half changed all that. It was amping up a bit, then Marcus Lee decided he needed to take the ball from Johnathan Williams III. He crossed in front of him, bumped him in the process, and JW3 took exception to that. We know JW3 pretty well, he's not a big talker. So the mistake was made by the ref not cleaning up the initial action and letting Lee get away with the bump. After that a double technical was called, and the parade of whistles just killed an otherwise fun game to watch.

But that first half was fun wasn't it?

Just a couple quick thoughts, I hope this is the game that gets Ryan Rosburg out of his funk. We don't expect that he'll be an All Conference guy, but he's always been serviceable, and this year he's sunk to below that. Last night it was fun to watch him being aggressive at the rim, and *GASP*  making free throws. He still needs to find a way to get rebounds, as he only got 1 in 25 minutes of play last night. But that was more of a Missouri problem than a Rosburg specific problem.

A big bounce back game from Wes Clark. Not that he didn't play well against Arky, but missing those FTs you had to know there might have been some questions regarding his mental well being after that. And Wes came back with a career night. 19 points, 4 rebounds, 4 assists, 3 steals, and 2 turnovers. Pretty good from the guy that is quietly emerging as Missouri's best, or second best player on a nightly basis.

Now, TO THE KEYS!

A bit of good news/bad news here as Missouri only hit 25% of their three's, and only took 16. Good news is that Kentucky was 2 for 7. Simply put, Mizzou didn't have the shooting night they needed to be close enough to strike. I thought they were probably going to have to make 40% and hit around 10. So yeah, if only they had just made 6 more 3's they would have won!

Its just really difficult to score on Kentucky as they've shut just about everyone down, and Mizzou got to 50 points, but gave up nearly 70. They needed about a 5-6 possession swing and they didn't get it.

3) Take care of the ball, Turn them over

A half miss here, as the Tigers had 15 Turnovers. That's not good. And a bad night for freshmen as they had 10 of them. And they played a combined 52 minutes. I think most of us feel that this freshmen class can be special, they were NOT last night. Kentucky did have 14 turnovers though, including 4 from Devin Booker. So the defense came to fight and scrap, but at this point Missouri just isn't nearly good enough or experienced enough to beat Kentucky.

It might be the whiskey, but I want my By The Numbers tomorrow to consist of all fouls numbers. I’ll see if I can do it.

The average of minutes played by Karl-Anthony Towns, Marcus Lee, Montaque Gill-Caesar, Keanau Post and Namon Wright. All five fouled out. Namon was called for a foul in the picture below: 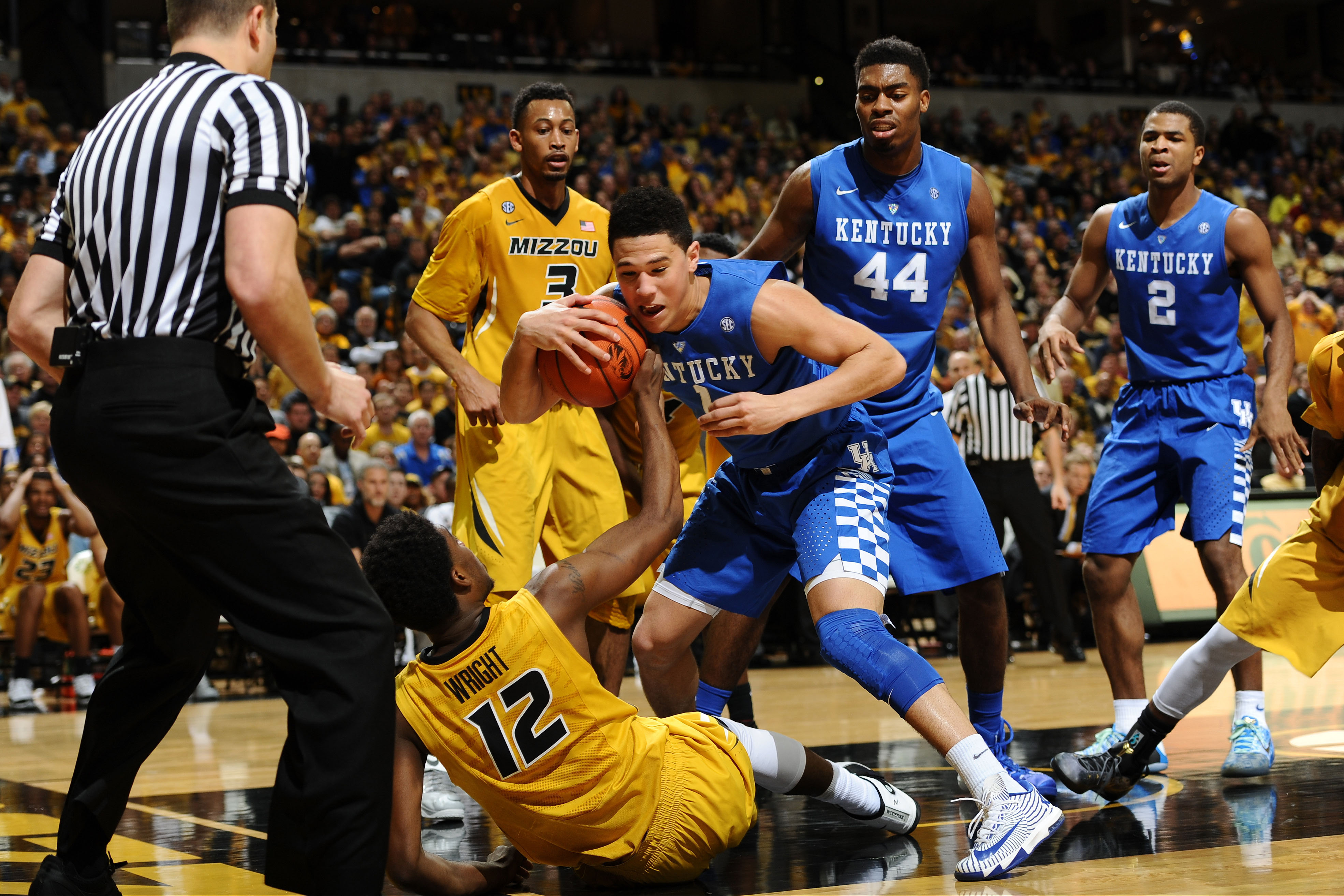 The average number of minutes played by Willie Cauley-Stein and Wes Clark who combined for zero fouls.

Second half fouls on both teams. Missouri had 20, Kentucky 15. Those are game totals. Wisconsin averages 13 fouls a game.

The exact time stamp where Keanau Post fouled Andrew Harrison in the second half. The foul was Posts 4th, and Missouri's 10th of the second half. That put Kentucky in the DOUBLE BONUS for the rest of the game. Missouri would foul 10 more times in the game.

Massive swat by Keanau Post on Devin Booker. (sorry, I couldn't resist not making this the finish)