I was really, really high on Georgia in the offseason, but the Dawgs have suffered two poor performances in a row and are now 4-2 and in desperate need of a bounceback win. Let's take a look at the UGA offensive depth chart.

Share All sharing options for: The first step to beating Georgia is forcing the Dawgs into passing downs

Part of my reasoning for liking Georgia so much heading into the season was that I felt like I was playing the odds with the quarterback situation. Brice Ramsey is a former star recruit, and it kind of looked like it was his time in Athens. (From quotes I've read, he thought the same thing.) Even though we didn't know much about him, I thought highly enough about Mark Richt's offensive chops to assume that things would work out fine. Georgia's offense was mostly awesome in 2014 with Hutson Mason at QB, and it appeared that Ramsey's upside was quite a bit higher than Mason's.

The first warning sign for me came when Greyson Lambert, a Virginia transfer, won the job instead. I wasn't incredibly impressed with Lambert at UVA, and the fact that he managed to win the job over Ramsey told me I may have overshot in my lofty top-5 predictions. Lambert was wholly mediocre against Vanderbilt's strong defense, but he destroyed South Carolina and Southern to such a ridiculous degree (33-for-35, 476 yards, 5 TD, 0 INT, which is outstanding against air) that I started to come around.

Lambert in the last two weeks, against Alabama and Tennessee: 25-for-57, 365 yards, 2 TD, 1 INT. He was benched at halftime in the Alabama debacle (Ramsey came in and threw two picks), and until a desperate, last-minute drive against Tennessee (in which UGA drove most of the length of the field but came up short of the end zone), he was 9-for-21 against the Vols.

When Lambert has time in the pocket, he can usually do decent things. Against Vandy, Bama, and Tennessee, he didn't have as much time, and he misfired often. So "pressure Lambert!" has quickly become a prerequisite to beating the Dawgs. That means establishing your pass-rushing bona fides (which Missouri seems to once again have) ... and it also means forcing Georgia to throw. Easier said than done, obviously.

Losing Nick Chubb was just the latest blow to the general college football populace. It's been a massively frustrating year in terms of the fun talent we've lost to injury -- Chubb, WVU's Karl Joseph, UCLA's Myles Jack, etc. Because of Leonard Fournette's ridiculous exploits, Chubb was falling a bit behind in the Heisman conversation, but he was still averaging 149 rushing yards per game and more than eight yards per carry. Only Fournette could make those numbers look anything less than Heisman-worthy. Now Chubb's lost for the season with what was a gruesome-looking knee injury.

But don't cry too much for Georgia -- Chubb's injury just means more time for this guy.

Michel was the No. 2 running back in the class of 2014 ... behind only Fournette. He was a blue-chipper, and he is terrifying in space.

The major difference between Michel and Chubb is that Michel doesn't GET into space as quickly. (That, and he's already fumbled three times in 76 touches this year; Chubb fumbled just once in 97.) He's more of an all-or-nothing back: whereas 47 percent of Chubb's carries gained at least five yards, only 30 percent of Michel's have.

Because of his value in space, Michel has been of far more use in the passing game than Chubb, but if the No. 1 item on the Beating Georgia list is "Force the Dawgs to pass," then Michel's relative inefficiency makes that slightly easier ... even if he turns right around and destroys you with a reception. 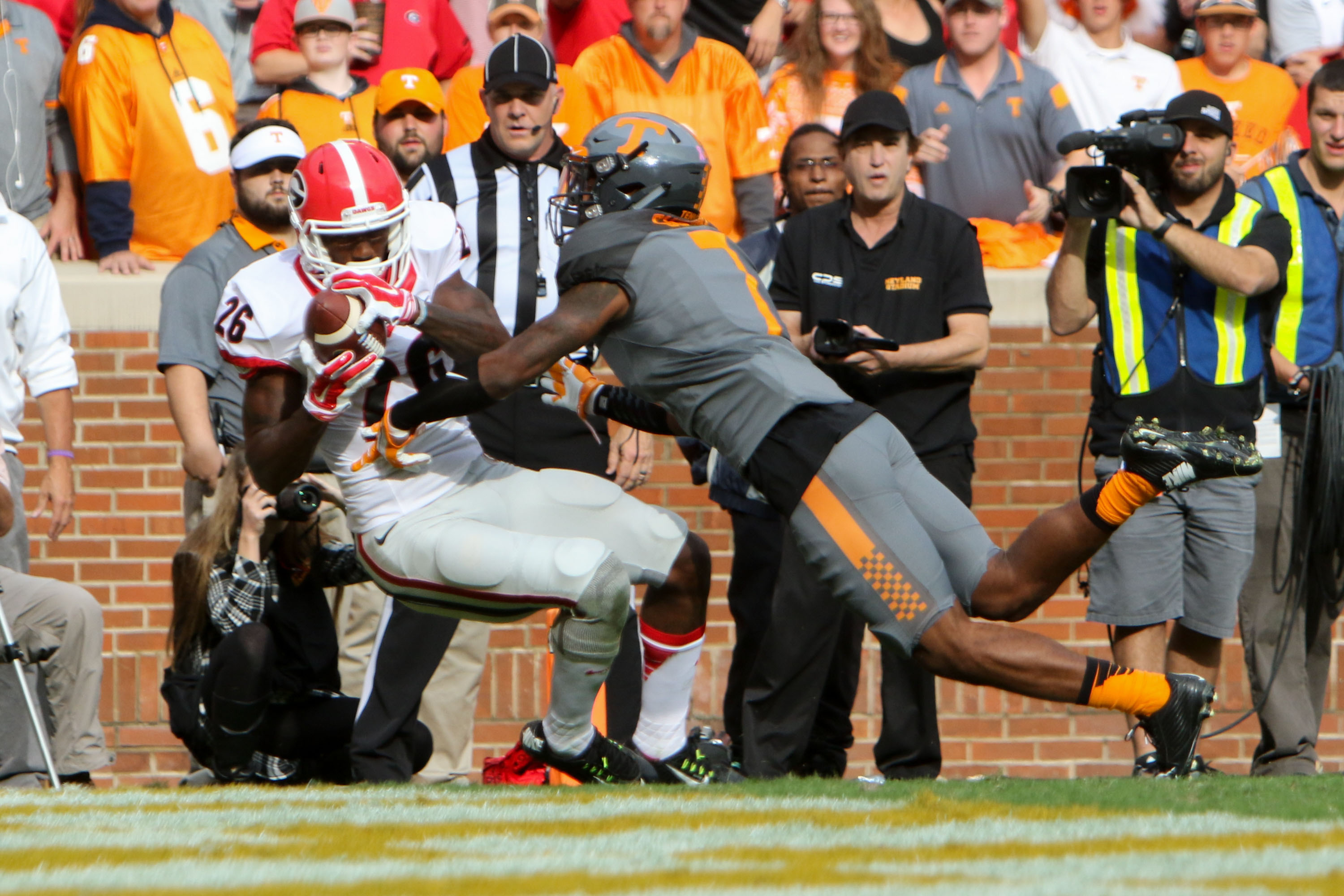 Malcolm Mitchell has had himself a career. As a true freshman in 2011, he was part of a devastating trio of receivers -- he caught 45 passes for 665 alongside Tavarres King (46 for 677) and tight end Orson Charles (45 for 574). In 2012, injury issues forced him to play cornerback for a while, but he still caught 40 passes for 572 yards, behind only King. In 2013, he tore up his knee on almost the first play of the season and redshirted. In 2014, he was slow to work back into the rotation and reach full-speed and finished with 31 catches for just 248 yards.

This year, Mitchell's back to playing like the receiver we thought he would become in 2011. He's averaging 16.3 yards per catch and 11.1 yards per target, and while he struggled against Alabama, he still has 16 catches for 272 yards and two scores in three SEC games. That three-game performance would rank him second on Missouri in catches (in six games, only Nate Brown has more) and an easy first in yards.

When Georgia struggles in the passing game -- which has only been for basically 2.5 of six games -- it's been because of everybody else. After Mitchell come a freshman (Terry Godwin) and an inconsistent junior (Reggie Davis), both of whom have awesome speed, next to no size, and minimal experience. We're used to an enormous, seasoned Georgia receiving corps, but this is not that. (This, in turn, has had an impact when it comes to blocking on the perimeter, as well. Mizzou can relate.)

Georgia's five current skill position starters -- Michel, Mitchell, Davis, Godwin, and tight end Jeb Blazevich -- have accounted for 75 percent of Georgia's targets this year, and the next two most frequent targets on the list (Isaiah McKenzie and Chubb) are questionable and out, respectively, because of injury. Variety is not a strength for the Dawgs' passing game this year.

Of course, variety only matters if you can stop Mitchell. Aarion Penton did a solid job against both South Carolina's Pharoh Cooper and Florida's Demarcus Robinson, though, so there's obviously hope in that regard.

Georgia returned four starters up front and has started the same five-man combination for all six games. It's a perfectly fine line -- 11th in Adj. Line Yards (fourth last year) -- but it's been a smidge leaky this year. The Dawgs rank 50th in stuff rate (run stops at or behind the line) despite Chubb, and they're 46th in Adj. Sack Rate. These aren't awful numbers, but they're not elite either.

As has been the story all season for Missouri, line play will tell the tale. If Mizzou's defensive line can create more advantages for itself than Mizzou's offensive line allows, the Tigers will have a shot. The defensive line has held up its end of the bargain virtually every week, though, and Mizzou is still only 1-2 in conference play.

Regardless, no matter what MU's OL does, the defensive line has to shine. And it might.

Missouri drops a 9-6 decision to Georgia, falls to 4-3