Barring any sort of personnel changes or tactical revelations, you basically know what your team is capable of come the 12th game of the year. At least, we certainly knew everything we were going to learn about Missouri. The final game of the season was basically a greatest hits compendium featuring all of our favorites:

I'm not big on words like "quit" and "choke" and whatnot. I saw the "q" word thrown around a lot on Friday, and I immediately went into full Empathy Mode -- they didn't quit, they're trying, but they're demoralized, focus dissipating, etc., etc. But regardless of our definition, this guy didn't quit on Friday ... even if it looks like he's doing jumping jacks in this picture. 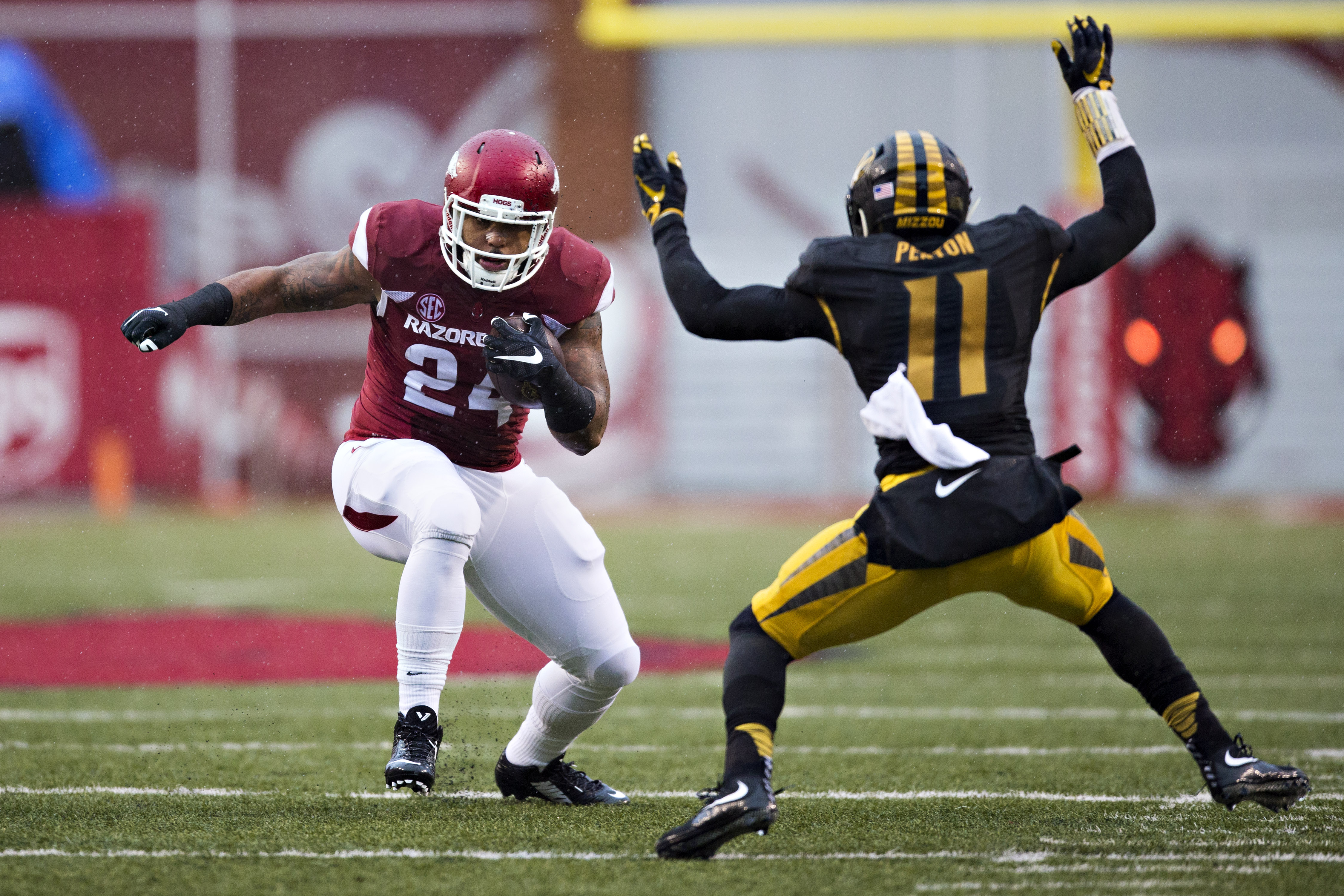 Aarion Penton was trying desperately to make something happen. He had the longest 0-yard punt return you'll ever see and ripped off a 16-yarder as well (which, for Mizzou in 2015, felt like 50 yards). He also had three solo tackles, an interception, and a breakup. He was busting his ass, and I very much appreciated it.

Arkansas' secondary and pass rush haven't been very good in 2015. Both dominated on Friday. Drew Lock was hurried immediately on most of his early throws, and when he wasn't, he either didn't have anybody open or a ball would bounce off of someone's hands (like a third-and-2 rollout that hit Jason Reese in both hands but almost resulted in an interception anyway).

For almost the entire season, Drew Lock was needing help that he just wasn't receiving. BYU game aside, his receivers weren't stepping up to make huge plays. His line was making mediocre pass rushes look all-world. And yes, the overthought play-calling seemed to be taking easier, more straight-forward options off the board.

I've forgiven a lot of the play-calling issues for all the reasons I stated earlier in the year, namely "when you can't run or pass, what's a guy supposed to call?" We saw the effects of that a lot on Friday -- Josh Henson had absolutely no faith in the interior of his line early on, and it resulted in odd calls like a rollout to Reese on third-and-2 and a stretch play for Tyler Hunt on third-and-1. Even last year, as the offensive returns were diminishing, Henson felt comfortable enough to just try to plow forward on third-and-short. Not this year.

If you want to blame Henson for that, that's fine; that this was almost certainly his last game as Mizzou's offensive coordinator in no way breaks my heart. But ... well ... you and I wouldn't have found many good plays to call either.

Spoiler alert: This is probably going to be the No. 1 key all season. Missouri's offensive line was between bad and terrible for most of four games, and Mizzou had one of the least efficient offenses in the country. ... This key is for both sides of the ball, of course. If Mizzou's defensive line wins its battle, and the Missouri offensive line can either fight to a draw or only occasionally lose, the Tigers might be able to position themselves to win. BUA this has to be a net win for Mizzou, and preferably a large one.

Ish Witter ended up having another quietly solid performance, with six carries for 33 yards. That means he finished the year by rushing 37 times for 176 yards (4.8 per carry) over his last four games. Considering he averaged 3.8 per carry for the first eight games, that's demonstrable improvement. And while he didn't see any targets in Fayetteville, he still had three catches for 54 yards in the last four games and 15 for 143 on the year.

That said, the blocking was still dreadful, especially to start the game. Before Witter broke off back-to-back solid runs (a nin-yarder and a 17-yarder, either of which would have been a touchdown if he had shown any confidence in his traction on the wet field), Mizzou's first eight rush attempts (not including a sack) had gained just 23 yards -- 17 on two carries and six on the other six.

And yeah, Arkansas' pass rush looked better than it had all year. I said things of that nature a lot this year.

This one's been the same all year, too. Arkansas isn't nearly as good at the special teams and field position games as Tennessee is, but Mizzou was bad enough at the return game and three-and-outs that the Tigers would have been murdered in the field position game against anybody. It is once again a necessity that Mizzou break even or come close in this department.

Mizzou's early barrage of three-and-outs allowed Arkansas to tilt the field pretty drastically without even moving the ball itself. And ... well, then Arkansas began to move the ball.

(Meanwhile, somehow Arkansas was only credited with two fumbles. I distinctly recall, like, 12. I, uh, may be misremembering that.)

As always. Creating scoring chances is only half the battle, and for most of the year Missouri has been even worse at finishing drives than it has been at creating the chances to begin with. The Tigers have actually scored touchdowns on three straight chances. Keep that streak alive.

The score if those averages were flipped: Mizzou 21, Arkansas 4. Okay, so four points would have been difficult to pull off, but this serves as yet another reminder of a) the importance of finishing drives and b) how bad Missouri was at it this year. Arkansas only created one more scoring opportunity than Missouri, and while there's some context here -- the Hogs packed it in once up big, and if we're being technical, Missouri could have kicked a FG on that last drive, therefore averaging a whopping two points per opportunity -- this game could have played out differently had execution been different. But there was a force field near the goal line all season for Missouri. On the "Fix it" list for the new coach, this is in the top two or three.

Hunter Henry is one of the most frequently-used tight ends in the country. He's going to catch more passes than Missouri's tight ends; of that, there is little doubt. But Missouri's tight ends have to make a contribution. They did against BYU; they very, very much did not against Tennessee. When Mizzou is utilizing all of its options in the passing game, the Tigers can get away with having less effective options at WR. So yeah. Get Culkin and Reese to within range of Henry, and see what happens.

I did not expect Mizzou TEs to be targeted more than Henry. I also would have expected Mizzou TEs to catch at least one of five passes.

Mizzou's offense has been horrifically inefficient this year. Arkansas' defense has been almost as bad. Here's to hoping the movable object is more movable than the resistible force is resistible. Or something like that.

Behold, the most remarkable consistency you'll ever see:

Arkansas' offensive success would have won the game on its own -- Mizzou still limited big plays for the most part, but after those first couple of drives, the Hogs did an infinitely better job of both blocking and creating easy chances for yardage.

Brandon Allen wasn't asked to do much but made just about every throw he needed to, and the Hogs' offense was able to take it easy because Missouri was making the rather mediocre Arkansas defense look really, really good.