The bellcow of the 2015 recruiting class is officially a Tiger. HUZZAH!

This is a big one, literally and metaphorically. Terry Beckner Jr., the No. 2 prospect in the country according to ESPN.com and a top-40 recruit according to every recruiting service in existence, just chose Missouri over Florida State, Ohio State, and Auburn live on ESPNU. The East St. Louis defensive lineman held true to long ties between Mizzou's staff and his family and decided to stay rather close to home.

Between the local ties and Mizzou's success on the defensive line, it seems rather logical that Beckner would choose the Tigers. But it was a tough recruiting battle; Beckner visited Florida State, Ohio State, and Auburn, and FSU made a particularly strong, effective push. But Beckner stuck with the Tigers, whom he had mentioned as leaders for nearly a full year.

So what is Missouri getting in Beckner?

For starters, Missouri is getting an oak tree. High schoolers aren't supposed to be as strong as Beckner appears to be on film. Local recruiting analyst Danny Heitert noted that to Dave Matter as well.

"What you won’t see Terry do that you saw Sheldon (Richardson) do is torque himself through the gap, come out on the other side, change direction without slowing down and run a stretch play down from behind. That’s not Terry Beckner. He’s going to give you 100 percent consistency in gap control and block shed and assignment football. That’s no small thing."

"If used correctly." One figures Craig Kuligowski will know what to do with this guy.

For the first time since 2012 and the fourth time ever, Gary Pinkel has signed a five-star prospect. Welcome, Terry. This is turning out to be one hell of a class. 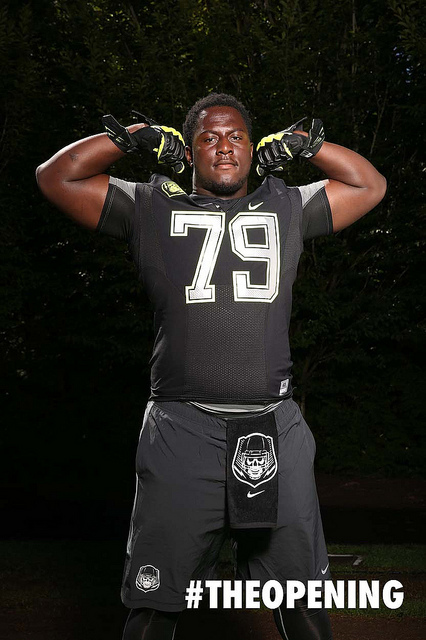