We hear about it a lot, but just how important is team chemistry and does it play a bigger role than people think?

The year was 1980. Herb Brooks led his U.S. hockey team into Lake Placid in the Olympic Winter Games. The national team stunned the Soviet Union in a 4-3 upset victory, thus known as "The Miracle on Ice." But was it a miracle? Before the puck dropped on center ice against the USSR, Herb Brooks was asked about his roster. It featured only one returning player from the 1976 Olympic team, the other 19 were collegiate players. In fact, the average age of the U.S. team was 21 years old, the youngest team in U.S. team history. The question to Coach Brooks was if his team had the best players in the tournament? He calmly responded, "It's not about finding the best guys, it's about finding the right guys."

It's called checking your ego.

Team chemistry may be the most important aspect to a team's success throughout a season, at any level, in any sport. It could be more important than X's and O's, more important than statistics, or athleticism, or even depth on a roster. To succeed in any team setting, the team must be put higher than any individual goals or accolades. Some of the best teams in sports have relationships on a personal level that are stronger than oak. The relationships between teammates, between coaches, and how you come together can be bigger than talent, or what star you were as a high school recruit, or how many points you averaged the year prior. It's called checking your ego. It has no place in team sports, it has no place for a group of individuals trying to accomplish a goal, and it can hinder your potential as an individual and group. We see teams every year underachieve that are talented, and we see teams every year who overachieve that flew under the radar with less talent.

It's trust, it's a commitment to one another, and it's a bond that sometimes is unbreakable.

This year, the Atlanta Hawks of the NBA had the second-best record at the All-Star Break. They were not looked at as a contender during the preseason. Now, they are currently the favorite in the Eastern Conference. There are plenty of other teams that have far more talent than the Hawks, but their team chemistry and belief in their head coach Mike Budenholzer has them taking the conference by storm. Their chemistry is the difference maker, and players and coaches have said that throughout the season. Chemistry remains an underrated aspect of building a title contender. That's not to say talent isn't an important piece, and a requirement for winning at a high level, but having the ability to get through conflict and adversity as a group can be more powerful than talent. It's trust, it's a commitment to one another, and it's a bond that sometimes is unbreakable. Some of the most skilled teams can fall short, which stems from lack of trust when adversity hits.

In college basketball, every freshman wants to make an impact immediately. They want playing time, they want to play a role, and they come from backgrounds where they were "the guy." It's why it takes time to adjust, it takes leadership and direction to show them the way, and it takes relentless preparation individually and collectively. It's why transfer numbers are so high. Freshmen have troubles seeing the big picture. They want immediate gratification, they want the pat on the back, and they don't understand the sacrifices you have to make and the toughness you must have to be a great player. Most freshmen think they are the big man on campus, they can do no wrong, they've "arrived", and don't accept coaching or teaching. What they don't realize is the sooner they can get past all that, the sooner they can humble themselves, and the sooner they can start thinking about team is when they will prosper as individuals.

There has to be synergy with a basketball team. 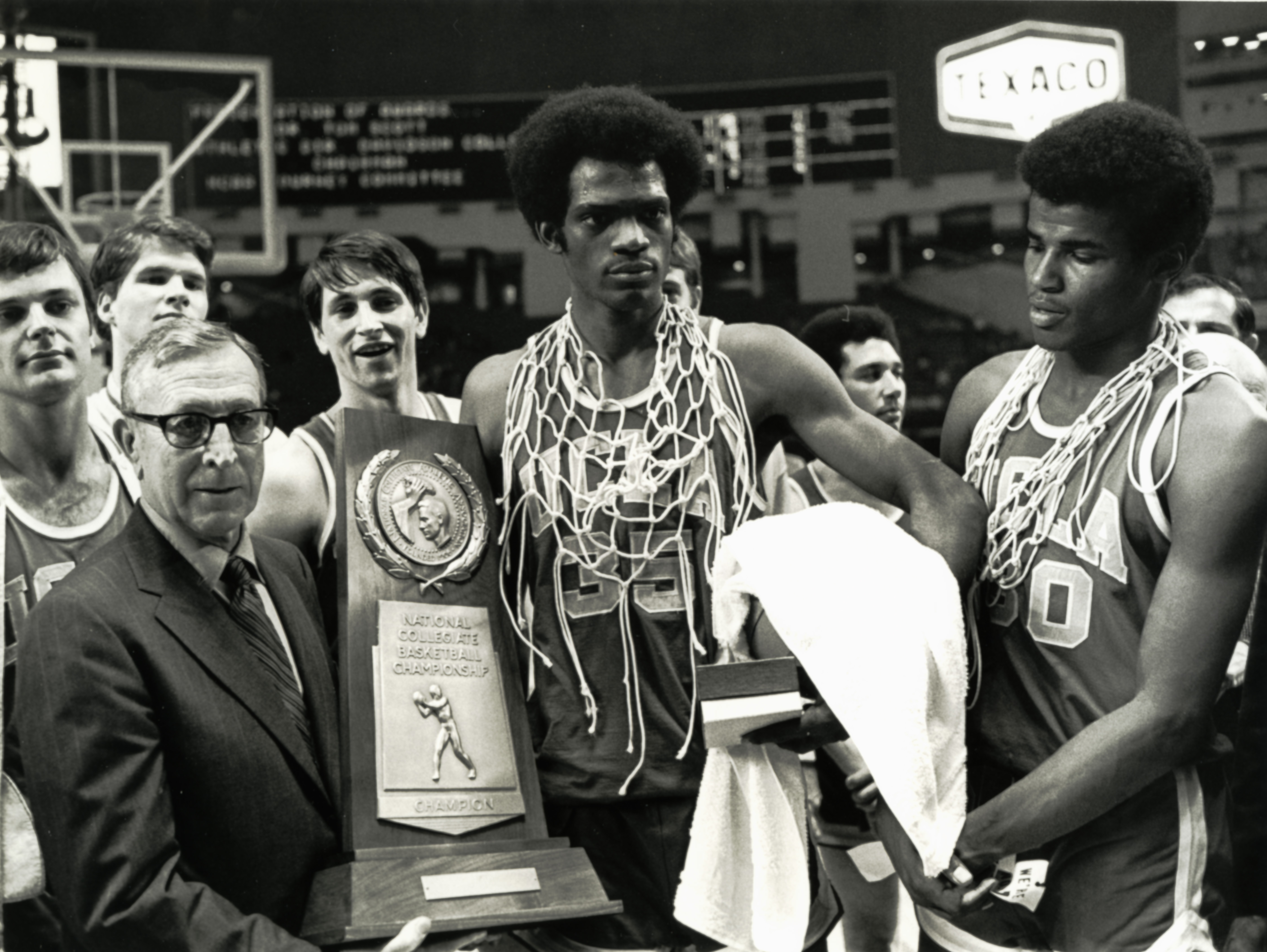 John Wooden puts it best: "It's amazing what can be accomplished when no one cares who gets the credit." Great basketball coaches have the ability to handle conflict, to motivate, to push the right buttons, and to lead above all else. There has to be synergy with a basketball team. Phil Jackson was not one of the best X and O coaches, but he has a great ability to bring a bunch of guys with different backgrounds and personalities together in almost perfect harmony. He gets his players to mesh. Yes, he had Michael Jordan and Kobe Bryant. But he also had role players, players with ego, players with attitudes, and won 11 NBA titles. His teams had great communication. Every player didn't have to love each other, but they sure as hell had to respect one another.

It's so easy to use my class as an example. We did have a coaching change after our junior year, but we also lost one of our best players in Laurence Bowers to a preseason ending ACL tear. The talent we had was all returning from the year prior, so nothing changed from a personnel standpoint. It was that offseason where we grew together. We worked with two Navy seals to build a stronger bond with teamwork, battling adversity, and thinking and acting as one. I still recite in my head "IT'S NOT ABOUT YOU! IT'S ABOUT THE MAN NEXT TO YOU." Navy seal training, even for a day, and probably a watered down version, was intense. It made you appreciate not just those brave seals and what they sacrifice, but also made you admire what they were teaching you. The lessons we learned prior to the season even starting were where our year was built. It was the foundation we found in early September. As we went through the season it felt like the wins came easy, all 30 of them, because we were together and all we needed was a system. I can remember watching teams break, crumble, and point fingers in frustration at each other. Those same issues were how it felt our junior year. It was a selfish environment. That all changed, and it was our captains that led the way and set the tone.

They knew they belonged, and they played like it.

Look at Brad Stevens during his time at Butler. Those teams loved each other, they loved their coach, and they had great chemistry where you never saw them panic. They were vocal, they let their play lead, and they were about the team and not themselves. They were unselfish, they were tough, they defended, they believed in themselves, and they didn't listen to all the "Cinderella" talk during their run. They knew they belonged, and they played like it. It's why they went to two consecutive back-to-back National Championship games in 2010 and 2011. That was no fluke. They were an elite team, but might not of had the one and done players, or the 5 stars. Gordon Hayward and Shelvin Mack were the two players that stood out on those teams, but they had also had guys step up into roles in Matt Howard, Shawn Vanzant, and Ronald Nored (Now working in the Celtics organization). They new they had to have everyone, and you could tell that a bond was there. Locker room mojo is very much a real thing. As a coach, it's important to ask yourself if your players like one another? Do they get along on and off the floor? Do they look out for one another? Do they back each other in difficult times? Those all are very easy questions to answer when chemistry is present.

There can be no outside distraction, or listening to what "you deserve" individually.

We see it in March a lot. Teams that have the 5 most talented players on the floor does not always mean they'll win a game. Some teams have the "it" factor. The bond, the unselfishness, the little things like picking up a teammate off the floor, or picking up a teammate when he is struggling are the little factors that can create team chemistry. Teams with great chemistry accept roles, and excel in that role. Whether you're the scorer, the rebounder, the energy/glue guy, the defensive stopper, or the 6th man, you must know your role. It doesn't matter if you're the best player, or the worst player, you must have everyone. Everyone is important, everyone plays a part, and everyone should be treated equally on and off the floor. There can be no outside distraction, or listening to what "you deserve" individually. You deserve to be at your best for the guy standing next to you, for the coach that saw something in you, and for the school that is giving you an opportunity. It's a privilege, and when you respect that as a group you become one.