Let's talk about the year that was in Tramaine Isabell, a disjointed year with some high highs and some low lows. 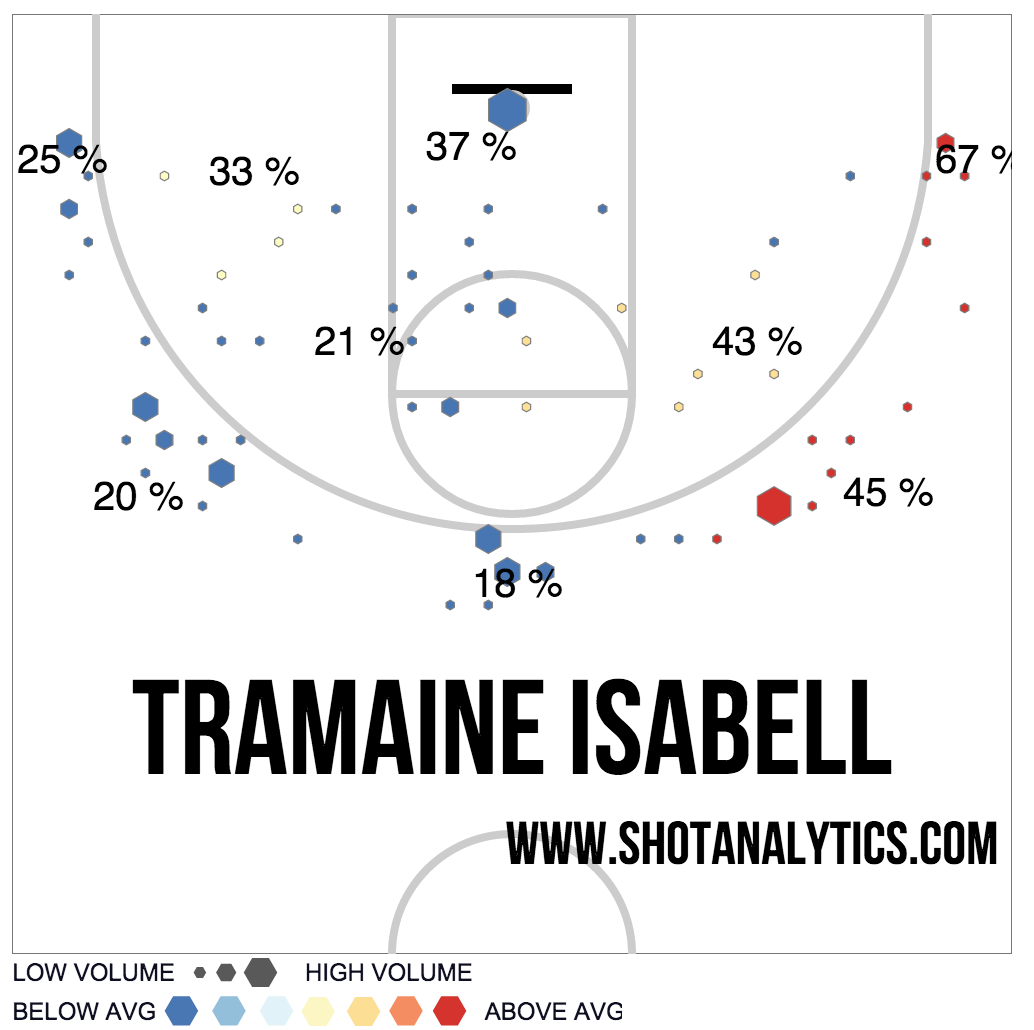 Before we get started I need to make one thing clear, I love Tramaine Isabell and all that I think he'll become, just wanted to get that out of the way...

Tramaine Isabell, much like D’Angelo Allen came to Mizzou very late in the recruiting process, and like D’Angelo was signed by Kim Anderson on the word of his lead recruiter Tim Fuller, having been unable to see him play due to NCAA recruiting and coaching restrictions. Initially signed to home state school, Washington State, TI opted out of his letter of intent when Ernie Kent was hired on to take the reins at Wazzu. TI was set to fill an important role as the only true point guard on the bench and hopefully get minutes running the show, but as freshmen are wont to do he had some on the court issues as well as off.

There's a reason why his team won the state championship in Washington last year, and it wasn't because they were the most talented. Isabell willed his team to victories. And I can see him willing Mizzou to a lot of victories as he develops.

Tramaine Isabell Player Preview - RockMNation.com
In looking at TI’s stats you see a player that is capable of filling the stat line given a higher amount of minutes to get in the flow of the game, such as against Auburn, Lipscomb, Arkansas and South East Missouri, whereas in other games where he’d get less than 10 minutes he wouldn’t have much of an impact on the game.

Let’s be honest with ourselves here, most freshman point guards aren’t going to be handed the keys to offense right off the bat unless they are a special talent, or there is a complete and total lack of depth when they get on campus. In this case for Tramaine to get major minutes in this offense would have required that Keith Shamburger or Wes Clark not have the productive years they had…and he would have had to stay in the good graces of his head coach. And let’s get that out of the way right from the top shall we? TI was suspended for four full games and for a half a game against UT a little before the full suspensions occurred. Word was that TI was being disrespectful to his coaches in practice, and talking back. And in Kim Anderson’s first year that wasn’t going to fly. Anderson when hired said he was going to make these 18 and 19 year old boys into men, and if he had to drop the suspension hammer for transgressions he would and did.

But we’re not here to talk suspensions and discipline, we weren’t in practice and any knowledge we have is second or third hand. At some point before the roadie at Arkansas Anderson determined that TI could help this team and cleaned up his act and that he had earned minutes on the court. And in that very game, TI repaid his coach’s faith in him putting up 13 points on 5 of 9 shooting, including 3 of 5 behind the arc. And that’s what makes TI such an interesting player, he’s clearly got the skills to be a productive member of this team, but like all the other freshmen on the team, he played like a freshman.

In looking at TI’s stats you see a player that is capable of filling the stat line given a higher amount of minutes to get in the flow of the game, such as against Auburn, Lipscomb, Arkansas and South East Missouri, whereas in other games where he’d get less than 10 minutes he wouldn’t have much of an impact on the game. Or at worse, a guy flinging the ball to a teammate that wasn’t there. From a defensive standpoint, Tramaine acquitted himself well, and showed some active hands, though like Clark last year, those active hands tend to turn into ticky tack fouls from a reffing standpoint, and that's something he'll grow out of. He's not lockdown at this point but enough of a defensive presence to keep the game in front of him.

The big positive I would take from this year is the confidence that Tramaine showed. He clearly wasn’t afraid to run the offense and be the man, and that’s what you need from a point guard. He’s the guy running the show and he’s got to be confident in his passes and his shooting, and when good Tramaine showed up, there was no other player on this roster with the swag and confidence. The no look passes, spot up three pointers, and a willingness to drive to the rim that no one else on this team showed outside of Wes Clark; it’s all part of the package Tramaine can bring. I mean, the OSU game ender alone showed the ice water in the veins that a big time player needs. Coupled that with the fact that when Mizzou had a chance to take the lead with 30 seconds left in that same game, Kim Anderson let Tramaine run the show and set the offense in motion; that he was stripped by new Keiton Page is irrelevant.

All things considered I imagine this is not the freshman season Tramaine wanted to have nor was it the season his coach or the fans wanted to have. But as the saying goes, what doesn’t kill you only makes you stronger and I think Tramaine and Mizzou are going to reap the benefits of this year’s struggles next year. Any player that goes through the year he had, the highs (OSU!!!) to the lows (suspension) and sticks around clearly wants to be here and be a part of a team and has learned something. Many will point to Wes Clark as the natural leader for this team next year and the following, but there’s just something about Tramaine that makes me think he’s going to end up being the guy behind the guy if he's getting consistent minutes, think like a Mike Dixon (without the issues) role, a leader but not "the guy." He's going to delight us, infuriate us and leave us wanting more. Is he a Clarence Gilbert or Gilbert Arenas? Who knows, but ideally next year we're talking about a player getting over 20 minutes a game, scoring in the 10 point or more range, around 5 assists and continuing his maturation as a player and a leader for Mizzou.

Tramaine had a freshman year that included the most clutch shot of the season in KC against Oklahoma State, and a suspension where we questioned if he'd see the floor again. Tramaine had some good moments, but also had moments where he looked lost. The one play that stands out to me was at home vs. Auburn on senior night, following a long suspension a few games prior. Tramaine had a very bad turnover that saw his defender rip the ball from him and pass ahead for a transition break. Tramaine sprinted the floor and deflected the ball of the Auburn player's knee, and got us the ball back in what was a last second win at home. If Tramaine didn't make that play, we probably give up that lay-up and are in OT. It was a very unselfish play that Tramaine didn't make earlier in the year. For me, I felt he learned that he had to play hard to stay on the floor. The teaching was finally getting through to him, he was responding the right way, and he was helping the team win a ball game. Tramaine needs to become more confident with the ball in his hands, needs to be able to play the point while taking care of the ball, and he needs to value possessions more offensively. There is the right play, and then there is the play where you try and go get it. The right play is what Tramaine needs to always tell himself. Don't go get the game, let it come to you. Be patient, trust in yourself, play relentless defense, be a pest on the ball, and continue to play angry. Tramaine was at his best when he felt he had something to prove, but he can't always depend on that. He has to bring the mentality every day in practice so it will translate in games. He's a talented player, he's undersized, but if he can play hard with a chip on his shoulder he will be fine. An important off-season for him, as is with all the freshmen.

Isabell coming back next year has to be considered a positive. While his play, and actions on and off the court, were up and down all year, Isabell is a guy that is incredibly intriguing as a player. I said last time that Isabell reminds me a bit of Marcus Denmon. What made Denmon such a great player was his fearlessness on the court. He was gutsy and that sheer sense of will exists in Isabell. I'm not sure he's there yet, and I think some of his struggles last year were dealing with a change in the level of competition vs expectation. I mean that in as much that Isabell struggled with the losing, and because I think he's a fiery competitor... he struggled with not being able to fix it. Which he had done so often in high school.

Either way, Isabell is a guy who can play and be a winner at this level. He's just gotta stick it out.

Isabell pretty well embodies this season.  He was behind some of the highest highs - like the shot that sent the Okie State Game into overtime - and the lowest lows - being suspended for a bunch of games for having a bad attitude.  When he was playing, he was utterly unintimidated by the stage, which is something you like to see from a freshman.  And at times, he displayed dazzling quickness.  He's got a good looking jump shot.  And he's a decent distributor.  Sometimes, though, he used his quickness to spin uselessly into trouble.  Other times, he simply disappeared into the background on offense (which, admittedly, was preferable to taking and missing a bunch of jump shots).  His defense often left something to be desired.  And...yeah, suspension.  He's clearly got some growing up to do.  But in some ways, Isabell reminds me of Wes Clark.  Fearless and assertive on the court.  If he really has bought in to Kim Anderson basketball and develops some defense, a starting backcourt that includes a senior Wes Clark and a junior Tramaine Isabell could give other SEC teams nightmares in a way a Mizzou backcourt hasn't done since JT Tiller and Zaire Taylor graduated.