Now that the season has wrapped up, we're reviewing Mizzou hoops player by player. Today it's Jakeenan Gant 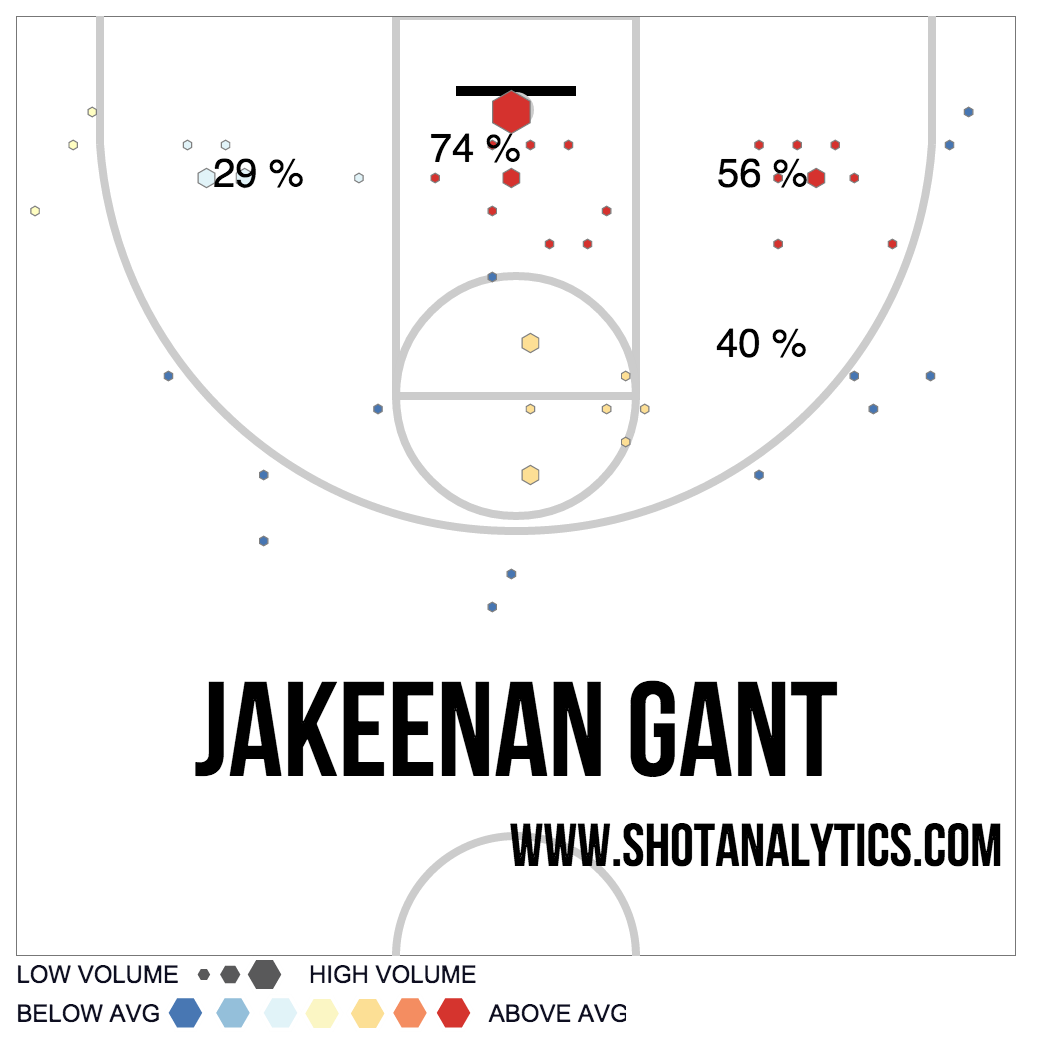 I don't think there was a more anticipated debut than that of Mr. Basketball Georgia this past season, and the fact that the Tigers had to wait an extra two months for that debut made the hype and excitement for Jakeenan that much more palpable. Jakeenan was originally recruited and signed by Frank Haith, and through some strong salesmanship from Tim Fuller and a closing argument  from Kim Anderson, Jakeenan held true to his letter of intent and joined the freshman class at Mizzou. And like others in the class, Jakeenan had his ups and his downs in his first year in Columbia.

However it's still a pretty raw situation for him, and he's still developing. Up front, it's hard to know what to expect. We didn't get 6 points a game from JW3 last year, and he was higher rated out of High School. So I think it's safe to say that year 2 is going to be the bigger one for Gant, but he should be able to help a lot.

Jakeenan Gant Preview - RockMNation.com
Gant got shoved around by bigger and stronger post players all season long, leading him to be exposed on the defensive end of the floor, but also on the offensive end.

Well the season started and no Jakeenan, sure he was there, but he couldn't be out on the floor and no one really knew anything until that fateful day, December 12th when he was cleared and able to suit up against Xavier. Interestingly, Jakeenan missed 9 games which is the requisite amount of suspension time from the NCAA when impermissible benefits are given. When Jakeenan did see the floor in the game, he made quite the first impression. Stepping on the court Jakeenan immediately hit a three pointer, made some free throws and closed out the first half with another three pointer. In the second half he'd hit another three and throw down a monstrous dunk that would send the fans into a frenzy and expectations flew out the window. in short it was the best possible debut, but in the worst way. Mizzou fans had seen the team start slowly and were thinking this could be the missing piece to turn things around, but the problems Jakeenan had weren't easily overcome.

In our November piece, the hope was that in his first year Jakeenan would be able to have a similar freshman year to what JW3 had his freshman year based on their similar stature and style of play. Looking back, again that might have been unrealistic because of the pieces around the two players. While JW3, had Jabari Brown, Jordan Clarkson and Ernest Ross, Jakeenan had JW3 (in essentially the same position) and Wes Clark and Keith Shamburger. Good players in their own right but not nearly as mature or able as the players JW3 had his freshman year. That being said Jakeenan did have some great and promising moments this year, one such shown in the gif below. Getting a block on one end and then hustling down the floor for an alley oop dunk on the other.

The limitations for Gant though at this point seem to stem mostly from his lack of strength and weight. Gant got shoved around by bigger and stronger post players all season long, leading him to not be exposed on the defensive end of the floor, but also on the offensive end. Jakeenan was not able to play with his back to the basket or get down low for easy lay ups and put backs for a player of his size. Like D'Angelo Allen, Jakeenan will need to spend some time bulking up and eating everything in sight to become the player he'll need to be next year, now that JW3 has moved on. Jakeenan showed he had a nose for the ball, getting to loose balls and getting the occasional rim rattling put back dunk off a miss, but again due to his size he was, like the other freshmen, very inconsistent.

Jakeenan also showed an ability to hit the outside shot, which if made consistently should help Mizzou's ability to stretch the floor and open things up for his other teammates. Again though, this is predicated on his work, but his teammates at the guard position as well. What I'm most excited about, after looking at his stats is for a player of his size, his ability to hit free throws with consistency. If Jakeenan develops his body and can get to the basket down low, while picking up fouls, his game and Mizzou's opens up tremendously. On the defensive end, he's clearly got hops so expecting his blocked shots numbers to go up and his defensive boards to improve should be something to expect next year. But again, like his offensive game, how far he progresses will depend on how much weight and strength he can throw on in the offseason. Get bigger, get strong and he'll get better.

I think it's safe to say that Jakeenan's got a bright future at Mizzou and that expectations for him should be elevated coming into next year as presumably a starter in the 4/5 area next to Ryan Rosburg. What he does in the offseason will be key to how far he does develop in year 2. Does he get the necessary bulk needed to compete on the SEC level? Does he spend enough time learning from Kim Anderson how to play in the post at the collegiate level to be successful? Does he continue to develop his outside shot to make him a true inside-outside threat? A reasonable expectation for Jakeenan would be to take the next step in his development and follow the same path that JW3 did before him (minus the whole leaving thing) and increase his stats along at the same clip. If he can do this, Mizzou should be more successful in his sophomore year than in his freshman season. Just remember to eat Jakeenan, eat it all!

Jakeenan Gant is someone you look at and just know he has a chance to be great. Why? He has the overall athletic ability, he has length, he can block shots, he runs the floor well, he can play a stretch 4 and with time should be able to be a shooting threat, and he wants to be good. He was a raw player as a freshman, and sat out a good chunk of time before his first game vs. Xavier. Now, the big key with Jakeenan is strength! He needs to add to his frame to keep from being pushed around. He needs to fill out that jersey, and continue to develop his footwork, jump shot, and a skill set around the rim. He can get around defenders, attack the rim, and is a good free throw shooter. However, he has tendency to shy away from contact and disappear. He lost a lot of confidence at times, but did have some good games where we saw what he was capable of. He's a very important piece of the future at Missouri. He needs to be on the floor, he needs to be productive, and he needs to be a lead by example type of guy. A lot will be asked of him going forward, and he has the tools and skill set to be a great player. Again, all about the off-season and how this guy works. It's also not just about physical skill sets, but also mental with Jakeenan. He needs to move on to the next play if he makes a mistake, or gets subbed out. Forget about it, move on, and do something positive the next possession. He's a face up 4 man, but could drastically improve if he could knock down 17 foot jump shots, and stretch his range out behind the arc. Future is bright for Jakeenan, but he needs to take that step as a sophomore.

When you watch Gant run, shoot and jump you easily fall in love with his ceiling. There's a reason he was a top 50 player in his class. But that learning curve in a physical and athletic league like the SEC was long. Where the other players are almost as athletic, but twice as strong. There's no doubt that Jakeenan is elite in his athleticism. He has a soft shooting touch out to 20 feet, and with more work will be a really really good shooter. But he's got a lot of work to do. His inability to defend on the block was a big detriment to him getting the kind of playing time he wanted. But he stuck with it and it sounds like he'll be back, which is a good thing with J3 on his way out. If anything J3 might have been an even bigger deterrent to his playing time, because MIzzou struggled to rebound with J3 and Gant in the game at the same time, especially with J3 being drawn away from the basket to take more shots. So with nobody blocking minutes at the stretch four, it'll be easy to get Gant the minutes next season to let him grow even further as a player. That will help Mizzou and Gant in solidifying him as a building block moving forward.

Gant's another example of how snakebit this season was.  Mr. Georgia Basketball...sits out for 9 games for unknown reasons, impermissible benefits...blah blah blah.  He's got all the athleticism in the world, plays hard, and has a talent for the rim-rattling, party starting dunk.  His block and dunk combo was probably my favorite play of the entire season (not that that's saying a whole lot).  If he builds some strength and learns to both get pushed around less and use his athleticism to his advantage against slower big men, he's going to be one hell of a basketball player.  If he irons out his jump shot and can force those same slower big men to step out and defend him away from the basket, he's going to be that much better.  But this year, he was a freshman.  Too skinny, sometimes exciting, other times suspended, but mostly a freshman.