Now that the season has wrapped up, we're reviewing Mizzou hoops player by player. Today it's Montaque Gill-Caesar. 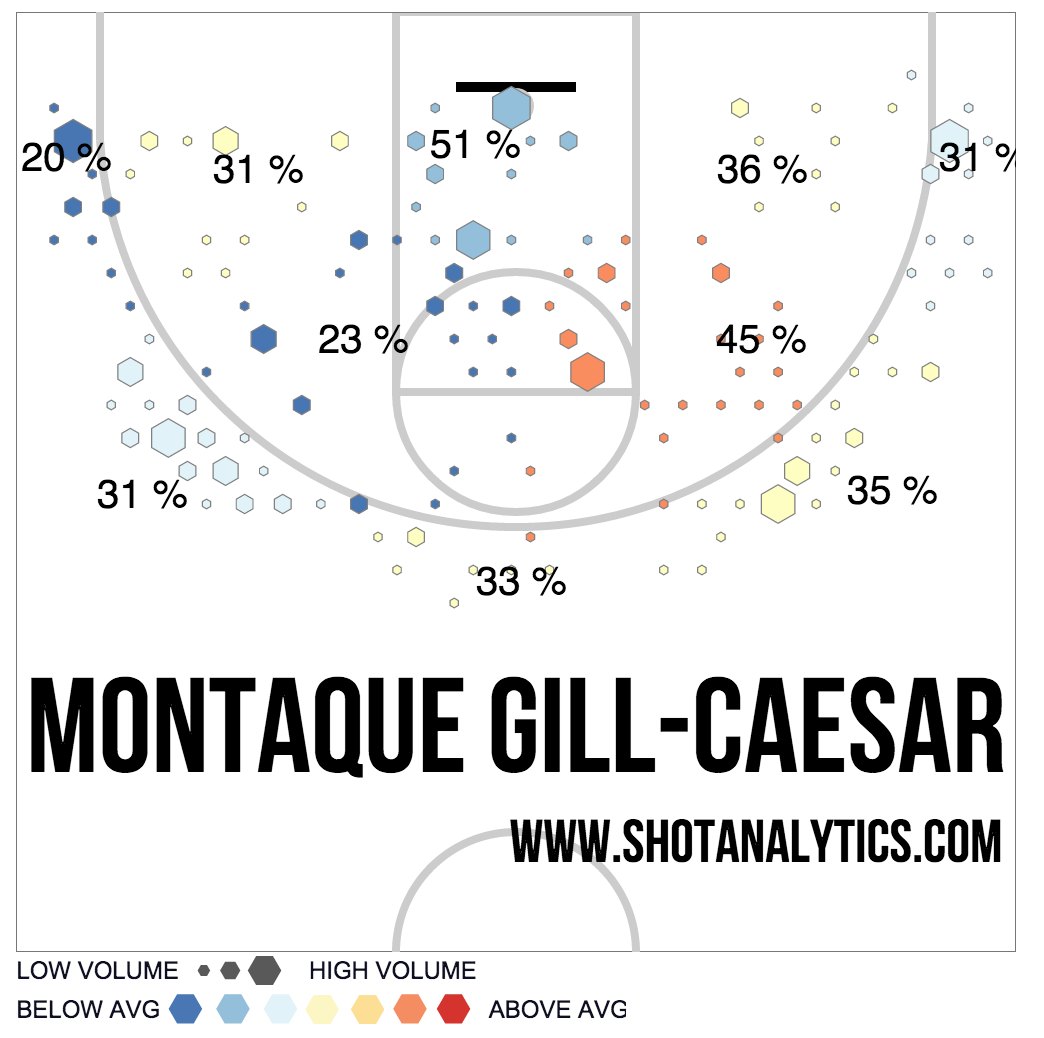 Some of the biggest, and probably most unreasonable, expectations this season were heaped onto the back of Montaque Gill-Caesar. Teki came out of the gate and established himself as Mizzou's go-to perimeter player by being about the only reliable option until a back injury against Illinois derailed his season a bit. After the injury Teki became a bit complacent on the perimeter, settling for jumpshots instead of attacking the defense, and became an afterthought offensively for a large portion of the conference season. But he is going to have to be a major player if this program is going to take a step forward next year and compete for the post season. 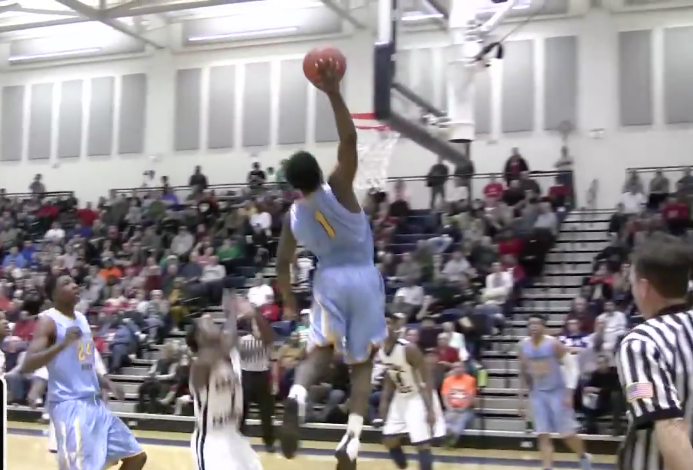 He has the ability to be the guy, but he's still a late re-classifier, so having high expectations from the outset might be putting an unfair burden on him. I would love for MGC to take the mantle as the top scorer on the wing from the outset, but I prefer to temper the expectations for him upfront and just hope that he can win the starting job and by the end of the season be a high impact type of guy.

Montaque Gill-Caesar Player Preview - RockMNation.com
Kentucky has made a living of highly rated freshmen who take them to Final Fours, while Duke and Kansas have largely done the same. The difference between Karl-Anthony Towns and Montaque Gill-Caesar is wide.

Expectations of freshmen these days are often blown out of proportion thanks in large part to the success of some freshmen in the one and done era. Kentucky has made a living of highly rated freshmen who take them to Final Fours, while Duke and Kansas have largely done the same. The difference between Karl-Anthony Towns and Montaque Gill-Caesar is wide. Towns would have been a first round draft pick had he been able to enter the draft a year ago, MGC has the ability to eventually be a pro, maybe even in the NBA. He's got a body that can be made into an NBA wing, but his game needs work. Teki managed to average nearly 2 turnovers a game for a turnover rate of 20.4, which for a wing is pretty high.

Montaque is a physical wing with the potential to be a go-to type scorer for the Tigers, but he wasn't quite ready for that mantle this season (seems to be an echoing thought on the season -- not ready). But shooting 26 more 3 pointers than Free Throws isn't the recipe for success that Teki needs moving forward, he's a very good free throw shooter with a body that can absorb contact, he's just got to get better at drawing contact. Mild changes to his game also seemed to happen once he suffered the back injury before conference play, but even then it felt that he was settling for jump shots before driving to the rim.

Still, through the late season struggles Gill-Caesar was able to finish third on the team in points per game average at 9.1. It was the most points averaged by a freshman since Keon Lawrence averaged 9.7 as a freshmen in 2007. So despite a disappointing finish, and a dismal season, Teki was something of a bright spot... even if it were only sporadically. With his style of play, I'd like to see him approach the kind of free throw numbers that J3 put up this year at almost 6 attempts per game. Perhaps a good comparison for Teki would be the attacking style of play that LeBryan Nash played with. Nash, as a senior, shot 211 free throws and averaged 6.8 fouls drawn per 40 minutes.

It's not hard to see him get there and as soon as next year. As it was he averaged 4.1 fouls drawn per 40 minutes, so with only 3 fouls more per 40 he's exceeded Nash territory. He's just got to attack more. Like most of the young roster, an offseason spent getting stronger will help Teki get the confidence he needs to stop avoiding contact on drives, and instead absorb it and still convert the shot. Around 40% of the shots he took this past year were from the 3-point line, if that number drops to about 25 or 30%, you could easily see Teki's numbers improve dramatically next season.

When you look at the future of Missouri basketball, Teki has to be the face of it, along with Jakeenan Gant, Namon Wright and Wes Clark. Gant and MGC have the highest ceilings as players, and this program will only go as far as those players are able to take it. If we're talking about Teki next season scoring about 13-14 points per game, upping his rebound totals and hitting the metrics we noted above, I think there is a good chance to believe this team is in a discussion for post season play. Maybe not the NCAA tournament, but they need to focus on being competitive in the SEC before they plan on making that leap. And a more dynamic game from Teki Gill-Caesar is just the ticket for Mizzou to get that team.

When I received the news that Montaque Gill-Caesar was committing to Missouri, I was excited as I have been about a freshman recruit since Phil Pressey signed on. You're talking about a player that comes from Rob Fulford and Huntington Prep who has produced some top level recruits (Wiggins, Bennett, Dieng, etc.). When I called the season opener against UMKC back in November, I would've told you that Teki was going to be our best player, our most productive player, our most consistent shot maker, and our most electrifying player on the roster. In that game, he had 21 points and 7 rebounds, but shot the ball 23 times. The word efficient is what I would want from Teki going forward. He had plenty of moments where we saw it, and we also had moments where we didn't know what player was going to show up. Teki went through one of the most difficult shooting slumps I've seen this past year, but I admired that it didn't keep him from trying to shoot out of it. As a freshman, and on a team that struggled to score and lacked depth, he had to continue to shoot and be aggressive. Teki would benefit from watching Marcus Denmon game tape on repeat this summer. I would love to see him become a bulldog next year, no emotion, just playing the game hard, aggressively, and confidently. He has all the ability to be able to take over a game, but he does need to become more consistent. Every player we have needs to, but Teki is the most important piece of this team from a talent standpoint next season. He has the "it" factor. He was a 4x talent, and a lot of hype and expectation came with him to Columbia. This year he regressed, and I know his back injury had something to do with that. He's a talented kid, someone I am still very excited about, and I hope he can take on a different role next year and be what he is capable of being. He had 13 double figure games, and didn't play in 5 games. If he wants to become a pro, he has to be able to develop on his athleticism and god given ability. It is there, it's in him, he just can't hold himself back.

When Teki re-classified for the 2014 class, Mizzou fans got over the moon excited about his potential and what he could do for this team. Coming into the Illinois game Teki was putting together a nice little season, sure there were some hiccups, but all in all he was contributing at a clip probably higher than most expected...and then he got destroyed. He would then miss three games due to the injury and two to suspension and he wasn't able to get back on track. The Teki we saw pre injury and post injury seemed to be two different players. He ceased driving to the rim and seemed to play timidly, afraid he'd get hurt again. Next year, Teki is going to have to come into his own and be the scorer Mizzou needs him to be, because if and Namon Wright can provide a real outside threat that opens up the middle for Mizzou, the team can only benefit. Go to the basket with confidence young man, take the contact, play through it and finish at the rim.

Teki started the season off on a tear - he scored a lot of points in nonconference play, even if he didn't do it in very efficient fashion. Then he got hurt on a flagrant foul against Illinois (that guy should have had to sit out every game Teki missed...but I digress), and he struggled with aggressiveness. Teki's a guy who's probably been one of the most athletic guys on the court for his entire life, and that's no longer the case in college ball. What he needs more than anything is some time to learn what advantages he does possess on a college court, and then to develop the assertiveness to force opposing players to defend them. Put another way: be the hammer, not the nail, Teki.