Now that the season has wrapped up, we're reviewing Mizzou hoops player by player. Today it's Namon Wright. 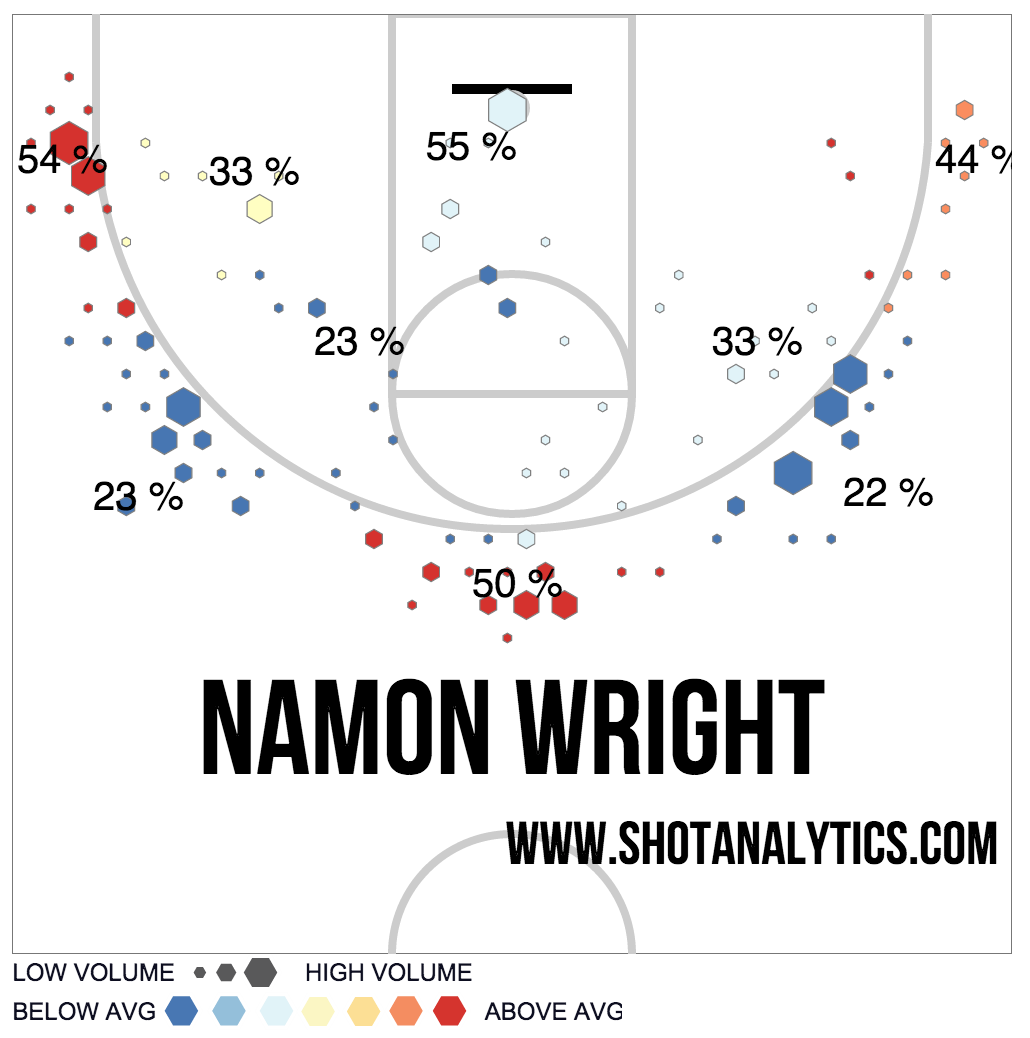 Let's talk about the third member of the freshman trio that got all of our hopes up before this season started: Namon Wright.  Namon is a 6'5" shooting guard from Los Angeles, California, who came to Mizzou thanks to a 4-star rating, an initial recruiting effort by Frank Haith, and a re-recruiting effort by Kim Anderson.  Namon, you'll recall, was given a release from his commitment so he could explore his options, but wound up re-committing to Mizzou.  He brought a college-ready body, high-volume scoring mindset, and an inconsistent jump shot with him.

What I'd like to see from Wright is an effectiveness with knocking down open jump shots, since that has been one of the areas of concern about his game to this point.

Once he got here, Namon initially fell behind Montaque Gill-Caesar in the pecking order, as Teki rode a starting role to being the team's leading scorer in the early running.  Namon nonetheless showed some scoring ability off the bench in a 21-point game against Chaminade (in which he went 7-for-7 from the field), and in a 12-point effort against a tough Oklahoma squad (where he still managed a respectable 5-for-8).

Once Teki got hurt, Namon took on greater responsibility on the roster.  He contributed a couple solid efforts in early conference play, but mostly struggled to find ways to contribute on the court when he wasn't scoring.  And his double-digit efforts, like the other freshman, were bookended around a lot of single-digit games that saw him taking and missing a lot of shots.  Then he got suspended for the A&M and @SC games following a 2-for-10 performance against Alabama (and an undisclosed violation of team rules).  He came back to play 3 lackluster games against Mississippi State, Arkansas, and Vandy, and one couldn't help but wonder if this was the beginning of the end of Namon Wright's Missouri career.  Then, something wonderful happened.

Namon went absolutely berserk against the Florida Gators.  After a season of mostly low-efficiency scoring, Namon found his jump shot.  And, after a season where it didn't seem to matter who got the ball, suddenly Mizzou had a guy who could straight up score. Kim Anderson and company drew up play after play after play to get him the ball, and he carried the team to its first win in way, way too many games.

He seemed to realize that his success didn't happen because his jump shot was infallible; it happened because he worked hard and his teammates set him up to take successful shots.

I won't lie, as much as I enjoyed the Florida game, I worried that a high-volume guy like Namon would take the wrong message away from the game and start jacking up poorly-conceived jump shot after poorly-conceived jumpshot (I may have post-Gilbert stress disorder).  I started watching him closely to see how he'd respond, and I couldn't have been more pleased.  He seemed to realize that his success didn't happen because his jump shot was infallible; it happened because he worked hard and his teammates set him up to take successful shots.  After the Florida game, he stepped up his defense, improved his ball-handling, and moved better than anyone on the team without the ball in his hands.  He was cutting hard to the basket, using screens aggressively, and generally looking like a guy who wanted his team to succeed, not just a guy who wanted to get his points.

The results, of course, didn't turn him into an All-Conference player, but they did boost his contributions significantly.  A guy who took too many shots en route to a lot of 2 and 4 point games suddenly was scoring 8, 10, 12 points consistently on about the same volume of shooting.  And it's worth noting that, despite stepping up his effort considerably on defense, the results were still inconsistent - he couldn't consistently slow down KT Harrell in the Auburn game, and ultimately Keith Shamburger took on defending him.  But in a season where it was hard to see much improvement, Namon Wright provided a real, tangible increase in his level of play.  His future is bright.

As I watched the number 12 drop 28 points in late February against Florida, I had flashbacks to the 12 that was a consensus All-American back in 2012. We all remember what Marcus Denmon meant to Mizzou basketball, and the toughness he played with. Namon, as well as a lot of the freshmen, don't realize the hours, the sweat, the relentless work Marcus gave to his craft to become the great college player he was. Namon has all the tools to be a great player, but the work ethic will have to be there this off-season. When Namon made his decision to honor his commitment to Missouri when the hiring of Kim Anderson took place, I was thrilled. The first time I met Namon was last summer at Kim English's summer basketball camp. I remember Kim and I chatting following the camp, and we both were blown away with how Namon worked with the kids, his respect for everyone that worked the camp, and how his attitude and willingness to help the young kids was impressive. It showed the type if kid he was off the floor, and I appreciated that. I expected Namon and Teki to be a great 1, 2 punch for the freshmen class. I knew Jakeenan would be a big piece, but the two guards were going to be pure scorers with J3 and Wes returning. Namon had a rough start, and had a hard time getting on the floor at the beginning of the season. He looked uncomfortable, he looked like he couldn't find a rhythm, and he had a learning curve that he had to go through at the start. The game was faster, the effort level had to be there every night, and he had to adjust his approach. Namon thought too much at the beginning, he didn't want to make a mistake and it effected his play. By the end of the season, Namon was playing with a ton of confidence, shot the ball at a high level, and was drawing double teams from teams. He's a player that has a bright future, and is a player that is an important piece in the direction of where the program is going. Namon, like all our freshmen, needs to get stronger, work on becoming an all around player, work on his ball handling, and become a more efficient shooter and scorer. Consistency is so important for many of these players, and I think Namon has to be a go-to guy going forward for this team. I'd also love to see him grasp a leadership role, but that starts with buying in and believing in the process.

Of all the freshmen on this year's team Namon had a season where you could actually look from game one to game thirty two and see progress in all facets of his game. He showed multiple times that he can be a volume scorer and with an offseason to work on getting a bit more accurate with his shot could be the scorer that Mizzou so desperately needed this season. Like his fellow freshmen Namon had a suspension issue and his times of inconsistency, but at the end of the season of his comrades he appeared to be the most complete and already in the midst of taking the next step, whether that was becoming a true scoring threat, a presence on the boards or a calming influence on the floor, Namon showed progress that no one else did. This offseason I'm hopeful that Namon will spend his time bulking up and getting stronger so he can add an element of driving to the hoop to his game to compliment his jump shot, because Mizzou is going to need a scorer next season, and Namon might be the Wright guy for the job...I know, it was there though.

Namon is a guy that I was really excited about coming into the year. He's an efficient scorer and high percentage shooter and somebody who I thought could make an immediate impact because of his ability to just score the ball. But the progress on the other end of the court, and the level of effort that he had to play with was a bit of a longer learning curve. By the end of the year you could see it all clicking in his head, and that's a good sign for Mizzou basketball moving forward. Like most of the roster Wright can also benefit from spending time in the weight room, and getting stronger will help him get better at finishing with contact around the rim which was a big deficiency all year. Down the stretch run, Wright consistently played more than 30 minutes a game, which isn't where you want a freshmen to be, but he improved his efficiency, improved his rebounding and worked hard defensively. There's no doubt that he started the upward ascension of his own game, which hopefully will help Mizzou boost their own profile. If there is one easy path forward for this team, it's with the guys already on the roster getting better and moving this program in a positive direction. It starts with Namon Wright.