The season is done, and for our next two post season recaps, their college careers are done...Keanau Post, come on down! 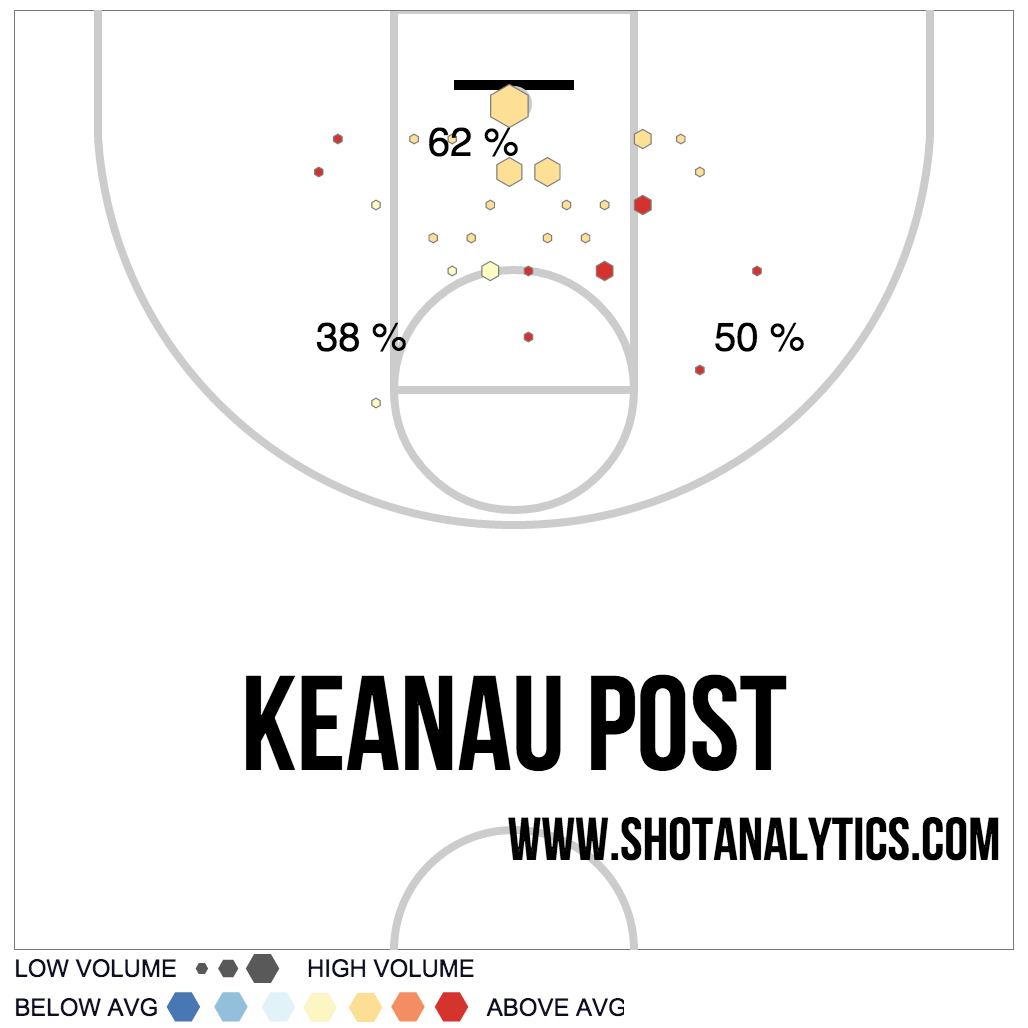 Keanau Post was one of the few holdovers from the Frank Haith regime, coming in last year with much fanfare out of Southwestern Illinois Community College in an effort to fill the hole in the center of the court. During his junior year at Mizzou we got flashes of good Keanau, aggressive Keanau, dunking Keanau and the hope was that with an offseason under the tutelage of former big man Kim Anderson, this year would be a breakout year for KP and that breakout year would lead to more success for Mizzou. Alas, that was not to be... 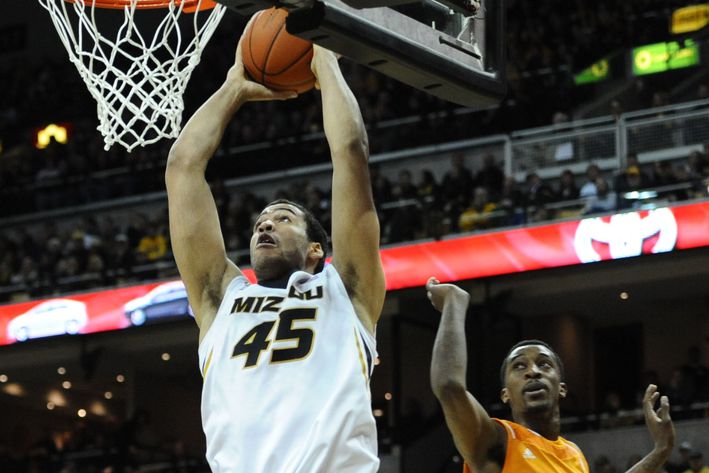 He has all the ability in the world, but he's also a late bloomer who is still fairly new to basketball. So its a little unfair to expect a whole lot from him, yet at the same time not be surprised if he ends up in the NBA at some point.

Keanau Post Preview - RockMNation.com
The biggest knock on this big man was that he was never consistent in his game, nor was he the bruising big man that Mizzou needed him to be. Too often KP was pushed around and never really in great position to use his size to his advantage.

The problems that KP had last year seemed to rear their head again this year, and without any kind of credible interior threat from KP the possibility for overall success just wasn't there. The biggest knock on this big man was that he was never consistent in his game, nor was he the bruising big man that Mizzou needed him to be. Too often KP was pushed around and never really in great position to use his size to his advantage. It got so bad, that while KP wasn't suspended he was sat for two entire games, against OSU and Illinois, when having even decent KP probably could have helped out, especially at the end of both games. However that benching did cause KP to show some signs of life, showing out well against Lipscomb and LSU, and then, the Auburn game happened.

Mizzou was coming off that big LSU OT win and leading Auburn for much of the game down in Alabama when KP had the ball stolen from him, and in an effort to make a play on the other end of the floor was called for a flagrant one on pretenaturally offended Cinmeon Bowers. Now, had KP not been such a large man and potentially more in control of his body, the call would have been merely a foul, but it wasn't and KP was sat for the rest of the game. At the time KP was having himself a nice little game, getting boards and putting up points, pretty much taking advantage of the size he had on the smaller Auburn post men, but herein lies the problem that KP had in his two years at Mizzou, he was inconsistent. He couldn't be counted on to bring it every night, and Kim Anderson apparently used this excuse to bench him as a teaching moment. Following the Auburn game, KP never really had much of an impact on the remaining games on Mizzou's schedule. I can't say that made a difference for KP, but it would have been nice to see him finish out the game and see how he handled such a moment.

Keanau also seemed to have trouble not fouling on the defensive end, he seemed to keep it together for the most part this season a little better than last year, but like Torren Jones in 2013-2014, you'd be watching the game and one minute KP would have no fouls, you'd refill your drink and all of a sudden he'd have two, ensuring that he never was really able to get in the flow of the game. What this showed was an inability to really get his feet set or move with his man without getting beat to the basket. We did have a spectacular moment when he blocked Devin Booker clear out the game, but aside from the KP seemed lost defensively.  His rebounding numbers were quite low, averaging only 3.6 a game, and for a man of his size on a team that at times couldn't hit the broad side of a barn, that's telling.

On a good team, like his fellow backcourt mate you'd have KP coming into the game for 12 - 15 minutes, he'd give you some energy plays, a big dunk here, a block there, and he'd rebound the errant shot, but on a team that had the problems Mizzou had, KP was thrust into a role he just wasn't able to fill. It's a shame KP couldn't carve out a role for himself but he didn't have the skills necessary when he got to Mizzou and didn't have the time to develop them. The success and ease he had in the JUCO level just didn't translate to the SEC where the big men are big, strong and nasty.

I really wish Post could have had another year or two in a system that relies on the big men that Kim Anderson is looking to implement, as his skills could have potentially grown and he could have been a valuable contributor outside of minutes, but unfortunately coming from the JUCO ranks, he only got his two years and in those two years he had to learn to different systems from two different coaches and never seemed to get fully comfortable.

KP arrived on campus as a JUCO All-American. In his first year, he had zero confidence. He mentally was checked out, and his attitude wasn't in the right place. He improved last season, after being almost unplayable in his first year at Missouri. He was a player that Missouri was desperate to have produce at the center position. We had J3, who was more of a stretch 4 and couldn't battle with the bigger players that the SEC brought to the table. He used his big bodied frame well this year, he learned he could post up on the block and use his strength to muscle big men, and he ran the floor hard. At one point, his mentality changed. He wanted to dunk everything, grab every rebound, and stayed out of foul trouble which was his biggest issue (especially when he received 1 illegal screen offensive foul call a game). He had good foot work for the most part, but he did miss plenty of bunnies around the rim throughout the year. He's a nice kid, and I think he genuinely liked playing for Kim Anderson who pushed him out of his comfort zone. Keanau has a chance to maybe play overseas, but it's all about how hard he wants to work and his mentality he brings to the table. He can't pick up cheap fouls, has to be consistent with his body and power, and has to be productive when he gets minutes. I agree with Kim Anderson, I do wish we could have one more year of KP to see if Coach A could help his development. We need big men, and we need size. I wish KP well, he had some great moments last year when things were looking very dark.

Keanau Post certainly had a tumultuous time in a Tiger uniform. His athletic gifts are obvious, and reports of his domination in practice were intriguiing, but we never saw the consistent big that Frank Haith and company thought they were getting when they signed Keanau a couple years ago. Kim Anderson did get him to improve enough to be serviceable, and he certainly showed more this year than he did last year. He's just a guy that you wish he would have been around longer to really get the kind of growth he's shown in limited minutes over two years.

He's got every tool you want in a big. He's got great feet, soft hands and a deft touch around the rim. The problem was between the ears. Post is a smart young man, and I've no doubt he'll succeed off the court. But I just never saw the fire he needed to play with in order to take that next step with the gifts he was given.

Keanau Post was frustrating at Mizzou.  He played on teams that desperately needed contributions from the 5 position, and he showed just enough flashes of promise to make his foul trouble and inconsistent effort frustrating.  That's not anything against him as a person or a player: by all accounts, he's a nice, smart kid who works hard in practice and is very coachable, and, as Sam said, he's got every tool you could want.  But he never developed the consistency.  Ultimately, the problem with Post was that he played timid.  I don't think he was intimidated by his opponents; rather, I think he was intimidated because he wasn't sure what he needed to do in a given situation.  When he got out of that mindset and just played instead of overthinking things, he could do good things.  But he couldn't do that consistently.  Kim Anderson tried a lot of different things to accomplish that without much success.  I will disagree with Chris about the benching at Auburn.  KP was playing okay, but he only had 4 points when he sat down.  He hadn't taken over the game.  And after getting benched, KP played hard and was basically the only bright spot in a stomping at Rupp Arena.  It was neither a high-cost move nor one that didn't provide any reward.  It just seems that way because the Auburn game was close and the Kentucky game was not.  I wish we could have another year or two of Keanau Post in a Mizzou uniform, but it was not to be.