It's time to finish up our post season player analyses, this with Keith Shamburger, he captured our hearts in just one year in Columbia. 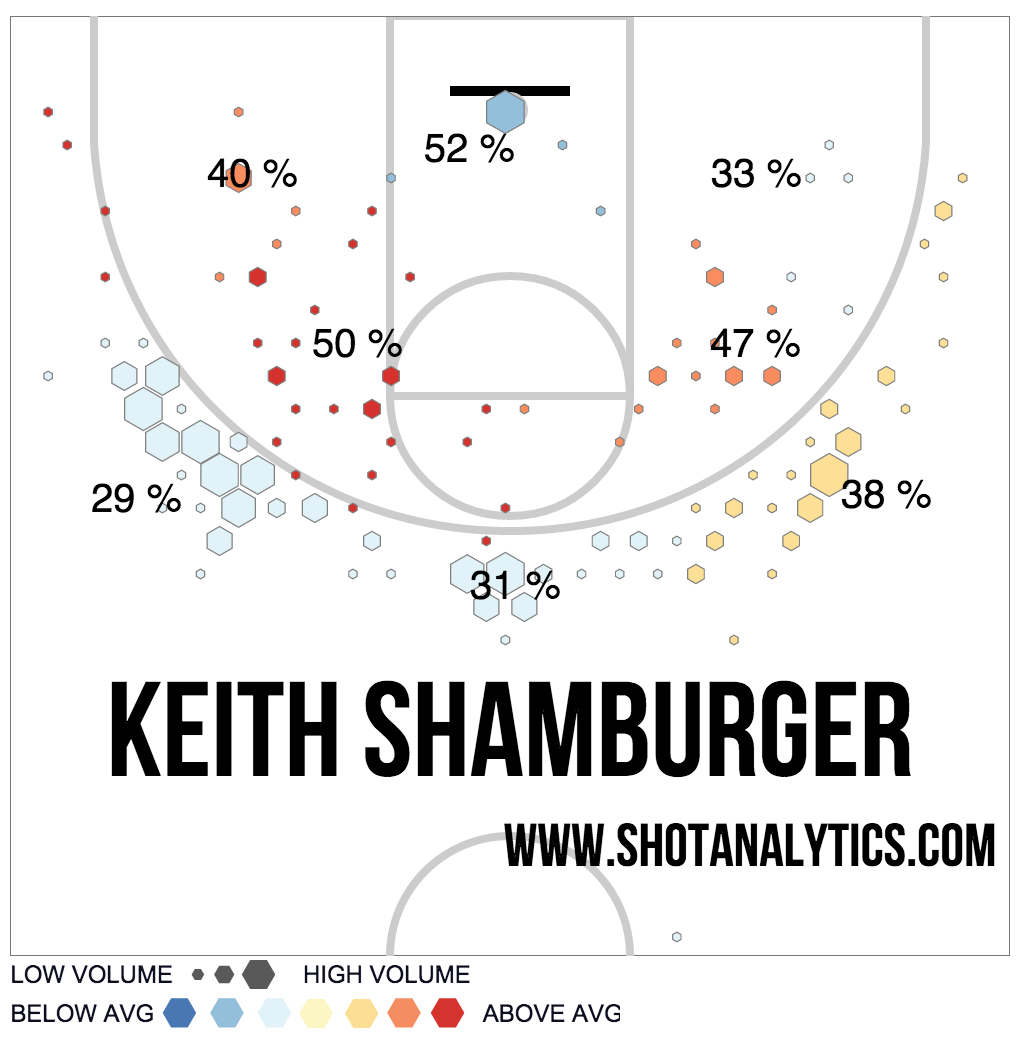 I don't think any player that I can recall has had more of an impact on a fan base in one year than Keith Shamburger had in his one year in Columbia. Perhaps it was his name that drew the fans to him, maybe that he gave credence to the belief that this team could be a potential tournament team, shunning offers from Maryland, Auburn and Tennessee, believing that Mizzou would give him the best shot at a post season run he so desired in his final year of eligibility. Or maybe it was what he did while on the floor for the Tigers, being a constant in the lineup in a season of tumult, the player the fans could count on to be there when the game tipped and with the ball in his hand when the final buzzer went off. 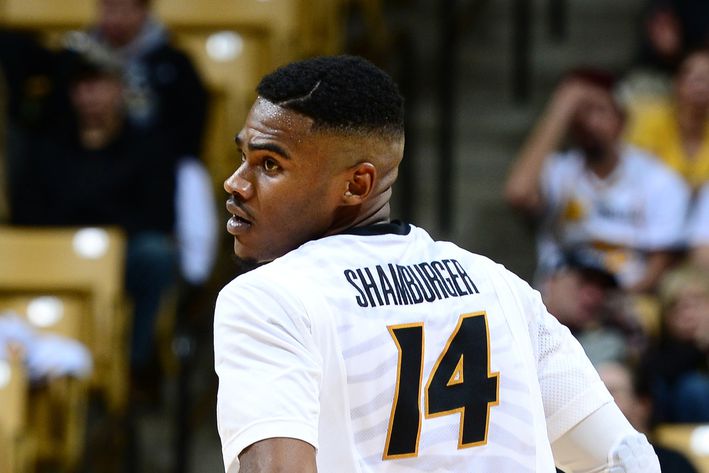 A team relying on a sophomore point guard and a couple freshman back ups is no way to run an offense, so getting Keith Shamburger onto the roster was a key move..

Keith Shamburger Preview - RockMNation.com
Looking back on Sham's numbers, only positives pop out, almost 9 PPG, 4 APG and 4 RPG on a team that averaged only 60 points on the season and 10 assists, that's startling and not near the balance you want on a team that ran 11 deep.

Shamburger came to Mizzou as a fifth year transfer to steady the point guard position that was left with only one returning player, Wes, following the departure of future NBA teammates Jordan Clarkson and Jabari Brown, and one incoming freshman, TI, capable of playing the point. Sham and Clark seemed to click pretty quickly and played off each other really well. Sham could bring the ball up the court and dish to Clark to set the offense or vice versa, providing a level of diversity that not a lot of teams had. Unfortunately the supporting cast around him just wasn't up to the task, leading for Sham to have to play in a way that perhaps was not the original plan when he stepped on campus. Pitched to be a pass first point guard presumably, once the games began Sham would have to pick up some of the scoring slack.

Looking back on Sham's numbers, only positives pop out, almost 9 PPG, 4 APG and 4 RPG on a team that averaged only 60 points on the season and 10 assists, that's startling and not near the balance you want on a team that ran 11 deep. With those numbers in mind, just imagine what could have been. I literally can't think of any deficiencies in his game this year. Perhaps he deferred too much and didn't take as many shots as we would have wanted him to, but if that's what we're criticizing him for than that's not so bad.

Sham was a victim of circumstance. On a team that lacked proven scorers he had to take on that role and at times he didn't seem as comfortable as a shoot first point guard, not nearly shooting as often as this team needed him to. The same could be said on going to the rim, especially on a team that had a lot of guys who liked to hang around the arc looking for their shot to come to them. But this is all penny ante criticism, it's not even criticism. Sham did what was asked of him and more, would we have liked to see him shoot more from the outside? Sure, but working with his supporting cast he did the best he could.

You can go through Sham's season and find highlight moments, but the Auburn game on Senior night really was something special, it had everything. A good crowd, family, a lead, things were going well. Inevitably Mizzou would lose the lead but it almost felt right, because it allowed Sham to be the hero on his night, hitting the game winner as time expired to finish his home career on the highest possible note after the season that was. It was noted by many fans that Keith's family was inundated with "Thanks" for what their boy had done this season for Mizzou, showing the best that Mizzou fans can be.

At the end of the day, Sham deserved better. Sham deserved a chance to be on a team that went to the NCAA tournament and had success in March. In that sense, I feel badly for him, but on the other hand he was the guy Mizzou needed this year; and I don't even mean his on the court production. Sham provided a steadying influence, a leader for Wes to learn from and for the freshman guards to look up to, a player that Kim Anderson could turn to when the game was in doubt, and a steadying force in a mess of a season. When we're watching Mizzou on the court next year, I think it's safe to say we're going to see evidence of what Keith did this year in our young Tigers. His sacrifice is Mizzou's gain, and maybe that's why he's so universally adored. Keith Shamburger, True Son, I think I speak for Mizzou fans everywhere when I simply say, "Thank You."

Keith was a signing that we were needing. A veteran presence in the locker room, a point guard, and a player that had led the Big West Conference in assists the year prior. I was excited for what he could bring to the backcourt. Number 1, we needed a poised presence on the floor. We also needed someone who was about team, and brought a good attitude. Keith had mentioned a big reason why he came to Missouri was when he was at Hawaii playing against Mizzou at Sprint Center the year prior. He talked about the fan base, and and getting the opportunity to play at a solidified program. I personally thanked Keith for what he brought to this team, the sacrifices he made, and giving all out effort every time he was on the floor on both ends. It's tough, because he was in a first year at a new school as well, even though he was older. He did his job, and did it well. His senior night was a memorable one, the only time his mother was able to attend a home game on the year. I sat next to the family, and they loved seeing their loved one play for the Tigers. It was a special moment for not just the family, but for Keith. He was a solid college basketball player, and did a nice job of adapting to what was needed of him. He is primarily a pass first, distribute, point guard. He had to be more aggressive, and look for his shot more with the offensive struggles we had. By the end of the year, you could see Keith's confidence growing game by game. He played with a chip on his shoulder, and did a lot of things from a production standpoint that this team was desperate for. I wish Keith the best, and hope he gets an opportunity to continue his career overseas.

I'll be completely honest here, I think Shamburger was a bit of a mixed bag. On one hand, he was a trooper who did everything he could to help shepherd this young team into a new era, and had to watch as the whole thing fell apart around him. On the other hand, Mizzou's over-reliance on Keith is part of the problem with the team this year. Before the season I thought if Shamburger was playing 15-25 minutes a game that Mizzou would be okay. Instead he was logging 30 plus minutes every night, eventually averaging 34 for the season. That's just far too many for him to be as effective as he needed to be at this level. I don't mean that to disparage Shamburger, who I thought did yeoman's work this year. Part of the problem was that the roster didn't have enough to support Keith, and limit his minutes. And in turn he ended up a bit like Ryan Rosburg, overextended.

So with that said, i want to commend Keith on a great college career that spanned 3 schools and wrapped up with a near-herculean effort against Auburn in his senior finale. Even hitting the game winner to give the young Tigers a touch of hope going into the offseason. He deserved something sweet after such a bitter year.

Keith is a guy who clearly wanted to play primarily as a facilitator, but was forced into a scoring role because of the dearth of consistent offensive options on the roster.  He did what he could, but his relatively slight stature meant he wasn't going to have a great deal of success driving the paint in the SEC.  He's got a solid but not spectacular jump shot that he had to use more than he probably would have preferred.  And he's a well above-average passer.  On a good (or even decent) team, he could have existed mostly in the background and spent his minutes making his teammates look good.  Ultimately, he's perhaps the most sympathetic victim of all this year's upheaval, because he came to Mizzou hoping to finally get a chance to play in the NCAA Tournament.  That obviously didn't happen.  All the same, he kept his head down, stayed out of trouble, and played hard for a lot of minutes every night (even more minutes once Wes Clark went down).  It's not a glorious legacy, and he probably won't be remembered as fondly as other transfers, but to do what Keith Shamburger did for Mizzou this year showed character, poise, and maturity.  Thanks for what you gave us, Keith.  Sorry we didn't have much to give back.