This is a regularly scheduled post. We were planning on doing the freshmen first, but we'll interrupt that to talk Deuce tomorrow. Until then, let's talk about DA, he's stayin! 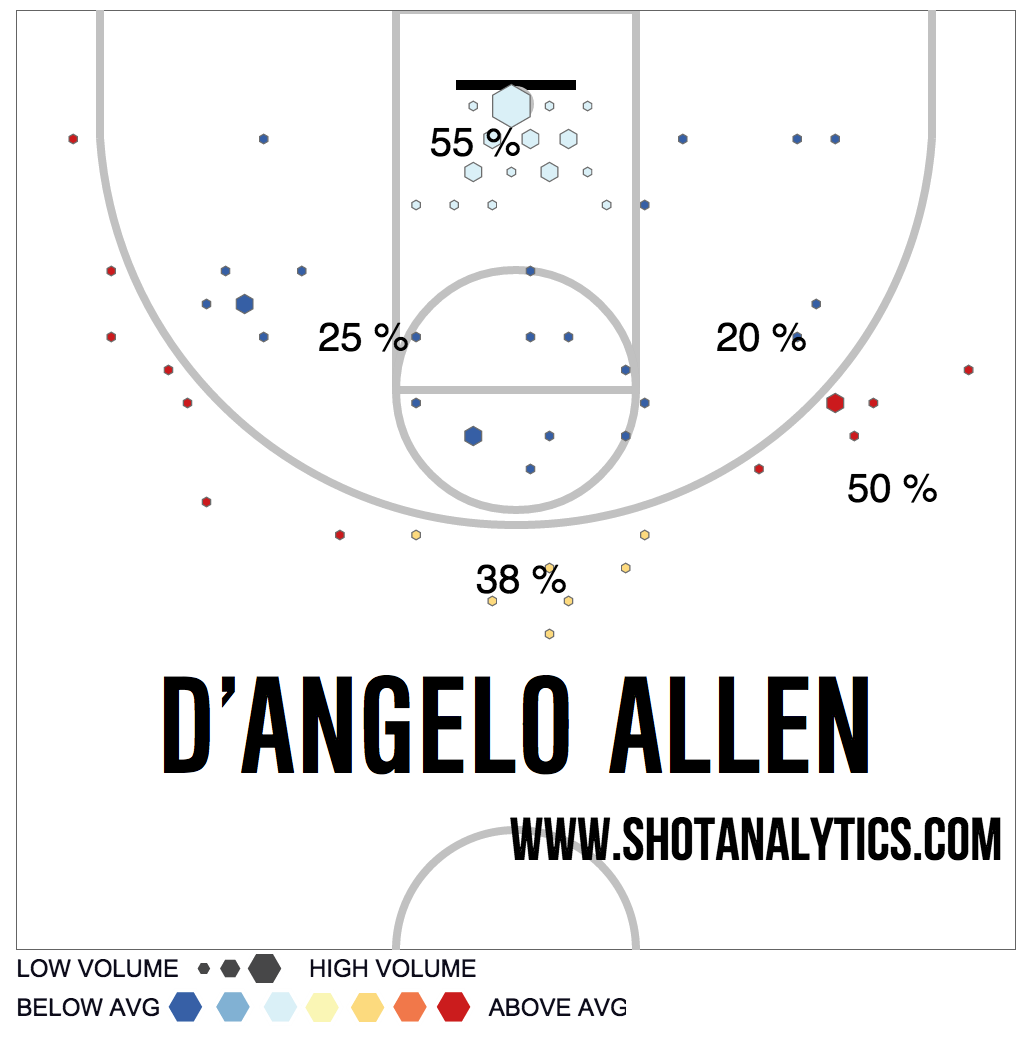 D'Angelo Allen was an interesting recruiting story.  Tim Fuller was aware of him, a guy who'd averaged about 13 PPG and 10 RPG in his senior year on a Kimball High School team that won a lot - a lot - of games (including multiple Texas state championships), and when Kim Anderson got to Columbia, he reportedly offered and signed Allen sight unseen.  And Allen is an interesting player - high energy and effort, good athleticism, and some flexibility, but clearly used to playing a supporting role on a successful team.  He started a lot of the season on the basis of his defensive effort, but, save for a few blips, was largely a nonfactor on offense.

Allen is the kind of guy that should be able to contribute something early this year, but the larger impact that you'll get from him should be in year 2, 3 and 4. This year he's going to give you energy off the bench and that's about it.
D'Angelo Allen Player Preview - RockMNation.com
That's not to disparage D'Angelo's play, of course - he's just a raw product at this point, and was unlikely to contribute much that wasn't hustle.

Not to be too congratulatory of my fellow masthead, but...yep.  Pretty much nailed it in the preview.  On a good (or even decent) team, Allen is a guy who primarily plays bench minutes to provide energy on defense.  That he started as much as he did is a symptom of how desperately undermanned the team was (particularly defensively).  That's not to disparage D'Angelo's play, of course - he's just a raw product at this point, and was unlikely to contribute much that wasn't hustle.

The frustrating thing, of course, is that Allen (like basically every other player on the team) flashed some tantalizing offensive skill in a game here and there, only to fade back into the background afterward.  He's got a pretty good jump shot - 45% from three point range is solid, even if the sample size was small - but, save for a few games like Illinois and @South Carolina, when he went 2-2 and 3-3 from beyond the arc, he seemed reluctant to use it, passing the ball off even when presented with a wide-open shot.

Allen's other big selling point is his passing ability.  He only averaged 0.7 APG, and never managed more than 2 assists in any single tilt, but some of those assists were spectacular.  No-look passes to driving guards.  Casual flips to the low post.  Allen's not a point forward (because he doesn't seem inclined to be the centerpiece of the offense), but he's a guy that should make your offense run a lot better by making your other players look very, very good.

He got a lot of starts this year because he was the freshman who figured out early on that his best way to contribute was on defense.  We heard early that he was a guy who liked to play hard on the ball, and the season bore that out.  He played both inside and out this year, and had some success defending at both places.  Being a tweener, of course, some guards were too fast for him, and he got pushed around some in the interior.  The effort is there, though, and with another year or two building craftier perimeter defense and stronger interior defense, he could become a real asset, even if he never becomes a scoring threat.

On the whole, Allen's a guy who probably played more than he should have this year because of the roster limitations.  He started a lot of games down the stretch, but my expectation is that Montaque Gill-Caesar will overtake him as starter at the 3 going forward, if for no other reason than Teki is a much more advanced offensive player than Allen is, and this team needs offense.  But what we got from D'Angelo Allen is almost exactly what we expected, and there is a lot of room for growth.

Tough. Tenacious. Blue Collar. Energy. Work Ethic. The 5 words I would use to describe D'Angelo (DA) Allen. When I watch teams throughout the season, I always look at benches to see what players are about the team. Who is that guy on the bench that wants to see his teammates excel, not just himself? You can find out a lot about a team just by body language, player emotions, and how players act around teammates and in teams huddles. D'Angelo was always the first guy standing up when a teammate would hit a shot, or a great sequence took place on the floor. He would throw his towel, flex his chest, and was more excited than anyone on the Mizzou bench. Fans appreciated the passion and effort level he brought, including myself. That is important! For a freshman, D'Angelo Allen did more than what was presented in a stat sheet. He had highs, he had lows, but he never wavered with his effort and energy level. Sure, there are offensive weaknesses right now in his game. Allen shot better from behind the arc than he did from the field, with limited attempts. The mid-range game is where D'Angelo Allen should live. Being able to pick and pop, pick and roll, or play a stretch 4 on the break is what could benefit not just D'Angelo, but this team. He's a good defender, he moves his feet well, and had great spurts this season as all the freshmen did. If D'Angelo can develop his skill set, continue to get stronger, and become an 8 to 10 point scorer on average off the bench he will be a weapon for this basketball team going forward.

I will freely admitting to always loving the freshmen on the team, something about their passion just gets to me. And D'Angelo's got passion in spades. He always seemed to be the first guy off the bench (when not playing) to welcome his teammates and he always seemed engaged, which during this season was difficult. For his play, D'Angelo got a lot of minutes especially it seemed in late game situations when Kim wanted someone bigger in the post with a bit more mobility than what was available. On the offensive side of things D'Angelo had some ups and downs. As jaeger points out he had the game against USC where he was hot from three, and then there's the missed layups that seemed to come in bunches, non more memorable than at the end of the OSU game. And Mizzou fans on this board really let him have it, which really frustrated me. Because this team had so little in the way of seasoned players, Allen like all the freshmen got major minutes and all their freshman flaws were on display, like missing gimmie layups or throwing a pass wildly to no one in particular. I think the future for D'Angelo is with him coming off the bench to spell Gant, Rosburg and any potential big that transfers in, and becoming a fan favorite that we're all really excited for on senior night in three years.

Allen is a guy whose worth will be measured over the longer term with his growth. He has an infectious flair for playing that's obvious and fun to watch, and that will carry him a long way at this level. The challenge, I think, for Allen will be figuring out how to improve his offensive arsenal enough to be an asset on the floor and not a guy that the defense can take for granted. You could probably say this about most of the freshmen, but Allen has the body and the mind to play big minutes at the D1 level. If he becomes a consistent scoring threat (and I only mean getting to 8-10 points or so) he'll be much more valuable with scorers like Namon Wright and Montaque Gill-Caesar building around him. I'd chalk his season this year up as a "pleasant surprise" because I wasn't sure what to expect going into the season. In fact I wasn't sure he was going to play much at all, until it was obvious that Mizzou was going to HAVE to play him.