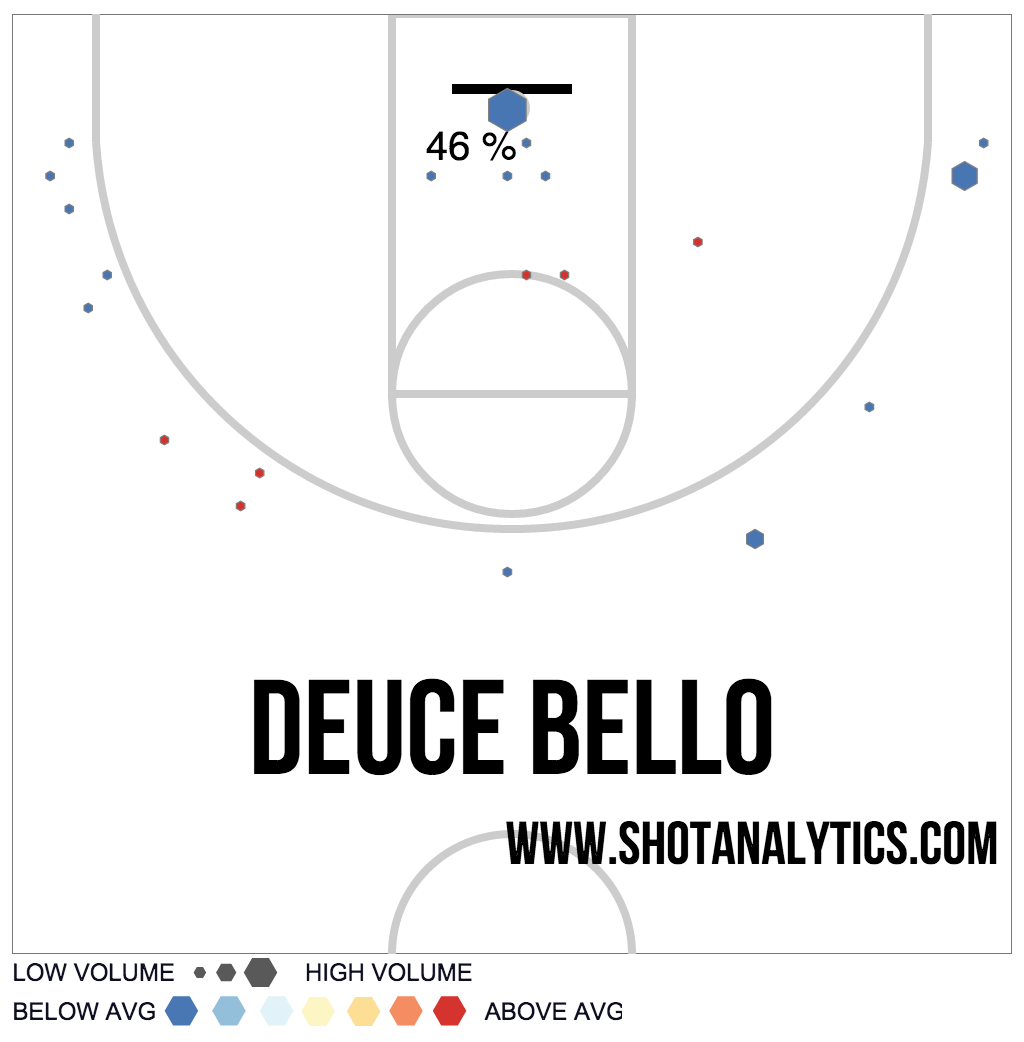 Deuce Bello is a guy that you can't help but feel a little sorry for. When Frank Haith bolted, there were several guys on the roster who were here for Haith and felt like Haith guys, Bello is one of them. He was a highly ranked recruit out of North Carolina, but after two years of never quite being able to put anything together he moved to Missouri, and the trend continued here. Bello is a phenomenal athlete, but he's yet to truly look like a basketball player on the court in three years of competition. 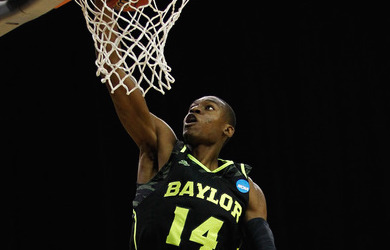 Deuce Bello Player Preview - RockMNation.com
So the one huge glaring problem with the team this year, the one area where Deuce needed to help, he just wasn't quite good enough to help.

I don't really know what anyone expected from Bello coming into the season, but his previous career numbers seem to line up almost exactly with what he produced this year. It seems reasonable to think that Bello playing for Frank Haith might have helped him develop a bit more on the offensive end, but it became increasingly hard for Kim Anderson to justify keeping Bello on the floor long because of the teams already glaring issues on the offensive end. So the one huge glaring problem with the team this year, the one area where Deuce needed to help, he just wasn't quite good enough to help.

Bello is the prime example of a player whose recruiting stars never seemed to matchup to his actual ability. He is an otherworldly athlete who just never quite turned into a good basketball player. He won the black and gold game dunk contest, and did so easily. He had a weird start to the season and actually was shooting 66.6% from three until the law of averages caught up, and he missed his next 10 shots. His deficiencies offensively are what are one of the main reasons why Bello is moving on.

There are a lot of ways that Deuce can impact a game. His explosiveness needs to be accounted for, the problem is that it just isn't enough at a power 5 level, and he didn't often find the ways to impact the game. So he ended up fouling more than he should have, shooting more than he should have, and turning the ball over a lot. So it goes without saying that when the news came up that Deuce was transferring and moving on after graduation, not many people were surprised by the news.

I feel fairly confident that the decision for Deuce to play out this year and attempt to graduate and transfer happened early in the year. I feel like both Deuce and Coach Anderson made an effort to make it work. And give credit to Deuce, he stayed engaged even when the minutes were hard to come by. You saw him jumping off the bench after made 3's and dunks, and being a good teammate. When he did get in the game, you saw him giving good effort. And he was even rewarded with a couple starts in the wake of some suspensions.

Where Deuce goes from here will be interesting. I'm sure at a lower level he could be a high impact guy because of his athleticism. But how low will he go? I can't wish nothing but the best for a guy who had bad timing and worse luck when it came to the roster breakdown. He committed to a coach and a staff that was going to develop and invest in him, and ended up with a Coach who was making a completely different roster made up of young guys. So, whatever happens from here on out, good luck Deuce. Thanks for devoting yourself to being Tiger.

I do feel for Deuce. He transferred from Baylor, sat out a year, then his head coach leaves. That is two big changes that you hope never happen when you step onto a campus. When you're recruited, you decide on the program you want to be at. Things happen, every year in college basketball is different, but to have a coaching change and a transfer year in your college career is tough. However, I was hoping for more from Deuce this past season. He's a bigger guard, who we saw at the 4 at times when Kim Anderson wanted to go small. He provided versatility, but wasn't as good of a defender as he was at Baylor. This team struggled as a whole shooting the ball and making shots, and Deuce fell into that category. Yes, it's not a strength of his and not what his game is known for. I felt that maybe a change of venue, some increased minutes, and an opportunity might change that and light a fire under him. Unfortunately that never happened. He has 1 year left, that's it. I wish him all the best to improve his game in the areas that he needs work in. He's an athlete, and has size and length, but needs to improve his skill set and become more of a weapon.

For the past year Mizzou fans have loved complaining about what Frank Haith did to Mizzou and them by proxy; and to be honest I don't buy into that. But with Frank leaving there is one person who seemed to be genuinely screwed over and that was Deuce Bello. Deuce sat for a year, then Frank left and Frank had made some references to what Deuce was going to do in his first year on the court for a Frank Haith led team, provide defense mostly, and that never came to be under Kim Anderson. The body of work with which to comment on is almost non existent, and there weren't even moments to build a recap off of. So what I can say is that if Deuce moves on, I hope he has a Shamburger level season somewhere else, where he can be a part of a team, get minutes and just get to play basketball.  Good luck in the future Deuce, we'll be watching to see how this next year plays out.

You gotta feel for a guy like Deuce Bello. All the raw talent in the world, but just can't seem to develop that talent into basketball skill. Some of that may be circumstances - he played his first two years for Scott Drew, who isn't exactly known for developing players effectively, then transferred to Mizzou, sat a year, and then, when Frank Haith left, found himself the odd man out because there was nowhere on this year's team for a defensive specialist who couldn't create. If Deuce had landed somewhere out of high school where he had a chance to ride the bench and work on his offensive game, maybe he turns into a legit D1 player. But he never really had the opportunity. I hope he uses his last year of eligibility to land somewhere (maybe D2 or a midmajor) where he can play some good ball.