Secrets of the Split T, part 3: The staples

Share All sharing options for: Secrets of the Split T, part 3: The staples

Following two fun, exciting introductory chapters, in which he shares the whys, whens, and whats of the offense he created, Don Faurot gets to work. Part II of Football: Secrets of the "Split T" Offense focuses on the nitty gritty of the offense -- the base plays, the constraints, and how you try to operate against different defensive alignments.

This post will focus on Chapter 3-5, which cover the base plays of Faurot's triple option: the handoff, the QB Keep, and the pitch-out.

On the deficit side of the ledger, the handoff is perhaps the most hazardous of "Split T" plays. Exchange of the ball in close proximity to milling linemen makes the possibility of fumbling greater than on any other play.

My initial guess would have been that the option pitch out to the halfback would be the most hazardous play, but this reasoning certainly makes sense. In 1950, the tuck-it-in-his-belly-then-take-it-away action was not nearly as familiar as it has become in the decades since. It is more of a built-in fundamental now. Plus, elsewhere in the book, Faurot talks about making basically a two-handed pitch on the pitch-out, which is both safer and more time-consuming. As defenses began to become more familiar with the option, the pitches had to get a little quicker, hence the one-handed quick flick.

By the way, those are pretty impressive per-carry averages considering the between-the-tackles nature of the handoff.

The handoff plays diagrammed should hit as fast as safe ball handling will permit. They are not strong plays if the backs hit too slowly, nor if the quarterback hands off too far behind the line of scrimmage. 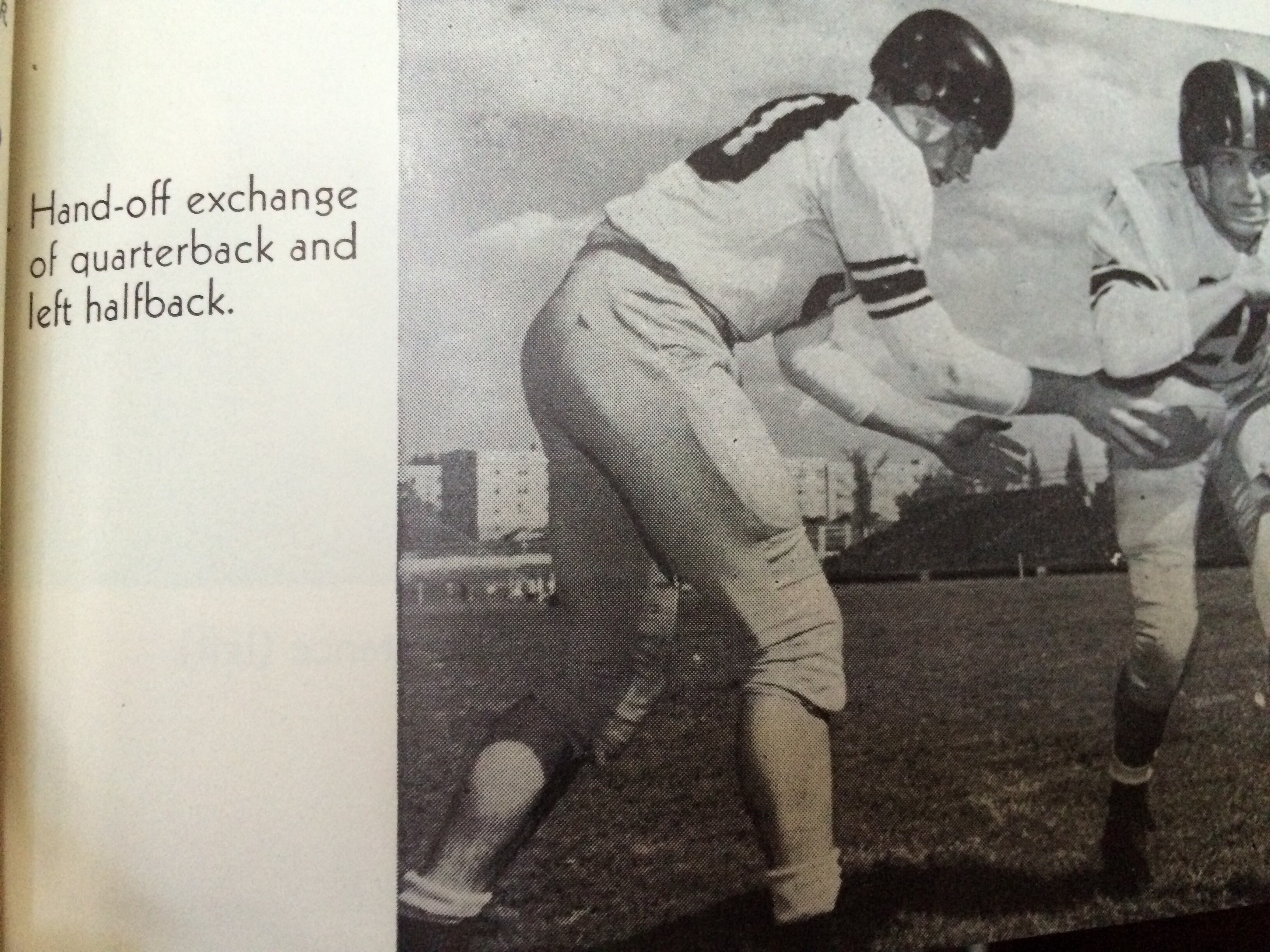 This is the fullback dive portion of the wishbone triple option we grew up with. It is designed to prevent opponents from minding the outside running lanes. Navy uses it more voraciously than most, giving its fullback 20+ carries per game sometimes to make sure that defenses eventually get flat-footed and gashed on the outside.

So many of football's greatest innovations stemmed from "Well, we lost [Player A]," or "We have three good players who do these unique things pretty well."

"The quarterback should be a heady ball handler and preferably a player who has had some basketball experience."

The only play peculiar to the "Split T" offense -- its trademark, so to speak -- is the quarterback keep play off tackle. This keep play is a very important unit because it sets up the end run and the handoff play which start in exactly the same manner. This is the play that has made the "Split T" offense particularly difficult to stop with a normal defensive alignment.

Defeating a heavily favored opponent is always one of a coach's greatest thrills, and Missouri's 20-14 upset of Matty Bell's 1948 Southern Methodist team was a memorable experience for the author. The Mustangs, with Doak Walker in the saddle, brought a sixteen-game winning streak to Columbia, Missouri that Saturday afternoon. They were favored to add another victory at our expense, but a keep play that covered sixty yards enabled the tigers to confound the experts.

The turning point came in the second half with the score tied at 7-7. The Tigers, pinned deep in their own territory, were in poor position for an all-out offensive push. At this juncture, quarterback Bus Entsminger slid off right tackle on a keep play, and his sixty-yard jaunt paved the way for a second touchdown. Our team was never headed after that, although Mr. Walker gave us anxious moments right to the finish. This was the only defeat suffered by the Cotton Bowl victors that year.

We've written about that SMU game before.

Don Faurot's return to Mizzou had seen slow growth. Mizzou went just 5-4-1 in 1946 and 6-4 in 1947, but things came together again, and starting in 1948 Mizzou made one last great run under Faurot. After the typical season-opening loss at Ohio State (for money purposes, Faurot had agreed to a series of trips to Columbus throughout the 1940s...and Mizzou went 0-8-1 up there), Mizzou caught fire, first beating SLU 60-7, then welcoming mighty SMU to town.

Why was SMU mighty? Because they had a guy named Doak Walker dominating both ends of the field. SMU was 2-0 and ranked 4th in the country when they came to Columbia, and they were welcomed by a Mizzou team playing one of its most perfect games. Walker was every bit as dominant as advertised, and SMU played well ... and Mizzou won anyway.

A record crowd of 30,892 watched SMU take a 7-0 lead in the second quarter after Walker made a leaping 25-yard grab to the Mizzou 3, then take it to the house off-tackle the next play (oh yeah, and he kicked the PAT too).

SMU led 7-0 at halftime, but Mizzou responded, with big runs from Nick Carras and Mike Ghnouly. Eventually Bus Entsminger scored, and it was 7-7.

The switch had flipped for the Mizzou offense. On their next drive, they drove to SMU's 1 before faltering, but they turned right back around and drove 69 yards for another score--Dick Braznell went in from 21 yards, and early in the fourth quarter it was 14-7 Mizzou.

Mizzou got the ball back, and with under four minutes to play Wilbur Volx scored on a 2-yard run. Despite a missed PAT, Mizzou had seemingly an insurmountable 20-7 lead.

Fifty seconds later, it was 20-14. After Walker returned the kickoff to the SMU 26, he caught a 74-yard bomb for a touchdown. SMU kicked off with 2:10 left and not only got the ball back via punt, but via poor punt. The Mustangs took over near midfield, but Loyd Brinkman stepped in front of a pass intended for Walker (seriously, I would hope they'd have had him quadruple-teamed), and Mizzou was able to run out the clock and clinch the stunning victory.

In the end, Walker was great (he did everything in the above write-up, plus he tracked Entsminger down from behind, preventing a TD on a long run), but the Mizzou rushing attack was too strong. They rushed for 356 yards, dominated the field position battle, and came away with the huge win.

Back to the book:

The offensive signal caller should be alert to call the keep play when either of two situations arises on the field. First, the play is most practical if the defensive tackle has a tendency to play tight or inside the offensive end. Second, if the defensive end has a tendency to play wide, to come across deep into the backfield, or to retreat, he is particularly vulnerable to the keep play.

Statistically, the keep play has always maintained an excellent offensive average. Our records for the play show:

Quarterback Bus Entsminger of Missouri (1947-48) and Jack Mitchell of Oklahoma (1946-47-48) have made this keep play famous. Both players were among the conference rushing leaders each year.

Again, those are pretty spectacular per-carry averages and speak to the unfamiliarity defenses were dealing with.

Mitchell, by the way, passed away in 2009, and the Daily Oklahoma did a nice series on him.

Mitchell and Bud Wilkinson were an early-day Jack Mildren and Barry Switzer. Mitchell, recruited by Jim Tatum off an Arkansas City, Kan., train station, played for Tatum in 1946, then was Wilkinson’s quarterback for two seasons. He was OU’s first option QB, a master at the famed split-T, with innovations like the pitch to the trailing halfback and the “spinner,” basically the early counter play. [...]

Mitchell said that Missouri coach Don Faurot, for whom Wilkinson coached in war-time football, always claimed to have invented the option. But Mitchell says different. The Sooners always called the play depending on the defense; if they faced a 6-2 and the ends boxed out, the quarterback would keep the ball. If the ends faced a 5-3, he would pitch.

During practice one day, the scout-team end kept backing off and backing off. So Mitchell held onto the ball and finally turned upfield. Wilkinson quizzed him why he hadn’t followed through on the pitch that was called.

“It’s just like basketball, Coach,” Mitchell said. “If you have a two-on-one and the defender comes to you, you pass it. If he doesn’t, you keep it.”

Historians credit Faurot with inventing the option in 1941, “but I never saw Missouri run the option the whole time I was at Oklahoma,” Mitchell said.

WELL YOU SHOULD HAVE WRITTEN A BOOK ABOUT IT THEN, JACK.

The success of the quarterback keep play depends on a good fake to the handoff man, the blocking of the offensive tackle and end on the side toward the play, and the ability of the quarterback to act. If the play is to be really successful, the quarterback must convince the defense that the inside handoff our the outside pitch-out is imminent. [...] The keep play, striking swiftly outside the defensive tackle, has always been of particular concern to rival coaches in their defensive planning for the "Split T" offense. It is entirely different from the off-tackle play of any other system.

Most colorful of all "Split T" plays is the pitch-out end run. The wide sweep delights the fan because of its breakaway possibilities and because the lateral pass play is daring in its execution. When the end run is in progress, others besides the ball carrier attract attention. Fans have an opportunity to watch the individual roles played by the quarterback and the fullback that give the halfback a good right-of-way.

The sentence in bold tickled me for some reason. But yeah, fans love the big plays.

To be complete, any well-balanced offense must strike wide with speed and power. A baseball pitcher must have speed, curves and change of pace. A basketball offense must have good long shooters when the defense sinks back to protect the basket. In football, a versatile offense must be able to strike effectively and successfully at any point. The handoff, keep and pitch-out sequence accomplishes this objective.

The pitch-out has won many games for Missouri. In some games we have scored around the ends, while in other contests, where ends floated, our halfbacks have taken the pitch-out and cut inside a floating end for a touchdown run. [...]

On a snow-swept field at Lincoln, Nebraska in 1948, Missouri went against Nebraska with the thermometer registering twenty-nine degrees. On that day, our first touchdown came when we covered eighty yards in five plays. Four of the plays were pitch-outs. Throughout the game end runs were vital in our 33-6 conference victory that was won under adverse playing conditions. 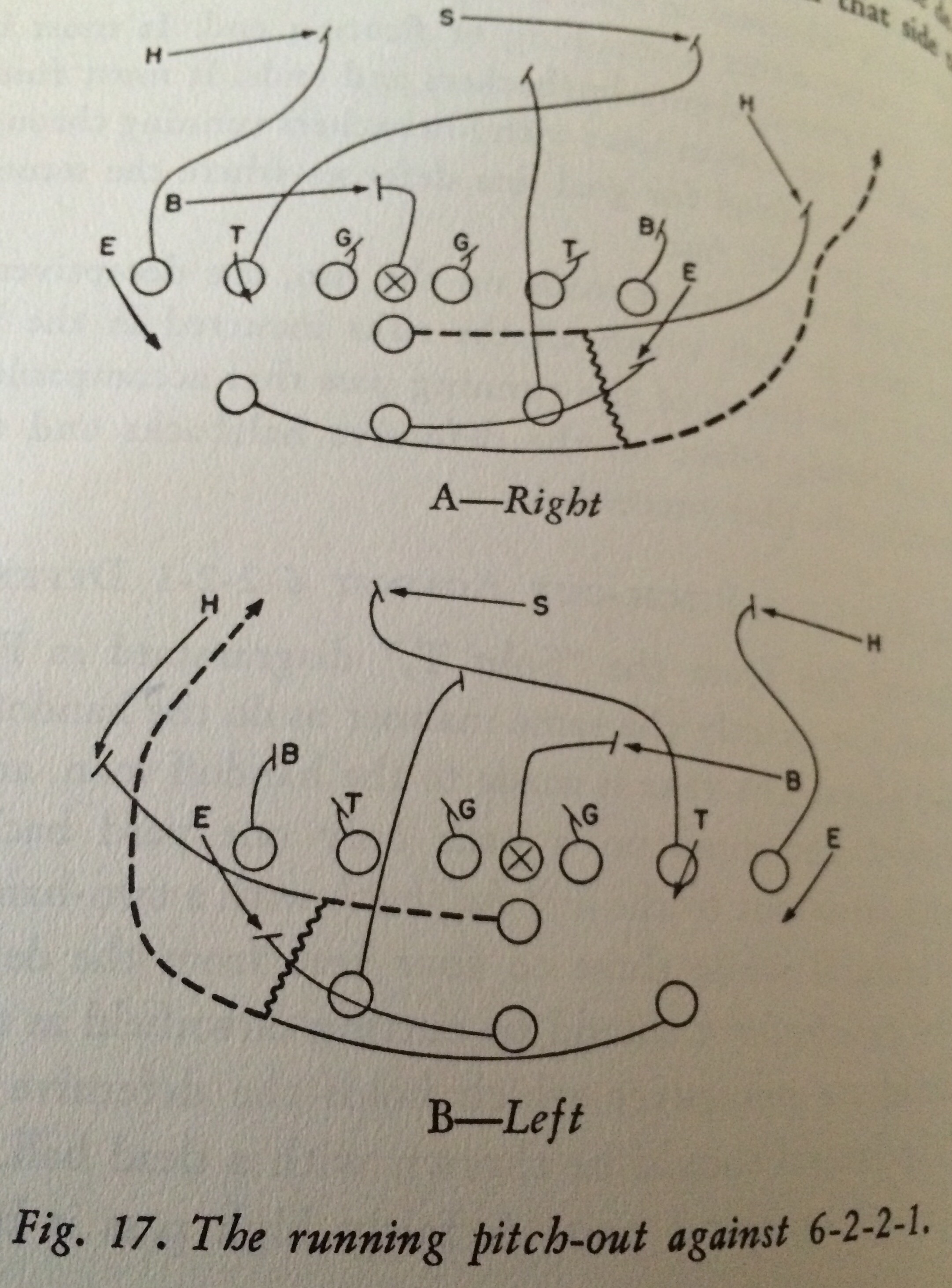 Again, football never changes. You needed both efficiency and explosiveness in 1950, just as you do in 2015. The methods for accomplishing that have changed only as defenses and the physical capabilities of the players themselves have changed.

The "Split T" quarterback starts the end run by faking the handoff play and moving laterally one yard back of the line of scrimmage. The pitch-out originates from this position. This maneuver holds the defensive end near the line of scrimmage and enables the fullback to secure outside blocking position on him. The keep play and the running pitch-out force the defensive end into a two-on-one basketball situation. The quarterback has the option of pitching the ball for the play around the end, or of keeping the ball and continuing inside. Since this action is carried out at a fast-moving pace, the end must make his decision quickly. [...]

The quarterback should be cutting downfield as the lateral is made, a maneuver which holds the defensive end in place. The lateral should be thrown with a dead ball, not an end-over-end or spiral pass. A fairly-high pass is best.

Some things have changed, I guess.

It has been the author's observation that the halfback in the "Split T" end run situation is ideally equipped if he has (1) speed, (2) passing ability (as a decoy weapon), (3) open-field know-how.