Secrets of the Split T, part 4: The constraints

Share All sharing options for: Secrets of the Split T, part 4: The constraints

If you are a Smart Football reader, you know them as constraints. They are the plays that keep a defense honest and allow you to live as close to your id as possible.

The idea is that you have certain plays that always work on the whiteboard against the defense you hope to see — the pass play that always works against Cover 3, the run play that works against the 4-3 under with out the linebackers cheating inside. Yes, it is what works on paper. But we don’t live in a perfect world: the "constraint" plays are designed to make sure you live in one that is as close as possible to the world you want, the world on the whiteboard.

Constraint plays thus work on defenders who cheat. For example, the safety might get tired of watching you break big runs up the middle, so he begins to cheat up. Now you call play-action and make him pay for his impatience. The outside linebackers cheat in for the same reason; to stop the run. Now you throw the bubble screen, run the bootleg passes to the flat, and make them pay for their impatience. Now the defensive ends begin rushing hard upfield; you trap, draw, and screen them to make them pay for getting out of position. If that defensive end played honest your tackle could block him; if he flies upfield he cannot. Constraint plays make them get back to basics. Once they get back to playing honest football, you go back to the whiteboard and beat them with your bread and butter.

"The halfback in the "Split T" end run situation is ideally equipped if he has (1) speed, (2) passing ability (as a decoy weapon), (3) open-field know-how."

Faurot and the Split T

The staples Faurot and the Split T

As sound as the Split T's base plays were on the proverbial whiteboard, and as unfamiliar as Don Faurot's system was to opponents in the 1940s, Faurot knew that life would not exist without constraints, and he spent a good portion of his book talking about them.

Every football offense has one or two plays that command the respect of the opponents. We want defensive guards and tackles to worry most about the quarterback sneak play of the "Split T" formation. We must use it often enough to make the opponents conscious of its striking power, thereby reducing the effectiveness of their defense against wide plays. The sneak, although never a long gainer, has always made steady yardage for us. Its three-year average is 2.7 yards for ninety-two tries. [...]

The sneak must be used as a check play to keep the defense's guards in position. It should gain consistently when unorthodox defenses are employed to stop the basic plays of the "Split T" that were described in the three preceding chapters. [...]

The importance of the sneak cannot be underestimated in its relation to the basic plays of the "Split T" offense. It provides a quick threat through the middle, and its use sets up better blocking angles for wide plays.

The modern flexbone offense is built around the same principles of keeping defenses honest in the middle to make the wide plays as successful as possible. Quarterbacks and fullbacks will peck away at three to five yards per carry so the slotbacks can average about seven or eight. 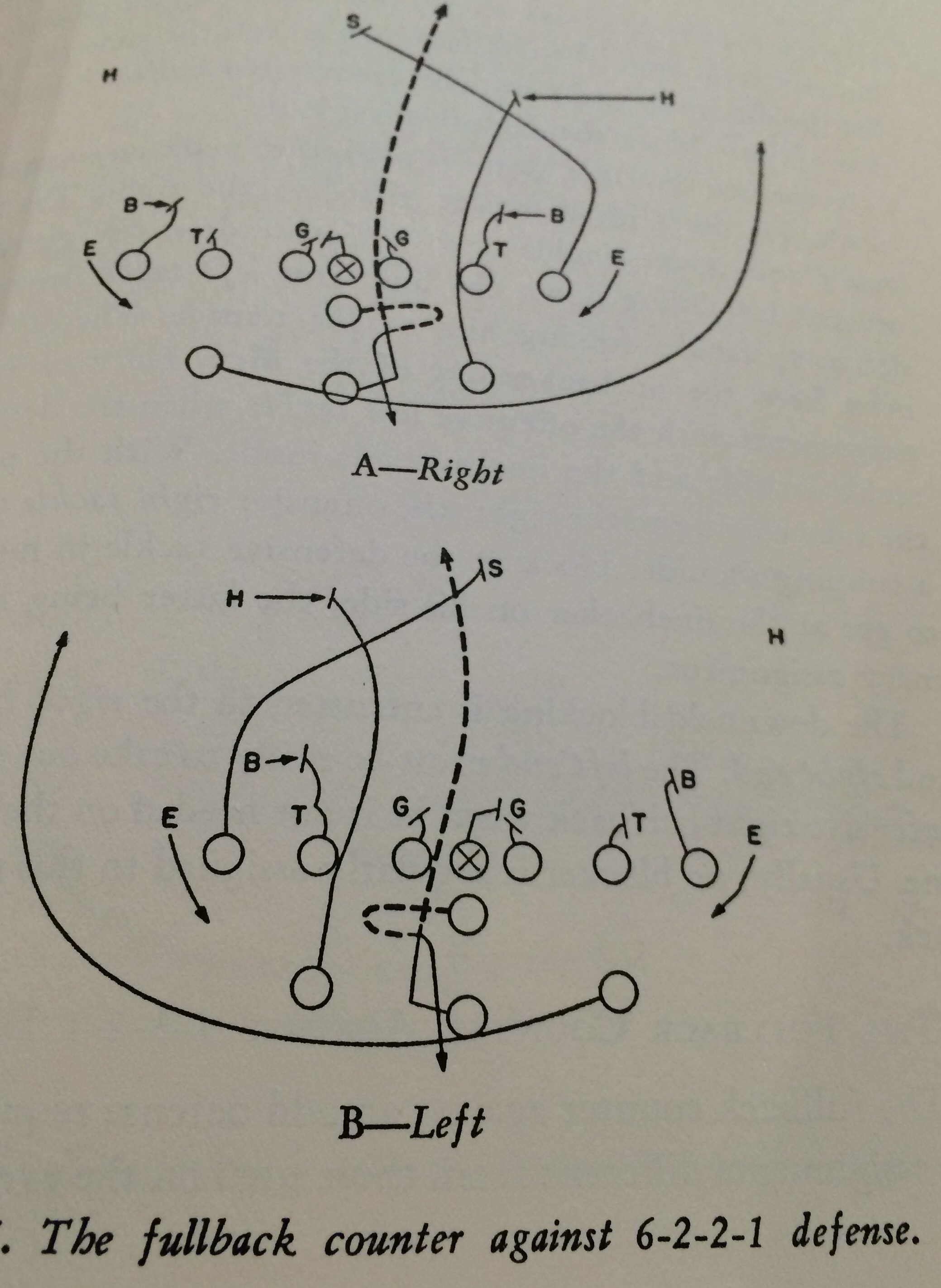 The success of the Fullback Counter, like that of the sneak, is not measured in terms of its offensive average. This is true in spite of the fact that the play has averaged a commendable 4.7 yards at Missouri over a three-year period.

The fullback counter is utilized as a check play to "freeze" the defense and give the basic series more latitude. The play often results in long yardage, especially when a fast, hefty fullback shakes himself loose in the secondary.

In contrast to the sneak, the counter play is not recommended for short yardage or for goal-line thrusts because of the delay element involved. Delayed plays are usually duck soup for the fast, converging line usually encountered near the goal. Faster-hitting straight plays or wide sweeps are the answer to tight defenses. [...]

The quarterback takes two steps to the right and fakes a handoff to the right halfback. He then pivots quickly on his left foot and gives the ball to the fullback. The fullback starts the play by taking a long step to the right and lowering his head and shoulders so that he will be partially concealed behind the line.

This just sounds like a fumble or muffed exchange waiting to happen, but if executed properly, it certainly sounds like a nice play to assure defenses are still protecting the middle of the field.

Some coaches have defended against the "Split T" with wide tackles and floating ends; in such cases, the fullback power play has been pressed into service to crack this defense.

This play hits a little slower than the straight handoff and contains a fake into the line by the halfback. Our cross-blocking on this play varies slightly from the straight-ahead block of the basic series. [...]

This play proved its worth in our offense against the University of Illinois at Champaign in 1949. Coach Roy Elliot's Illinois line had been looping again and again with disconcerting success. With the score tied at 20-all in the fourth quarter our fullback, Win Carter, was repeatedly called on this play during the payoff drive that brought a 27-20 win.

The fullback power play averaged 4.6 yards on forty carries in 1949. This was its first season of extensive use in our offense.

The Savitar has more about that game.

An inspired Missouri Tiger turned a trick it had been unable to pull in 22 years this afternoon when they beat a member of the Big Ten conference. Victim of the Tigers' feat was previously unbeaten Illinois, who bowed before the Terror of the Midlands 27-20.

It took the visitors only one play to set the pattern for victory. On their first play from scrimmage, Missouri halfback Johnny Glorioso shot through an opening in the line and raced 51 yards to paydirt. Four minutes later, the Tigers added another one by sending Dick Braznell over from the 1-yard line as the capper of a 45-yard march. Glorioso, who had made his first conversion good, missed the kick on this one--his only mistake of the day. [...]

After Illinois had tied the game at 20-20 in the third quarter, Missouri poured on the power to put the game on ice. Sturdy Win Carter climaxed a 65-yard sustained drive by plunging over from the 3. Glorioso's conversion left the score at 27 for Missouri, 20 for Illinois. 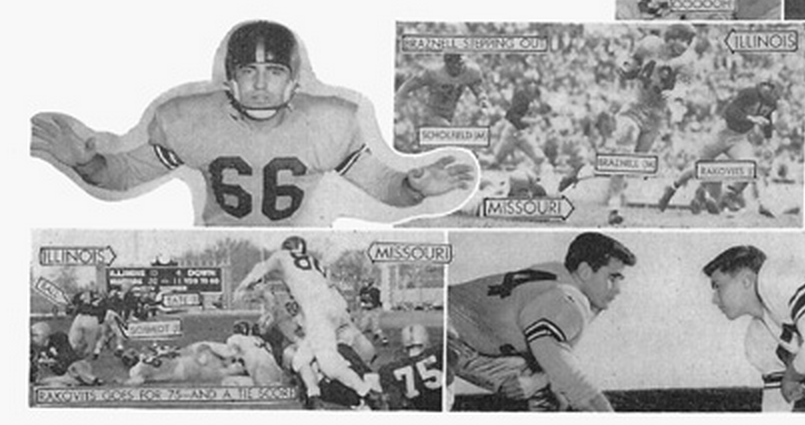 The Criss-cross and Reverse Play

The Criss-cross play, once called the old Split Buck on the "T" formation, was used over forty years ago. The reverse play is brand new in the "Split T" offense and fits into the basic series of this system. Both types of plays are included in our offense for the same reason, namely, to outsmart the linebackers or linemen reacting too quickly to the first move of the offense. In the criss-cross play, the fake is first made to two different backs, with the third backfield man carrying the ball in the opposite direction. [...]

These plays are not particularly powerful when the defense stands its ground and is not taken in by the fakes, but under these circumstances the basic ground game should be clicking. When the defense is running with the play and disrupting the basic series, the reverses and criss-crosses should gain considerable ground and should occasionally break through for scores. [...]

My crowning achievement in my intramural flag football career was designing a perfect reverse. Our quarterback really liked running the option, which isn't amazingly effective in flag football, but after a couple of decent games, I lined up wide to the right, and as the option was coming toward me, I took the handoff, rolled left, and hit a wide-open guy for a touchdown. I got cocky and took some QB snaps the next year, which very quickly ruined my career 100 percent completion rate.

The Trap Play maintains its place in the "Split T" offense because of its devastating effect on hard-charging tackles and guards. The mechanics of the "mouse trap" are simple. Over-eager defensive forwards are allowed to penetrate across the scrimmage line and then are blocked from the side by pulling linemen.

Traps are necessary safeguards in a well-rounded offense. They often pay off when orthodox blocking tactics fail, and the presence of one or two trap plays not only appreciably strengthens the passing offense but also helps the overland game. Few are hardy linemen who will rush the passer recklessly after absorbing several "broadside" blocks. [...]

The trap differs from the counter and reverse plays in that the play first fakes wide but then hits inside in the same direction. It also strikes more swiftly than the delayed-hitting reverse or criss-cross plays.

I just want to take a minute here to marvel at the wording. If I don't attempt to use "duck soup," "defensive forwards," "overland," and "broadside" in my writing in the coming months, I have failed all of you and myself.

These five plays are designed to smack a defense in the face the moment it thinks it has everything figured out. You can see how play-calling and timing could be very important here; a lot of the plays are designed to adjust for when a defense is doing something right, and a good defensive coach will know to start expecting these changes of pace pretty easily. If your defender is slicing through the line, you suspect a trap will come. If the pursuit is too strong on the wide plays, suspect a reverse. Of course, a coach suspecting it and players being ready for it are two different things...