Secrets of the Split T, part 5: In which Don Faurot stretches the Split T into a spread

Share All sharing options for: Secrets of the Split T, part 5: In which Don Faurot stretches the Split T into a spread

With the base plays and primary constraints outlined, it's time to get creative. In chapters 11-12 of Secrets of the "Split T" Formation, Don Faurot starts to talk about the possibilities. Chapter 11 looks at the personal touches other coaches have put on their own respective versions of the Split T. Chapter 12 starts spreading the defense out.

The constraints that kept defenses flat-footed.

Faurot and the Split T.

The keep-you-honest plays The entire series

The Offshoots of the Basic Formation

Most coaches of the "Split T" school have developed a few pet plays of their own that have proved to be productive. These offshoot plays have added individuality and variety to their offense. Many of the ideas for these plays are traceable to the older single wing, double wing or short punt systems. They have simply been adapted to the position of the backs and linemen in a modern "T" formation.

Throughout the book, Faurot expresses great admiration for Oklahoma head coach Bud Wilkinson. It's not hard to see why. Wilkinson was the most successful adopter of the Split T -- it would be a stretch to call Wilkinson a Faurot protege, but ... then again, this is the sport where you can claim any national title you want (especially if you're Auburn), so BUD WILKINSON WAS DON FAUROT'S PROTEGE -- combining it with his own great coaching mind to rip off 11 consecutive top-10 finishes from 1948-58 and, at one point in the 1950s, win 47 consecutive games. In this chapter, Faurot specifically references a few of the ways Wilkinson made the Split T his own.

Here's a summary of some of the specialty plays he mentions:

Oklahoma's Quarterback Spinner Play. Quarterback [Jack] Mitchell stepped back a little deeper than usual and faked an outside handoff to the left halfback. He then made a complete spin and drove straight inside the defensive right guard who was cross-blocked out by Mitchell's right guard.

Oklahoma's Double Handoff Play. The defense against Oklahoma that afternoon was an over-shifted six-man line defense. The quarterback faked a handoff to the right halfback hitting inside the defensive guard, and then continued on his way to make a wide handoff to the fullback. The fullback made approximately a two-count head fake to the outside and then drove inside the defensive tackle as the ball was handed to him.

Oklahoma's special plays were rather slow developing, which hints at the talent advantage the Sooners probably had on opponents during this time. When your blockers can hold their blocks forever, or when your guys are faster than the defense, you can be more methodical in your execution.

The Fullback Delayed Buck. The play has all the early elements of a pass. Eligible receivers scatter quickly into the secondary and the quarterback hustles back as if headed for his "pocket." The fullback stands fast. His take-off begins just as the quarterback hands him the ball.

The Statue of Liberty Play. The quarterback races back and makes a delayed fake to the fullback approximately five yards behind the line. The quarterback cocks his arm as if to pass but lowers the ball to a level on which it can be reached by the right halfback.

This wasn't an OU-specific reference, but it's safe to say that OU knows the Statue of Liberty play pretty well.

So here's something funny: Gus Johnson has been a part of so many huge plays on Fox that in my head, he was calling the 2007 Fiesta Bowl, too. He was not.

The End Around Play. The quarterback moves down the line to fake an outside handoff to the right halfback. Instead, he slips the ball forward to the end who has come off the line of scrimmage ahead of the right halfback. This necessitates quickly giving the ball to the end, faking the handoff, an continuing around as in a pitch-out. 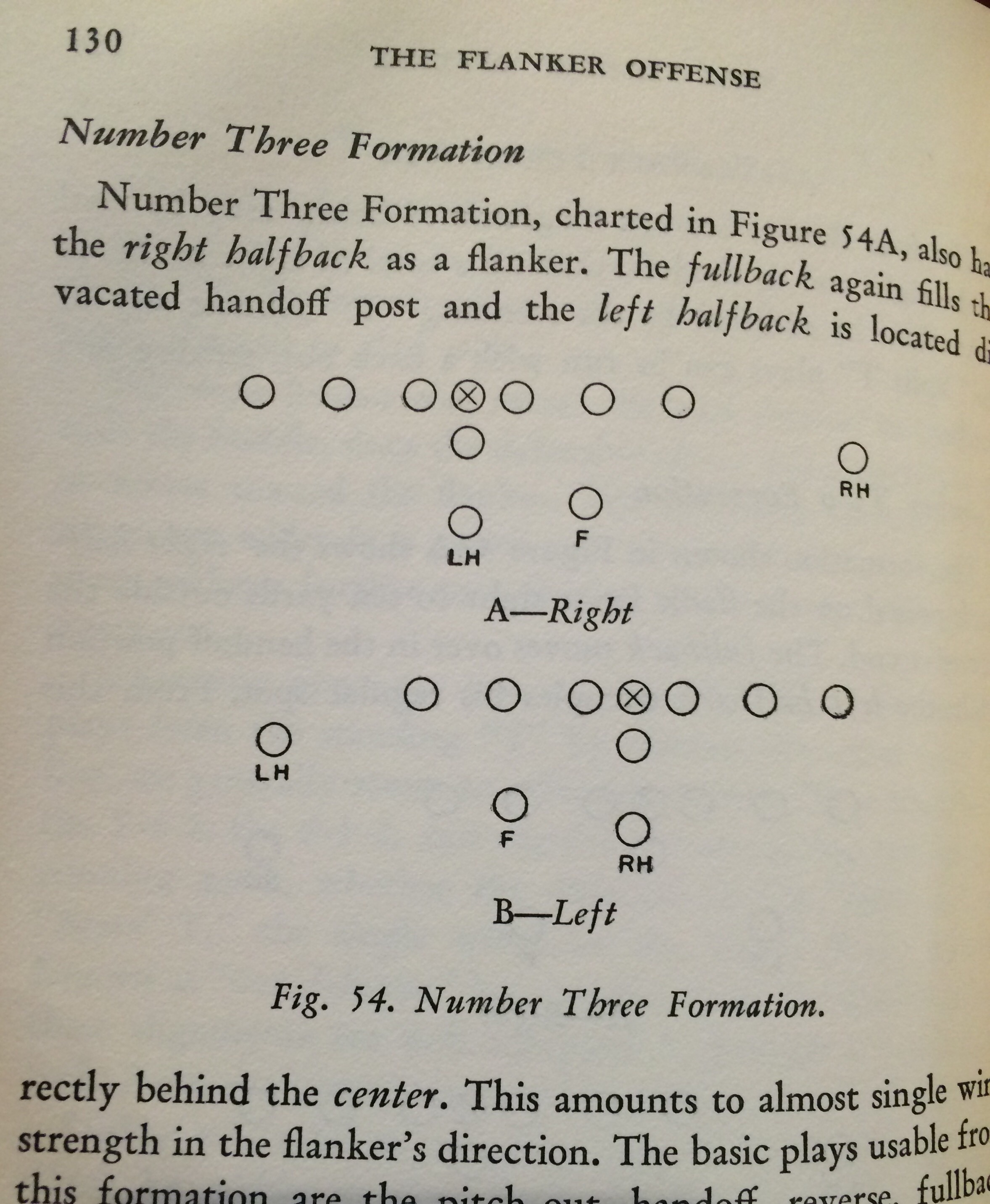 With the playbook possibilities exhausted, Faurot starts to talk about how variations of the Split T can be used to spread defenses out a bit.

When the modern "T" formation came into vogue in 1939 and 1940, almost every play was run with a man-in-motion. After a few years, the man-in-motion ceased to be a novelty. Now the desired result of spreading the offense may be obtained by using a "flanker." This back or end merely goes to either side from the huddle and lines up in his position five yards, or even ten yards, outside his own end. [...]

We use the flanker offense for a number of reasons. It will open a tight defense so that offensive plays can be run more easily. The flanker placed outside a defensive end will usually cause the end to play wide.

The wide flanker also causes the pass defense to open up over the middle, since the defensive safety will generally move or rotate toward the flanker.

Then Faurot types two words you don't necessarily expect to read in 1950:

I had to do a double take. 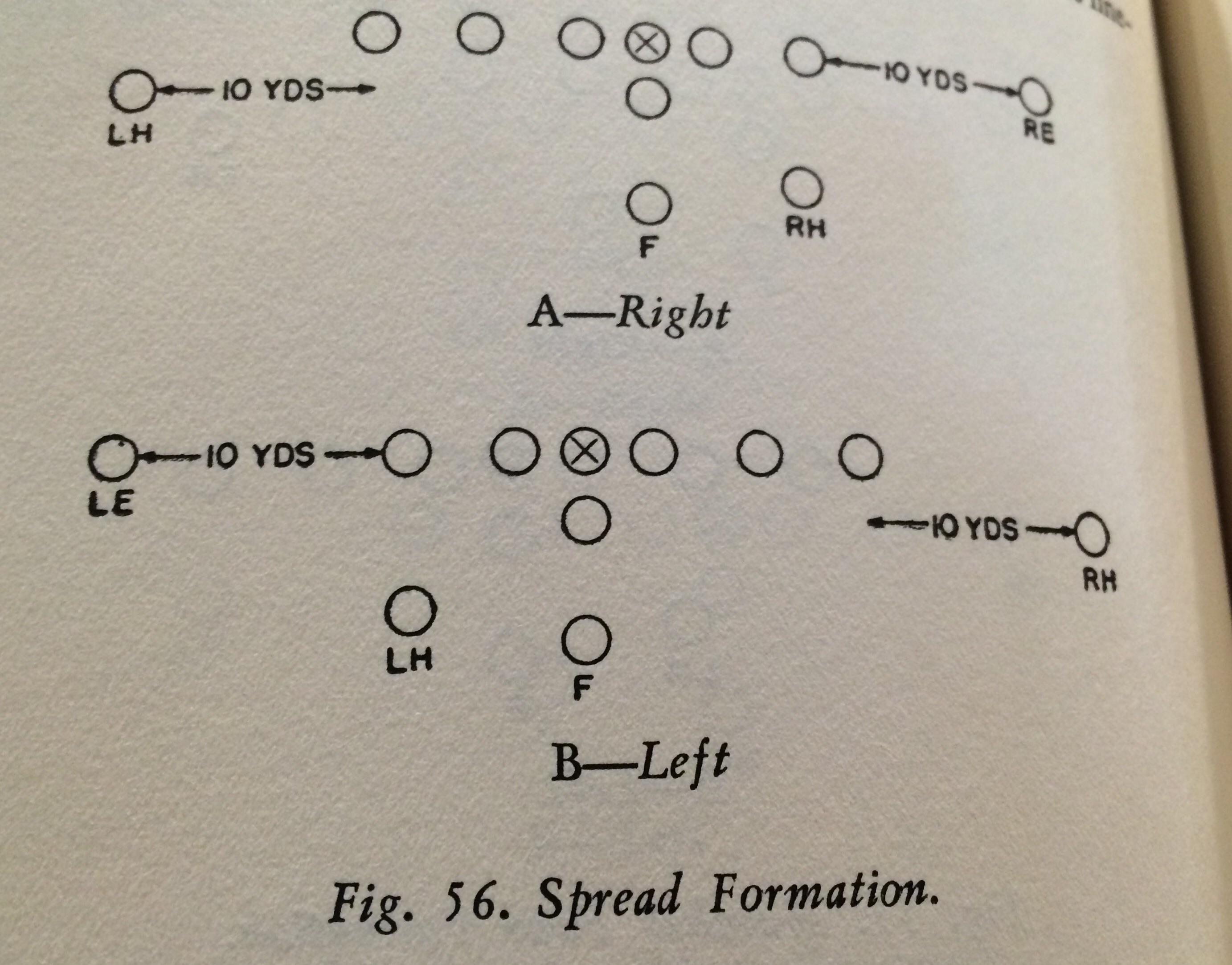 The spread formation sets the right end approximately ten yards away from his tackle. The left half flanks to a position about 10 yards outside and one yard behind the offensive left end. The fullback and the right halfback are in normal position. This widens the defensive halfbacks more than does the single flanker and also uncovers more pass territory. [...]

Since two men on each side are eligible as receivers, these formations are excellent ones from which to pass. Only a limited number of plays can be run with standard blocking. ... If a defense spreads its linebackers to meet the spread formation it will be weaker down the middle.

Again, this book was written in 1950, not 2000. Here's your regular reminder that no ideas are new ideas.

Granted, the use of the word "spread" is relative. He's splitting two players wide of the line, not four or five. Still, his reasons for doing this are exactly the reasons why the coaches moved to more spread-out formations in recent decades -- to stretch the defense out, create stress points, and open up the middle of the field.

Over-use of spreads can interrupt the continuity and effectiveness of the basic plays, but the formation's passing possibilities cannot be ignored.

Okay, so it was still a few decades before someone said "Hey, let's take this gimmick and make it our entire offense," but still. Faurot was a thinker, and he understood the possibilities of both his offense and college football offense in general. That he was also loyal to Missouri kids and local recruiting almost certainly held him back in the 1950s, but there's simply no questioning his eventual impact on this sport.